By now, most of you know I don't celebrate Christmas... But that doesn't mean I can't add a little "winter" decor to my house! It gets kinda boring here in Florida, with no change in scenery except for the increased traffic in town and long lines in the supermarket. Oh, and possums. This time of year, I regularly have to kick a possum off my porch at night.

Anyway, I wanted to do something to make it feel like winter other than run the air conditioning more. Originally, I made my snowflake set to be used as a coaster and doily set for the table. Err... Maybe I should have remembered that Rip van Winkle works with concrete before I made nice white pretty things. They lasted one day on the table before I had to wash them! Instead of letting my snowflakes get ruined, I've decided to re-purpose them into a wall hanging. 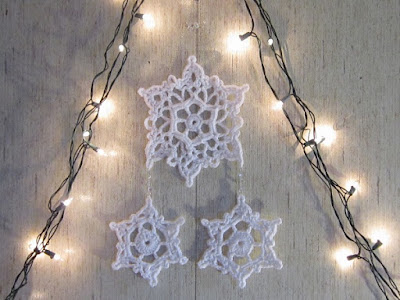 I started out with some jump rings and eye pins. My plan was to use the eye pins to separate the pieces, so they would hang far apart without drooping. It seemed like a good plan to me... However, there was a point during the creation process where the title of this post was going to be "sometimes I feel like an idiot". 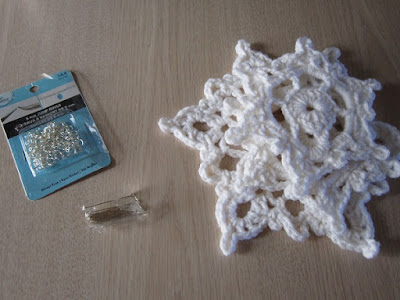 Add some pretty beads to those pins, and I'll have a beautiful, sparkling snowflake decoration in no time. Right? Yeah, right. 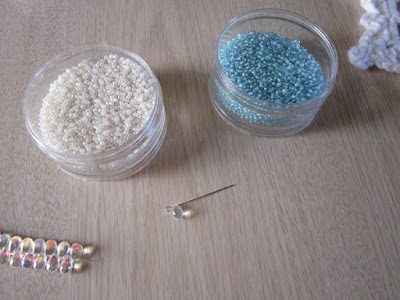 I almost chucked this whole project out the door. Between the frustration I went through putting it together and the problems my camera was giving me, I was about to give up. But I took a deep breath and tried again (and again, and again), and I finally made it right. I even dug some lights out of the closet I've been cleaning, and decided to add them to the wall instead of throwing them out like I planned. For some reason they're joined in a loop, so I was trying to spread them out across the whole wall. In the rest of the pictures, I had looped them multiple times around the decoration, and I think it looks better than this: 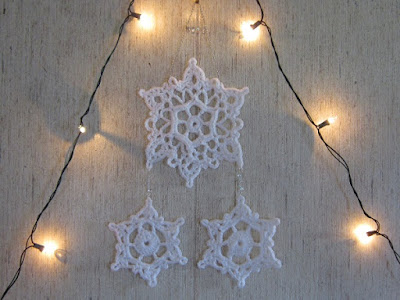 Now, do you care to go on a little adventure with me? I could have avoided the problems I faced had I used starch or glue to stiffen the pieces, but I wanted to leave them the way they are... Just in case I can use them on the table sometime in the future. Here's how I put it all together, including all the mistakes I made.


Mistake 1:
I placed some beads on the eye pin, alternating the teardrop-shaped and small glass beads. I put four big teardrop beads and nine small beads on the first pin, planning to use that as a "spacer" between the small snowflakes. I had an extremely difficult time closing the pin because I didn't leave much room to work with. It took ten minutes to close the pin, and it was a major time-waster. I should have taken some beads off, but I had bent the pin so I couldn't remove them anymore. Figuring the beads are too pretty to waste, I fought with it until I made it work. 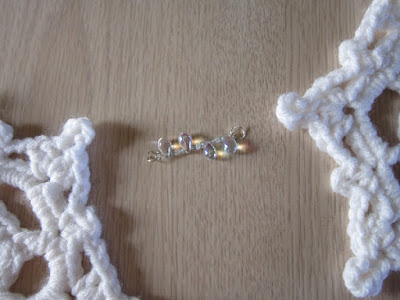 Mistake 2:
I thought adding the jump rings to the back loop of a chain space would give them a nice pointy shape. This later proved to be unstable, and only pulled a giant loop out of the stitch. 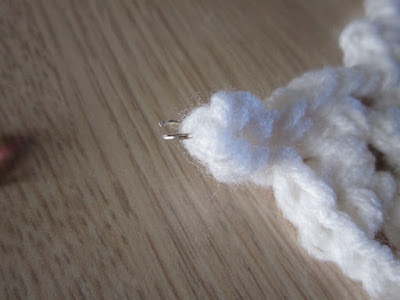 It doesn't look so bad sitting on a table, does it? Once I hung the "finished" piece up, it turned into a disaster. 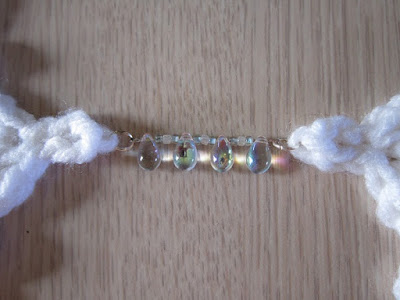 Mistake 3:
Genius that I am, I decided to put less beads on the next pins. (At least that was a good idea!) Finding them easier to close, I made more to use as spacers between the large snowflake and the small ones. However, I only used one jump ring on each side to attach them, and it pulled the pins too close to the pieces. 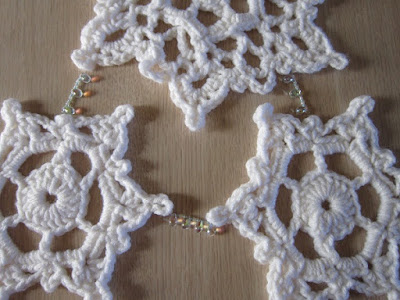 Adding another jump ring to each pin was all had to do to fix mistake #3. It provided a little space between the pieces and allowed the pin to rotate a bit. 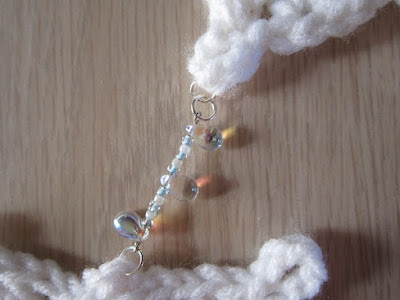 Back to more mistakes (please let's stop counting them all)...
Somewhere along the line, I changed my mind and thought the piece looked better upside-down. Well, at this stage, I can make it hang whatever way I want, right? 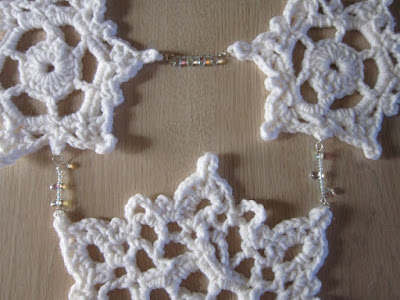 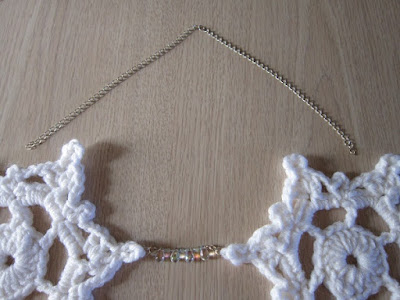 Wait, wait... First, remember the display photos of how the project turned out? Let me remind you before I show you the disaster this thing almost was: 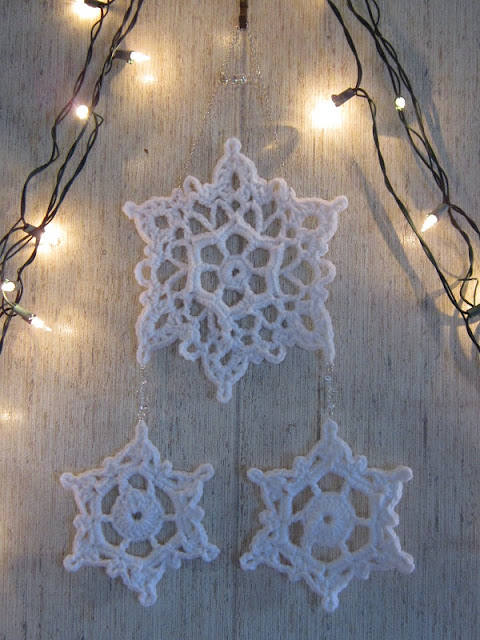 Okay, I feel better now. So, you're probably thinking I'm overreacting. It's not so bad, right? Maybe it could use a few more sparkles or some color, but it's not a failure... Oh, but that final result is only after THIS: 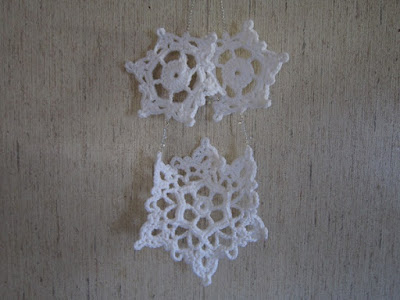 Ha ha ha! All I could do was laugh when I hung it up. My idea that was so great on the table was a total failure on the wall! What happened to my "spacer" pin? And why does the big snowflake hang straight from one point, but curls under its weight from two? Such a catastrophe! How can I call myself a crafter?


I spent twenty minutes vaping and deciding I hate winter. I don't need to decorate. Snowflakes are stupid, anyway. Then I calmed down and set my mind to making it right. The first thing to do was flip it all over: 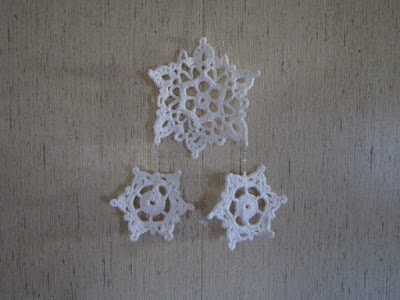 That was better, but that spacer pin still wasn't acting like a spacer. It was acting more like a pain in my... Fingers, because that's what I'm using to open and close all these jump rings. 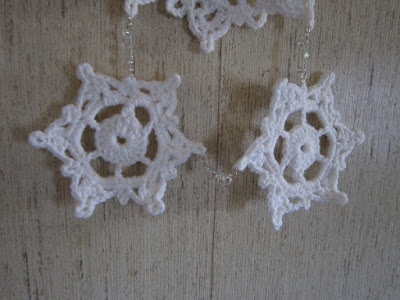 Another genius idea: I thought if the "spacer" wouldn't push the pieces apart, then I'd hang it at the bottom where it can dangle and be pretty. I moved it down to the lower points of the small snowflakes. I don't know why I figured that would be a better place, since those spaces are even farther apart than the points in the middle. 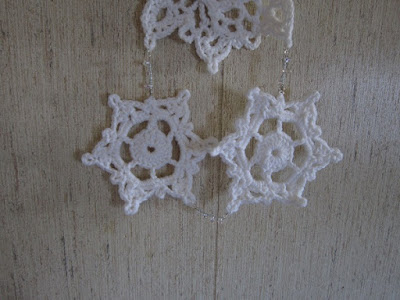 Ah ha! So I turned the small snowflakes so their tallest points are in line with the spaces of the big snowflake. Success! The whole jumble hung a lot less like a mess, and more like something made by someone older than ten. 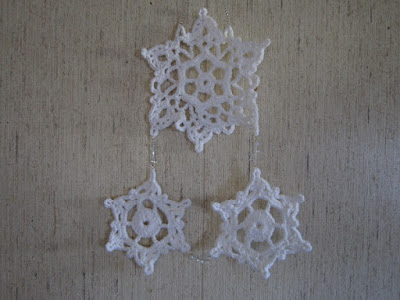 But that spacer pin... Ugh, it was still looking out-of-place to me. After this latest trial, I noticed that the big snowflake still wanted to flop inwards a bit. I decided to use the pin to add a little sparkle, and hopefully some space the hanging chain. 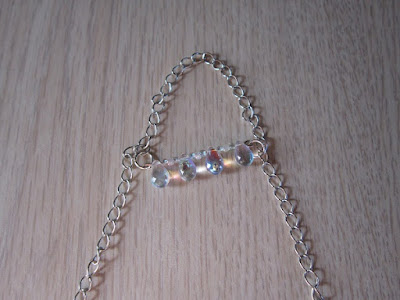 Even more success! Now the two small snowflakes could hang freely. Satisfied but still wanting to dress it up more, I tried adding some teardrop beads to a few jump rings, and I was going to hang them from the lower points of all the snowflakes. I succeed in shattering my beads when I closed the rings. 😞 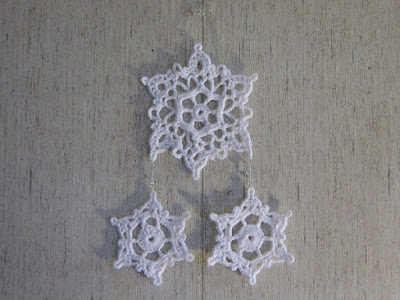 While hanging my lights, I noticed another spot that could be improved: By moving the hanging chain over to the smaller chain spaces farther from the point, I eliminated the small amount of drooping that was still a problem on the big snowflake. 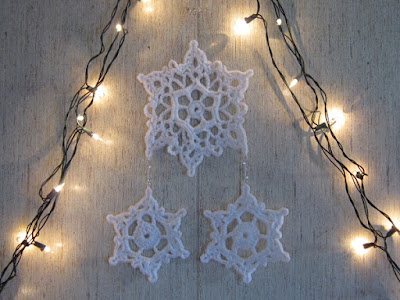 Adding glitter glue was a thought, but I hate working with glitter as much as I hate winter. Somehow I always end up cleaning up more glitter than goes on a project. Maybe I'll figure out a way to add those dangling beads to the bottom points... Maybe not. Either way, I'm satisfied enough with it. I heard the temperature was supposed to hit a low of 60° tonight. Perhaps I should open the windows and sip some hot cocoa while staring at my winter wall. It's as close to seeing snow as I ever want to get.