My resolution to get my pile of WIP's off the couch was no empty promise... I've been cleaning / trying to remember why I started that project / finding more yarn / FINISHING things! This is the cowl I was working on in the post "Stay Out of my Stash": 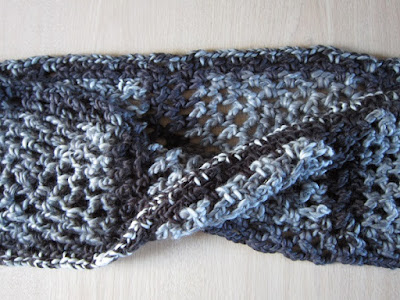 It's been buried on the couch, still needing a few ends woven in. I'm so unhappy with the almost-finished project that I considered throwing it away without finishing it. I loved the square I used so much, and I was eager to share the pattern... But the yarn I chose turned out to be a bad decision. What had been a cool design on paper and in worsted weight yarn became an uneven, puckering mess when made with Facets by Loops & Threads.

I wanted to further put this yarn to the test, so I didn't throw the project away after all. Perhaps you can see in the first photo how uneven the edges look. My idea of being able to wear it long won't work. Where I thought the project would have lovely drape, it just stretches out of shape. However, it seems like it doesn't look so bad doubled over. Possibly even stylish with a jacket... And there's some cold weather coming for me to test out the warmth of this chunky yarn. 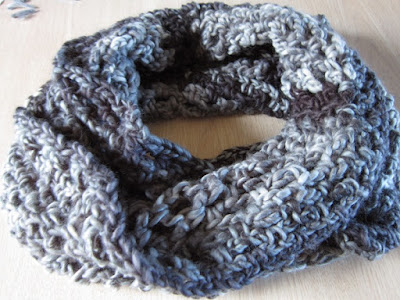 BUT. (There's a big "but" here.) The picture above was taken before it got a bath. Let's talk about that testing: The trouble I had with the yarn coming apart while working made me suspicious that it won't hold up to much washing. After just one gentle hand-wash in the sink, I think it's safe to say my theory was correct: 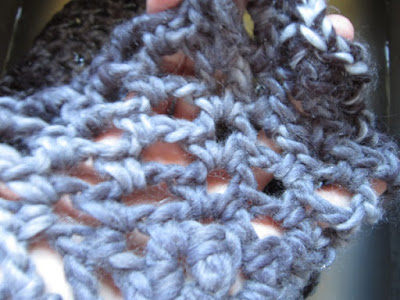 The photo above shows the cowl just after wetting it - No agitation yet and just cold water. The fuzzy "halo" of the chunky yarn became a matted mess of cobwebs between the lace. 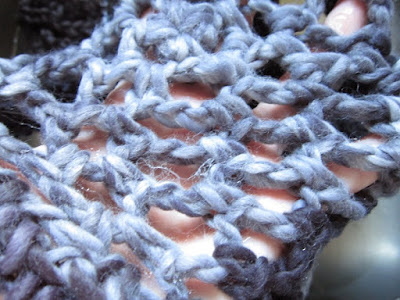 ...And after just a few gentle "swishes" back and forth, those cobwebs became the tangled mess you see above. How horrible would it be if this piece accidentally found its way into the washing machine? Oh! And what if it then made the trip to the dryer?? I'm not willing to risk it with this project. Not yet. I've had some acrylic yarns that make it through the wash fine, despite the label saying "hand-wash only". I don't have any expectations of that happening with this yarn. 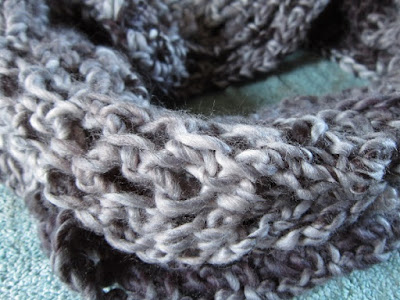 To be fair, I took the final picture after it was dried. The tangled mess fluffed back up a bit, but this cowl already looks worse than a well-worn sweater. The yarn is soft and warm, which makes the end result a big disappointment. With the awesome color play throughout the ball and the diamond texture of the squares, I had hopes that this would end up being my new favorite piece... And a big hit as a free pattern. Now all I have is a desire to make it again with a different yarn. Until then, I'll see if I can enjoy my cowl until it falls apart, and when I try again it will just be more