Stay Out of My Stash

A few posts ago, I told you I would be doing some research on one of my new yarns. My research is done, and I found... Almost nothing that I didn't already know. Well, when you can't gain knowledge through investigation, it's time to turn to experimentation!


The post I mentioned was the one where I was fed up with all the knots I've been finding, and the yarn I was supposed to research is Facets by Loops & Threads. From the label, I know it's 100% acrylic, bulky weight (5), 120 yds / 3.5 oz (110 m / 100 g). I was hoping to find information about how it was spun, but all I could find was a bland and somewhat redundant description about the projects you can make with all the colors of this yarn. So, let's pick up with that knot I was avoiding, and go find out about it for ourselves... 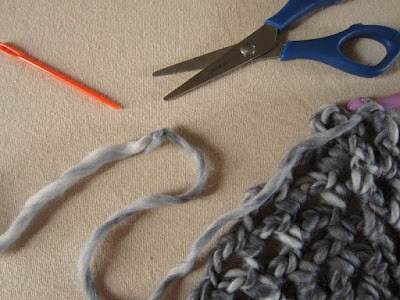 Is it plied? Is it a loosely spun single? Is the wrap and weight supposed to vary, or did I get a defective ball of yarn? Although I couldn't find the answers to those questions from the company's description, I found some clues in the customer review section. Some are more than happy with their purchases, but one mentioned having the same problem as me, and even worse.


I considered contacting the company, but I'll explain more about that later... For now, I just want to finish my project! So, I'm going to attempt to cut and repair my "mystery" yarn, and just hope that it will work. I know, I know... Nobody wants to see me do another Russian Join, right? But I'm grabbing the camera anyway, because I have hopes that maybe some yarn junkies or spinners out there can help me affirm my guesses. 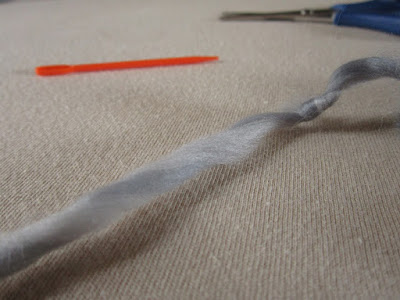 I'm pretty positive that I have it right about it being a loosely-spun single. When you hit one of the two-color sections of the yarn, it really looks plied at first. But once you reach a single-colored, extra-loosely-spun part, it seems to obviously be a single. And I've never done a Russian Join on a single, so I'm both excited and scared to move on... 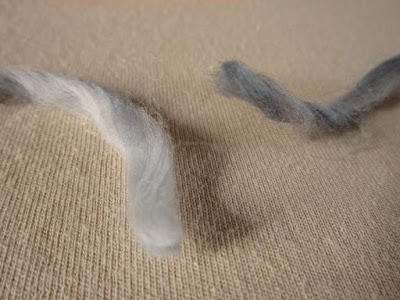 It's a single ply, right? The very loose parts will pull apart with the slightest tension, so there's no way this could be plied. Anyway, once you cut it, it very clearly looks like a single. I procrastinated a bit by searching "Russian Join on single ply", but I came up with nothing. Well, there isn't much left to do other than get the needle and try!

Yuck. That is one of the worst Russian Joins I've ever made. So, this is where that little trick I taught you comes into play! Twist, untwist, twist... Untwist, twist some more... Huh. I think it might have looked better before I did that. 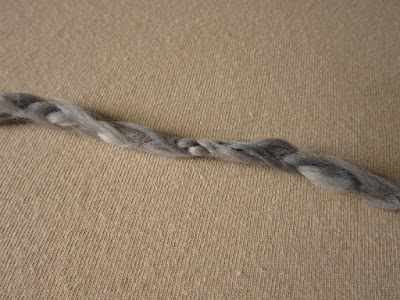 But... The Russian Join worked! (Sure looks horrible, but it worked!) I grabbed the hook and got back to my project. Although that join looks terrible by itself, I thought it looked pretty normal once I worked it up: 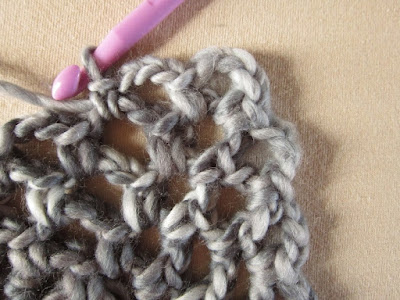 The spot I repaired shows more than the typical Russian Join, but the thickness of this yarn alternates anyways. If you have worked with Facets already, I would love to hear if you had the same experience with yours. Although it adds character to the yarn, I'm not sure if I like this effect making the edges of my squares all wobbly.


I needed to stretch this yarn as far as possible to complete my project. Plus, I'm making squares (duh)! Do you think I want one more end to weave in? I'm glad the Russian Join worked, pretty or not. After repairing the knot and finishing that square, I had less than half a ball left. 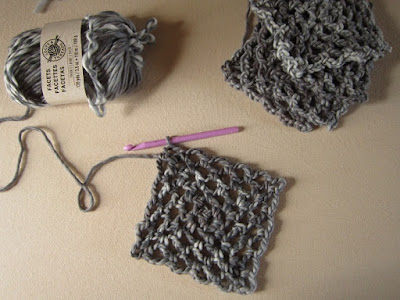 I was able to finish off the rest of that skein without another knot. Yay! I really do love watching the colors as they run out of the ball, because this is one of those yarns that will surprise you. (Which can be not-good if you have a plan!) But I was a little disappointed when my project was finished without working much of the lighter part of the yarn in: 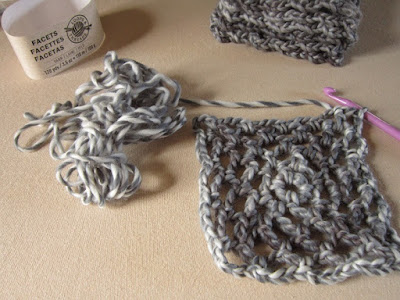 I really like that part of it, and I wish I had worked squares from both ends of the ball to incorporate it. I made a mistake on that last square, too, so more could have been in it - I skipped a stitch in the corner, and I didn't find it until after I cut the yarn. It's something I can easily fudge in the joining process, so I'm not going back to fix it.


Ah, joining! That thing that means your project will soon be done... That moment your pieces begin to become part of a whole... Some crocheters love it, some hate it, and some are just indifferent - It's just part of the project. after all. As long as I can use the one-seam method, I don't mind it. And I was once again enjoying the color play of my yarn while I began joining my squares, then... 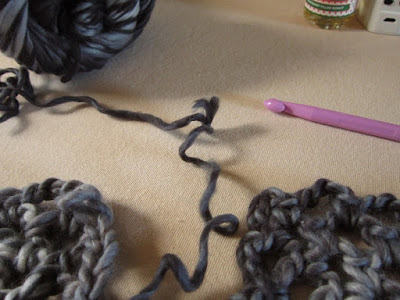 Oh, come on, you have got to be kidding me! I'll admit that the hook isn't in my project because I hurled it all down when I found another knot. It's also a good thing that cats don't understand English (do they?) and nobody else was here to be offended by what was coming out of my mouth. I threw a bit of a temper tantrum and cussed up a storm while I snapped a quick photo for more proof of this craziness. But in the end, I calmed down, grabbed a needle, and made another Russian Join in another ball of yarn. 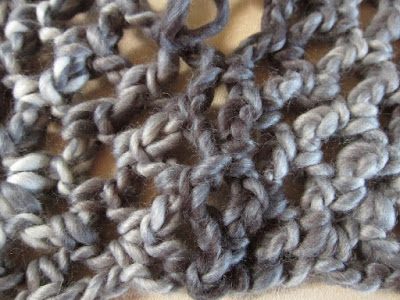 From farther away, you really can't tell a difference. The varying thickness of this yarn does hide its own imperfections and my mistakes. But up close, I think it looks horrible. I can see where the yarn was woven together, and the seam puckers up a tiny bit in that spot. Since I'm confident that it blends in when the project is worn, I'm leaving it. I'll still always know right where that repair is, though. Can you spot it?


Now, about contacting the company: I decided not to, but I will leave a customer review on their site. Although I wanted more information about this yarn at first, I'm no longer interested and that would be a waste of both my time and theirs. Why? Because they know their yarn is like this. Somebody had to tie those knots in there. This isn't a case where the yarn ran out while winding a ball; it's just yarn that's delicately spun and likes to come apart.


Facets yarn is available in a range of beautiful colors that will catch your eye, and it's one of the softest acrylics I've ever felt. Those are the two reasons I purchased it on an impulse, and those are the two main things you'll read about in most of the positive reviews. It has potential to create amazing projects, but it's not for me. If the manufacturer ever puts a little extra twist into this yarn to stop the breakage, I would love to work with it again. Until then, this yarn can stay out of my stash. If I find one more ball with a knot tied in it, you might find me tied up in a straight jacket.