I am so happy with the re-design of my latest shawl, but I hit a point of uncertainty with the last row... The problem is, I like how it looks when flat, but I'm not sure about when it's worn. I decided to do my best at modeling it, so I could ask for some opinions about it. I wasn't terribly successful and ended up getting a laugh more often than a usable photo.


The good news is: I made up my mind while taking the pictures, so now I don't have to beg for opinions. The other good news is: I'm going to let all of you laugh at my ridiculous attempt at being the model. And don't try to make me feel better!... I'm having too much fun laughing. More good news is: I'm not ripping it back - It's done! There is no bad news: Just bad modeling. 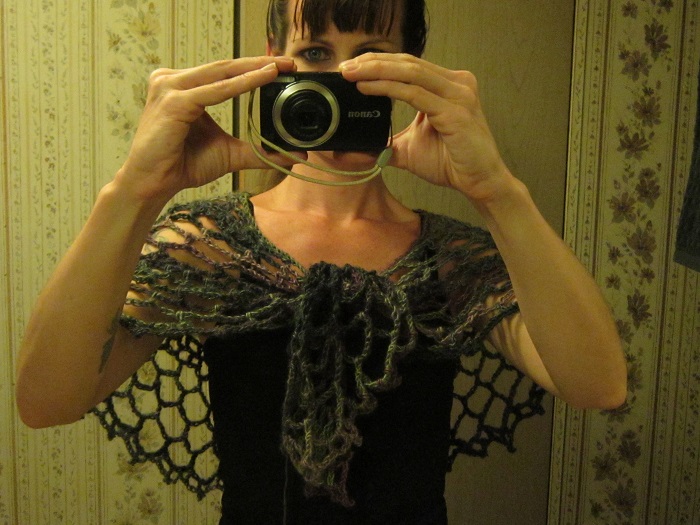 With the last row's stitches not bound off yet, I stuffed the yarn ball in my pocket and set to getting that usable photo... Which leaves me stuck using the bathroom mirror, so I hope you enjoy my ugly wall paper. Since it's from the 80's, let's call it "almost vintage". Why am I taking pictures in a mirror when I have a smart phone with a front-facing camera? Because I can't fit the whole shawl in the frame, and there's not enough light. 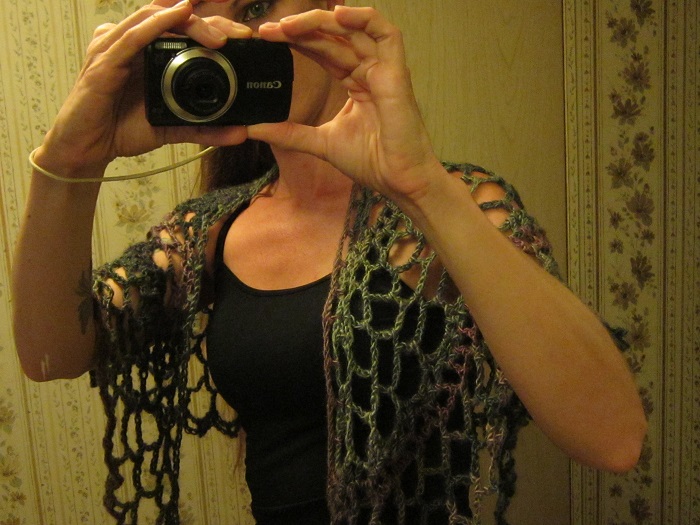 I'm not a selfie-taker. I'm awkward. I'm known for having bad posture, standing in weird positions, and making strange faces. But hey, you can still get an idea of how awesome that shawl is, right? After reviewing the photos, I realized that I can't hate the last row - It just needs some blocking! 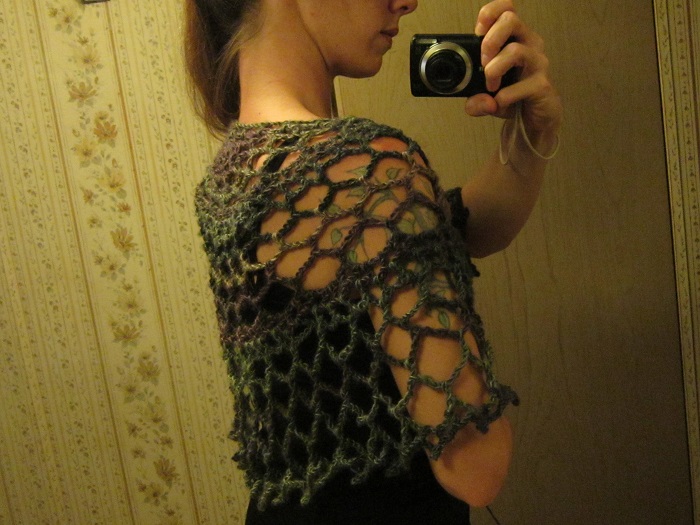 30 minutes later, I had those few semi-usable pics. But I didn't need them for opinions anymore! I'm happy with the shawl; I know what needs to be done to make it right. And that's when I remembered that I have a tripod, and my camera can be set to take multiple photos. Oh, why didn't I think of that before?


Just one more thing to do before I bind off: I think I'll try blocking it beforehand, to make sure that will fix it. But first, I have to redo the stitches I ripped out while playing dummy. Do you know a locking stitch marker is a great tool for saving active stitches from undoing? And wouldn't you know that I skipped that step, because it would be okay.
Fixed, blocked, and... 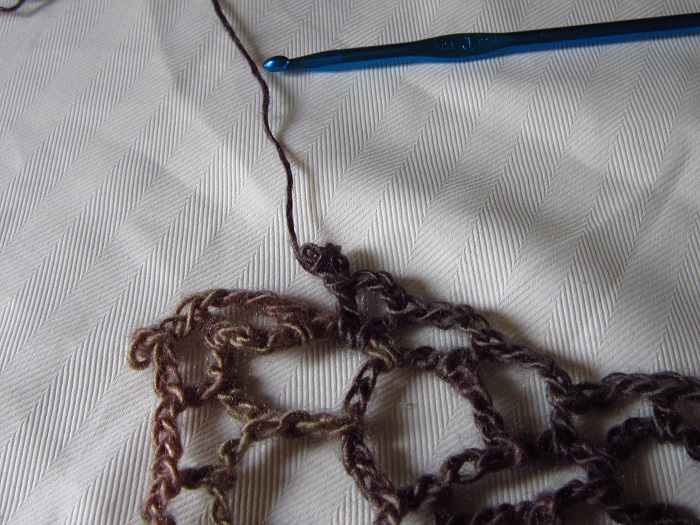 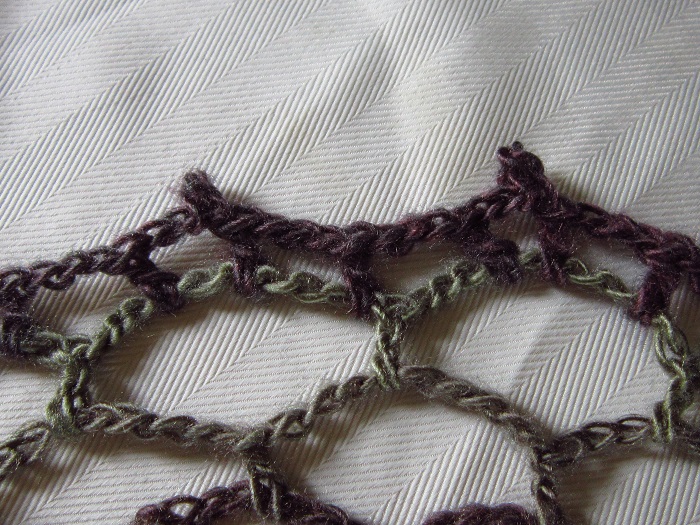 Success! Yay, happy dance! While it was blocking, I thought I would give that tripod a try, and attempted to get photos of my other shawl that still needs pictures before the pattern can be published. It further proved I need a dummy... 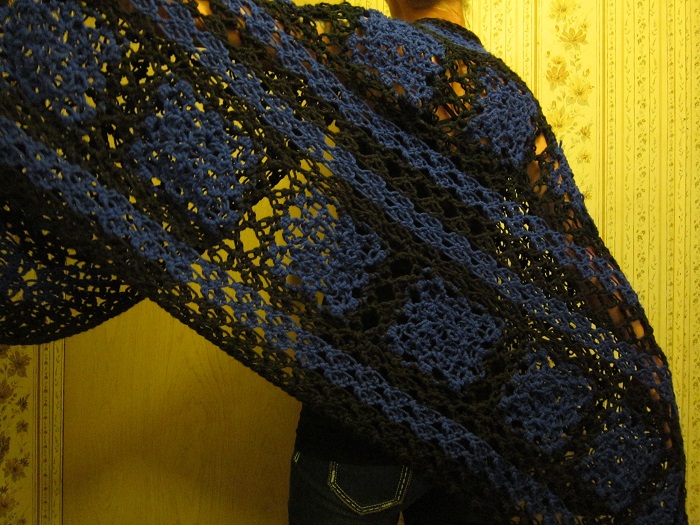 Okay, that's an okay pic, right? You can kind of see the shawl... 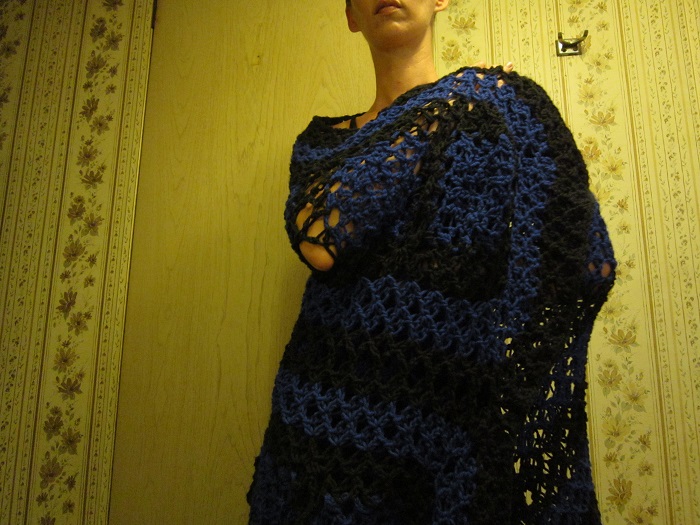 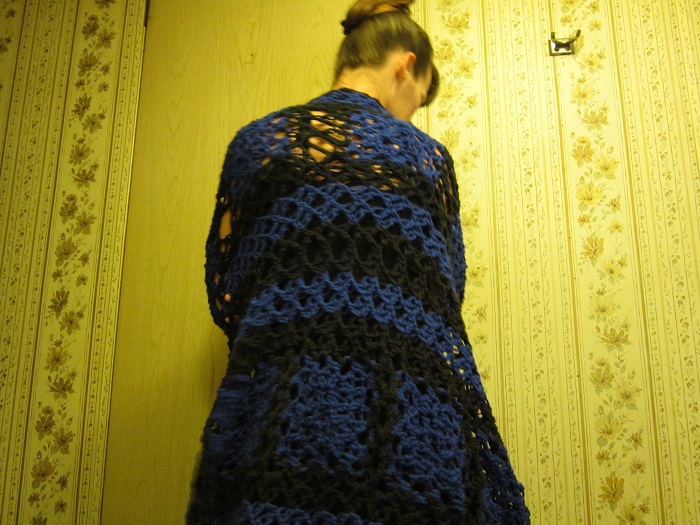 And where, oh where did that big butt come from? That's when I realized that my tripod was too low, and bad angles can make this size-0 butt look big. 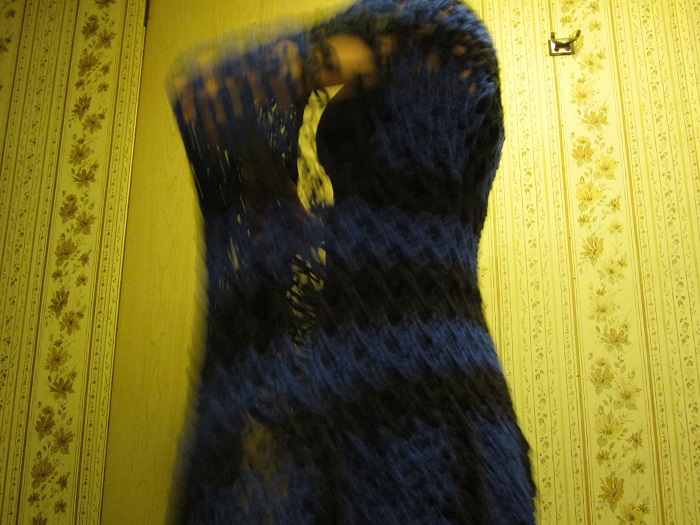 Oh, I'm so ashamed of my "big butt" that I'm going to hide now... Lol, not really. It's so strange how this photo came out, with parts of me and the shawl disappearing. Maybe I need to set the automatic timer up, so I don't get weird photos like that. 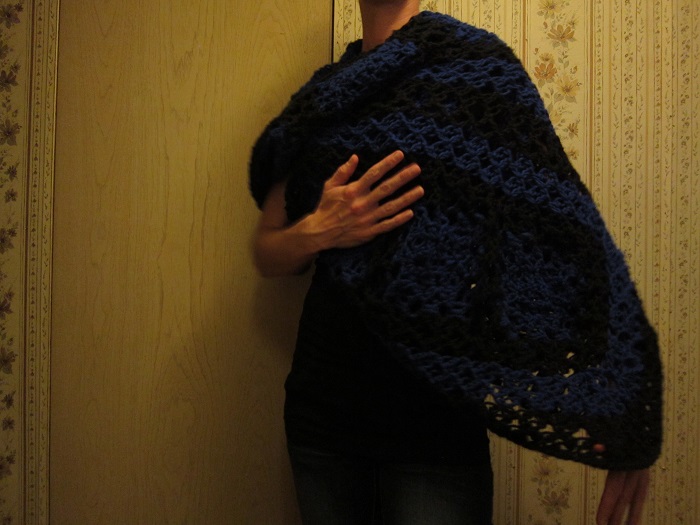 Adjusted at a better angle! But, what is that? A self-exam? Reciting the pledge? I pledge allegiance to my boob? 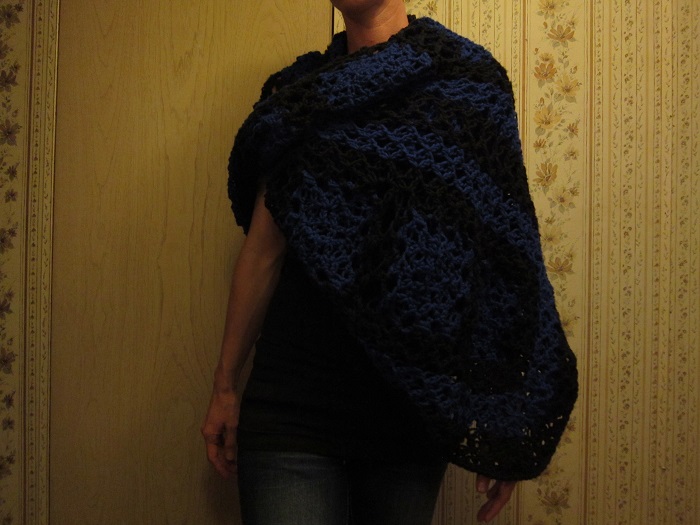 That's better! But, too dark. What happened to the light when I adjusted my angle? 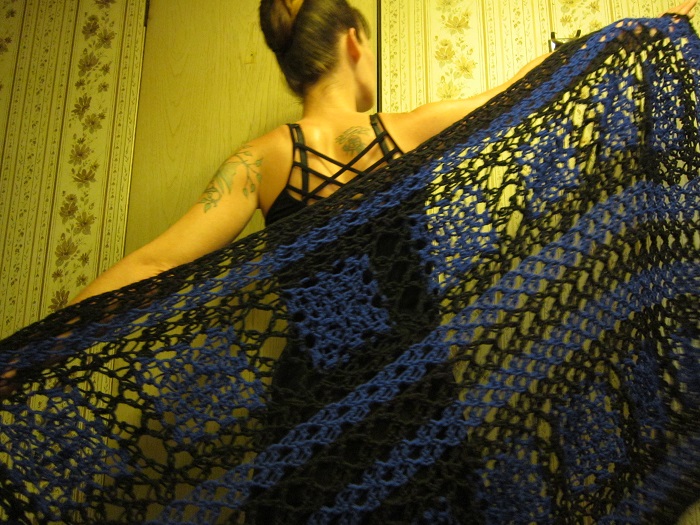 Turn the light setting up and... Yay, check out some of my tattoos while I only show you half of the shawl! Arg, the tripod slipped back to a lower position again. 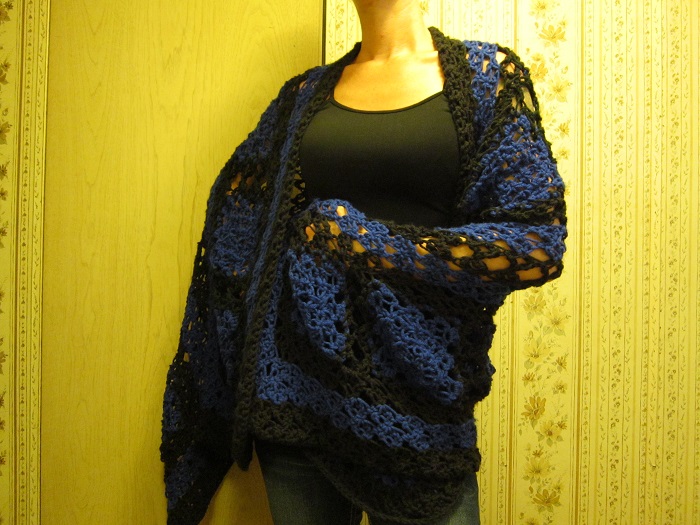 Mannequin-worthy stiff pose that still doesn't show off the pattern... Hey, let's scrunch it all up so nobody can see the design! 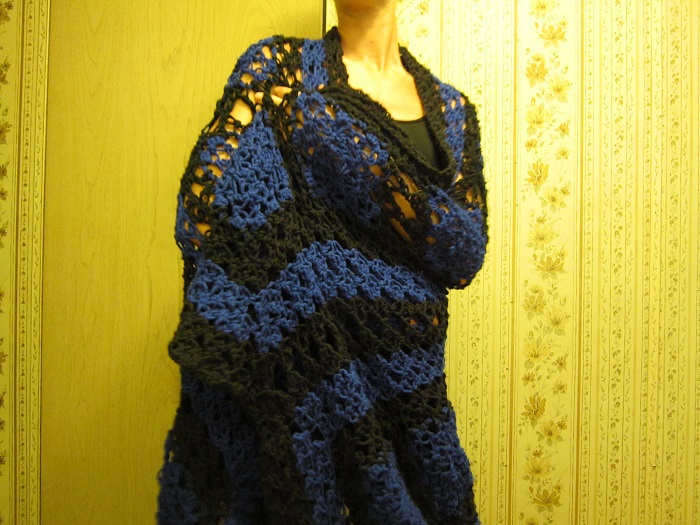 A little better, but still doesn't show the project well enough. Are shawls really this hard to wear, or am I just that awkward? C'mon, girl, get it together! 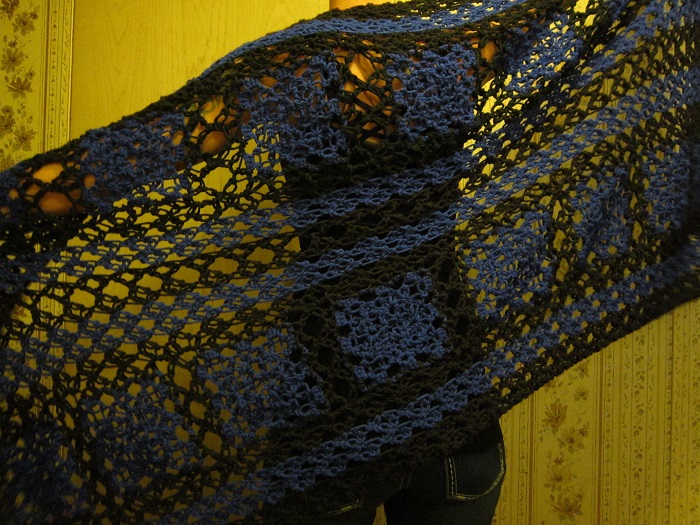 Much, much better. Held up, properly displayed, but with the edges cut off. I know I'll need to take it outside to get farther from the camera. At least I have an idea of a pose that will show it off well if needed... 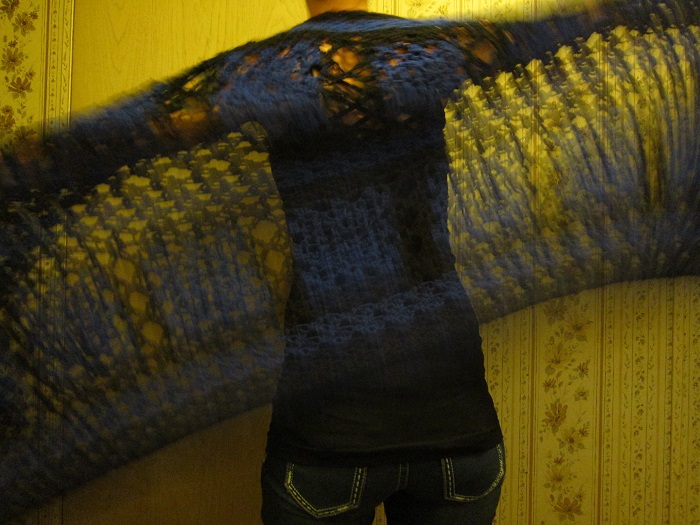 And now I shall fly away like my faeries!


It's a fact: I need a dummy. When I asked The Other Half if he could help me get some not-ridiculous photos, I received a strange stare as a response. I'll either take that as a "no", or as a clue that such a thing doesn't exist. I guess every picture doesn't have to be perfect, but I want them to be better than this. At least I had fun, and I hope you did, too. Let another dummy model these worsted-weight projects in the 100-degree Florida heat. After reviewing this post, I think I might have fried my brain while trying.

PS: Do any of you have some Pinterest boards or something with style tips? All I have/wear/need/want is tank tops and jeans! What would you wear with shawls like these?

I shared a bit of my craziness design process in the last post, and I'm back with an update. Even though I need to be finishing that stitch tutorial I started, despite having a pile of WIP's, instead of publishing two patterns that are waiting, and against my promise of no new projects, I can't stop hooking up designs with the Boutique Unforgettable that I picked up.


I can't help it. At first, the color called to me and I couldn't wait to work with new yarn. Once I started, I couldn't stop. Idea after idea rolled out of my mind, so quickly that I can't really keep up with them. But one main thing is sticking in my brain: Each new color I work with is inspiring a story as I daydream over the changing shades. So even though that last design was pretty, it didn't fit in with my story... Ripping back was needed, and I'm happy with the results. 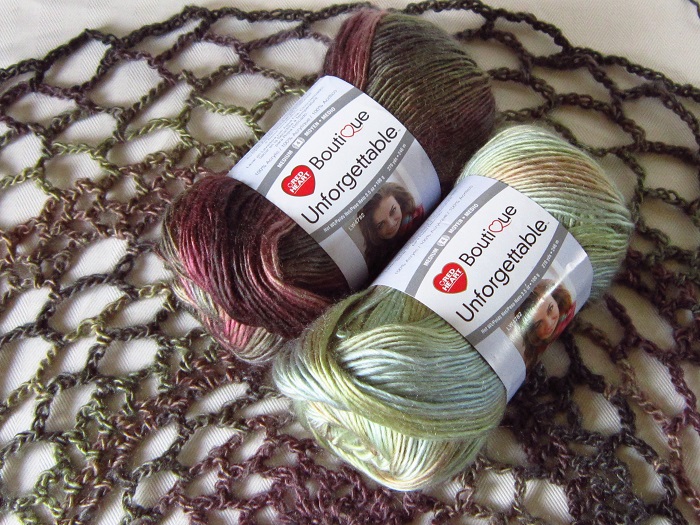 So, does that prove how weird I am? Yarn colors have re-ignited my old passion for writing fiction, and I've been daydreaming up plots while I crochet. I don't know what made the gears turn in that direction, but the machine is running and I can't stop it. Strange or not, I want to write out the stories that have been forming through the design process, and publish them along with the patterns.


It's not a new idea - I've seen novels that include craft projects or recipes along with the read - But I think mine will just be simple, short stories for the crocheter to get a glimpse at what inspired the design. Again, maybe not a new idea, but a format I haven't seen yet. 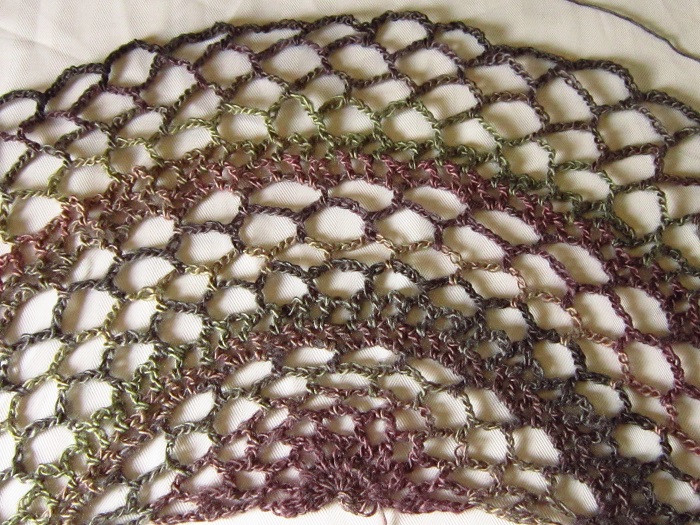 Maybe when most people look at that design, they see color-changing lace. I see the story that I was daydreaming up; each row a mathematical equation with a reason behind it. Maybe it's a bit of craziness, but it's crazy-cool to me. This is the reason why I don't need to watch television.


Now, I'll stop rambling about the inner workings of my brain, and just get back to a simple crochet topic. Ooo, pretty colors, finally in the places I want them! Adjusting the stitch count and length of the rows stretched those color changes out just the way I hoped. And look how far I got with all that yarn left over! No second skein needed. 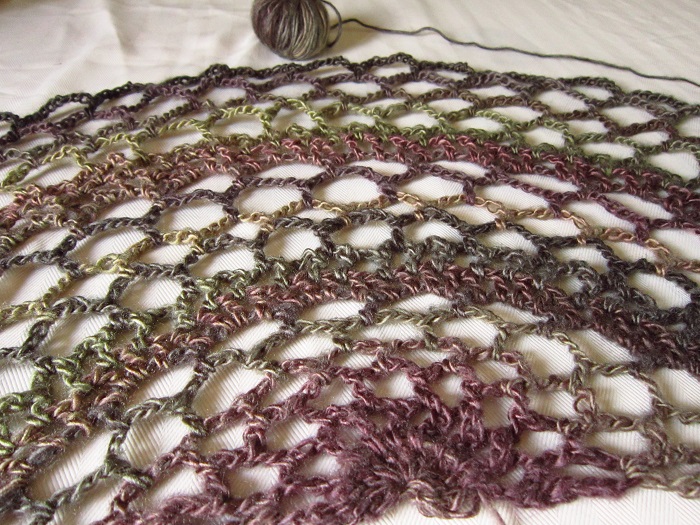 It's still a work in progress at this point, but I think I'm on my final row. Maybe I'll make a border up the sides; maybe I won't. Right now, I'm stuck on how I want to end that last row. You know that mathematical equation I mentioned? It worked for the increasing rows, but I can't get it to work out right for an edging. So I'm playing around with different counts that fit into the story: 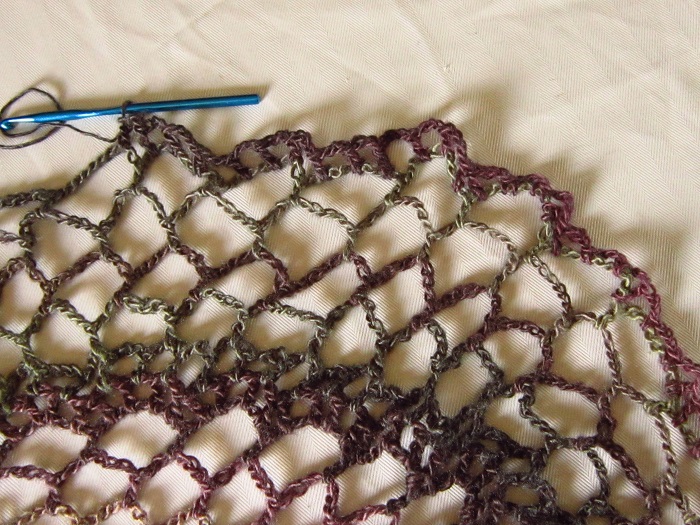 And then it will be done! Well, wait; no it won't be done, because I still have to write the story to go with it. And there's always the weaving of the ends, which my brain loves to skip. Oh, forget all that and just have another pretty picture of this project: 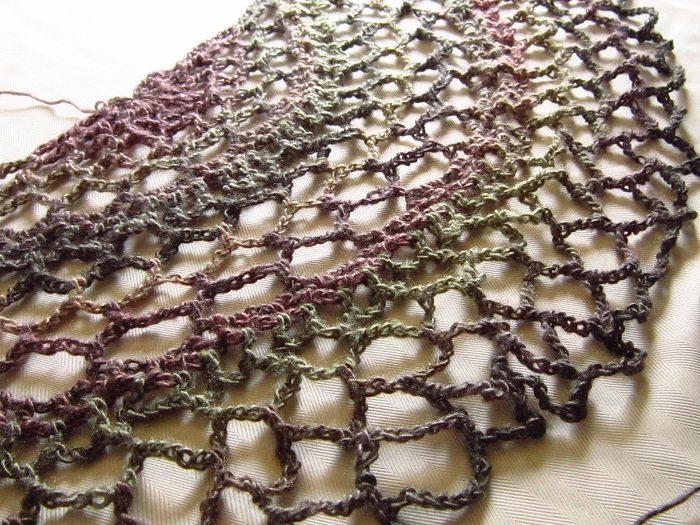 And then I'll need to get a dummy to put this on for some display pics, unless I can get The Other Half to help with me as the dummy... But ugh, I hate modeling things. I know one thing for sure: This beautiful design deserves more than being draped over a table: 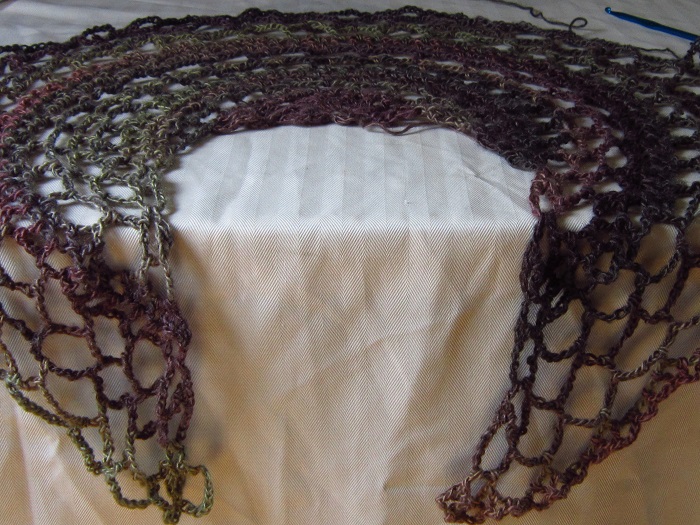 But I think that gives you an idea of how it will look when worn. Except, people's backs aren't flat like a table... Oh, what a mess! My brain decided to spit out all this wonderful goodness, and I don't have the means to display it properly! I'm just going to calm down, go play with pretty yarn, and worry about that later. I don't want to get too distracted and miss my date with those fairies in the woods.


And then I'll have to turn everything into a PDF, remember how to use Ravelry, and promote the pattern. I might be taking some more breaks in the future, so that I don't get overloaded with the extra work. I guess I can't complain about finally getting over that designer's block, but I don't know why it had to happen in such a rush.