I Think I Broke It


Before I make my confession, I should defend that I am still making progress on that elephant rug... But I definitely broke my promise of no new projects. I think it's good to have a small side-project to work on when you're making something big, and I have plenty of them that I could be finishing. I couldn't resist the skein of Red Heart Boutique Unforgettable that's been beckoning to me, and I found myself hooking up a design. Sorry.


I don't know, should I be apologizing? Here are my justifications: 1) All of my promised projects for The Kid are on hold because of the rug. She came up with this idea and helped make decisions about how it should look. 2) Could you resist that yarn? And 3) IT'S DONE ALREADY! 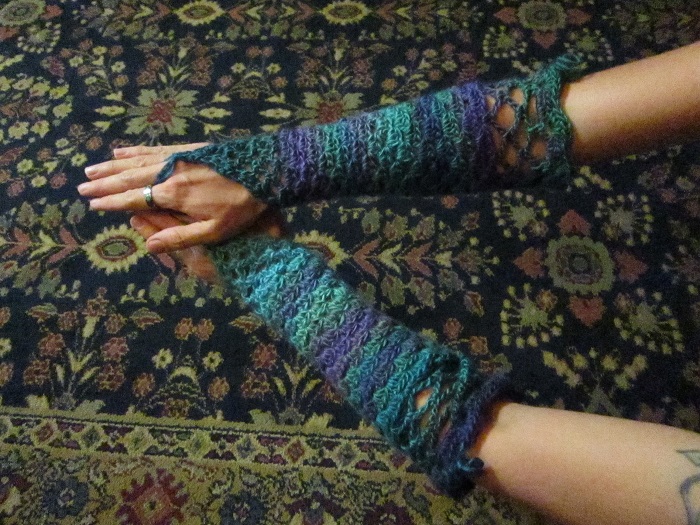 Okay, I lost my last yarn needle again, so I'm hiding some ends that need to be woven in. I can't call it completely done yet. But the pattern is written, and more ideas are on the way. This design is going to be for sale, and we'll see what happens with the rest of those ideas. I still have this much of the skein left to make something else: 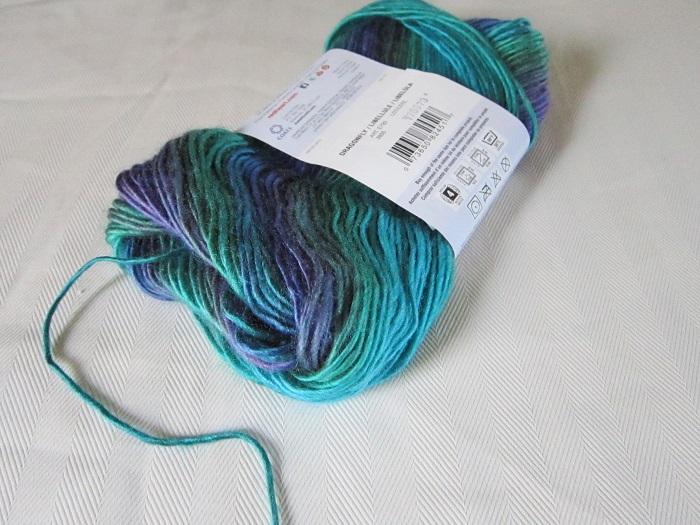 I have so many ideas, but only one ounce of yarn left! I wish I could buy more, but I gave my word to not buy more yarn, along with the no-new-WIP promise that I already broke. I planned on making a small accessory like some boot cuffs to match, and being done with my ideas for a while. Then, The Other Half tested my strength. Yesterday he comes home and asks me:


Do you want to go to Michaels?


He needs a wooden box with a lid for a stereo that's going in his work truck. I don't understand it, and I'm not going to bother asking. I slipped on my nice shoes, thinking that the yard had mostly dried out after a few days of no rain - the walking catfish have gone and only one corner of the yard contains minnows. I managed to find a puddle anyways. So with wet feet and platform sandals, I stepped onto the bumpy concrete of the driveway to close the gate as we left. As I turned around after locking it, my foot and my shoe went two opposite directions, and I almost went face-first into the back of the car. 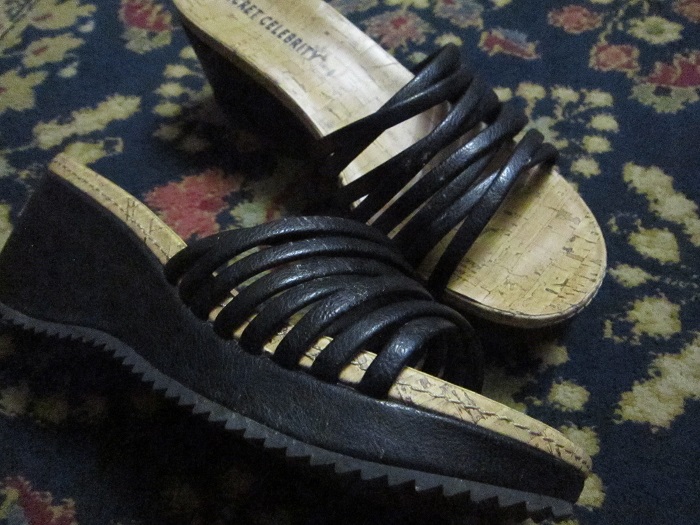 Distracted by the pig (yes, a pig) that was wondering around in the road, The Other Half never saw a thing. I limped back to the car, got in, and tried to explain that I was hurt. But the neighbor called to him to come over, so he drove over, all to look at a giant snapping turtle. (I live in a "fun" place.) Again I say I'm hurt; I think I broke it, but he tells me I'll be okay. So after the hillbillies men were done with their nature walk, to Michaels we went, with my foot looking like this: 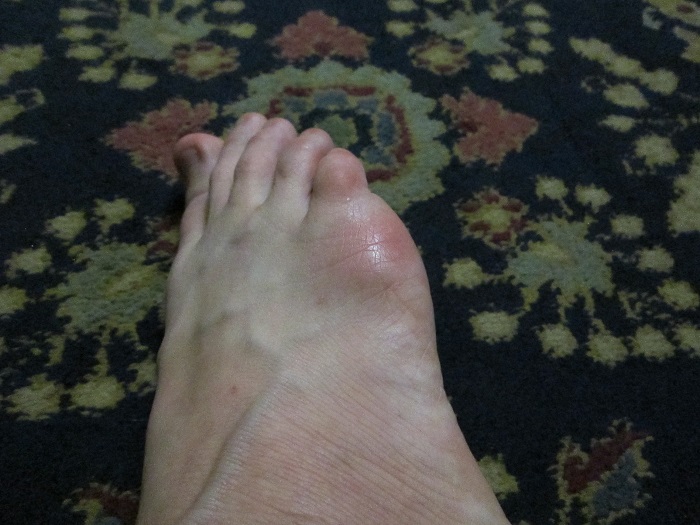 While at Michaels, I decided that if I was limping around the store I might as well go get those yarn needles I need to replace. I found this set of needles sold to be used with a loom... They look like regular yarn needles to me, just in a brighter color than the ones I usually get, and cheaper. Let's see if I lose these: 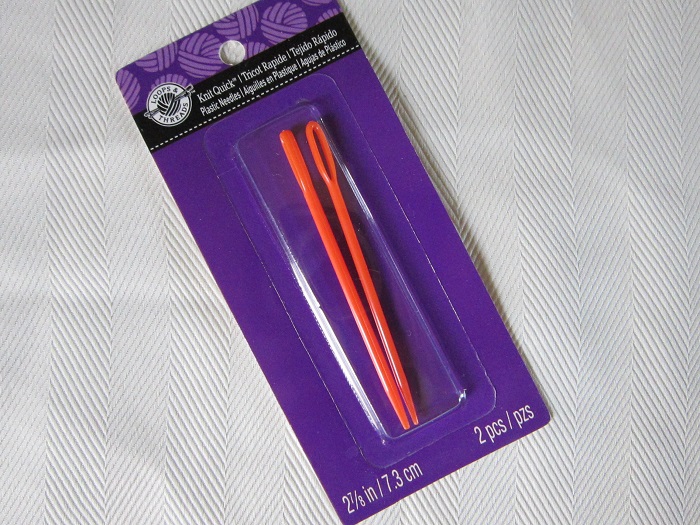 And since I was feeling poorly from 1) the sharp pain starting to shoot up my leg each time I took a step and 2) The Other Half's lack of caring about it, I made my way to the yarn aisle. I mean, it is only one aisle over, and I have to go back that way to check out... 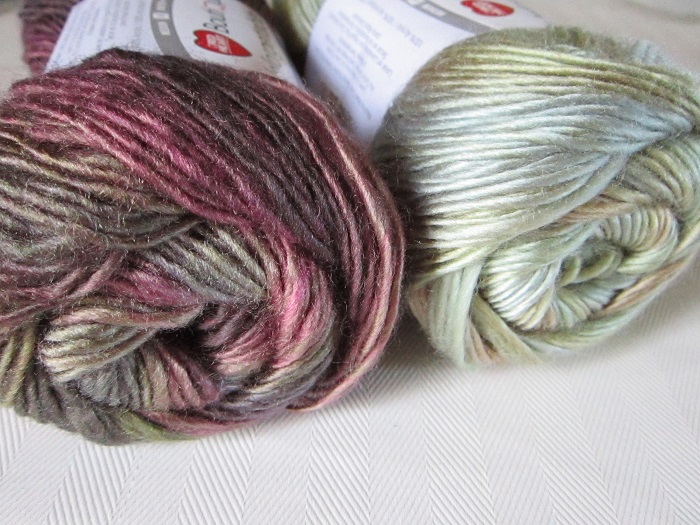 Yup, I know I broke it. I mean the promise, I don't know about my foot yet. (Hopefully that's just sprained.) Even though he became an enabler when he asked me to go to Michaels, I still could have resisted the craving to buy yarn. But when The Other Half refused to acknowledge that I was truly in pain, it hurt my feelings, too. I needed yarn therapy as much as I needed a doctor.  Maybe sometimes it's okay to break a promise, as long as you have a good reason and it's not hurting anyone. 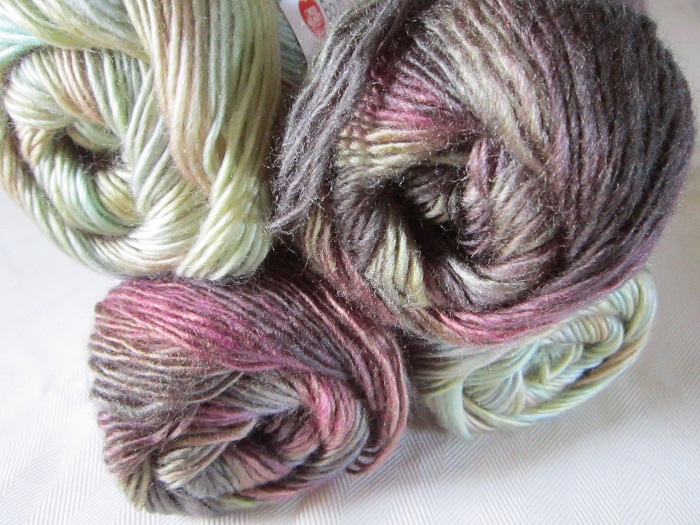 So, yeah, I broke it... And I shouldn't be ashamed, either! I got 20% of the whole purchase, including the box for his stereo-whatever. (Gotta love those coupons!) And I got up this morning, fed the cats, finished the second glove for the pattern, did a load of laundry, wrote out some plans for a few ideas, vacuumed the floors, did another load of laundry, and blocked my granny-love-knot shawl. Now that foot is hot and throbbing, and I feel sick to my stomach when I walk. I think I broke it, and I'm not proud of that one. After I finish that rug, I may be off my feet for a while. And since my yarn stash is buried in heavy bins, I'll need something I can get to easily. Yup... that purchase is completely justified.


Between organizing and finishing my granny-love-knot shawl, I've been making steady progress on the elephant rug I took an order for. The pattern is easy to follow, but full of time-consuming popcorn stitches, so it's taking a little longer than anticipated. And I'm dreading the bit of embroidery needed to finish the details of the face.


When I ordered the yarn for the project, it came to just under the $50 I needed to spend to qualify for free shipping... So I was naughty. I'm not supposed to be buying more yarn. I could have just bought another skein of the cheaper Super Saver to reach the threshold, but...


I know they have something I've been eyeing up for awhile... Something that that has been whispering to me: You want me... But... Don't... Buy more...But... It's sooooo prettyyyyyyyyy!!! 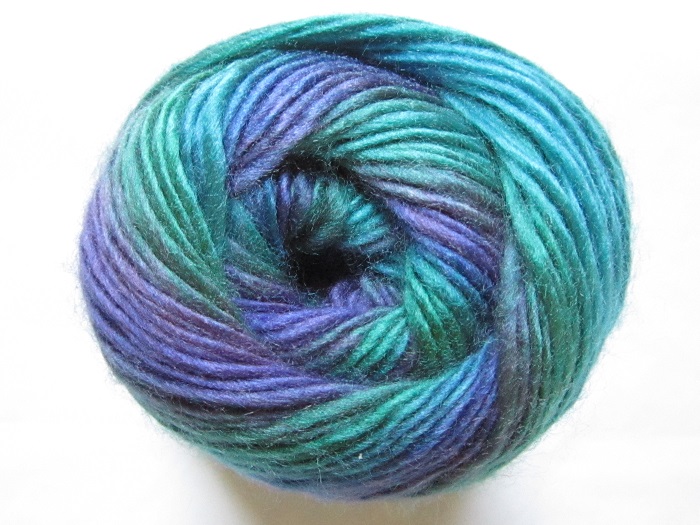 Yup. One skein, and only one skein of Red Heart Boutique Unforgettable was added to my order, completely justified by free shipping. I've wanted this yarn in this color (Dragonfly) ever since its release. And now that a skein is in my house, it won't stop teasing me. I know I decided to keep it packed away until I lift the ban on new projects, but I had to pull it out to take some pictures... 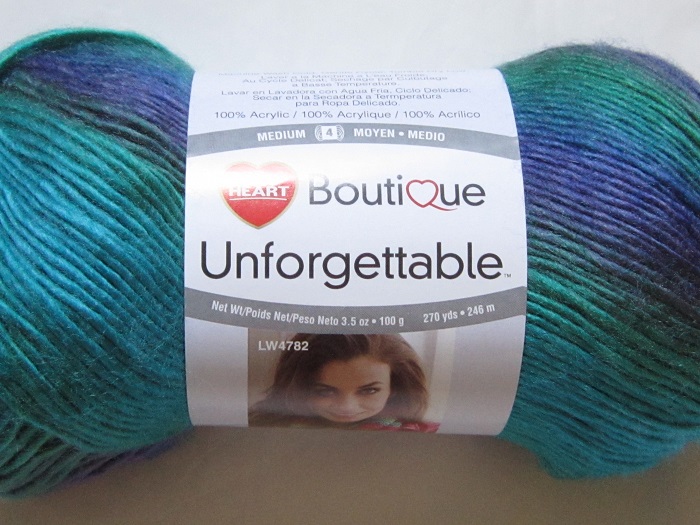 And during the photography, a little of the tail pulled out of the center of the skein. No. No, no, no, yarn, you can't do this to me... I'm committed to other projects... I'm staying faithful to my promises of no new WIP's... 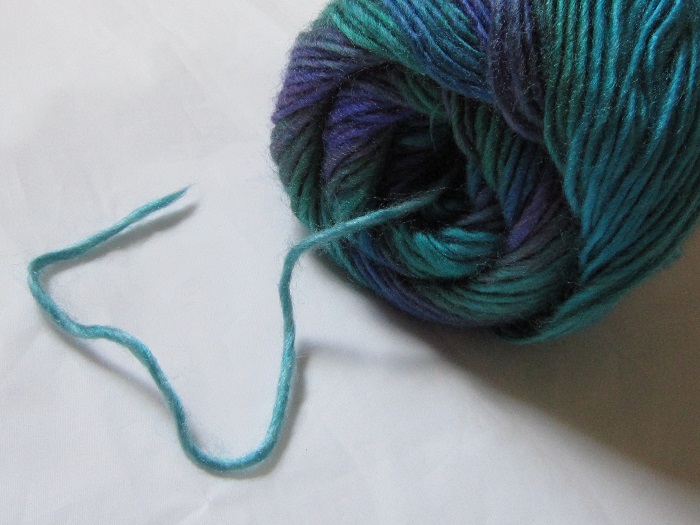 Please, stop calling to me! ...What's that you said, pretty yarn? You want me to pull that tail out a little more? Okay, well, just a little. You know we really shouldn't be doing this... 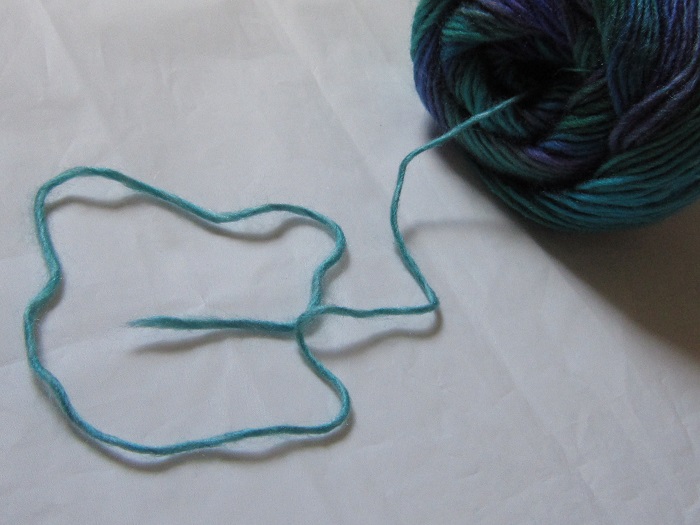 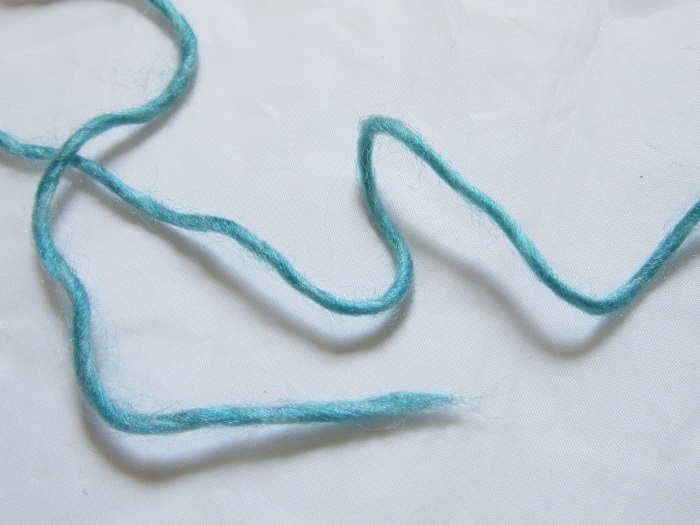 Sorry, either the heat is affecting my brain, or I'm having a love affair with my yarn. I'm pretty sure it's the heat. I haven't been thinking straight. I mean, how did that skein get on the table along with its recommended hook size? I couldn't have put it there, right? I promised I wouldn't start any new projects until I finished all my WIP's! 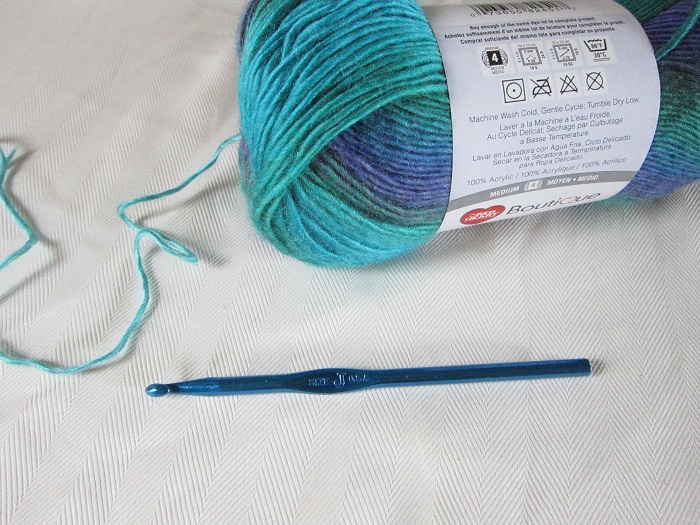 And how on earth did it get hooked up into the start of a lacy fingerless glove? Nooooo... Not me! I'm sticking to my word, remember? 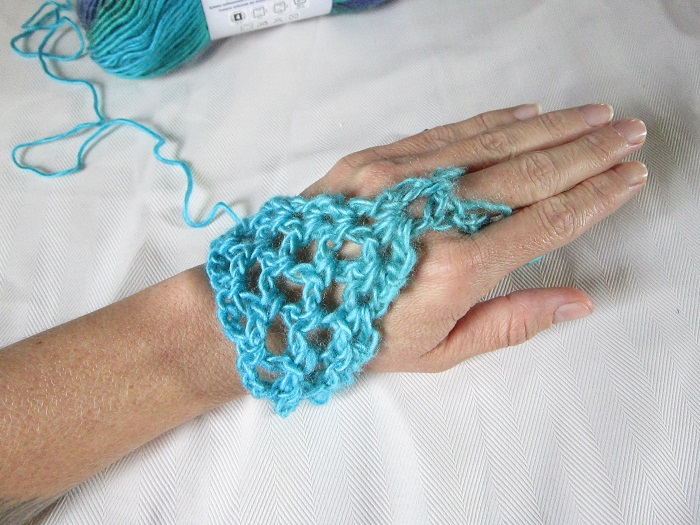 Oops, I guess I slipped up.
Happy Crocheting!