To make a long story short: Yesterday + ants = Exterminator coming today. It's been raining every day, we're flooded up to and under the house, and the poor bugs just want to find high ground... But sorry, they're not welcome here.

Well, that leads to a bigger problem: Mission to get organized + not enough space = Big mess. I had traded out what used to be my yarn cabinet for a bunch of plastic bins, and moved the cabinet into The Kid's room for her books and movies. Needing help but not wanting to turn her into slave labor, I made the mistake of asking if she could empty the cabinet... Just put it all on the couch... I'll get to it soon...

Yeah, right! She did her part, but my mess has sat on the couch for a few days now. However, now I'm hustling. I'm not letting it sit there while the bug people do their work. I had an embarrassing situation last time when the guy blamed the ants all on me. Nope, it's not rain causing the problem, he said... I need to clean more, he told me. To which I'm like:

Are you kidding me? I vacuum almost every day, mop twice a week, wipe down counters and tables every time I use them, and dust once a week (ceilings, too). Okay, so (clean) laundry tends to pile up unfolded, and there's usually a few dirty dishes in the sink. I still KNOW I clean more than most... Who disinfects every door knob and handle in the house once a day?


But I do know I am a clean freak with a clutter problem. Look what I found stuffed in one of the boxes from the cabinet: 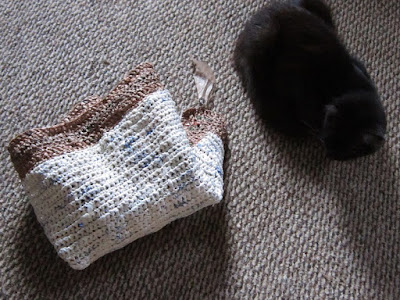 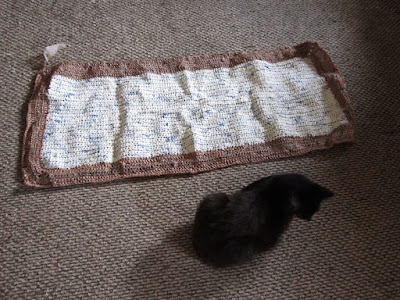 The plarn project, not the cat... He just won't move, and the snoring Other Half will be in the photos if I move over. So, today you get kitty pics. Now, back to the project: I don't remember what it was supposed to be. I have no memory of working on it. And I'm not going to continue working on it, because it's the perfect size to be used as a runner in front of my kitchen sink. All I have to do is weave in a few ends, and get it straightened out after being folded up for who knows how long. 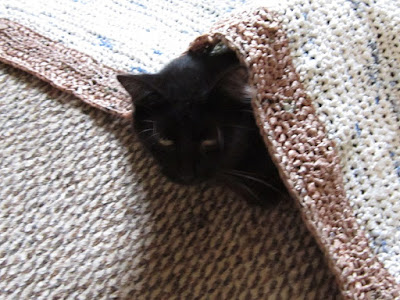 That one's just to prove Jump Steady won't move. No, he's not playing. He hasn't moved in about 5 hours. I put it on him. And he still won't move. 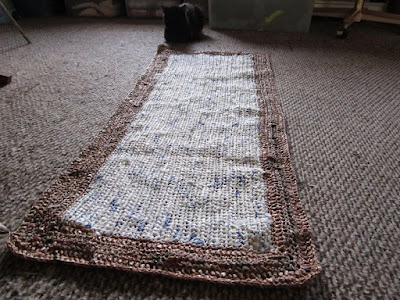 So after giving the project (and me) a stretch via downward-facing dog, it was in much better shape. Some of the really bad creases are still a problem, but I wonder if a little use will press them out. I tucked in the ends before moving it to the kitchen, deciding to scrap the project if the wrinkles don't straighten out. 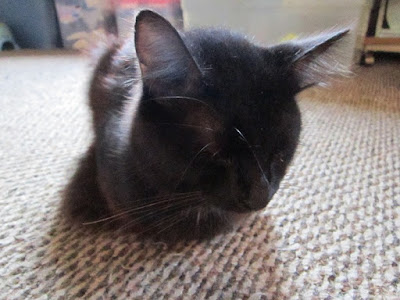 And he still hasn't moved... 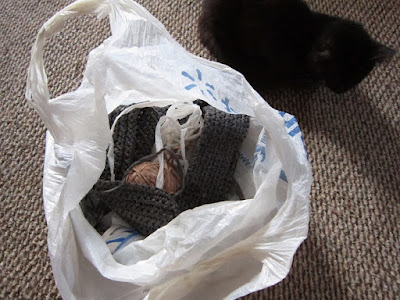 With a cat in the way and The Other Half still snoring (also in the way), I went through bags and boxes, finding more unfinished projects that I had no memory of. I stuffed one big shoe box full of scraps, test squares, and other random nonsense that could be thrown away. (GASP!) The cabinet wasn't airtight, and anything not protected by plastic is horribly contaminated with dust. In the end, I reduced my clutter by two large shoe boxes and one small... 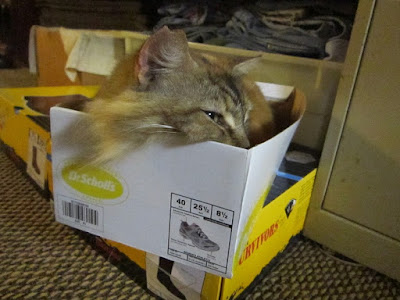 Okay, two large shoe boxes. The small one I emptied seems to be full again... 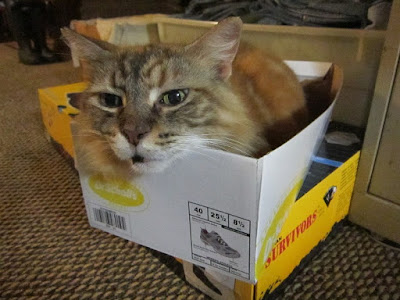 I told Lucky if she was going to take over the box, I would take cute kitty pics of her. 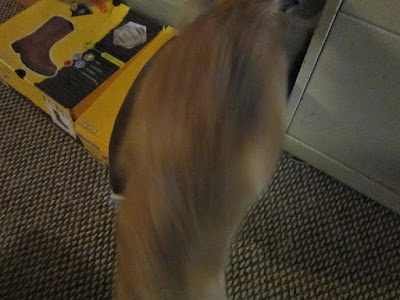 So, of course she moved. Good, now I can get back to work and haul all three of these boxes out for the... 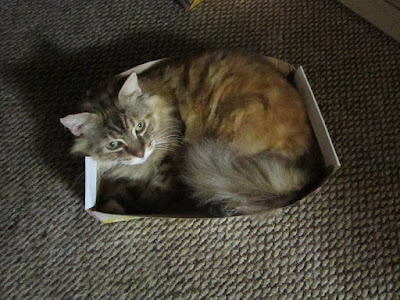 So, I reduced my clutter by two large shoe boxes, and gained another new plarn rug.