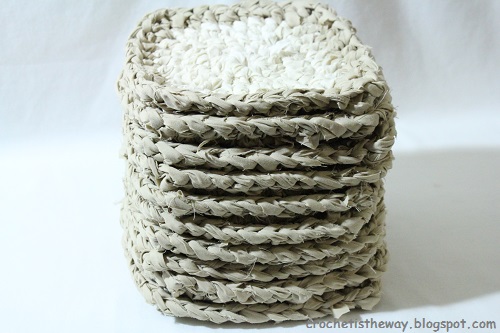 I've shared a few sneak peeks at this work-in-progress before, but it hasn't been out of the WIP pile in a long time. It advanced quickly at first, but then hit a minor roadblock... I misplaced the next sheet I was going to cut up for the project! After searching a few places I thought it would be and not finding it, I began to wonder if it didn't accidentally get discarded along with a bunch of scrap fabric I recently threw out. After much seeking and no finding, I made the decision to cut up a different sheet so I could continue with the project. 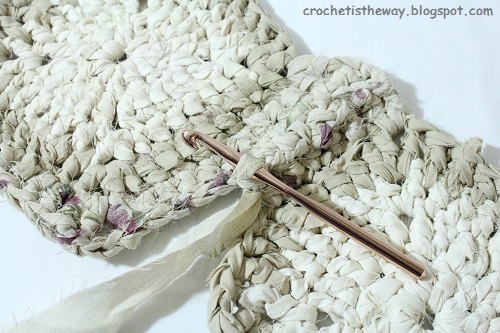 This sheet was similar to the neutral tan and cream that was already used, but it has spots of color from a flower design... The faded flowers used to be burgundy, but now they're a washed-out pinkish-purple. Once the fabric was cut into strips, the green of the leaves was barely visible. Above, you can see what the material looks like once worked up. Below, perhaps you can notice that the pops of color were more pronounced in the fabric strips before they were crocheted: 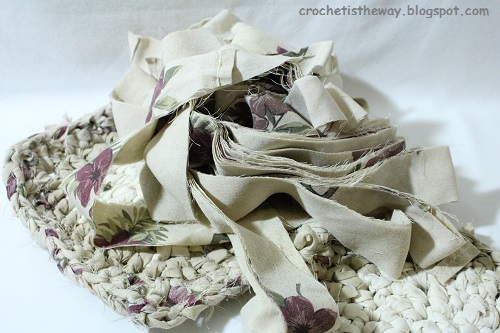 And the result is... I hate it! Maybe that neutral with its subtle colors can be used somewhere else in the pattern, but using it to join the squares was just... Too plain, for me. I wasn't happy about settling for second-best. (Actually, I was thinking that second-best wasn't good at all.) So the project was neglected in the WIP pile, and was almost downgraded to UFO (unfinished object).

Knowing that the sheet I use on my couch was becoming threadbare, I thought I had a solution: The bold burgundy could be used to join the squares, then I could use the flower-patterned sheet as a border to compliment the color. But as I searched for that burgundy sheet, I couldn't find it - Argh! Lo and behold... What did I find? Of course, it was the sheet I had been searching for all along: 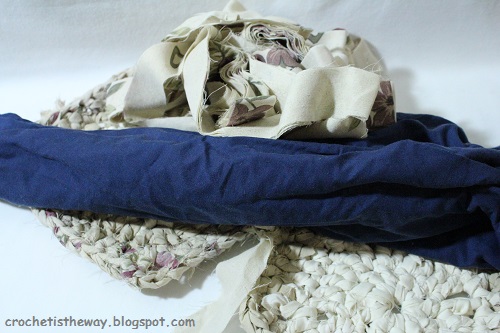 Now, I know I've been admitting that I've become disorganized, but I'm totally blaming this one on The Troll. It's another one of those cases where the thing I'm looking for isn't where it should be, then after giving up it shows up in a place I've already looked. That's a disappearing act, not disorganization!

But to put the blame-game aside, I had run into a new problem when I found the missing sheet: I didn't really like that color with the neutrals, either. So, I did one good and one bad thing... 1) I went through all of my sheets, sorting out the ones that are threadbare, have holes, or the ones that don't fit my bed after having to downsize. (Why do I still have those?) That was the good thing - It needed to be done. My sheets were sorted and my decision was made... And then 2) I asked Rip van Winkle for his opinion... And the project stopped all over again. 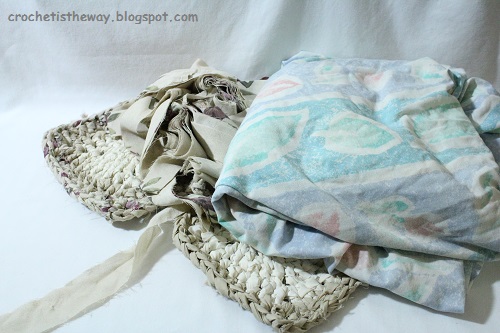 I really enjoy the idea of cutting up the sheet above, because I've never liked the pattern. I like the thought of how the colors might look once cut up, but never as a sheet set. Then Rip van Winkle says... "NO". He doesn't think it matches the neutrals, but I thought the specks of pink and purple might match with the material I had already cut from the flower-patterned sheet. Well, I'm the creator, so I don't always have to listen to his opinion. Do I? Nonetheless, I continued comparing colors from other sheets. 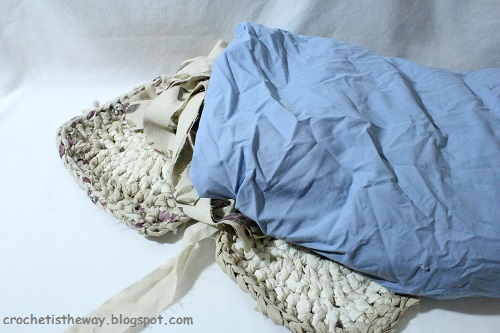 We both agreed that the medium-blue of the sheet above didn't look bad with the existing material, and there's a chance it will open up the color palette for that dark blue to fit in again. It's also less threadbare than the previous sheet, which might be so bad that it belongs in the trash... Or cut into rags, at least. 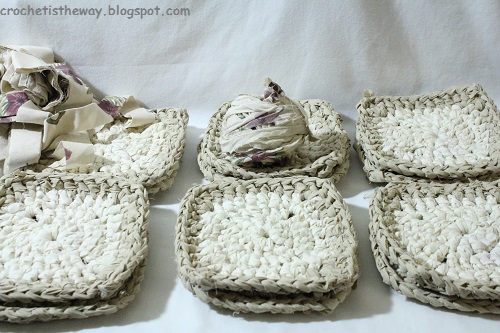 And the same goes for that already-cut material... The sheet was so worn out that I could see right through it when I held it up! So, the whole situation leaves me thinking that I should discard the older material and rethink the color scheme of the project. The medium-blue sheet's fabric is still good, but long ago the dog put a few holes in it when it was on the couch. The darker blue sheet is from a queen-size set that doesn't fit the bed, but its material is in almost-new condition... I had put the set aside after only a few uses because the seams on the flat sheet had come loose.

Which leads me to another thing to ponder... Where in the world is the flat sheet for that set? I've gone through all of them now, and still can't find it. That troll has been wreaking havoc around here since my stove has been broken... I guess he's upset that I haven't made cookies in awhile, but you can't bake much with a hotplate and a toaster oven. 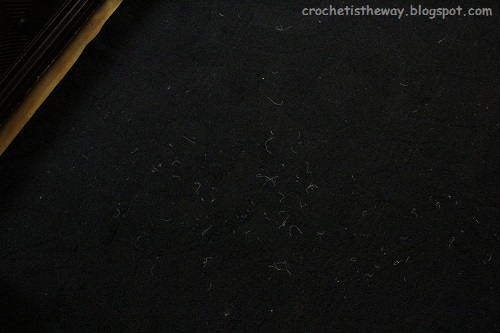 Hey - Perhaps I can get rid of this problem once and for all. Ripping back that threadbare sheet sure made a big mess! Since I now have to clean all the white threads from my black rug, maybe there a chance I can find that little *ahem* and suck him up in the vacuum cleaner...

Joking aside, I think it may be a good decision to discard the already-made material and start over with the better sheets. The other two that were already used weren't threadbare, and my joining material isn't exactly matching the gauge of the squares. I might complain about The Troll at times, but I think he did me a favor on this one.


So, by stealing the flat sheet of the dark blue set from me, is he telling me to make a smaller rug???
🤔