I'm still finding it difficult to get back to anything serious, but I realized that I let this series drop off with more posts to go. Since it's been a while, you may have forgotten or missed the previous posts about the dog-eaten notebook and the lost files on a hard drive... You can go back to the start by clicking here.


There's a lesson to be taught from my not-so-great beginner projects. And there's a mystery left to be solved! In the third "episode" of The Lost Crochet Files, I shared a photo of a project that appears to be slightly inappropriate. Well, here you go, have another of these horrible designs: 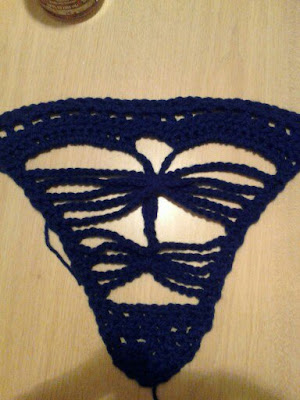 Once again, no, they aren't panties. But yes, that's what they look like. Now that I found a picture of another version, I know what the not-panties-but-looks-like-panties thing is from LCF 3. We could run down the list of descriptions such as "Bad design" and "What were you thinking"... I'll just tell you: They were supposed to be head scarves or bandannas - whatever you want to call it - The point was to make a head covering that would wrap around like a bandanna, but be cute and feminine. 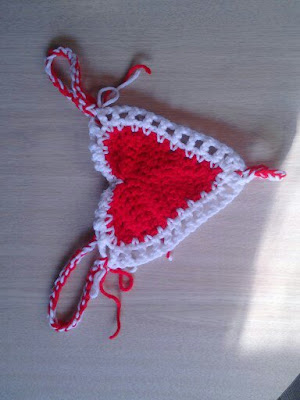 It all started when I made a "real" one for a friend, from a vintage pattern straight out of the 70's. She liked it, but I didn't like how the point of the triangle just flopped around on your head - And even that one was accused of being panties! I set to designing something "better". Now came the idea to include a short chain with a loop at the end, coming from the tip of the point, so that you could run the side-strings through the loop before tying. Yeah, 'cause that won't look more like panties...


The concept was perfect... No more flopping triangle. But the actual design... Who was I trying to fool? It looks like you're wearing a thong on your head with that extra strand. My beginner self failed to realize that the point should just be longer, so you can tuck it into the ties.


Of course, this had to induce that over-thinking habit of mine. Let's be honest, those "head scarves" kinda sucked... But they worked. And I finished them. I realized that I've developed a bit of perfectionism with my advanced skills, and I'm forever ripping out half-finished projects. These "fails" prove that I was just having fun with yarn and experimenting, instead of worrying about creating that "perfect" project.


So, I decided to pull up another old photo - But one that has been shared a long time ago here on the blog. Another plarn project, but this one was more of an experiment than a "project". I wanted to use clear produce bags instead of bulkier grocery bags, but I wasn't sure how it would work out or hold up. Some cutting and crocheting later, I had a "dream catcher". 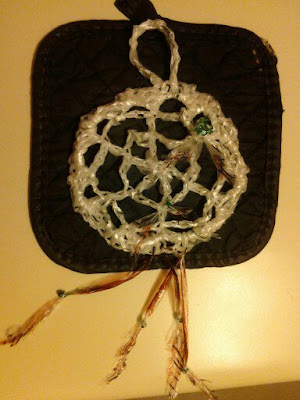 The reasons for the experiment: Find out how easily the material will break, what kind of resistance it creates on the hook, what the ideal width to cut it would be, and how long it would last in the sun. Yes, I'm curious about things like that last one, because they say it takes 20 years-or-so for a grocery bag to decompose. Is the plastic of a produce bag the same? I don't know, so I started an experiment. I even added another test in there when I decided to give it more character with some permanent marker.


I was just working out a semi-transparent mesh circle when I thought "this would make a cool sun-catcher". Simply because I collect dream catchers, the sun catcher idea was quickly altered into a dream catcher instead of a plain circle. Okay, so as dream catchers go, this looks like... Well, insert your own description there because mine has four letters and I don't use that language here. Even as horrible as it is, it still hangs in my window. Okay, so now it's more like a forgotten dust catcher and it isn't so pretty. It never really was pretty. (And neither is my window... Eww.) 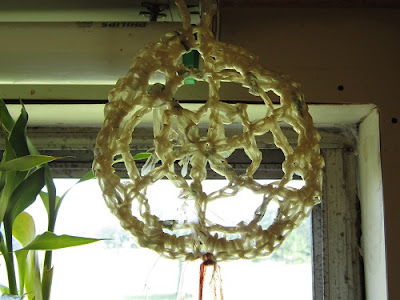 The point is that I was having fun and completing a project. It might be a bit embarrassing to look back and see some of the monstrosities I created as a beginner, but I enjoy the laugh, too. I'm not ashamed to say that I was learning. I just learned a lot of it the hard way.