I'll try to make a long story short, but you know that won't really happen: Many years ago I had a friend with a dog, and I was supposed to dog-sit for a week. He said she was a good dog, but as soon as he left, the dog went bonkers. Besides chewing up my boots, urinating on my bed (still sleeping on a $150 futon because of it), and relentlessly chasing my cats, the dog ate my homework. She shredded my notebook full of hand-written patterns, a year's worth of work, in the time it took me to take out the garbage.


Material things... The boots and the bed can be replaced, even though dog's owner won't pay for it. And the cats got over it when they learned the dog didn't like being scratched as much as she liked chasing them. But that book of patterns... That was irreplaceable. And to add to the string of bad luck from years ago, it wasn't long after that when the computer blew up... Almost literally! The power-supply smoked on it, and it was cheaper at the time to buy another PC. I just finally got it replaced before the new year, and I had completely forgotten that I had photos of past projects stored on the drive.


And thanks to that dog, I don't have patterns for these projects anymore. Some of them are pictures of my beginner projects, so you probably wouldn't want to follow the pattern anyway. In an effort to turn these lost crocheted items into something other than lost time, I'm pulling out those photos to share with you. Some of them aren't so pretty, but they're from the days of crochet past. Let's get a look and a laugh at some! Since I've been working with plarn lately, it was a neat throwback to find today's photos. 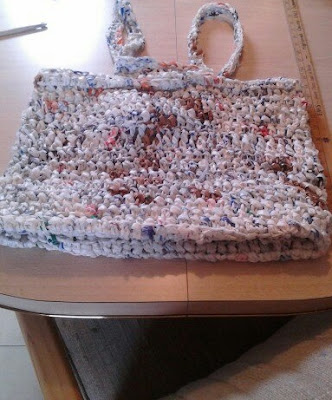 I'm proud of completing the pattern in my beginning stages, but it still had its downfalls. This monstrosity of a beach bag is tall enough as it is, but this beginner didn't think about the stretch of the stitch and material. After a year of use as a random tote bag, this now stretched-out project forever resides in my utility closet to hold rags. 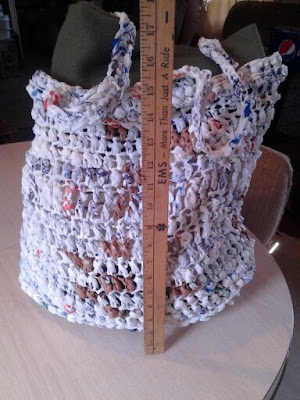 Next up are some low quality experiments: Some bangles and a pair of earrings, plus a ball of plarn that I had colored. These were just random projects I worked up while testing different ways to color the plastic, but the kids enjoyed the play jewelry. 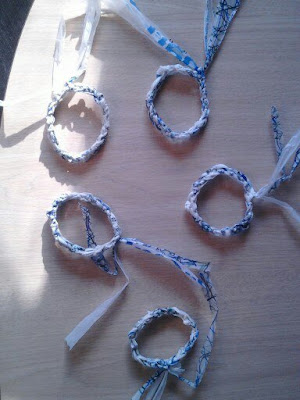 And here's a bit of an embarrassment, but one that's still in use. I made this when I first started crocheting. I learned the single crochet stitch and I was still practicing the double - Which was the reason I was working this mat up in a combination of singles and doubles, plus playing with a few chain spaces. Yup, that's a beginner's edge all right... Somebody obviously wasn't counting their stitches! 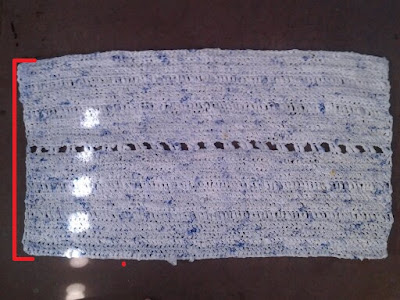 But hey, it's still being used as a slobber mat by the dog's water bowl. I don't think he notices that the count is off.
Thanks for taking this trip back in time with me! We'll uncover more lost projects in the next episode.
Happy Crocheting!
(Find Episode 2 here)