We Did It! A World Record


Did you make a blanket for the World's Biggest Stocking project? If you did, then CONGRATULATIONS ON BEING PART OF A WORLD RECORD! I fell short of my personal goal for blankets, but managed to send in four of them. And that's okay with me, because that's twice as many as I had originally planned. My target number jumped mid-project when I was bashed on Facebook for my work. Even though I didn't make it to the twelve blankets I wanted to make in retaliation, the negativity only drove me to push beyond just two. 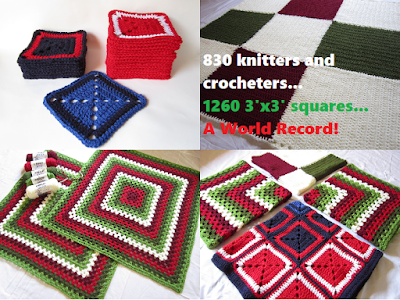 I wanted to design a special pattern for the project, so I could definitely pick out one of my blankets from the Stocking. I never did, because I know how that would go... I'd get halfway through it and rip the whole thing out in a fit of rage when I'm not happy with the design. I do that a lot. Getting involved in this project was never about "look at my pattern". It was about "Hey, YOU can help make blankets, too!" I knew I couldn't get them done if I was wasting time on designing a pattern.


I'm a little disappointed in a way... But not really. I wish I could find my squares in the finished project, just so I could say "Look! That's one of mine!" Like I said, the project wasn't about me. I'll just pretend that the one spot in the Stocking that happens to have four blankets a lot like the ones I made all next to each other... Yup, in my head, that's my spot, whether it really is or not. You can't have that spot. It's mine. Can you find your blanket in the stocking? I saw some really interesting originals in there! 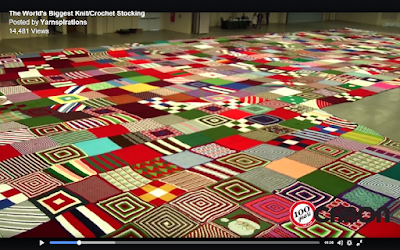 So, here's the stats: (I got this info and the pic above from the Yarnspirations videos on Facebook... I couldn't get the photo to link properly, so this link should take you there.) 830 knitters and crocheters stepped up to the challenge. A total of 1260 knit and crochet squares were donated to make the Stocking. The final project weighed in at a whopping 1641 pounds, and measured 76 feet wide by 136 feet long! $100,000 was raised for the Children of Fallen Patriots fund, and the Stocking was disassembled so the pieces could be donated to those in need.


Those who worked to assemble our squares into the Stocking spent a total of 40 days (960 hours!) sewing the project together. They deserve a big huge pat on the back! If you visit the Yarnspirations Facebook page, you can see a few different videos about the Stocking, but I think this one is my favorite. Watching the length of time it took to unroll the World's Biggest Stocking is a great reminder of how much work went into this project!


So many people came together to make the World's Biggest Stocking possible! From the companies that sponsored the idea to the 830 knitters and crocheters that made the squares, and especially those who assembled it... I mean, without them, it would just be a pile of squares. It all came together to set a Guinness World Record and benefit charity, too. Everybody deserves a big, huge


Now, enough with tooting our own horns over the World's Biggest Stocking. Because you know who deserves an even bigger thank you? The soldiers and their families that inspired this project. If not for their sacrifices and suffering, the Stocking wouldn't be needed... But even this project isn't enough to help them all. Remember that there's soldiers that won't be coming home this holiday season. Never forget the sacrifices they made for you. If you know a veteran or a family member of a fallen soldier, don't forget to say


I'll be busy over the next week or so, making sure some of my Scarf of the Month projects see their way to some veterans in need. Others are going to Bridge and Beyond in Ohio, and a few that aren't so practical to donate to the homeless are getting sent to some friends that are down on their luck. I'll try, but it's possible there won't be another post on the blog until the new year - But I'll be picking up with all the free patterns that have been on hold! So in the meantime: My progress on the blankets for the World's Biggest Stocking was pretty dramatic, and full of tutorials! If you missed the series, you can pick up some skills and read my rants by checking out these posts:


The Wednesday Wishlist
It all started here, with a short little post. At that time, a giant box of Caron United was already in transit to my house. Ha! I mentioned "looking into" using some of it for this project.


Yarn Tales Tuesday - National Crochet Month and #crochetforcharity
Yup, that would be the semi-famous rant I went on after the Facebook bashing. My inspiration to make more than two blankets.


Yarn Tales Tuesday - I Need a Break!
The invititation to come make blankets with me. I took a moment to unleash some stress and recharge before starting the project.


First Color
The start of the Big Granny Square Blanket. Beginners can learn how to begin the pattern, make a double crochet, and work the first two rounds of the pattern.


Color Two
I deal with "yarn vomit" (tangles) as we work the next two rounds.


Color Three
Rounds 6 and 7, plus more yarn vomit. I call out Caron United for having a yarn-tangling troll in their factory. For some reason, I never received a response. (lol)


Colors Four and Five
The last two color changes before the colors repeat, and a vomit-free skein!


Repeating Colors
Beginners can get a great tutorial to begin without a slipknot!


The Trouble with Trolls
Beginners can learn to tell the direction of their stitches; some advice about untangling yarn vomit; a mini-rant about trolls.


A Look at a Finished Blanket
More about the troll and how I messed up he made me mess up the project! Also, the last living appearance of Cornelius Peanutbutterus on the blog :(


The Big Granny Square Blankets Finished!
Beginners can learn how to invisibly weave in ends in the round and how to join yarn with the Russian join. 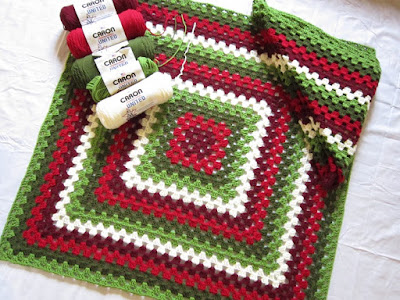 Yarn Tales Tuesday - Finding Myself in a Pile of Yarn
After veterans opened up to me about their struggles and said thank you for my work, I open up about my own struggles to say thanks back.


Beginning Blanket Two
Trying to decide what to do about having the wrong colors for the Nine Square Blanket; yarn vomit; how to begin with a knot-less slipknot.


Tips for Beginners and Beginning Squares
Beginning the squares, another lesson in the double crochet stitch, working into the knot-less slipknot, and weaving in your ends while you work.


Nine-Square Second Row
More weaving while you stitch and help with working into your turning chain.


Mistakes I Made as a Beginner
It's amazing that I have the skills of an expert, with all those mistakes I used to make! I get it all out there, with tips so beginners don't have to make the same mistakes.


Ready to Assemble!
Beginners can see what a square sometimes looks like before blocking - even when it's made by an expert. 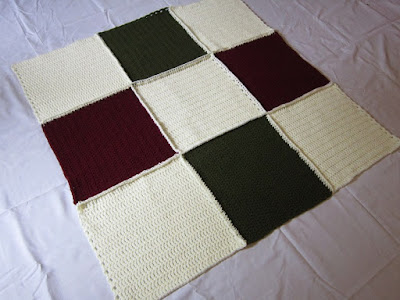 Beginning the Granny Square Blanket
Making the center of the squares and changing colors.


A Contrasting Color
Adding a second color to the squares, deviating from the pattern, and weaving in ends.


Uh Oh!
How I messed up again, and what I did to fudge it instead of frog it.


Time to Go
Due to some roadblocks, I skip ahead and share a sneak peak at all of the finished blankets.


Four Blankets Shipped!
The final result of the Granny Square Blanket after my mistakes, a tutorial for using the single-crochet-two-together for joining the squares, and shipping! 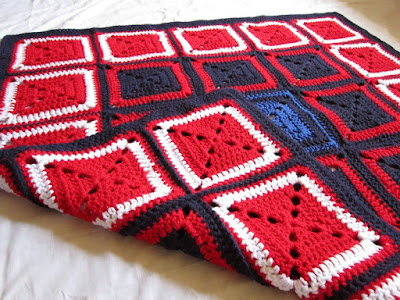 The idea that I wanted to join the project was announced February 18th, I began working on the squares in the beginning of March, and my four blankets were shipped to the project by the 19th of June. Twenty-three posts about my progress were published. I worked through constant thunderstorms; I worked through a flare-up of rheumatoid arthritis; I worked through power outages and terrible flooding; I struggled and still worked through the death of my closest companion. I connected with some wonderful bloggers and some amazing veterans. I listened to stories from them and their families: How much of a struggle they face every day. How much they need help. How much my work meant to them. And I still can't get it out of my head... Just some measly little blankets... Money raised for a college fund... Surely that isn't enough to say "thank you" in return for what they've given.

Happy Crocheting!
A Big Thank You to all the knitters and crocheters that made the Stocking possible!
An Even Bigger THANK YOU to all the veterans and families of fallen soldiers out there!
And Happy Holidays, everybody!