Who hates the way granny squares twist with each round? I do! And I'm willing to bet that you do, too. For this month's GrannySpiration Challenge, I'm going to share with you a granny-changing tip that straightens out the twist while remaining symmetrical in stitch count. In this post, you'll get a short tutorial for how to make the stitch I used on my WIP afghan. Check out the video for extra tips and ideas of different ways you could work this method, and you can see a sneak peek at some of the other squares I'm making. (And shh... I'll tell you a secret about this WIP in the video, but you have to keep it a SECRET!) 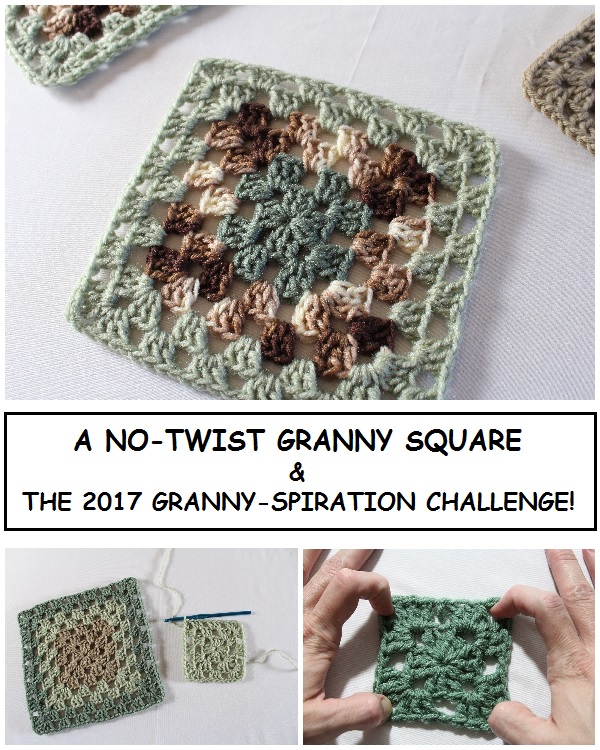 Be sure to check out the Granny-Spiration Challenge linkup after the tutorial. See what the other lovely ladies in the challenge have been working on, share your projects, and don't forget to enter the giveaway!


A quick explanation:
In short, we'll be using a taller stitch to move the corner of the square over. This allows the material to shift over, avoiding the twist of the granny. 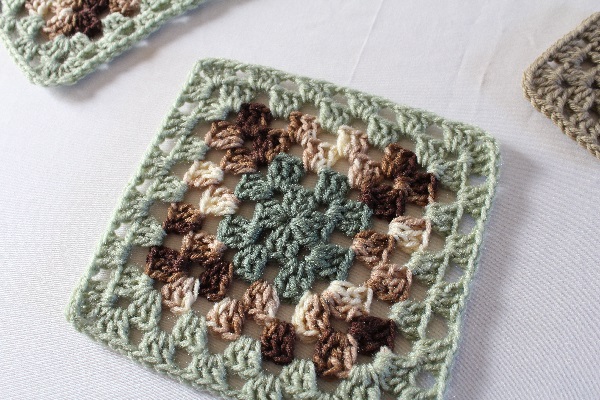 Material and gauge:
You can use this method with any yarn weight, any size square, and any hook you like. I'm working with scraps of Red Heart Super Saver and a skein of Caron One Pound, using a size J/10 - 6.00mm hook. 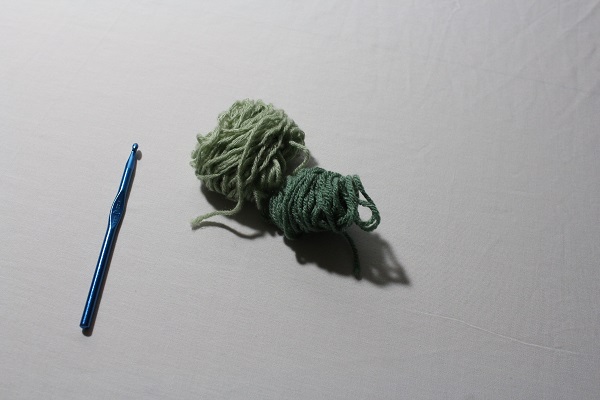 Notes:
To begin rounds, I only chain 1 before making the first double crochet.

I really recommend you watch the video! I explain more about working large squares and you can see a mistake/the fix I tried to make on a bigger square that has some problems. It may help if you happen to miss a stitch and find your granny twisting again. (The big square will give this secret project away for sure; sorry I can't show you here!) 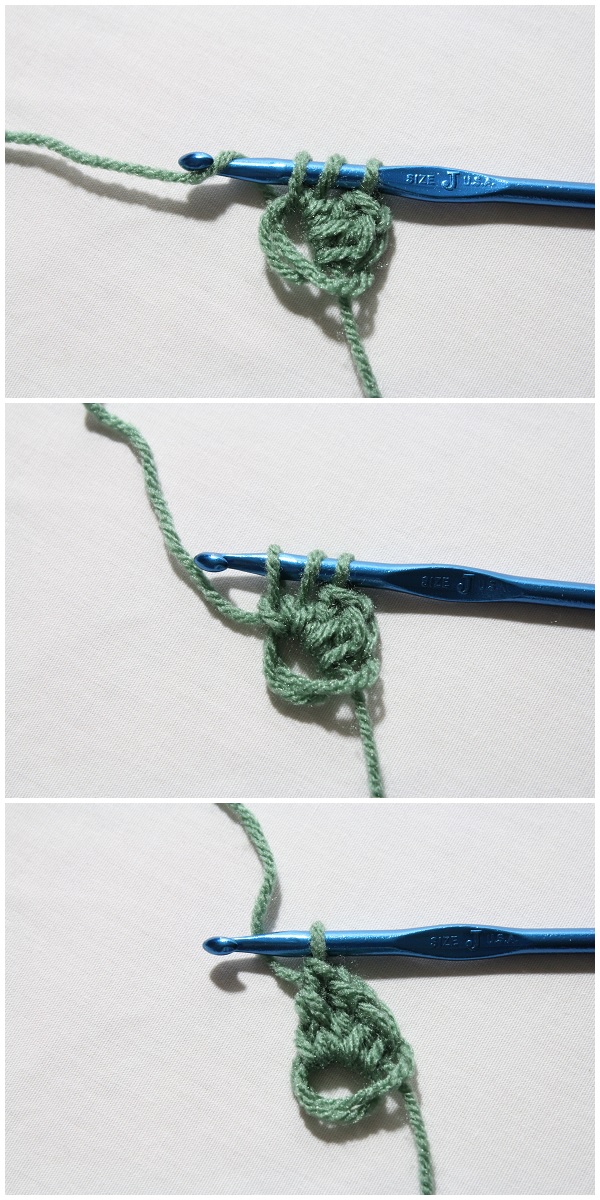 *Optional* You can still use this method with any way you like to work granny squares. However, I really recommend giving this join a try - It also helps to combat the granny twist, but it's not enough on its own.
Do not chain 1 before joining. Instead, join with a half-double crochet stitch in the beginning double crochet. 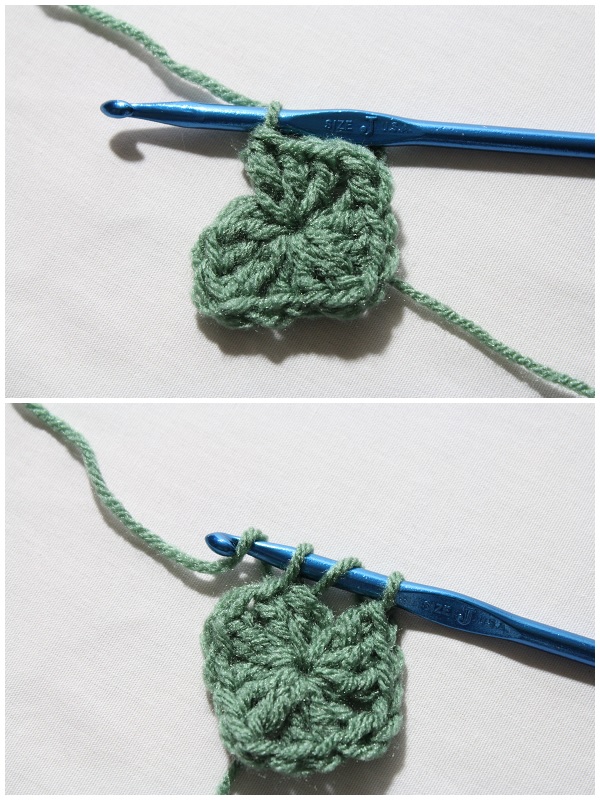 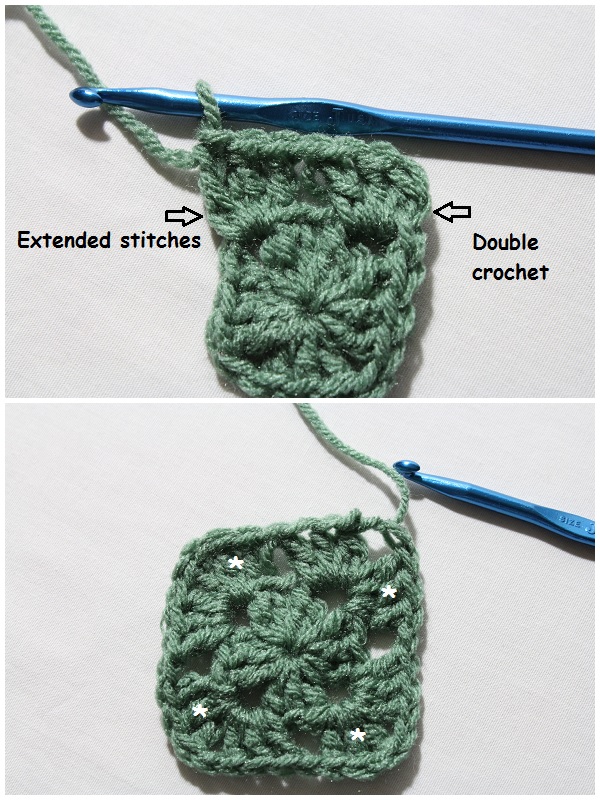 At first, it may look like your square is starting to twist in the opposite direction. Oh no! But don't worry; a little stretch into shape will work it out. 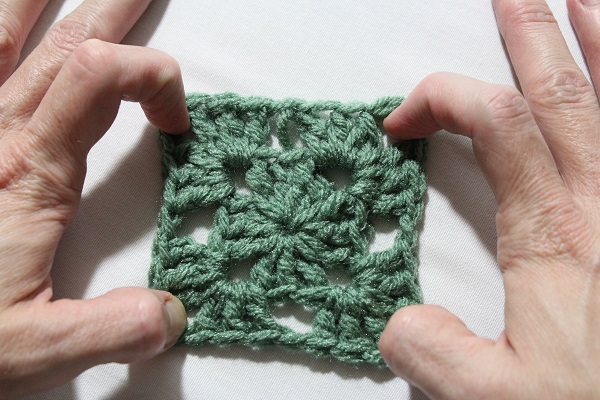 Just replace the last set of every side with a taller stitch, and say goodbye to the notorious twisting granny. 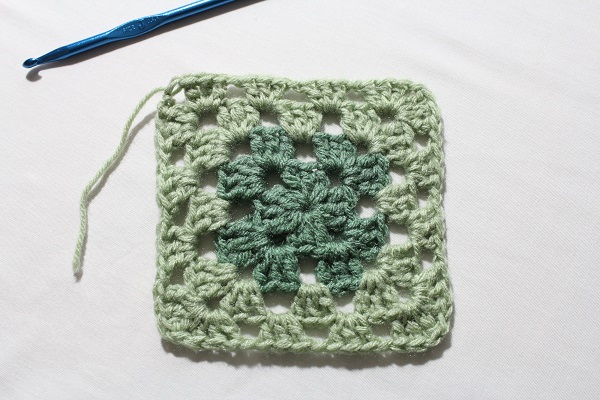 You can get extra tips in the video. Now, shall we get to that linkup and giveaway? You know you wanna win stuff!

Stop by to see Alexandra's post for this month's challenge at http://eyeloveknots.blogspot.com/2017/03/lifes-beach-hat-crochet-pattern-review.html.

And remember to visit everyone else participating in the challenge, too:

Granny Square Shrug from Life Away From The Office Chair

Crochet Halter from Life Away From The Office Chair

March's giveaway is sponsored by Marken of The Hat & I. One winner will receive five crochet patterns of their choice from The Hat & I shop (http://www.ravelry.com/designers/marken-of-the-hat--i). Patterns will be gifted through Ravelry.

There is something I failed to think about before creating Rip van Winkle's soap saver... It hasn't destroyed the project, and he actually likes it better now. But it is something that would upset me if the project was larger or more special. 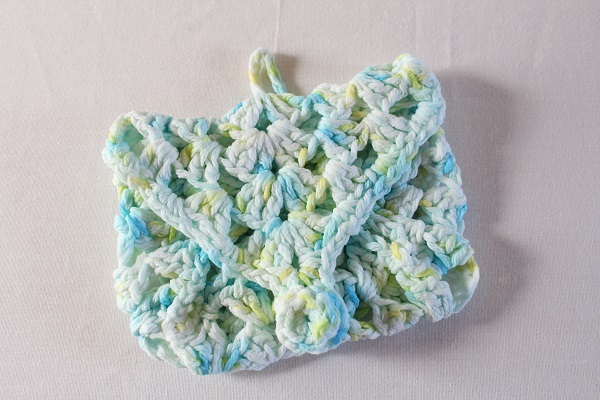 Do you notice a difference from the finished project I originally shared? I did wonder how long this piece would stay white, but that was only because Rip will be scrubbing concrete off himself with it... I wasn't planning on it changing before he ever got to use it. I've used other colors of this yarn before, so I was expecting some difference. Not like this. 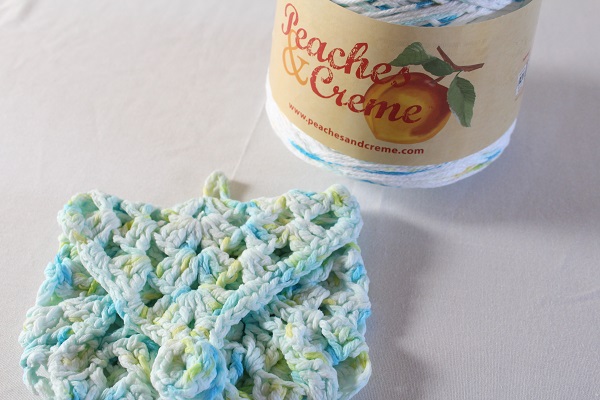 I do like using Peaches & Creme yarn because it's a nice smooth cotton, a good value, and it doesn't split much. I've used their solid colors that fade slightly after washing, and I've used a darker variegated that did the same without running together. I didn't expect any different from this lighter shade. 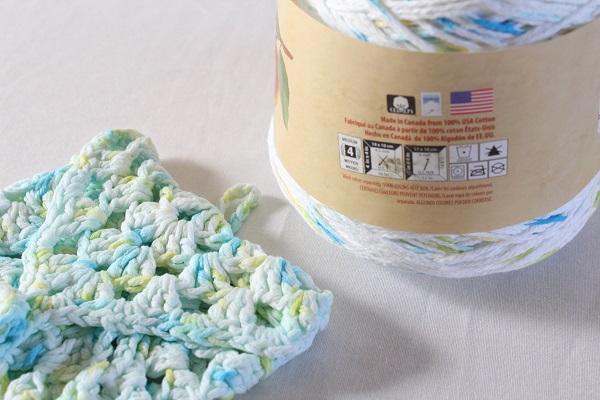 Now that I've seen what happens with each new color I use, I think it's safe to say they will all do it. So if you pick up a cone or a ball expecting the color to remain exactly the same, think again. I think the label should look more like this: 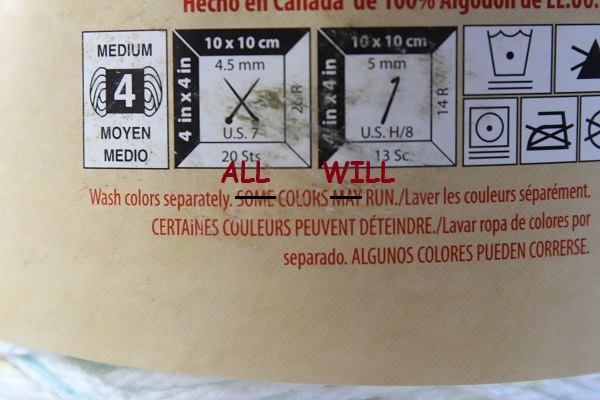 This is where I have to ask a question that may seem obvious to most: How are you supposed to wash colors separately? Like, I get how laundry goes; whites with whites; dark and brights separate; always make sure the red hat didn't end up in the load of white shirts; remove tree frogs from washer before beginning. But... How are you supposed to wash a multi-colored item without the colors bleeding together? 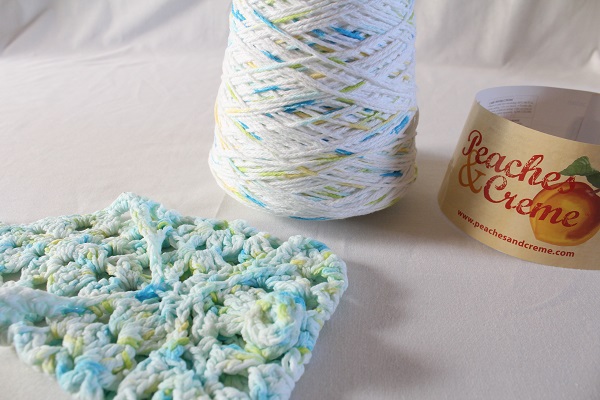 Well, I guess you can't. The good point is that we never expected this project to remain white for long, anyway. But if I was making an extra-special pattern and planned on the finished result remaining that nice crisp white with bright flecks of color, I would be majorly disappointed. And if the colors ran this much with just the first cold-water wash, how bad will it get when he uses it under hot water? Maybe it will turn white again, after all. 😊


This isn't a bad review, just a warning. I'm still perfectly happy with the results of all my patterns made with Peaches & Creme. But from now on, I'll always expect a difference in color for the finished project.

The next Granny-Spiration Challenge is coming up soon, so I thought I'd share a little sneak peek along with a granny-inspired quickie I just worked up. It's no coincidence that both projects are made with granny squares; I've been going back to it a lot since starting the Challenge. It is just by chance that both happen to be for a man. 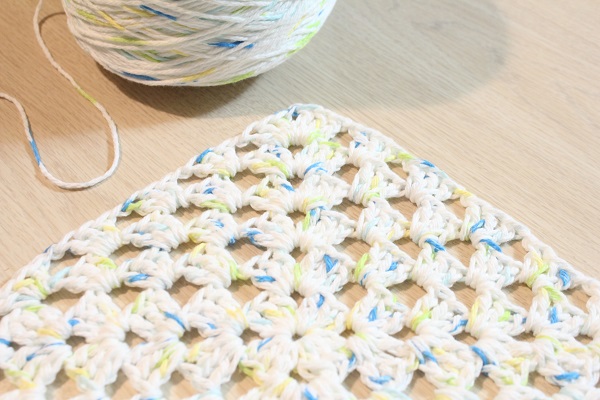 The first project was a request by Rip van Winkle. Yes, you read that right: He asked me to crochet him something. This is rare, but it's happened before. As usual, he gave me his input on how it should go, and I'm not happy with the result. But... He's happy with it, so that's all that really matters. I found out that the liquid "soap" (which is actually detergent) that he uses is no good for the infection he's still fighting, so I made him switch to a bar of real soap. This, of course, has caused him to start complaining about the bar soap being mushy because he leaves it on the corner of the tub... *Sigh* At least he asked me to crochet him a soap holder to stop the problem. 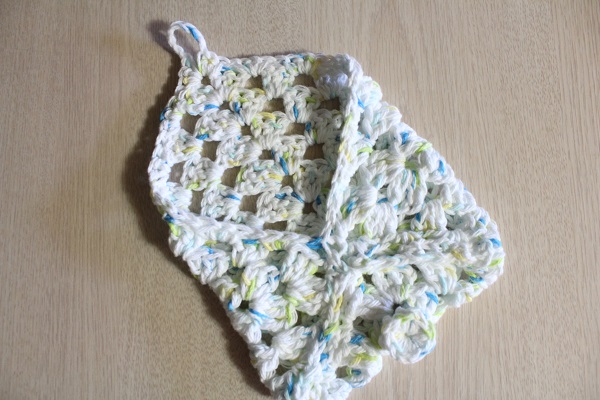 We were out losing our minds... Er, I mean shopping at Wal-Mart... We were out anyway, so I picked up one of the four colors of cotton yarn available at the local hell... I mean Wal-Mart on a Sunday. I didn't feel like having to go anywhere else, so I settled on a cone of the color he liked best. The color that has a lot of white in it. For the guy that works with concrete every day. I know it won't be white for long. 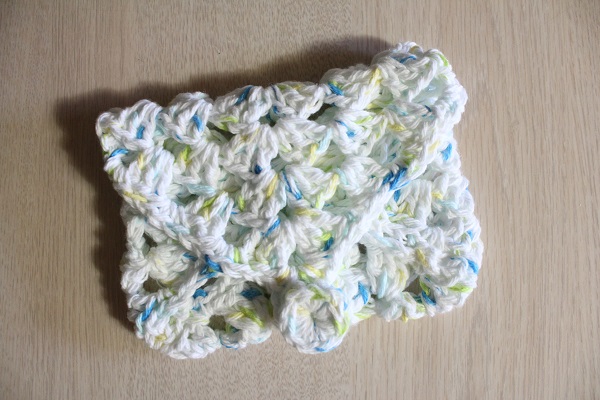 I was going to make it with a drawstring enclosure, but I was halfway through seaming it together when he asked me if I could put a button and a loop on it. *Sigh* I don't have any more buttons. I undid the seam and reworked it in in an envelope fashion, adding a loop as I worked around. (I seamed it without breaking off from the square.) Then I crocheted a button by making 10 single crochet in a magic circle, joined, and made 12 more single crochet right over those. It made a "button" thick enough that the loop won't slip off easily. 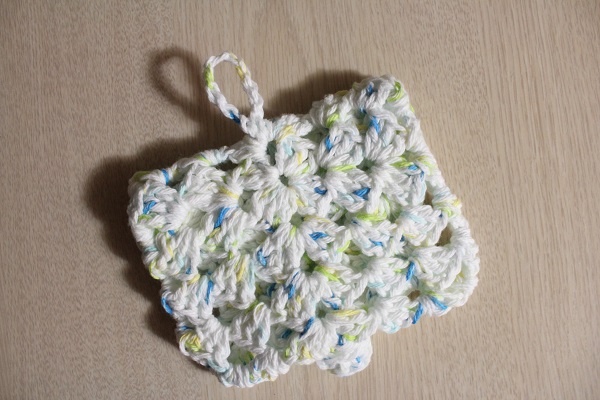 To finish, I added a 10-chain hanging loop so he can stop complaining about his mushy soap. I used an internet tip a while back and installed an expanding shower curtain rod against the back wall of the shower. A pack of fancy S-hooks later, we have a place for him to hang his washcloth, bath puff, loofah scrubber, and now his soap holder. The man has more bath implements than me and The Kid put together, and he still comes out with concrete on him. 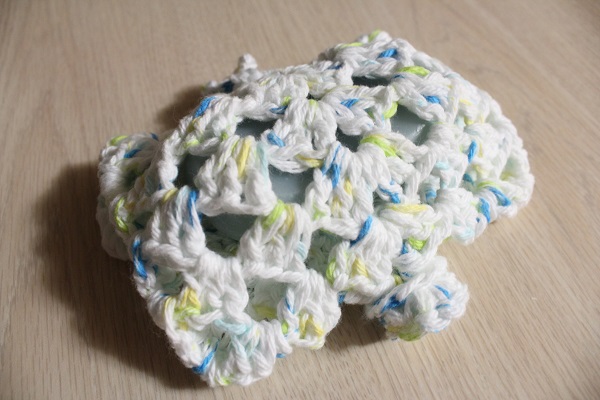 The thing I'm not happy with - but it doesn't matter - is that the pouch is way too big for a bar of soap. I would prefer a soap holder that fits the bar snugly, but he wanted something closer to the size of a washcloth. 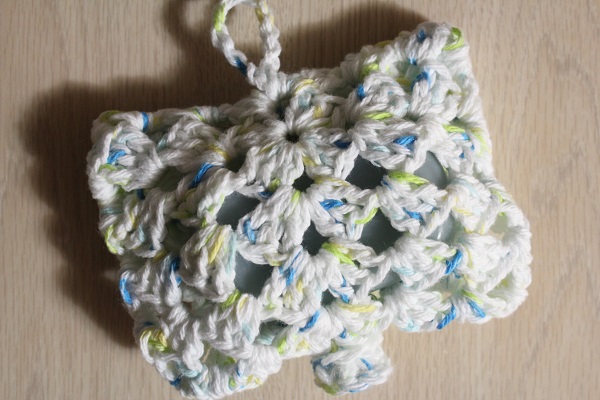 Again, it doesn't matter, but I don't like how the top folds over a bit because of the extra material. It's not my soap holder and he got exactly what he asked for, so I'm going to wash my hands of this one and just go work on the now-requested matching washcloth. Yup, it will be a simple granny square.


Now, my friends, for the sneak peek at something you'll really want to see! No, there's nothing really special about the stitches or the colors of the afghan I'm working on, other than I finally found a use for that horrid green-y Taupe. It will be made of simple granny squares in man-friendly colors. So what will be so exciting about this project that you won't want to miss? 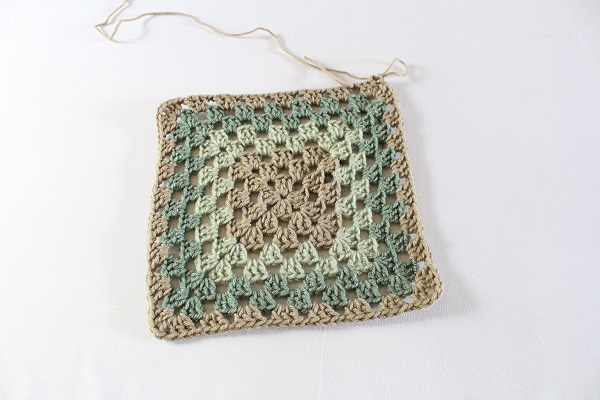 I think we can all admit that we don't like the inevitable twist that happens as you work a granny in the round. The more rounds you work, the more the center twists as you can see above. But that twist you see in that picture? Yeah, that's not gonna happen anymore!... I've been experimenting. You'll like the results.