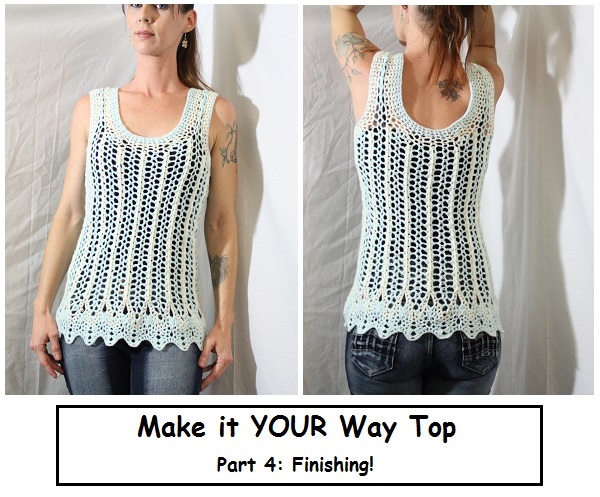 Although I loved the look of the pointy-bottomed panels on my top, I decided they were a bit too exaggerated for my style. And since I still had a ton of yarn left over, I figured it couldn't hurt to play around with the bottom edge. I'm so glad I did it! This part of the tutorial is totally optional (especially if yours is a one-color project), but I think the extra stitching around the panels helps them to hold their shape without the need for blocking.


I'm also extra-pleased with the color design that resulted. What I'm not happy about is the way these tutorial photos came out... I'm so sorry that I trusted auto-function settings for this project. For this part of the tutorial there's help with a new stitch, but the photos for some rounds were a blurry mess... Removing my background helped towards the end, but I did it too late. It's a mistake I hope I won't make again.

Not surprising: I adjusted the settings and managed a batch of beautifully focused photos in which I turned out looking like a mutant zombie. Still hate being the dummy... 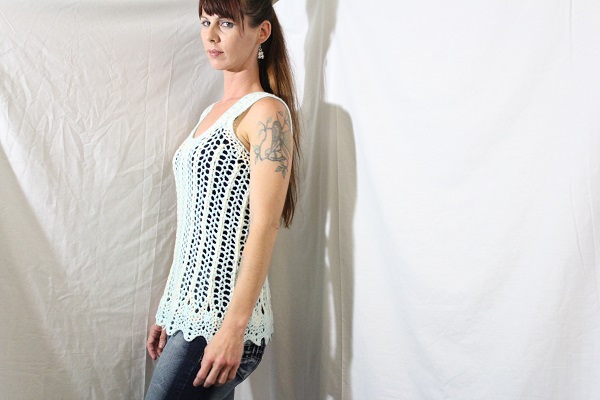 
Contrasting color (round 1):
To begin, I worked one round along the edge in the contrasting color. (I love how it combines together with the joining seam!) I shortened the stitches in each space to help pull the panels together, but this first round didn't do much for the shaping. Here's how I did it:

Again, I began with a standing double crochet stitch. This I made in the end space of the point. 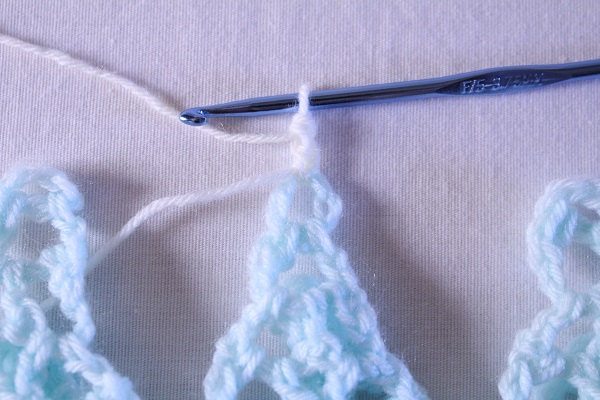 In the same space as the joining stitch of the first panel, I made one single crochet; and another in the joining space of the next panel. 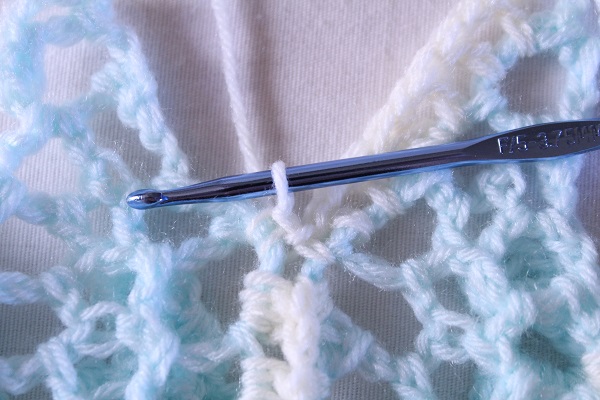 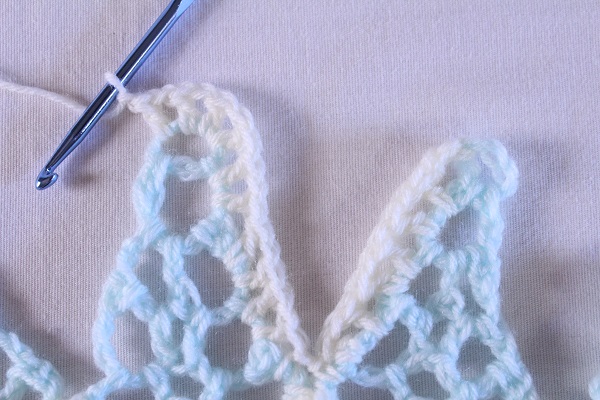 Here's where the photos were unusable:
I completed the round by making (double crochet, chain 1, double crochet), and chain 1. Because this was the only round I was working with this color, I joined with a slip stitch. (The following rounds are joined with a stitch to make a chain-space.) 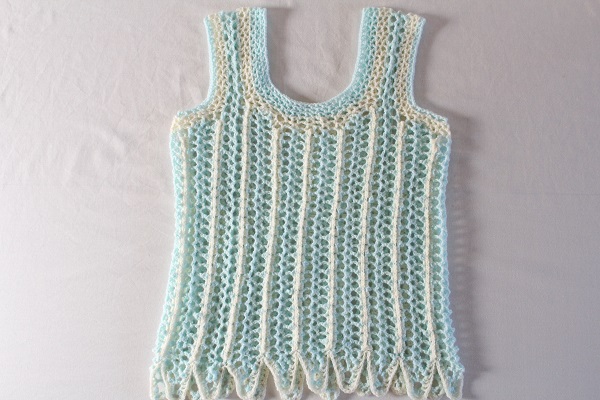 Main color (round 2):
(No pics for this round)
Again with the main color, I joined with a standing double crochet in the point of a panel.

I wanted to mimic the design of the large holes in the tips of the points, so I made (double crochet, chain 3, double crochet) in the tips for this round. If you don't want this in your design, you could make a similar set of stitches as in the previous round.

In order to finish the set of stitches in the beginning point, I used a double crochet stitch to join (makes chain-3 space).


*If you want to keep the exaggerated points of the panels, then it would be easier to stop working rounds (unless you're confident you can work out a stitch pattern). If you continue working into the same stitches, your work will begin to pucker. But if you still want to work more rounds for the color play, then try reducing the number of chains between stitches, or make just a stitch without a chain space near the "V" between panels (something like the two single crochet from round 1).


Round 3:
(Pics again!)
Here is where filling in the spaces really starts, and I used a not-so-easy-for-beginners stitch to do it: The double-crochet-4-together. But don't get scared! If you can make a double crochet (and you probably have been if you're following this pattern), then you can make this stitch. Let's get started with an example of the stitch placement first. 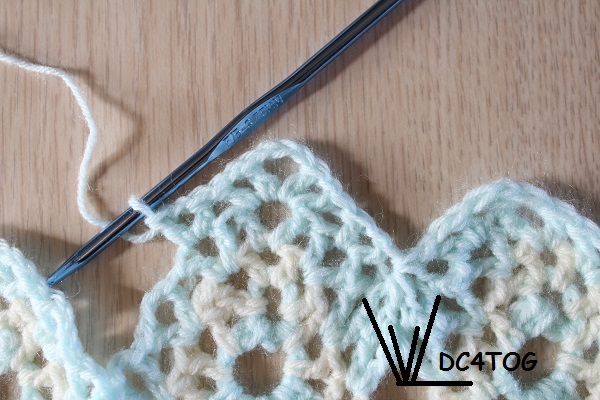 
Now, let's cover that dc4tog before we get to the point (lol). 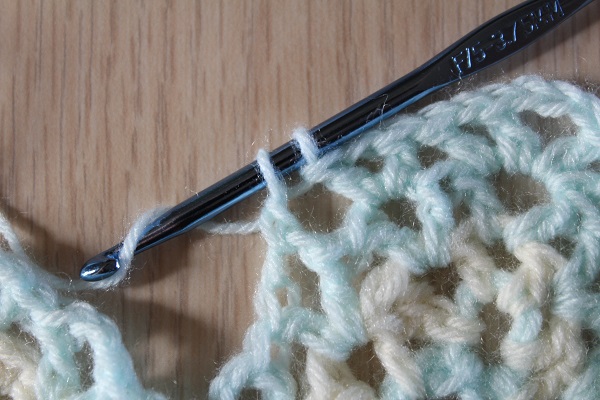 Getting the hang of it? You're making a half-closed double crochet in each space that you want to join together. 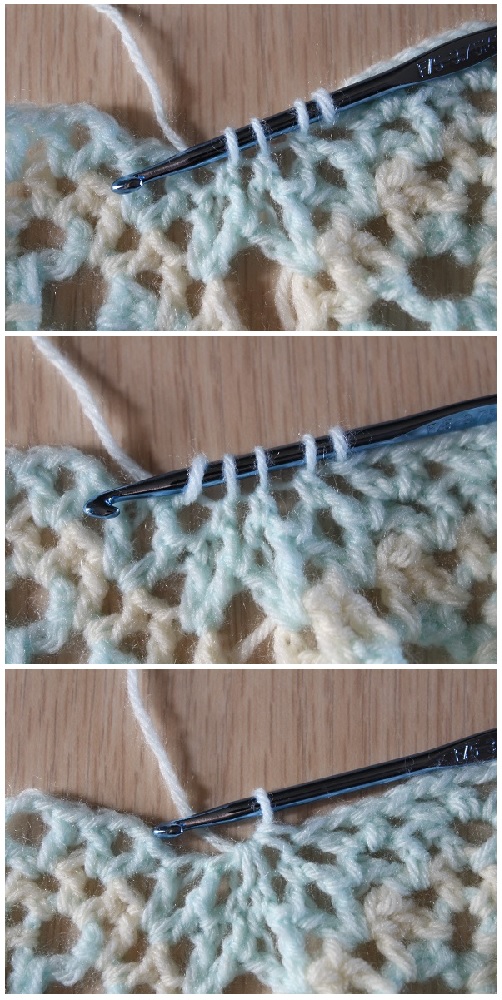 Yarn over, pull through all five loops on the hook. 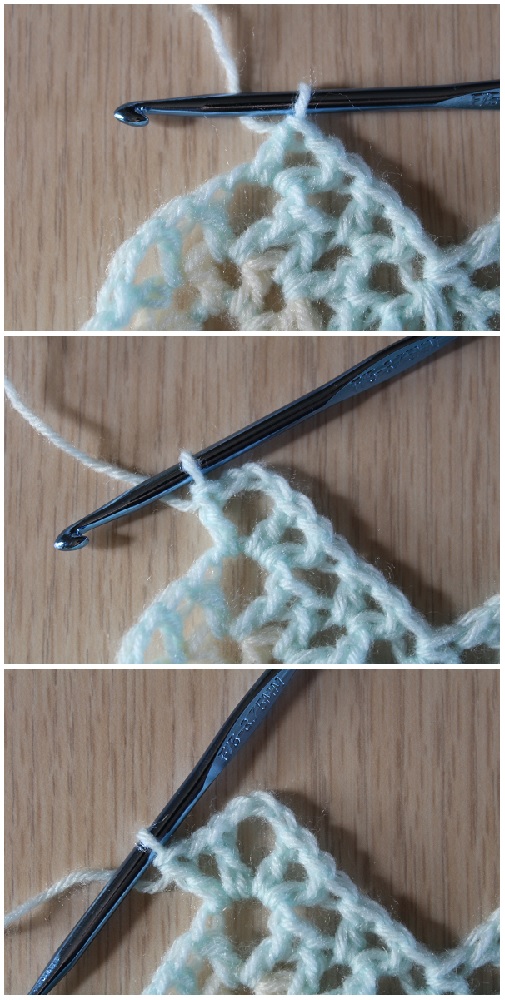 That's it! just repeat all the way around and join. 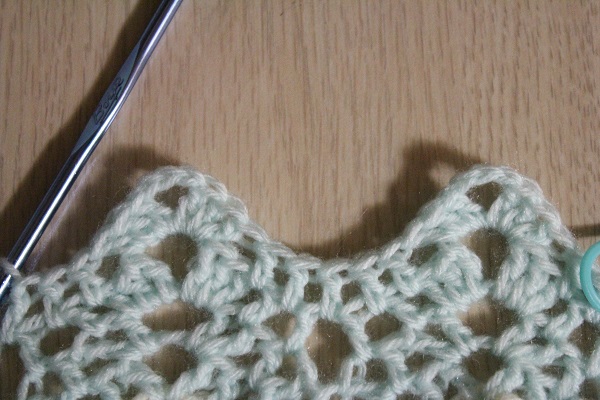 Repeat around and join.


Well, that's it... For this one, at least! I'm still disappointed in my photos for the tutorial, but I do plan on making another top like this for The Kid. Hers will have a different style (maybe sleeves?), so it will prove how easily this format of top-making can be adjusted to a different shape. I'll update here with a link when I get it done... Shall we see if I can do it within a year?


A word about caring for your top:
Before I washed and (slightly*) blocked my top, the dc4tog caused a minor pucker around the gaps between rounds 1 and 2. This was easily blocked out, but I wanted to create an easy-care pattern that didn't need blocking! I'm sure if you split the dc4tog into two-dc2tog stitches, it would completely eliminate the need for any blocking... But then you'll have to work the next rounds a bit differently.

*By blocking, I mean I shaped it out on a towel and smashed down on it for good luck. No pinning or weighing down needed. I allowed it to dry flat and the pucker was gone for good. (Or perhaps until the next wash!)

But prior to spreading it out, I thought I'd hang it up to "pre-dry" for awhile... That was bad. Really, really bad. LAY FLAT TO DRY. The stretchy lace weighed down with water stretched to what seemed like twice its length! And worse, allowing it to stretch that way caused the slight pucker to turn into an ugly ruffle. (Nobody wants ruffles around the waistline, right?) Thankfully, I was able to get my top back into shape when I did it right the second time.


How does it fit?
I think I'm a great tester for this subject, because I'm so very picky about my clothes. I don't like things that bulge out, hang loose, or ride up. Although my top has a few places that could be better, it fits well enough to pass my test.

No tricks and no staging to make it look good! (After all, you're getting the world's most awkwardest person as a model here...) In the following photos, I'll point out the things I love and hate about my top: 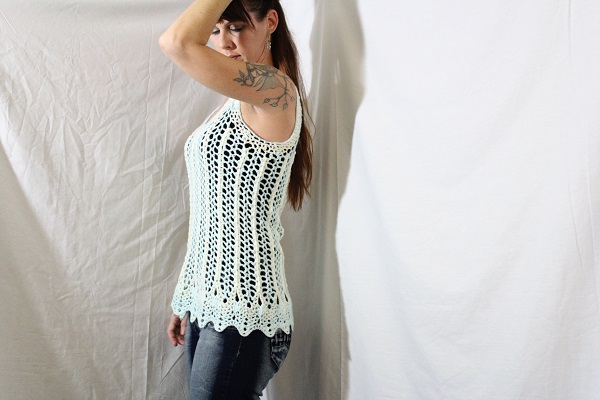 If I lift my arms higher than shoulder height, it creates a wrinkle in the middle-back of the top. I think I'm nit-picking about that one, but I noticed it in some photos. (And I still haven't figured out how to pose without looking like I'm smelling my armpit.) 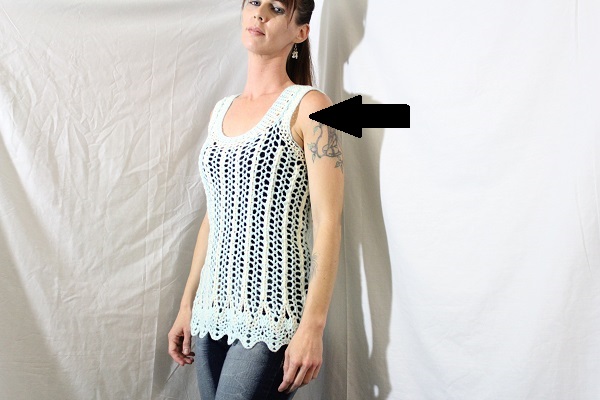 See the shadow on my shoulder? This gap doesn't hang out when I bend down, and the straps don't slip off my shoulders. It's actually caused by a combination of the decreasing around the armhole and the lace stretching over my chest. It's barely noticeable and it's not uncomfortable... But didn't I mention that I'm picky? It bothers me a little. But if I had decreased less, it would be too loose.

On side note, this could just be an issue with my body shape. I have a very pronounced dip there in my shoulders that I don't think "normal" people have. Same thing for that back-wrinkle, too... My shoulder blades stick out (like wings!) when I raise my arms the right way. Sometimes I think I might be part alien. Anyway... You can see in the next photo where my "wings" are pushing the straps of the shirt out: 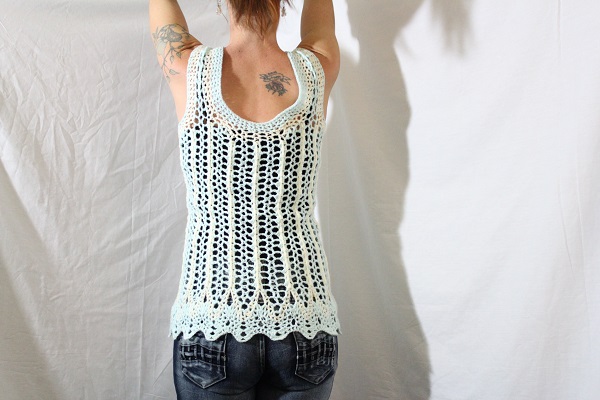 Notice that the back is also wrinkled again in this example. I used a similar picture at the beginning of this post, but I had been mindful of how I was raising my arms. There's no back-wrinkle in the photos that I don't have my wings extended (lol). 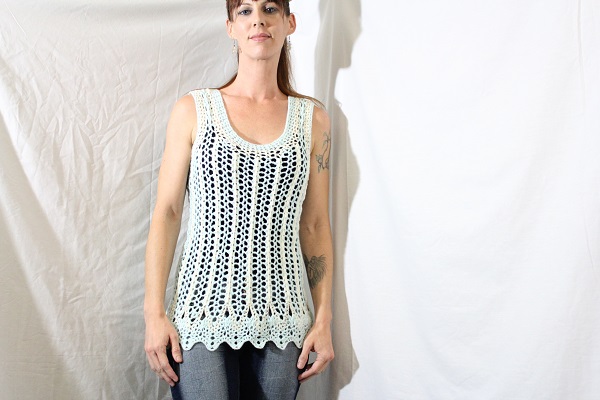 Overall, it fits great. There is one last thing that I totally love, but I thought maybe others may not like it as much: The decreasing around the armholes and neckline pulled the "strap" of the armhole panel together. It creates a tiny ridge that's no more textured than the seams I used to join the panels. Honestly, I think it looks pretty freakin' cool the way the panel stretches over the chest then decreases to a thin line over the shoulders. It's like a masterpiece of shaped lace, all while it's nothing but the same stitch worked a different direction.


With the tank-style sleeves and the just-past-the-waist length of my top, I think it will be easy to accessorize. I have a cute little denim crop jacket and an even cuter black vinyl crop jacket... I can't wait to see which will go better with it! Nope, you don't get to see that here, because the point of this tutorial was to inspire everyone to make their own version. And to me, part of making it your way is how you accessorize the final product, too. 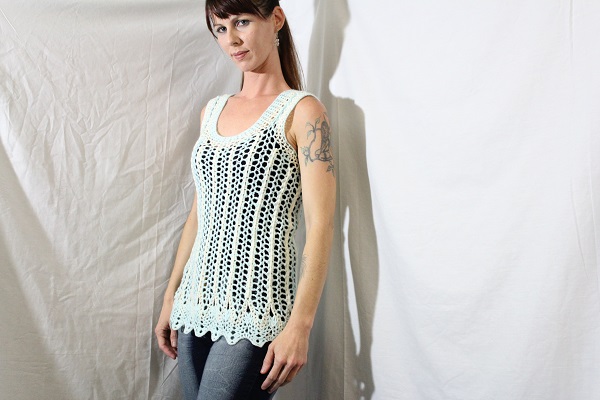