I'm stewing again after going over these photos... There's only two pictures to share today, but these were so cool! I was happy to find them for the inspiration, but the reminder of the lost patterns kinda hurts. The three projects you'll see came from when my skills were expanding, and I was experimenting with combining textures and materials. I was also going through a jewelry-making phase... Something I'd like to get back into.


So I can admit that after some wear/use, this first project doesn't look so great anymore. The combination of... Hmm, that's either hemp or jute... Well, the combination of that with cotton crochet thread may have been a bad idea. From years of going between the Kid's toy box and jewelry box after wearing, the cotton is fuzzy and it doesn't have that sleek look anymore.

Lessons to be learned, and patterns to be improved... But really, did it just get beat up in the Kid's care? I should recreate this choker to find out. And make it in the Kid's favorite colors, because I know she'll end up with it again. 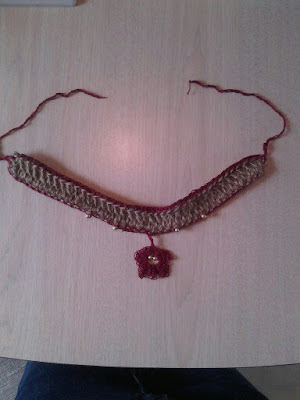 In anger, I must have pushed this project out of my memory. A silly thing to do, since I liked the set so much. I never even got a chance to get a decent display photo with the ends trimmed up! But again, I see room for improvement in my old patterns. 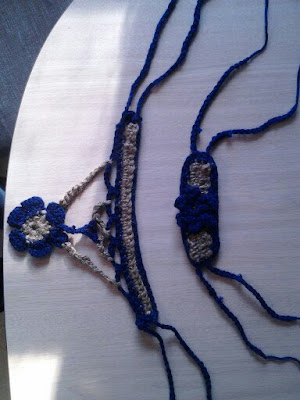 Hey, I had completely forgotten about making this choker and anklet. At least now I have a chance at recreating them from this picture! That's the thing I have to keep reminding myself when my attitude gets down because of my lost patterns. Summer will be here soon enough, and I think this set's beachy/boho style would be perfect for sandal and tank top season.


This time, it's mine. All mine! But I'll share the free crochet pattern with you. And okay, so I'll probably end up surrendering this one to the Kid too, after the first "Ooo, that's so cooool!", but then at least I'm confident that she knows better than to cut crochet.