The Impeccably Twisted Scarf is... Well, impeccably twisted! This might be a slightly complicated pattern to understand, but only uses basic stitches. Look for a tutorial soon! The center is created in one long strip, then woven back and forth to create a Celtic knot-inspired twist. The first round of the border is then added to hold it all together. Finally, the last round of the border adds some shape along with another twist created by a simple technique.


The end result is a scarf that is lacy on the outside and bulky on the inside. It's long enough to be wrapped multiple times for warmth, and pretty enough to be worn loosely as an accessory on warmer days. And did I mention that it's long? Finished size is 99" (251.5 cm) long by 5" (13 cm) wide. 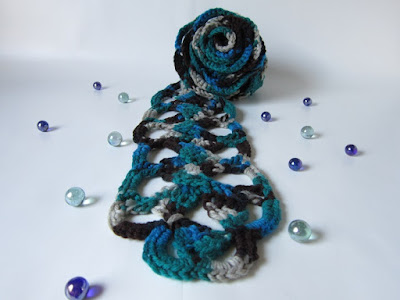 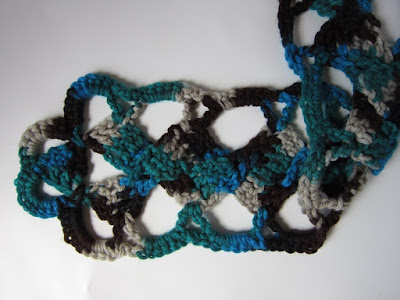 Notes:
Chain-3 at beginning of rows counts as a double crochet.

The pattern rotates to work into a post space in specific numbers of rows. Use stitch markers to mark turning chains and rows if needed.

For keeping the body of the scarf from twisting, use split ring stitch markers or safety pins to keep sections together. Otherwise, untwist and weave when you're finished... But trust me - use at least one pin for the beginning crossover. 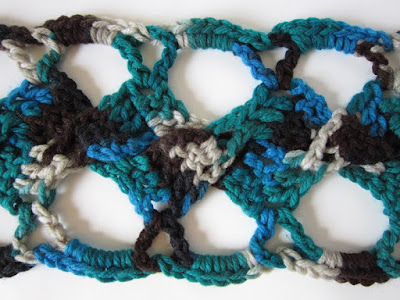 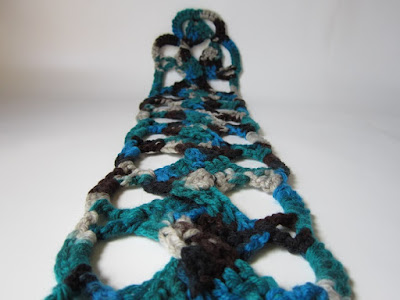 
Twisting the sections:
The strips should always face the same side up, not twisting. Beginning at Row 126: Cross Row 117 over Row 127. - There is nothing to hold the strips from untwisting at this point. You may want to pin the sections together as needed. The next set of 4 rows should cross under the opposite strip, so that the bottom 2 dc of the sets will meet. (Or, always cross the right side over the left side.) Continue crossing the sets so the beginning 2 dc of the sets meet. The last set of 3 rows (Rows 243 - 245) will join the beginning chain.

Bind off, weave in ends.


So as always, I tried to get a full shot of the scarf to show it's length. And not surprisingly, I still haven't grown. Here's my pathetic attempt at being tall: 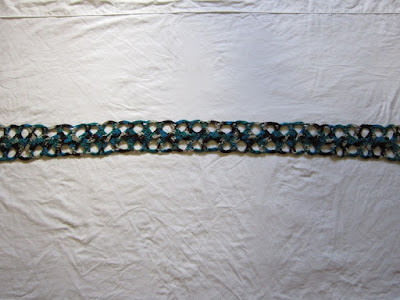 I figure if I don't show you, then it's just time wasted. At over eight feet long, this scarf can definitely be wrapped many times for more warmth. I think that makes it versatile enough to be worn from nippy fall mornings to frigid winter days, and travel with you for those chilly spring evenings.

It's G-rated, I promise. I'm talking about those works in progress (W.I.P.), why we start more before they're finished, and where we keep them when they're not being worked on! Sometimes we get stuck on a problem, and move on to a fresh project until we work it out. Other times, it might just be that "Ooo, I gotta make that" impulse that we crocheters can't resist. An in one instance for me, it's about recurring nightmares. Whatever the reason, most of us can admit that it's rare to find a crocheter with only one project on the hook. (But we know you exist somewhere!)

Now, maybe you're the kind of crocheter that has more than one WIP because there's one next to the couch, and one in the car, and maybe another at work... But I'm the kind of crocheter that just has them in a (okay, more than one) stash. "At work" is home, so having a WIP at the office means it's sitting in my living room. And I would love to have one in the car, but it would never get done - I only leave the house once or twice a week!


What I do have is an extraordinary collection of WIP's to keep my yarn stash company. Some of the WIP's even get tossed back into the yarn stash. I'm not really proud of it. If I really have fun with a project, I'll get it done no matter the difficulty. But I'll let the simplest patterns sit unfinished for various reasons, such as:


I have another project that is unfinished because I lost (misplaced, really) the pattern. It was a blanket I started as a beginner, and ended up being too difficult at the time. I have about 500 little pattern pamphlets that someone gave me, and I tossed the pattern for the project back in the collection after I gave up. I've never found the time to go back through them to find it. Someday I'll free-form around the finished panel to finally make it something other than a forgotten object.


To be honest, I think I have more Unfinished Objects (UFO's) than most crocheters... But at least I have more finished projects than WIP's! And I have a good reason (excuse) for each of them. I also intend to finish them all, someday. Except for one. It's a project I need some help with.


Is the pattern too hard? No! Did I run out of yarn? Absolutely not! In fact, it's (almost) finished... The only thing left to do is weave in the ends, and attach a motif I made to fill in a hole in the center. So why does this project remain unfinished and buried after two years? Go ahead and laugh if you want, because I often do, too: Nightmares!

I designed this super-awesome double-strand afghan somewhere around two years ago. It's made in four panels using three colors, then the panels are attached with a double-strand seam. I went through something like eight average skeins, and four or six jumbo one-pound skeins. With new joins, seams, and a border, there's over thirty tails to weave in. I think I've finished about half of them over the years. It keeps getting re-buried deep in a cabinet. Every time I pull it out to try again, the nightmares start again. They're often different in little ways, but the main plot is always the same:

As I weave in the ends of the afghan, I notice them beginning to move. It freaks me out, so I attempt to throw the project off of me, but it's too late. Every tail has become a tentacle, snaking around my arms and legs; holding me down. I try to scream for help, but the body of the afghan is smothering and choking me. The center hole between the panels becomes a drooling mouth full of razor-sharp teeth. Unable to move or cry out, my project devours me.

So, perhaps you can understand why this project causes me some anxiety. I know, I know, it's only a nightmare... But it's a nightmare that freaked me out enough to remove the project from under the bed and stuff it in a locked cabinet! Every time I try to work on it, my hands get sweaty, my mouth gets dry, and I find a lot of reasons to stop working on it. Besides therapy, hypnosis, or possibly even a prescription (that I wouldn't take), what am I to do? It would be nice to have my super-awesome blanket for winter, but I might be afraid to put it on my bed!

Besides the evil afghan that gets stashed deep in a cabinet, a few of my WIP's are stored in a yarn tote, in boxes, and in bags. (I have a lot of WIP's!) But most of them sit in my WIP chair. Yes, I have a chair for my WIP's... It used to be my chair, but my WIP's kinda took over it.


And do you know what I've learned about WIP's that sit there for too long? They get dirty! While I'm busy playing with chains for new projects, my WIP's are collecting dust. That's not just a figure of speech, either. They actually collect dust! Because of allergies, I'm constantly dusting, vacuuming, and and cleaning surfaces. But while working on a project using white thread, I ran out and had to grab a new ball from the stash. That's when I discovered that even with all that cleaning, my WIP's are still getting dirty! The new ball of white that was kept put away in the stash was still nice and white... And the thread of the project that's been sitting in a chair was quite dingy.


My dirty secret is out! My house isn't as clean as I think it is, and my WIP's are showing it. For my work as well as my allergies, I think it would be a good idea to get one of those ionic air purifiers to help clean the air. I live on a dirt road, so I think that has a lot to do with the extra dust. When the garbage truck goes flying by, it looks like a sandstorm outside. Even though I constantly clean, and clean or change the three filters in my vacuum, and clean/change the filter in the air conditioner, there's still dust! So, I'm officially going to take back my chair. If I'm not working on it, those WIP's are getting put into bags or the cabinet. There's not enough room to store them all with the yarn stash. Maybe the good ones can convince the evil afghan to stop giving me nightmares.