A Nightmare of an Afghan


I know I've mentioned my "Nightmare Afghan" here on the blog before, but for new readers, let me recap: This stems from my dislike of weaving in ends. Why I designed this project, I'll never know. It's a four-panel, three-strand blanket with double-strand seams. Number of ends to weave in: Oh, I forget by now... It was over thirty.
Too many!


After finishing the panels and joining them together, I thought of the project as "done". Then I opened my eyes and realized it wouldn't be "done" until those ends were woven in. I threaded the needle and spent night after night weaving. And then the nightmares began... 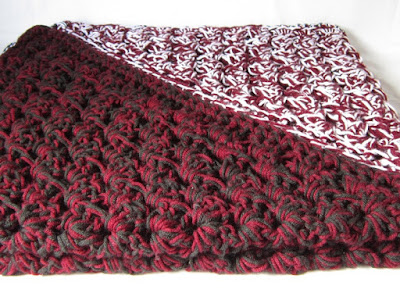 Every dream was similar in one way: My afghan's unwoven ends would become tentacles. The space in the center where a motif would eventually go became a slobbering, toothy mouth. The tentacles held me down; prevented me from screaming for help. The end would differ: It would either smother me or eat me alive. Sometimes, both. Either way, night after night, it wasn't good.


Unfinished, the project got stuffed in a cabinet. The dreams stopped. My W.I.P. (work in progress) became a U.F.O (unfinished object). While doing a little Spring Cleaning, I came across the abandoned afghan. I thought to myself "How silly! Why are some dreams stopping me from finishing this awesome blanket?"... 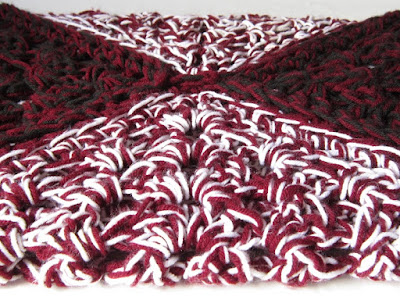 And work began again. One night later, so did the nightmares. I tried. I really tried. But the nightmares just got to me. It made me nervous to work on it. My hands would get sweaty. My mouth got dry. I would even start to shake a little and found reasons to walk away from it. The afghan made it back into the cabinet again.


I tried some more a few other times, but the result was always the same. That was, until the past week of computer trouble. (Trouble? How about a disaster?) Without my PC to do my usual work on, I found myself with extra time and work piling up. As I thought of ways to get around the backup, I was staring at my pile of W.I.P.'s and a severely disorganized yarn stash. 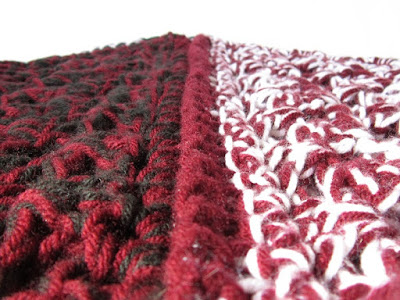 Okay, forget about the work... A few W.I.P.'s became F.O.'s (finished objects). The stash got exceptionally (exceptionally!) organized. And when I moved on to that cabinet, out came the Nightmare Afghan. 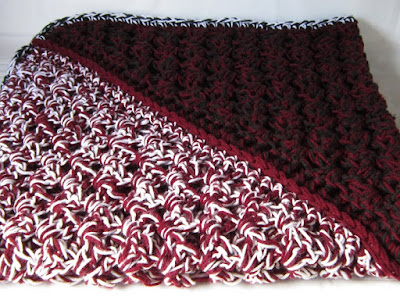 I spread it out on the bed to admire it. I made up my mind to finish it. I started weaving again. But I made one small mistake that I couldn't really control: The day I picked up the needle to finish the blanket was a day that the Other Half got off work early.


He came into the room. He said "This is nice!", and ran a hand over the work in progress.


I said "Yeah, I'm trying to get it finished already", as he climbed under my project. (You know, under the W.I.P., that's in progress?)


He said "Hey, this is really nice!" and got comfy.


Knowing he has a habit of falling asleep anywhere and everywhere, I asked him to please not start snoring (oh, he snores so horribly bad, lol!) and stop the work on my blanket, so I could finally finish it...


Well, he didn't stop me from working on it, at least! How many of you have ever finished a W.I.P. while it's in use? LOL. But I did it! It's finished! I scrapped the idea of the motif in the center and wove the hole shut with the tails. But before I did that, I couldn't resist getting the camera and snapping the first picture of my (almost) completed project in-use. He woke up at the sound of the shutter clicking. 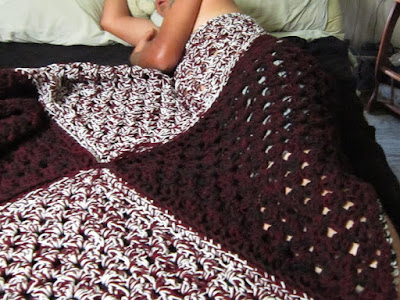 Yeah... It's my blanket, my camera, and my blog, so... That's what you get when you fall asleep under a W.I.P.! Just be glad I didn't zoom in on that drool running down your face!

Happy Crocheting!
(P.S. He already got over it.)

[P.P.S. For those of you who will ask if I have the pattern: The dog ate it.
I mean that. Don't ever, ever dog-sit and leave your work on the table. When people tell you their dog is well behaved, they're probably lying (lol), and that dog might just eat a notebook with all of your for-sale patterns. Who knew a dog could destroy over $1,000 in the time it takes to go pee? But the story of the dog that ate my (home)work and ruined my bed is one for another day...]
- September 08, 2015