Designing with a variegated, multicolored, or striping yarn can be a sensational event. Maybe it's just interesting for some, but it can become an emotional roller coaster for me. If you think that makes me sound a bit like a crazy person, that's okay... I kinda think the same thing. But if you'll allow me to explain myself, I'm sure there are plenty of you that will understand. 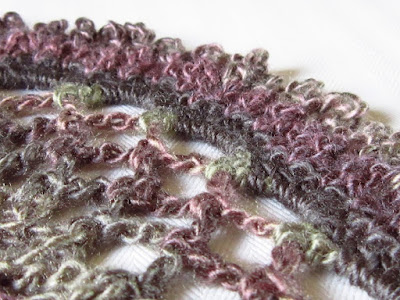 First, there's uncertainty: I think I liked this ball of yarn more when it was rolled up. I like some of the colors in this skein, but others don't appeal to me. And when it was all neatly wound up, the similar shades blended together better. Now that I'm working it in rows, I don't like the lighter mauve-purple next to the deeper whatever-you-call-that dark green.


Then, acceptance: I worked a lot to get this far in the pattern... And the design itself is beautiful. Maybe in the right light, that dark green doesn't look so bad next to the pinkish-purple. 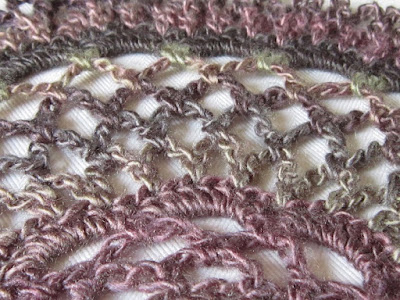 And on to the anger: I know I'm going to rip it out just because of a color change. I know it, and that's stupid. Don't rip it out. Do. Not... Argh! Why do I have to be so picky about this?


Back to uncertainty: Okay, so I probably shouldn't rip back a pattern just because of one spot of color. I mean, look at a different spot... Just off to the side of that, the purple is more purple-y, and it goes better with the green. But... What about the darker purple next to the pinkish-purple? Ooo, that's not good. I don't like that, either. 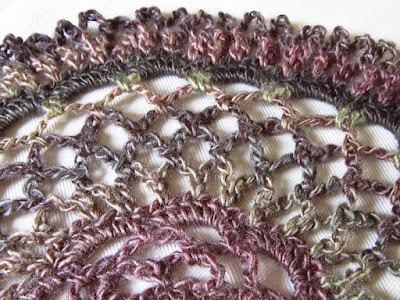 Determination: Do. Not. Rip back. Keep working, and the colors will all come together. I'm just looking at one little spot, instead of the big picture. I need to keep going, and trust in the yarn company's designers that made the color. They wouldn't make a yarn with colors that don't match... I just don't like a certain color next to another. That's my opinion, and it doesn't affect the pattern. 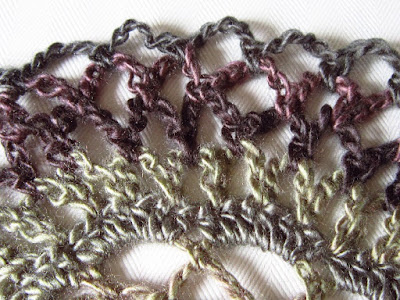 Relief: See? Isn't that better? See all the other spots of pretty, soothing color that match perfectly? They fade nicely into one another, and make me think of nature. Like, maybe dusk in the woods... During the springtime, with flowers... Next to a stream...


*Daydreaming of fairies in the woods* 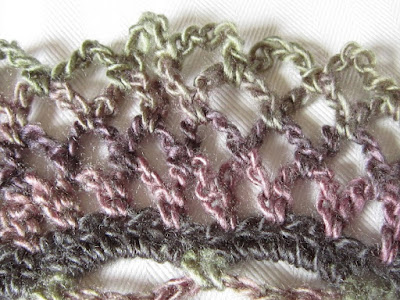 Disappointment and determination again: Who am I kidding? The pattern might be beautiful, but I hate that one spot of color. In fact, I already ripped it out while daydreaming... And ripped a bit too far. I was meaning to redesign a few rows, to try to get a shift in the color changes. But I ended up with only three rows left. Well, I might as well just keep ripping, and start all over. The way it was going, I was going to have to join a second skein anyways. I have a better idea that might only use one skein. And since it's already started, here's a sneak peek: 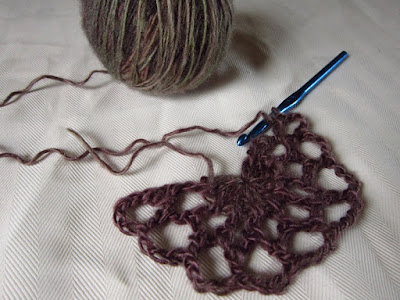 By the way, if you didn't catch what a head case I'm being over color striping, NONE of that really matters, anyway! You can never guarantee where the color will start in a skein, and there's a ton of different dye lots, too! But hopefully by changing the stitch count, it will throw off the color pooling. Don't worry, I wrote the pattern down! I'll recreate it sometime with a solid color yarn that doesn't bother me. I might be crazy enough to rip back that whole project because of the colors, but I'm sane enough to know it was a keeper :)

Things have been so hectic around here that I haven't had much time to share what I've been doing... I mean, the one big project I've been working on: The Josephina Elephant rug by Ira Rott Designs. From the time I finally received the back-ordered yarn to the point of finishing, this project took me three weeks. But interruptions aside, I only have about five days of work in it. Now, please excuse me while I toot my own horn... Can I get a "woo-hoo"? 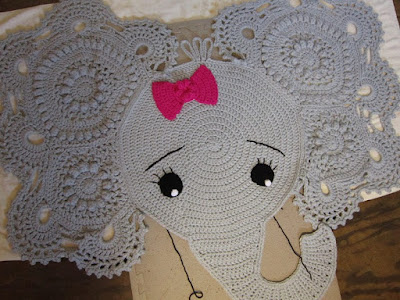 I'm usually not so proud of finishing a design that's not my own, but this one has me smiling big. The simple double crochet of the head: Got it. The popcorn and picot stitches of the ears: No problem. The joining of the pieces: Okay, not my favorite job, but I'm more than capable. So, what's the big deal about me finishing this project?


First, there is the blocking required for the ears. I shy away from large designs that need shaping because of space/cats. (Translation - If I can find the space, a cat will find its way there.) I was able to fit both pieces on the old ripped bath sheet I use for bigger patterns, and I put a firm foot down (along with some treats) to keep kitties away. 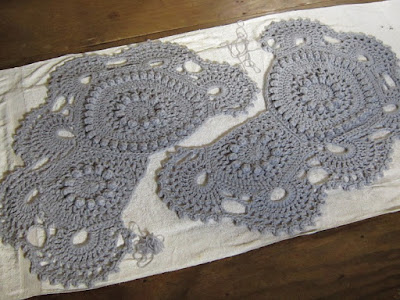 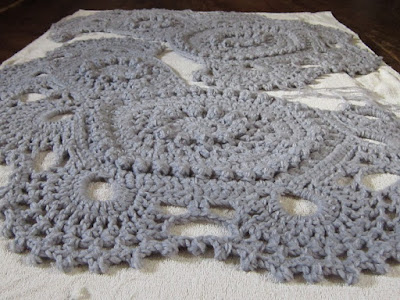 So for three days in a row, I had to move the project back out of the kitchen before the pieces had a chance to fully dry and block. The Other Half says "no, I can walk around it", but he doesn't realize that he drops concrete dust everywhere he goes. I don't need those dirty work boots travelling across this pretty pattern, so I lost some time for those few days.


It held me back at first, and then I started losing hope of finishing it. Determined to not let that happen, I decided to start weaving in some leftover ends and working on the facial features. Stacking the rest of the project on top of the ears as they blocked, I got back to work. 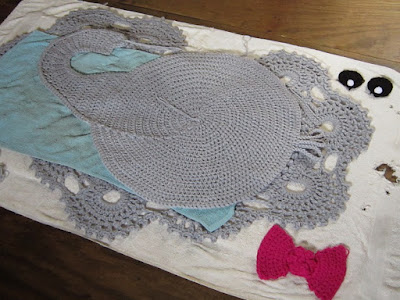 And that's when the nightmare began. Have you ever noticed that I don't create things with facial features, or anything that requires embroidery? It's because they both drive me nuts. If an eyeball is a hair off, I'll notice it. If a stitch isn't the same length as the rest, I'll see it. Not to mention my sewing skills are horrible... This is the part of the pattern I've been dreading. And as I predicted, the event began with four hours of sitting on the floor while trying to get the eyeballs straight. One is 1/8" too low. 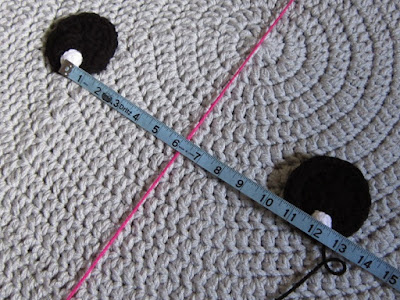 But, I did a smart thing and left my ends loose until I finished everything. It allowed me to pull out part of the first eye and fudge it over a bit so they're even... Well, even enough. I can still see where it's off, but The Other Half swears it looks perfect to him.


And I'm super-proud that I took the time to get over my fears and try to sew. I think I made back stitches where I was supposed to be whip stitching, but I got the job done without a rat's nest of yarn behind it: 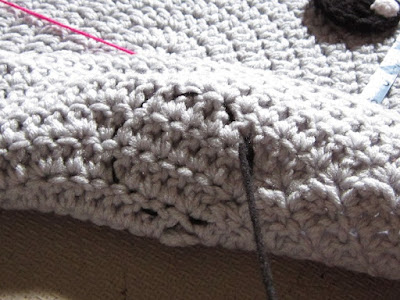 Okay, so now that the eyes are in place, I'm good, right? No, not me... I spent another hour trying to decide where to place the bow while also thinking about redoing the eyes. 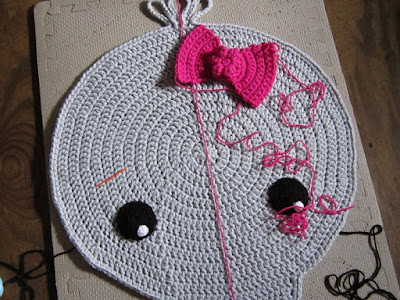 I left the eyes and the bow alone for a while, and moved on to the next scariest part: Chain stitching the eyebrows. Oh, a chain stitch? I can crochet that... Wait, what do you mean it's EMBROIDERY? No... No, I can't do that. 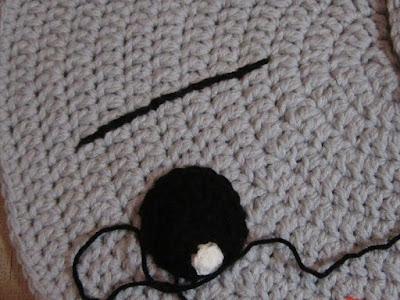 I did it, ha ha! I'm pretty sure I made those stitches backwards from the way you're supposed to, but I did it. It took me two hours of pulling the yarn back out and trying again, but I did it. And that was just for the first eyebrow...

Despite lots of ripping and trying again, I thought I was doing a really good job. Just the fact that I sewed something in a pretty-straight line was enough to make me happy. Getting the first eyebrow finished was an accomplishment like no other, and it boosted my confidence. I can do this. By counting the stitches and comparing to the first, I found the placement of the second eyebrow much easier. I chain-stitched on with newfound belief in myself. And then... 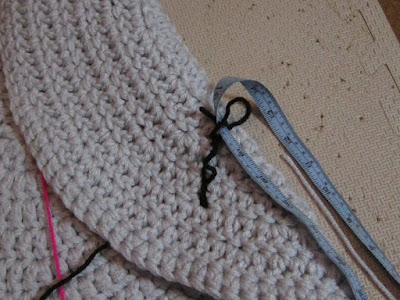 I thought the yarn felt funny as it pulled through! Since I didn't need that tape measure for the placement anymore, it somehow found its way back into my project. Oh well! I had a laugh over it, ripped out a few stitches to retrieve my tape, and moved on to finish without more mishaps. 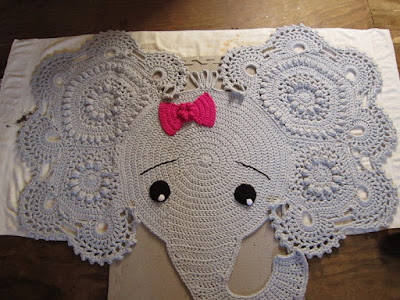 I even became so confident in my (lack of) embroidery skill that I added an extra feature that wasn't part of the pattern. Still noticing that the eyes are a bit too low and the eyebrows are a little high, I thought some cute little eyelashes might fix what I saw wrong. Using the long tails I had cut from the eyes, I made something like a running stitch to create the lashes. 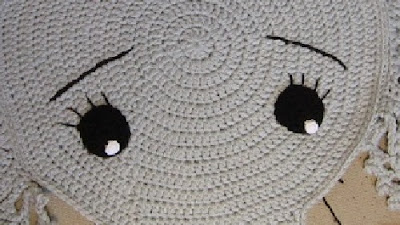 Now, let me stop tooting my own horn and explain something: This isn't a pattern that I would have made on my own. I have no desire to decorate my house with elephants, I don't want to embroider, and I hate creating facial features because it's an OCD nightmare. But I am so glad that Big Bro got me this little side job, because it pushed me to do what I avoid, and proved that I can do it.

This pattern was a treat to work. The contrast in the textures of popcorn and lace is appealing to the senses. The speed of working with three strands is rewarding. And even if I'm not fond of elephants, this rug is so cute. Big Bro said the people that ordered this will be wanting a rug for each of their other two kids. I thought I'd never take in orders again, but now I'm looking forward to it.

Uh, oh! With all the rain we've been having, it looks like another critter has made its way into my house... It's a good thing I have kitties to take care of the problem! Jump Steady to the rescue! 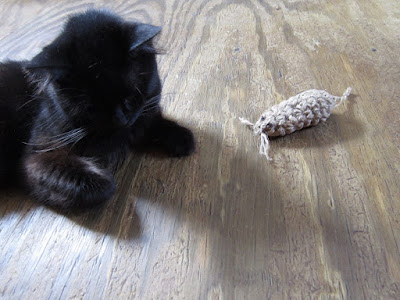 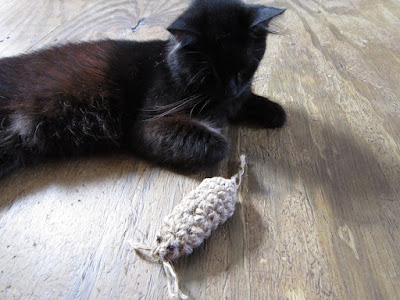 You do know that you're a cat, and that cats are supposed to chase mice, right? You should wake up and do your job!

Yes, but I'm also a cat, and cats never do what you want them to. You should know better. 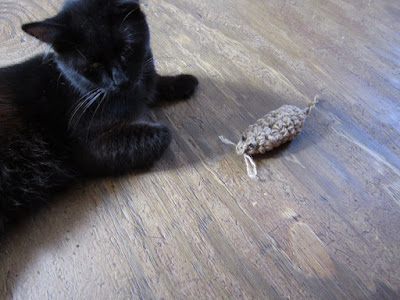 But, I think you'd have a lot of fun if you would wake up for a little while...

Fun? I thought that was only for waking you up at 3 a.m.! 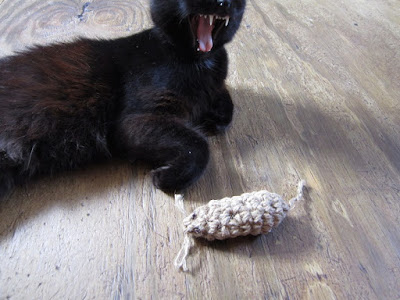 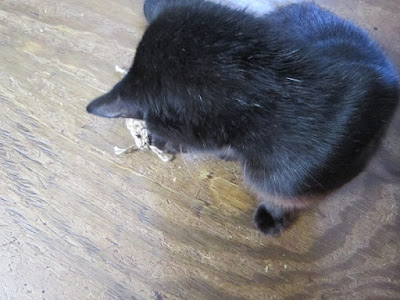 Yes, Jump Steady, but we need you to play with the mouse so it's visible in the photo. Can you try a little harder, please? 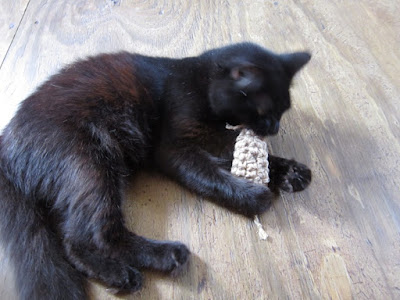 Let me get this over with faster... I'll just bite its head off so I can go back to sleep.

Well, you can't actually kill it, Jump. It's just a toy I crocheted so you will stop waking me up at 3 a.m. playing with your favorite jingle ball. 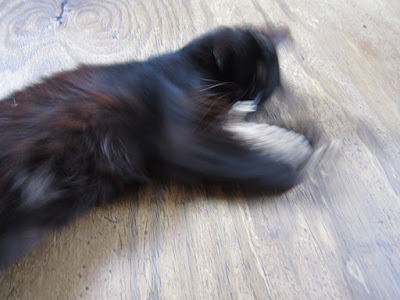 Yes, but, um... Jump, we still need a decent picture of you playing with the toy so I can use it in the pattern post! 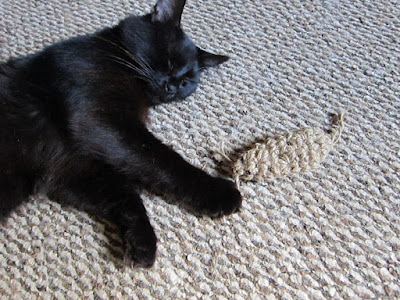 Oh, you mean this whole thing was a setup? Fine. I'll take my new toy over where it blends into the carpet. Then I'll go back to sleep... I need to prepare for more 3 a.m. jingle-ball-playing, after all...

Well, I tried. He really does love the new mouse toy when the camera isn't on him. But he is a cat after all... They only pose for pictures when you don't want them to.