It's time to start the border of the Scallop Seashell Washcloth! If you've skipped ahead to this section, then you should know that I'm using a smaller hook than the pattern calls for. You'll see a size H/8 - 5.00MM hook being used in the tutorial photos. There's going to be a lot of steps, so look for the link to the tutorial you need if you want to skip ahead (at end of post). Let's get to it! 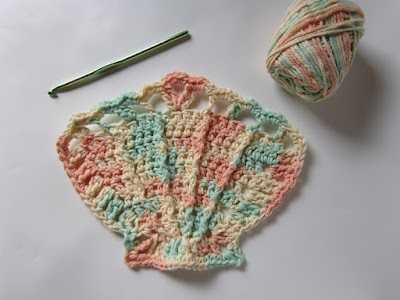 -Or, skip to the section you need:


Welcome back to the Scallop Seashell Washcloth tutorial! In this section, we'll cover the last row of the body. Before we start, a reminder again: The original pattern calls for a size I/9-5.50MM hook, but I'l be using a smaller size for the tutorial. Let's get to it! 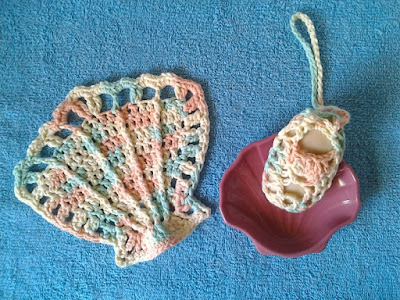 
That finishes the body, now we'll get to the border! Click here for the next tutorial.

-Or, choose the tutorial that you need:


It's finally here! This tutorial has been horribly delayed. I can't say much other than I'm sorry. Life kinda gets in the way of crochet sometimes, so hopefully you can forgive me. 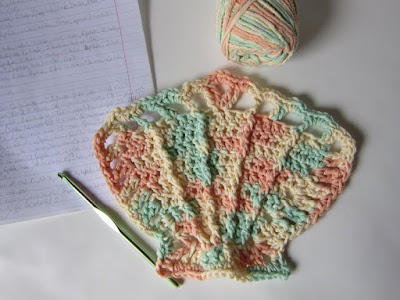 I know that the most complaints are about the sc3tog in the border, but I'm including a partial tutorial for the body, too. I'll show you how to begin it in this post. After helping a fellow crocheter figure out the border, we discovered that his stitch count was off because of a few missed stitches in the body - That's okay, it happens! If you just need help with the border, follow the links to find the tutorial you need! (Found at the end of this post.)


Before we begin, I would like to note that I'll be using a smaller hook size in the tutorial. The original pattern calls for a size I/9-5.50MM hook, but I wanted to use a smaller hook this time, to see if it makes a better dishcloth. Gauge isn't too important for this pattern, but mine seemed to come out looking a little short with the smaller hook - maybe it was just my tension. FYI: The smaller hook did make the finished pattern slightly stiffer and scrubbier. It's still too pretty to use for dishes. Anyway, let's get to it!


Clicking here will open the original pattern in a new window

Unless you want a 1,000 picture tutorial (lol, not really, but close enough), it's time to move on. Each row with front-post stitches will have a dc after the post stitch, but make sure you don't make an extra stitch after the last fpdc. Each row with back-post stitches will have increases in the beginning and ending stitches. Watch your stitch count! We'll be skipping ahead to the last row of the body in the next tutorial.

-Or, skip to the tutorial you need:

Part Three - First round of border up to first sc3tog