Working with Mainstays acrylic yarn resulted in a negative review before I was finished working on this pattern. (You can read that review here if you missed it.) I was aware it didn't perfectly match Red Heart Super Saver. I knew to not expect much from a Walmart brand acrylic yarn. What I didn't know was how the smallest difference in gauge would make this project much harder than it needed to be. 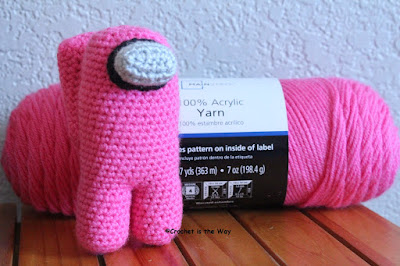 Let's just start with quality... Do you see the "seam" running up the body of the character? Well, it's not really a seam. That is the tail from starting new yarn after joining the legs, and I worked over it as I always do. The beginning of my rounds on the other side don't show as much. So why didn't I sew the backpack to this side to cover the flaw? Because the other side is riddled with a bunch of snags from the yarn splitting as I worked. 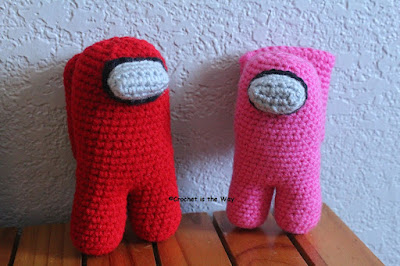 I already knew this wouldn't be great, but since some adjustments in the pattern were still needed I didn't mind continuing with the Mainstays yarn. The backpack on the first character needed to be wider, and I wasn't sure if the body needed to be shorter or if I got the placement of the visor wrong (maybe both?), but I was mostly happy with what I had worked out using Red Heart. 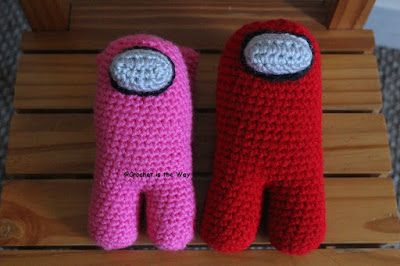 The finished size of the Mainstays version came out smaller and the yarn doesn't stretch the same when stuffing. That means I can't be sure if any of the adjustments I made will work the same when I go back to using Red Heart. Plus, I had to rework the whole design for the visor because I'm still using Red Heart to create that piece. The size of the original visor didn't match and in the end it was necessary to start over with fewer beginning stitches. I think I like how the new visor is a bit more round, so I'll still have to redo the pattern to match Red Heart if I decide to keep it that way. 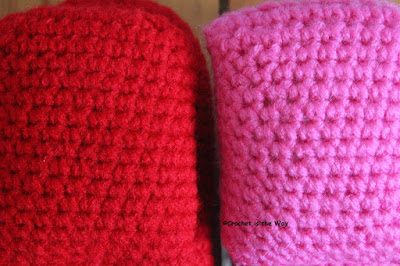 Overall, I think the version made in Super Saver looks better. If you take a close-up look at these two pieces, you can see that Red Heart fills in the gaps between the stitches, while Mainstays allows a peek through to the stuffing. Same hook, almost same pattern but with a few more stitches across for the backpack. 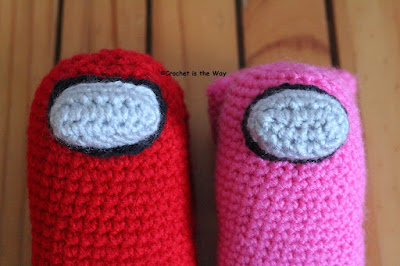 Is it possible that going up a hook size could have reduced the tension and produced a better-looking results? Probably. (I think the tension being too tight could be the cause of the tails showing through.) I chose to not change sizes because the next larger hook also didn't match the gauge of Super Saver and made the pattern larger than the original. 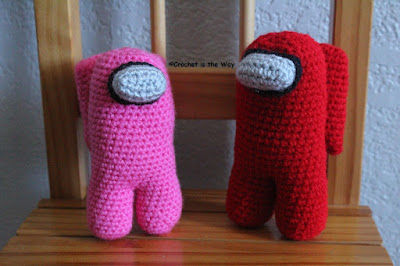 Lesson learned: It's not the best idea to substitute an unfamiliar yarn while in the middle of designing the pattern. I don't need the headache of trying to match gauge while I'm still trying to figure out the proper dimensions of the character! Do I have the visor too high? Or is the torso too tall? Something is triggering my OCD to say "this isn't right"... I just wish my brain could tell me exactly what that is, instead of just telling me I'm wrong. 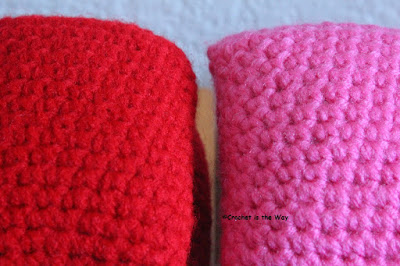 Anyway, at least I worked out the problem I was having with the backpack. The first try was close but not wide enough. It looks perfectly fine if the character is at a slight angle, but when facing forward the backpack disappears. Because every reference photo I can find shows the character at an angle, I'm not really sure how wide the backpack should be. What I do know is I always struggle with body proportions and facial features and this is EXACTLY why I stay away from projects like this!
(Deep breath...) However, It's not really as bad as anxiety is trying to make it. The backpack was fixed with a few extra stitches across and some adjustment when sewing it shut... Plus I changed the way I began the piece, and how is was attached to the character... Okay, so the backpack actually got a total redesign, and I barely noticed! 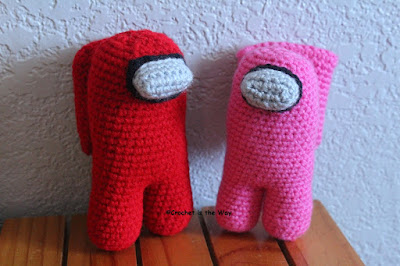 I can say I'm closer to knowing what I need to change, but using this impostor of a yarn for the second try was a mistake. I now have a skein of Red Heart Super Saver in pink (yuck), and I should be able to work out a finished pattern soon because I just have to figure out the proper dimensions and make the needed adjustments.
Sounds simple, right? It should be, but having OCD makes assembling the pieces a big pain. I see little details that most people probably don't... Like how the visor on the pink (ew) version is pinched in a bit to the left; the border around the visor on red has a thick spot where I sewed over a stitch twice. And neither one is perfectly centered. I see the stitches that got pulled at the top of the Red Heart version because I pulled a bit too hard while sewing in the tail; I see every little imperfection in the Mainstays piece from the snags and splits in the yarn, and how the top of the head is a bit too flat because I didn't stuff it quite enough.
I'll get it soon, maybe. I'm so close, yet so far away from a finished pattern because of the setback with the bad yarn... And all that other stuff, too. I know it's close enough to be called good, but I also know I could make it better. Any suggestions?
Happy Crocheting!
- February 09, 2021 No comments: