Well, I've been "forced" into creating a new crochet pattern (not really) and that would have been a fine and dandy situation if only I had the right color of PINK (yuck) in my stash... And since the pandemic seems to have reduced the stock of everything to almost nothing, I was forced to take my search for the color PINK (gross) to the Walmart yarn aisle (even grosser). And the only color of PINK (icky) they had was in a yarn I have yet to try, despite the low price: Mainstays 100% acrylic worsted weight yarn. I'm not done with the project, but this yarn has already earned itself a review...
I suppose I should add a disclaimer that I don't hate this yarn just because it's PINK (eww), but that does help me feel better about my negative opinion. Also, secondary disclaimer: Since I can't get my good camera to work right, I thought I'd try the phone camera. It was a bad idea. 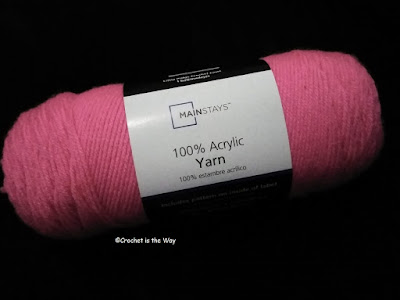 The first feel of a skein of Mainstays acrylic isn't bad. It feels like: Classic acrylic yarn. Not like the different kinds they make now that are super soft, sleek or fluffy, but plain old acrylic yarn. It's not horrible, but it's not great. When you grab this yarn off the shelf, you know you're not getting anything special. At $2.46 a skein, it's an "okay" value.
Mainstays is the brand name Walmart slaps on everything from candles to bathroom fixtures, and now the Big Box has breached the yarn market. Just like the $19.99 end tables I bought just to have some furniture, I expect this to not be the greatest product. Considering that those tables have rubbed the color off  the legs onto my carpet, I would hope this yarn might be of slightly better quality. I haven't washed it yet, so I'll have to update about how that goes. But never mind that! Let's get to the problems I'm already having... 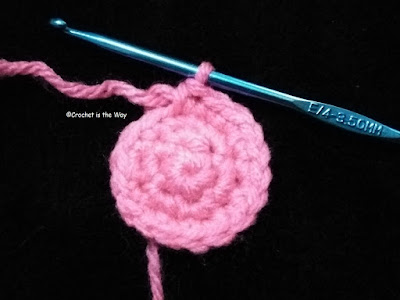 Working the first few rounds of my project was miserable. I'm using a smaller hook than usual, so of course those first rounds will be hard... But my magic circle wouldn't tighten because the yarn kept catching, I split the yarn within the first few stitches and every other stitch afterwards, and when the hook goes in between the plies it causes the yarn to untwist and split even more.
I wanted to keep working with the same hook despite the difficulty because I had already worked this pattern with another yarn... My hope was that these yarns would be interchangeable for the project. If I had a choice, I think I would only recommend this yarn as a last resort. There are many reasons why I'm not happy with the product, but let's start by comparing it to the other "cheap" yarn I'm using in my design: 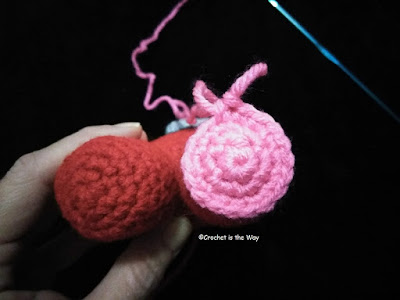 The gauge of Mainstays acrylic is really close to Red Heart Super Saver, but it's just not the same. And it's not so far off that you can change a hook size to make the difference. So even though you could use it as an alternative, your pattern will come out just slightly different. There are quite a few yarns that are perfectly interchangeable with Super Saver, so that leaves this acrylic all by itself out there in the yarn world. That means if you want to make a project in more than one color, you'll need to pick from Walmart's stock of... Five. They had five colors. One was my second-most hated color, yellow. None of the others were neutral colors. It leaves you quite limited in choices, and the only other worsted-weight acrylic the local Walmart sells is... Red Heart Super Saver, which isn't exactly the same size. 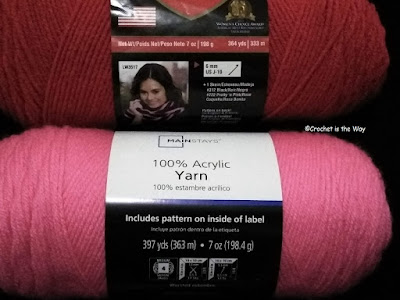 If you had no other choice, I would say this doesn't seem like the worst yarn, but I do worry that this product won't hold up to use and washing over time. There is one thing that I've learned to look for when buying a new yarn, but it requires comparing it to something you're familiar with. Look at the details of these two yarns... Both yarn labels claim to be 7 oz. (198 g). Red Heart Super Saver says this weight will equal 364 yds. (333 m), while Mainstays acrylic measures out at 397 yds. (363 m).
More yardage equals more value, right? WRONG. A ball of yarn that is that same weight but different yardage means one of two things: Either it's a different gauge yarn that is slightly thinner than what you're comparing it to, or it is the same gauge yarn but contains less fiber content. I've found that if it's the latter reason, the yarn is usually loosely plied and splits easily. Typically it will also have that halo of loose fibers that will eventually turn into pills. And look what we have here: 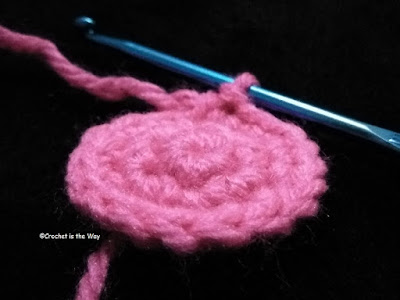 That telltale halo is quite visible even when worked with a smaller-than -usual hook. Also, those little fuzzies are making it extremely difficult to work this project with the small hook. My work alternates between making a stitch, catching on fuzz, splitting the yarn; repeat. Because I've already created the first prototype with Red Heart Super Saver, I know this project doesn't have to be so frustrating.
Now, let's talk availability and price: Another downfall of Mainstays yarn is that you can only get it from Walmart. There are more colors available online, but as I mentioned there is a very limited stock in my local small-town hellhole. Now that I've moved, my only options for a craft store are one town south (the old hometown and not a really long drive) or one-and-a-half towns and one blinking yellow light north (about a 45-minute drive).
...And then there's Walmart. The only other "grocery store" is a Save-a-Lot if that tells you how little there is here. There's a Mexican store that sells food too, but you can never get in there to park because it's right next to the bingo hall. But we have like four "dollar" stores! So anyway, enough about the town and back to the yarn...
(Ooo, wait, I forgot to mention the PUBLIC shuffle board courts! Please help me...)
Because I just wanted the right color of yarn right now and I stupidly thought a ball of some average PINK (gag) Super Saver shouldn't be hard to get from the Big Box Bastards, I had my mind set on leaving with what I needed for my project. Since the price for Mainstays ($2.46) was less than Super Saver ($3.44), maybe it would be a better deal, right? WRONG again. If you fight the pull of I-want-it-now Big Box Brain and do some internet shopping, you can currently find Super Saver at Joann's for $2.77. It's still more than the Mainstays yarn, but I'd rather pay the extra 30 cents for something better. Let's take an even closer look at this yarn, shall we? 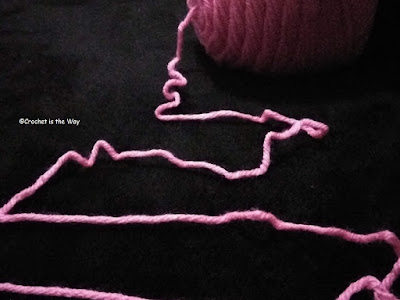 The beginning of this skein pulled from the center with no problem. It took me like half a second to find the tail, and I've yet to find any knots or tangles. That's the best thing I can say about Mainstays! The beginning of the yarn was a bit kinked up, but that's no big deal, right? WRONG! (You've probably learned by now that's always the answer.) Taking a closer look at each of those crimped areas, you'll see loosely plied spots in the yarn, broken plies, and a slub-like formation that I think is extra fibers that got stuck in the machine and wound up back in the yarn. 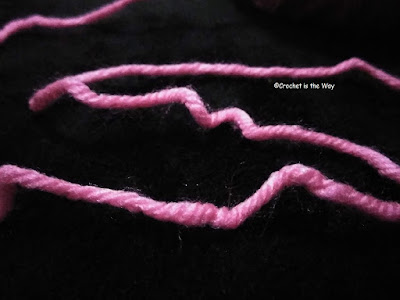 Comparing it again to Red Heart Super Saver, you can see without measuring that Mainstays has less wraps per in (WPI). Since there are all those spots where there are like NO wraps per inch, it's kind of hard to put it up to a ruler and actually measure the WPI anyway. The farther I work into the skein, the quality of the spin has not improved, and those slub-like spots are leaving bumps in my work. 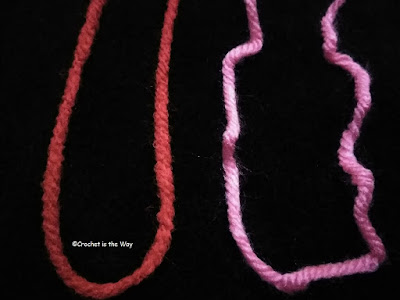 To conclude my review, I think you could make stuff with this yarn. I wouldn't make anything wearable or something that will see frequent washings, but maybe you could make doilies or bags or rugs with Mainstays. I don't think it would be a good yarn for beginners because of the splitting. And did I forget to mention the squeaking? Working with Red Heart and the small hook was more difficult than I care for my work to be, but the Mainstays is irritating me to no end because with every stitch it makes a squeeeeeak sound that's something between a dying chicken and nails on a chalkboard. Do not work with this yarn near anyone with misophonia or if you have it yourself! I do not have this condition and I find the noise so annoying that I have to wear headphones while working.
Given the chance to make the choice again, I would have taken my shopping trip online and waited for the product I wanted. I don't feel like I got a good deal with the cheaper yarn, and I'm not satisfied with the results of my project. I'm not working on this just to have another pattern to post, but because my son specifically requested for me to make him something.
If it was just for the creation of the pattern, I would still use this yarn to create a finished product because I could use it as an extra in photos. But to use Mainstays for something that's actually for somebody and will get used as more than a prop in the background of a picture... I'm just not satisfied with the fuzz, bumps, and overall uneven look that my current piece is showing. I think for a similar or lesser price, there are better "value" yarns available among us. 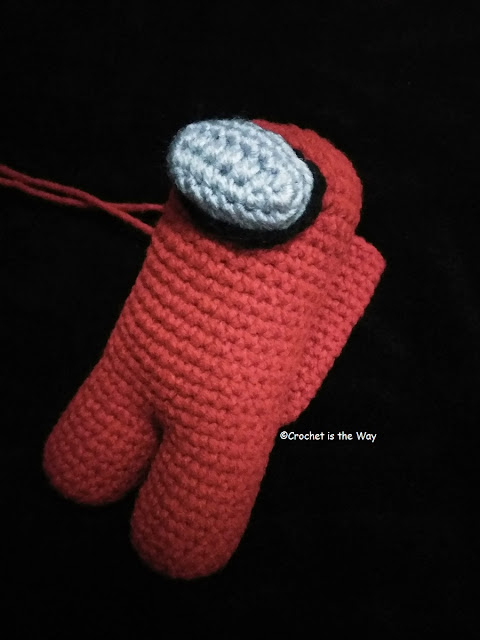