A hoard of plastic grocery bags has already started piling up in the new house. I absolutely refuse to let an entire closet get packed full of bags again! (Well, it was only the bottom-half of the closet...) A sane person would probably go dump them in the recycling container at the grocery store. But of course, I chose to punish myself by beginning a massive plarn project: 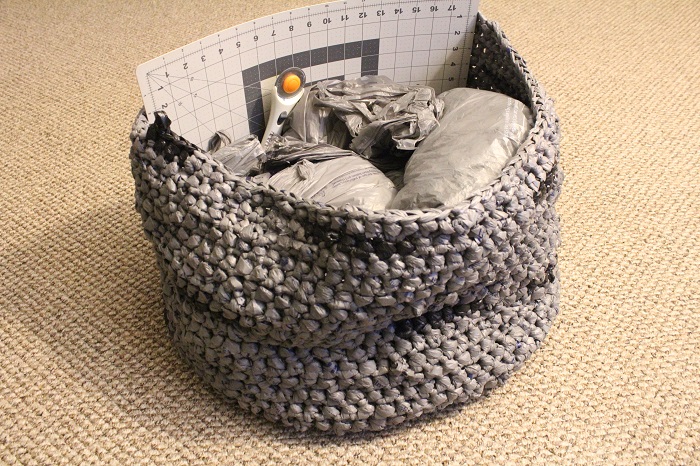 It doesn't look so daunting sitting there all by itself in a picture, but this one has turned out to be a monster. A long-envisioned project, I always knew this plarn floor pouf was going to be a big job. That's why it had always been a "long-envisioned" project instead of an "already-started" or "finally finished" project! Why, oh why do I do these things to myself? I should have known better. 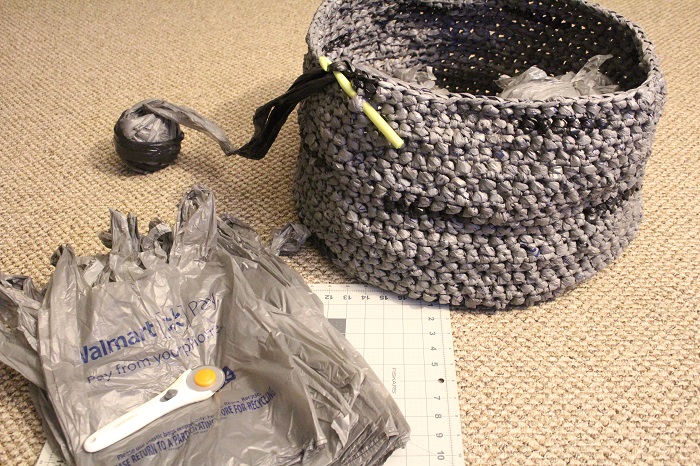 I'm creating a bit of a color pattern by using 15 grey bags, then one black bag. And I'm being serious about it, replacing broken pieces along the way so I can keep the color repeating the same all the way around. This is partly so I'll be able to go back and count exactly how many bags were used in the project, and also so that it doesn't look too bad and I'll be proud to display it as part of my home decor. (If I EVER finish it!)

I began with a flat circle in half-double crochet until it measured around 20" in diameter. The splashes of black were random during the increases. The color pattern began repeating evenly once I started working even to create the sides. Each group of 16 bags works into one round, plus about 5 stitches. I'm currently on what I thought was round 32... After counting the bags by color changes, I think I'm off on my count. There's 8 dashes on the flat bottom (128 bags) and about 20 vertical rounds (320 bags), so no matter what round I'm on, I'm getting close to 500 bags in the project! 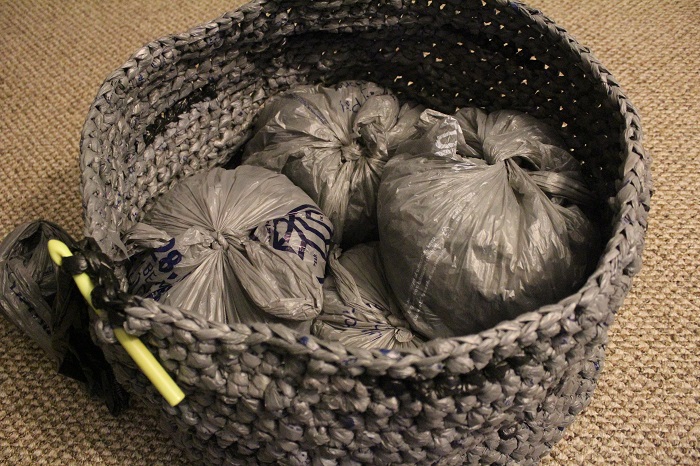 Oh, and there's the stuffing: Any pieces of the loops that break while joining, bags that aren't fit to cut up for material, and all the tops and bottoms that get cut off to create the plarn. With the extras thrown into the filling, I'm probably over 500 bags already. And I've still got a few more vertical rounds to work for the sides, plus the top will probably use the same amount as the bottom. I'll need some extra bags to make up the stuffing, so I wonder if I can end up with 1,000 bags in one project? (Side note: It's time to make some reusable bags.)

My original hope was for the pouf to be stuffed only with bags, but as it grows I'm thinking I might have to use some stiff foam around the edges to help it keep shape. I'm afraid the smaller pieces of scraps will work through the stitches, so I'm tying them up in more bags to keep the mess contained. Unfortunately at this point it looks like those bags of scrap material are going to make some bumpy filling. No matter how much I squish or smash them around, the bags of bags just won't settle into a perfectly round shape to fill out the edges.

Once I get closer to finishing, I'll try stuffing the edges with loose bags and keep the bags of scraps in the center. Maybe that will squish out in a smoother shape while the scrap bags can give more density to the middle. And if that doesn't work, then there's an old yoga mat out in the shed that would probably make a great lining, and I could still consider this project 100% recycled material. 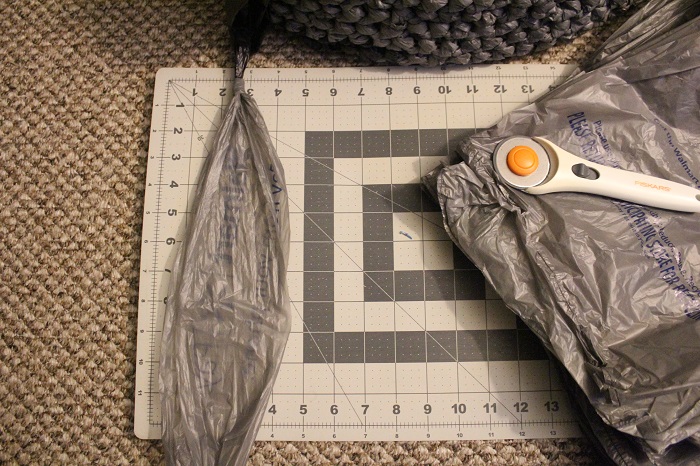 Those minor problems aside, the big issue I'm having with the project is my choice in material. I'm using "giant plarn" again (check out the Giant Plarn Rug pattern), but this time I'm using a hook instead of finger crochet. It's really hard work! The plarn is cut 4-5" wide and I'm using the loop method, so the material is double-thick. I'm working with a size P/10mm hook to keep my stitches tight, and there's a lot of resistance using a plastic hook with plastic yarn.

The hook digs into all the wrong places of my hand and my arms get tired from moving the project as I work. The bigger it gets, the worse it is to work on. Just think: This is only a floor pouf. Originally, I wanted to make a full-size bean bag chair of plarn. NO WAY! I'm glad I settled for the smaller version since my sanity is already close to the edge... I know that to be a fact, because I'm considering making a second floor pouf to match. Wouldn't it be cool to have one for each end of the couch we still don't have yet?

PS Dear friends, I began this project and this post before "the news" came out... I can't stand listening to the news right now... If I hear the "C-word" one more time I'm gonna jump out the window. And that would do me no good because it's only about a 12-foot jump and I'd probably just end up in the hospital with a broken leg and then I'd get the corona - oops, I mean the C-word .

Jokes aside: I don't want to say "it" because I'm tired of hearing the C-word. I really didn't want to write about it, but we all need to vent sometimes, right? Feel free to click off if you're sick of hearing about it, too. I'm sick of people acting like morons and hoarding toilet paper. I went shopping yesterday and couldn't even get a simple bottle of dish soap because our local Walmart isn't enforcing limits on items and people have hoarded the store empty of everything (sparing anything in the health food section). Last week they were allowing people to purchase entire carts full of gallons of milk, this week they have signs up stating there is a limit of one, but they're letting people go through self-checkout with however much they want.

But don't worry, they do have an employee at the front of the store rationing out sanitizing wipes for your cart!... The lady dropped ours on the floor, then picked it up and tried to hand it to Rip while making direct eye contact, like "you didn't see that, did you?" And he just stands there looking at it in her outstretched hand as if it's the plague itself. She says "this is to wipe down your cart" in the way one might speak to a child, and he just stood there looking at it for another good 30 seconds before she threw it away and got another one. She knew what she did.

Also, there is no cat food. Please... Please tell me people are just hoarding for their pets as well and some folks aren't choosing drastic measures over what's left in the health food section!

Towards the end of my shopping trip, I had a brief conversion with a little dude's mom over the lack of bread. Little dude jumped in and said "It's so stupid! Everybody should only take what they need and leave the rest for people that need it. People just need to isolate for like TWO WEEKS, it's not like it's the end of the world or something!". Ladies and gentlemen, I'd like to nominate this 9-year old for president... If that kid can get it right, what's wrong with the adults? (Also, I hate the fact that "isolate" and "quarantine" are now part of an average 9-year old's daily vocabulary.)

Be smart. Stay safe. As crafters, I think we have an advantage at keeping ourselves entertained. A creative mind can take you to all kinds of places. I can't personally relate to the people that are going nuts from boredom while in isolation. (I already live my life that way and I think I prefer it.) But I can understand the stress of your whole life changing and you having no control over it; I sympathize with the people leaving stores empty-handed; I can relate to everyone's fear of catching this virus.

Maybe we're not all on the same page, but the world is united in a fight right now. Let's all try to stay level-headed and get through this the best that we can. It's really hard for me to put into words something like "my heart goes out to anyone affected by this", because it's like the whole world affected by this in one way or another and that seems like such a shallow blanket statement compared to the depth of the situation. So whatever it is I'm trying to say... I mean it.