I couldn't help it... The local discount store sent out a flyer that listed Bernat Blanket yarn for an awesome price. I didn't need more yarn. I just need to finish my house so I can unpack the yarn I still have. But I just couldn't help it! I only went to the store to see what colors they had available, and somehow a bunch of it ended up in my basket. Oops! Well, long story short... A blanket happened: 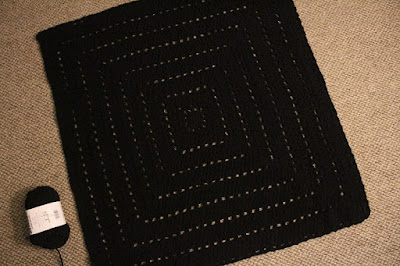 I'm only faking the guilt. It felt good to buy yarn all in one color (my favorite color) to make a blanket that I want. It's plain, it's black, and I love it. It is also very, very warm! I've wanted to work with Bernat Blanket for a while, but always found it a bit out of the budget for the amount you get in a ball. (It made my Wednesday Wishlist back in 2015 and I still haven't tried it!) Since I didn't get a chance to go to Ollie's until two days after the sales flyer was released, I expected to find this yarn already gone. I lucked out and started digging through a box full of yucky bright colors to find all I could find...

Eight balls of "Coal". Only eight. Remaining colors: Bright pink (yuck), bright yellow (ugh), bright green (blech), and orange (NO). Not a single ball of a nice color like grey or white. So I hoarded the last of the good color and hoped I could make something from it. 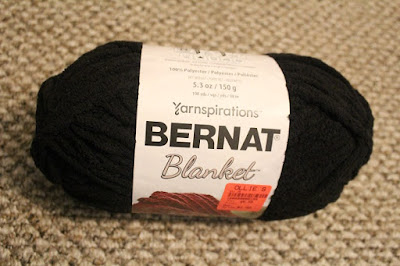 I was worried about buying it from the discount store. The motto at Ollie's is "Good stuff cheap", and I love the place... But I've found that not all of their stuff is so great! I had a frustrating experience with a box of trash bags that were split up the sides, and I would never consider buying their "slightly irregular" clothing (some of which looks more like factory defects), but I had to take the risk with this yarn. 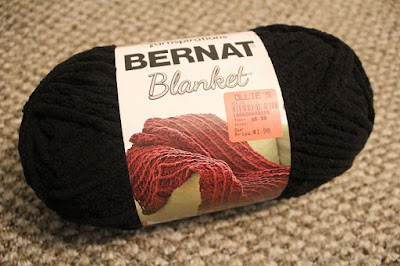 Including tax (7.5%) brings the total back up to $14.56. I think I could afford to buy a few balls at full price if I ever decide to make the blanket a little bigger. Who knows? Maybe I'll find more on discount again some day. 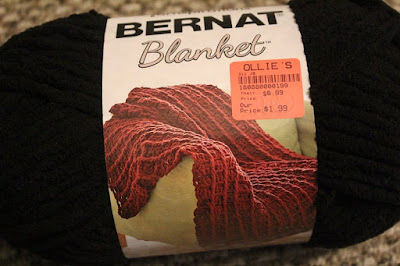 As for my worries about the quality of the yarn, I have no complaints. Each time I started a new ball the center was extremely hard to find and I'd end up pulling half the ball out before I found the end. That's an issue I've also had with similar yarns so it was kind of expected. And there were a few balls that had knots between about three feet of yarn... That's always annoying but I've had the same thing happen with almost every yarn I've ever worked with. I can't condemn it for either of those small problems. 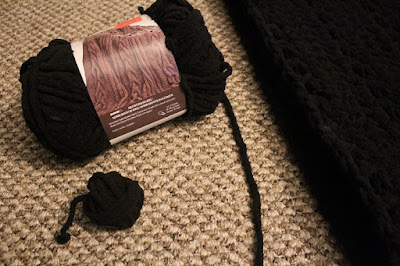 The only thing I'm really disappointed about is that the color isn't worth much for taking photos. I thought this would be a good pattern to share because I was able to work out a 46" by 50" throw with only eight balls of yarn. But if I can't get better pictures, it discourages me from finishing a post with a pattern. 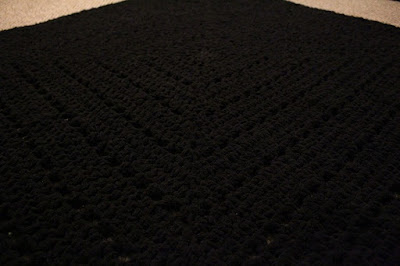 Even though I like the feel of Bernat Blanket, I'm not interested in purchasing more unless I can get another awesome deal. It's soft. It's fluffy. And it's so heavy! It washed and dried like a dream, but it's sooooo heavy. It's really warm, and heavy. At only 46" by 50", it's like one of those weighted blankets. I thought about buying more to expand the size, but I fear making it larger might suffocate me in my sleep.

It's the first official completed "just for me" crochet project in the new house, and I'm proud of it. But I think this throw will never get much more use than being an accent piece on the couch or a chair... If we ever get furniture! We're still sort of camping out in the living room with a futon for a bed and one of those cheap card tables with my two computer chairs for a dining set. Including the $3 deflated bean bag chair I found at the thrift store and our two plastic patio chairs, it's quite the setup.

Which leads to house updates: Nothing! There's no progress made on installing the flooring because I'm still stuck on the laundry room disaster, but I've made the decision to hire an electrician to deal with the outlet and then we'll see if we can work out the vent afterwards. For now, my dryer plugs into an outlet that just sits on the floor and I have to stick the vent out the back door every time I do laundry. Eh, what's the rush? I'm sure that setup is entirely safe and up to code. 😬

The good news is that Rip van Winkle went out and bought a new TV, so at least we know what his priorities are... Same as always: Turn on the TV; fall asleep with the TV at full volume; snore loudly and continuously to compete with the noise of the TV. Some things never change, but electricians can be paid to change outlets.