From Crochet to Construction Worker

After another lengthy absence from the blog, I have a ton of WIP photos to share with you. However, there's not much crocheting going on around here anymore! I can't say I'm not crocheting at all because I have had a few projects on the hook recently... But for the past year my main job title has gone from crocheter to construction worker. At least I can share with you the first completed (crochet) project since we bought our nightmare new house: 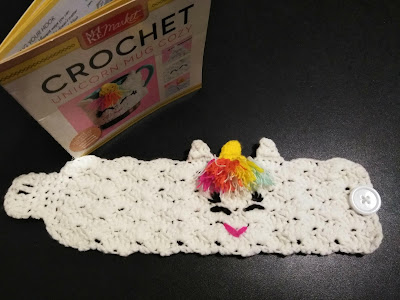 This crochet kit has a short story: My stepdaughter is learning to crochet (yay!), and she asked for some help with this "easy" project. I'll give that kit a short review of "not for beginners". Requiring single, double and triple crochet stitches, along with embroidery to complete the facial features... Plus fringe and sewing on a button? I wouldn't consider this an easy project for a beginner! (It wasn't all that easy for me with the sewing and embroidery, either.)

Sure, the package contains everything you need, but much of it fell short on quality. The DK weight yarn has a loose twist that splits easily, you barely get enough yarn to finish the project (no room for mistakes), and even the included yarn needle had a too-small eye that made threading the yarn a pain.

That's all the crochet I can share with you after almost a whole year. The rest of my "WIP" photos might be a warning of why not to buy a foreclosure house unless you're prepared. The good news is that we're moved in now, but the bad news is that we're living in the middle of a construction zone. Boy, does this house have a long story which will require more than one post to finish! Here's a great place to start: 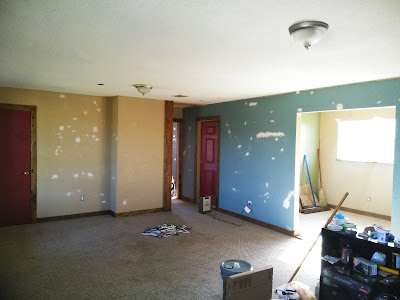 I prefer to not have more colors on my walls than in my yarn stash. Painting the house was the easiest thing I could get started on, so as soon as we got the keys I began filling all those holes. Even that couldn't be an easy job because of the weird things I kept finding along the way, such as "what is this wire for and why was it painted to the wall?" and later discovering that every window had one of those wires painted to the wall around it. Thankfully, we learned it was just for an old security system. It was easy to cut the wires off the rest of the way and patch the remaining holes. 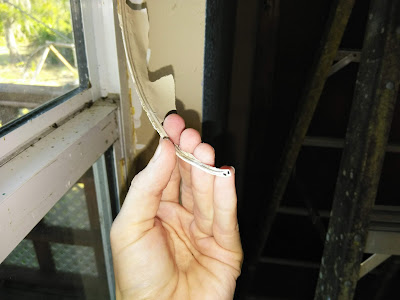 So why couldn't the previous owners do the same before they painted? More on that later... There are so many questions we'll never answer, like: Who thought it would be a good idea to hang that shelf (the bulky thing on the floor) from nothing but drywall? Why did they remove almost all the kitchen cabinets? (Not shown in the next picture: Why did the remaining cabinets not go all the way to the wall even though the counter top did?) 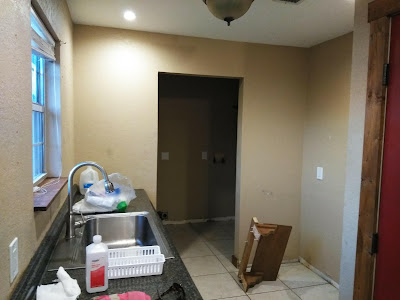 Maybe the answers were in the biggest question I kept asking while working: What is that smell? Marijuana was that smell and it would get really heavy at times, overpowering the scents of urine (yuck) and what I presume was carpet powder used to cover the smell of the urine. Once we started finding drug paraphernalia stashed in random places, I stopped trying to answer the questions of why. I just assume drug use had something to do with forgetting to paint the walls all the way to the ceiling: 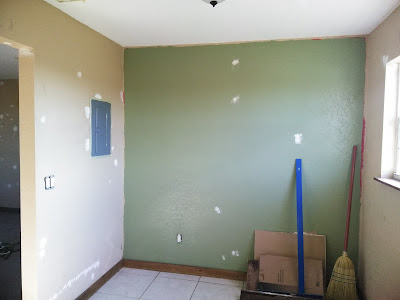 As soon as we found the burnt glass tubes stashed under the edges of carpet and in light fixtures, the answer became even more clear: This wasn't absentmindedness caused by smoking weed... We're dealing with some screwed up crackhead stuff here. That helps explain the window sills that fell off because they had been glued on, along with the double light switch that only operates the exhaust fan in the bathroom while the real light switch is on the other side of the wall: 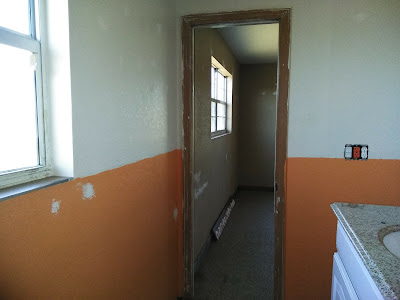 Should I bother mentioning another color on the walls, or the vanity that is chest-height on me? Oh, there were so many more problems just in that bathroom alone. But we can move along, because there's plenty more problems rooms to tour. Yup, plenty of rooms that look like the walls were used as a dartboard: 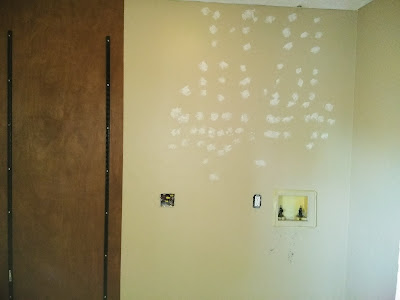 I've patched a lot of holes and I've covered a lot of colors. I now have the experience to inform you that it takes two coats of primer and two more coats of paint to cover a color like this: 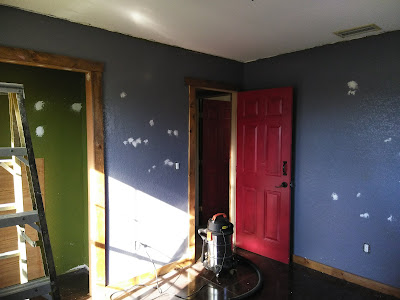 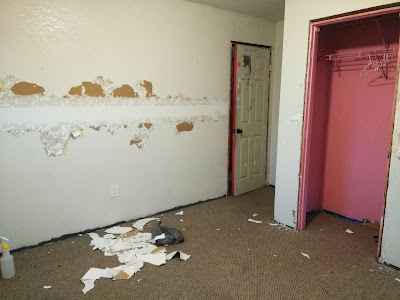 The most I can say about that situation is "UGH". Let's move on to what we found when we removed (what was left of) the kitchen cabinets: 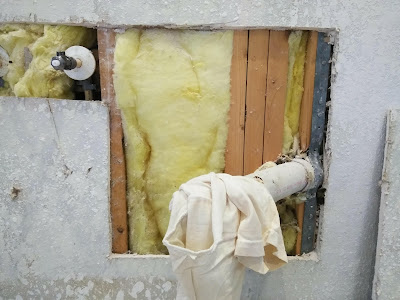 WHY? What were they thinking when they cut through a main stud in the wall to fit in a diagonal drain pipe that is ridiculously far away from the water lines? I know exactly what happened here... They moved the sink over from its original location, and had enough skill to move the water lines. But when it came to tying in the new drain pipe to the (much-needed) vent pipe... Um, NO. That's not how you do it!

Thankfully, Rip van Winkle has enough plumbing experience to fix that problem. It took some thinking and some fighting with it, as well as a few trips to the hardware store, but we finally got that situation straightened out: 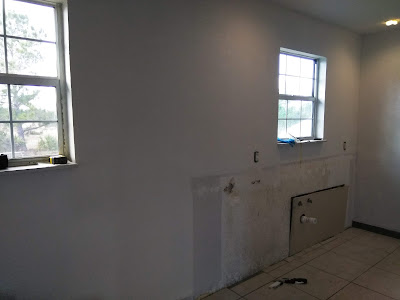 And with my skill of patching drywall, we turned it into a proper-looking and proper-working kitchen sink... Well, I guess it's still just plumbing in this photo, but now we're able to use our fully-functioning kitchen! 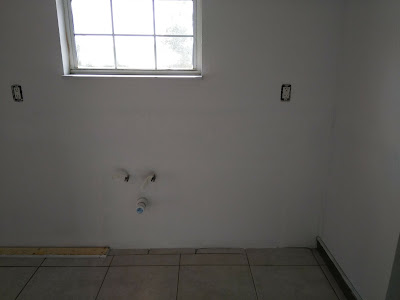 There are still a few major problems to work on, such as the other bathroom: 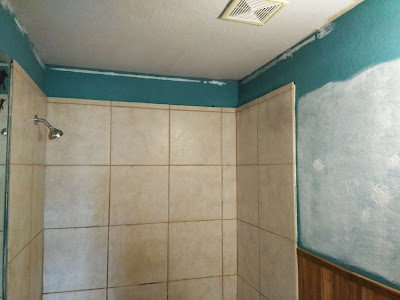 Yes, those are floor tiles used on the wall; and no, they didn't put them up the right way so they are falling off. Oh yeah, and there's another color! Not shown, I already painted the BEIGE ceiling. But who cares about the paint color when tiles are falling off the wall? (PS, grout goes in between the tiles, not over them.) I won't even show you the state of the tub in there. It makes me gag every time I look at it. Plus that tub's drain isn't plumbed into the pipe... Ugh, the whole bathroom needs to be renovated, but at least now we can use it as a half-bath. 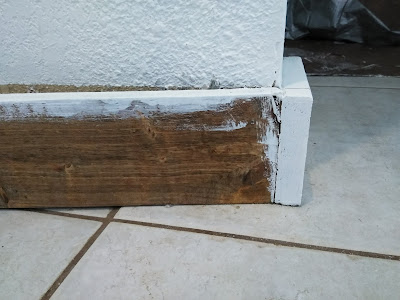 And there are other minor problems I've already fixed, like how this door casing was on top of the light switch cover: 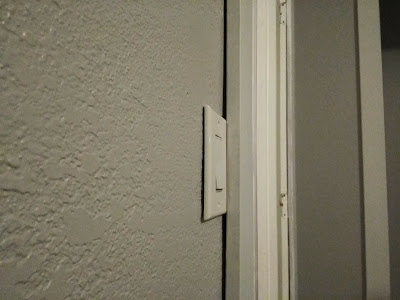 Actually, fixing that wasn't so "minor" after all! The doors shown above and below both needed to be replaced along with their frames, which I had a basic idea of how to do. The job ended up being more difficult because I chose to save money by going with a frame kit instead of buying a ready-hung door in a frame.

Well, I learned how to build and install a door frame! And the previous owners had already provided an example of how NOT to do it: 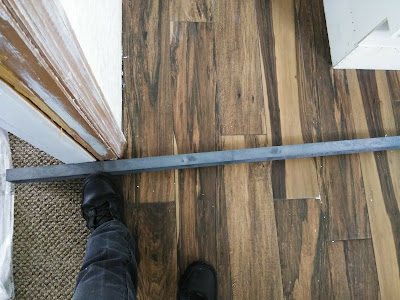 Oh, and we saved more money going with the frame kit because I ended up finding the non-existent bathroom door hanging on the air-handler closet which is located right in the middle of the kitchen. I guess they figured since the door couldn't close in that messed-up frame, they might as well use the door somewhere else. Because who needs a bathroom door, right?

But the frame for that closet wasn't made for a doorknob to latch in, so the door didn't really close there, either! I reclaimed the door for the bathroom, and we purchased a much-cheaper bi-fold closet door for the air-handler. While Rip van Winkle was installing the bottom piece for that, we found the strangest situation yet: 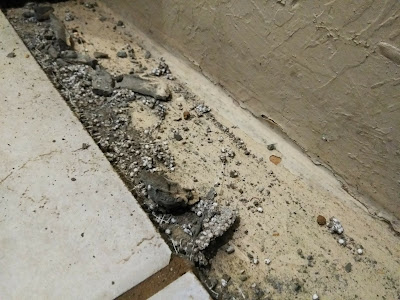 Is that Styrofoam under the tile? WHAT?!? It took me a while to finally figure it out. We were purchasing the supplies to install some laminate flooring, and I saw the underlayment... That's the Styrofoam stuff we found under the tile! Why would they put that under tile? Oh, I figured that out soon enough: There's another layer of tile under what you can see. They tiled over tile. And in between the two layers of tile, they added a layer of the stuff you use under laminate flooring. It's like that in both bathrooms and the kitchen. UGH.

Well, it was easy to decide that ripping out two layers of tile is a renovation that will have to wait. For now, we'll keep dealing with the flooring that pops and cracks as you walk on it. You just have to be careful when in bare feet, because the chunks of grout that keep breaking out really hurt when you step on them.

There are so many more messed up things I could share about this house! I was hoping to get to some before-and-after photos soon, but I have a whole 'nother post worth of "what we had to fix". I'll simply finish the complaining the "WIP's" with the most confusing thing I can't stop thinking about, even though it doesn't really matter one bit... How in the hell did they get this nail in the wall like that? 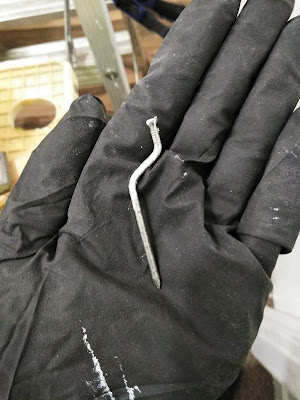 Okay, that's more than enough for one post. I wanted to put a "big reveal" together when the whole house was done, but it looks like that will be a while! For now, I'll give you a sneak peak at how my (self-designed) kitchen turned out: 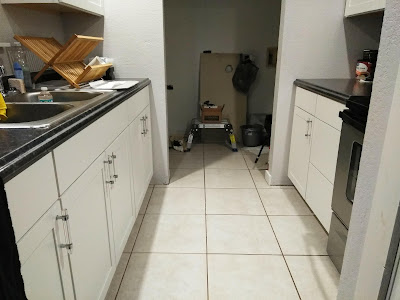 There are handles on those drawers now, too. And last weekend, the mess in the laundry room got turned into a washer and dryer! There's still so much left to do, but it feels so good to finally have a place to call "home" again. Until next time...

Happy Remodeling!
Oh wait, I think I can remember how this is supposed to go...
Happy Crocheting!
😉