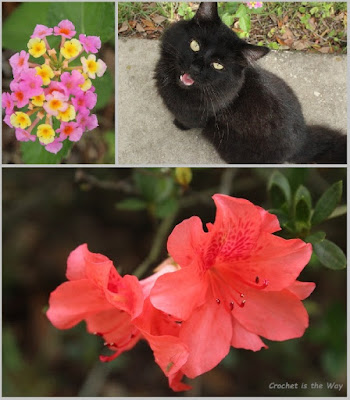 A sleepless night of crocheting led to a few finished projects. (5 hats!) I should have been spending the day working on writing a pattern and weaving in a few leftover loose ends, but a feeble attempt at sleep ended in a brain that's not fit for counting. I went outside to clear my mind in the mild fall air instead. Something caught my eye that made me go back in for the camera... And what was supposed to be "one quick picture" later, I have a few snapshots to share: 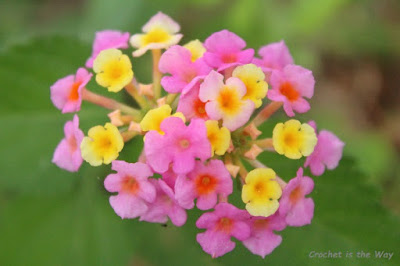 A guest plant has made a surprise visit to Dad's yard... A little wild lantana (shrub verbena) popped up next to the driveway! As a child, I thought these flowers were extra-special because one bloom is like a miniature bouquet of multicolored flowers all on one stalk. It was difficult to pick these "magical" blossoms because of their many sharp thorns, so most were lucky to be left alone to grow.

Back in those days, I would find a mix of the multicolored variety along with solid yellow ones. Little did I know how special those bright yellow flowers were... A Florida native, l. depressa is now on the endangered list of plants that are getting harder to find. It's quite common to spot l. camara (the multicolored ones) growing along the sides of roads here in central Florida, and apparently they'll work on taking over your yard as well. 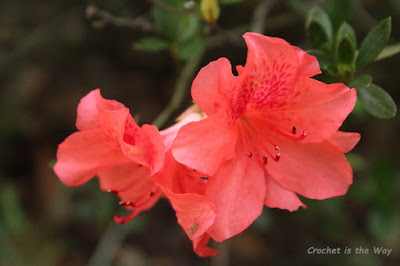 Already having the camera out, I decided to get some shots of Dad's azaleas. This salmon/orange variety makes a beautiful specimen for practicing photography. 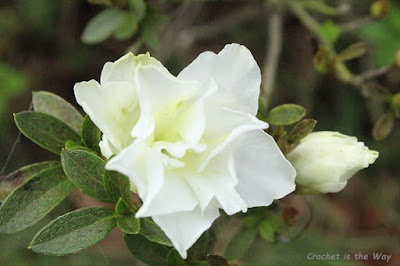 The same flowers in white made for a challenge! I found it difficult to find the right settings to avoid washing out the picture, and a mild breeze picked up while I was trying. Originally I adjusted for a lower ISO and longer shutter speed, but kept getting a blurry picture due to the wind. Eventually I got an almost-perfect shot with a higher speed of 1/2500 and the ISO at 6400. 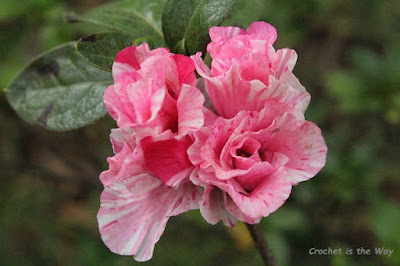 The same setting got me an awesome shot of this pink variety without having to worry about blurry blossoms blowing in the breeze. 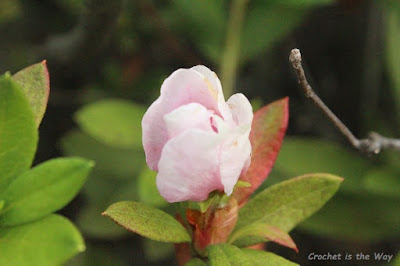 And I tried my hand at a closeup of this little bud, but found the photo just didn't have much aesthetic appeal for me. I got bored with the azaleas and started to review my photos, and that's when I noticed a little green bug had been hanging out on the lantana in some of the best shots. I wanted to try again without the photo-bomber, so I went back to the driveway... 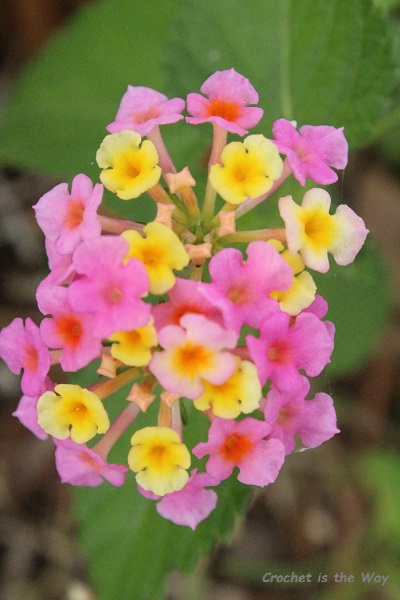 The auto-rotate function on the camera got me again! I leaned over too far trying to check for that bug and got a vertical picture. I should have been paying more attention... I have no idea what could have distracted me so much... 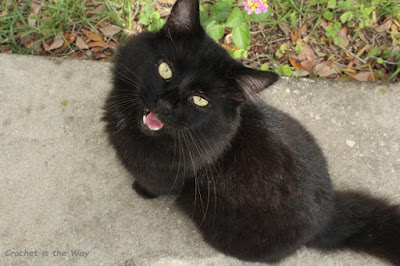 Oh, yeah, maybe it's that... "ME!!!" said Jump Steady... "You're supposed to be taking pictures of ME!!!" Obviously, any further photos of the lantana were forgotten as soon as the cats realized the camera was out... 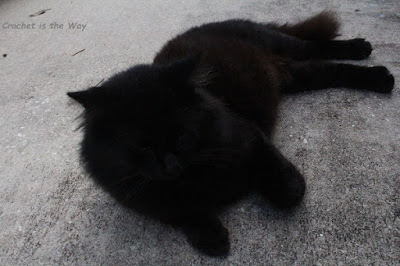 Of course, as soon as the cats had my attention they had to act like I was bothering them. With the photo shoot interrupted, Jump Steady felt it was a good time to go take a nap. I went back to see if there were any more interesting blossoms on the azaleas I might have missed... 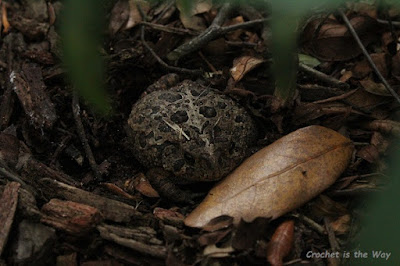 And found something interesting, indeed! Another guest has invaded the yard, making a home in the mulch under the azaleas. Aw, this little guy makes a cool picture, all camouflaged in his not-so-hidden burrow... 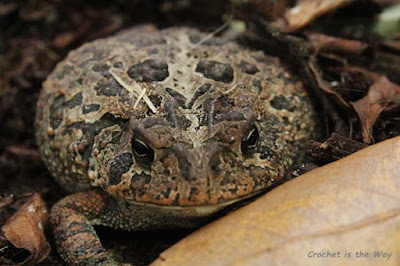 But Mr. Toad wasn't so happy that I was bothering him. He started to ooze some stuff out of his warts, and I don't speak Toad but I'm pretty sure that means "leave me alone". It's also gross. I'm almost positive that this is just the common native southern toad which is harmless, but I'm no expert... Okay, it's time to leave Mr. Toad alone.

The day progressed without any other photo-worthy moments. We went down to the old house to pack boxes of what can be salvaged, but came back empty-handed in the end. Starting in the kitchen, I tried to empty the cabinets... My cookie sheets: Covered in mold. Baking pans: Mold. Oven mitts, towels, ice cube trays, etc.: Mold, mold, and mold. I'm starting to think anything left behind is a total loss. It puts Rip and I both in a sour mood and makes rummaging through the remains a depressing task. 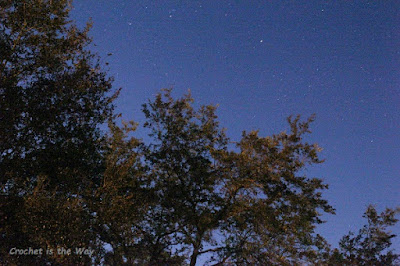 The sun set an hour earlier today, revealing a beautiful moon that's just one day past full... You can bet I was back outside with the camera for those night shots I've been working on. Again I had trouble capturing the perfect picture of what I'm envisioning, so I abandoned my attempts at getting the moon in the photo. Except for that issue, I think I'm getting familiar enough with the settings and I'm ready to try a scene other than Dad's trees. 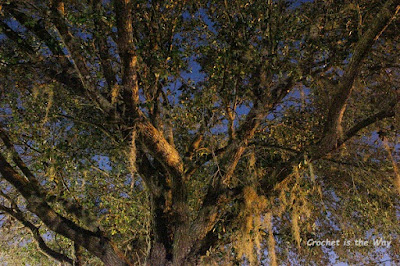 Still, I love these shots for what they are... It might not be much of a scene to look at in a glance, but it's the feeling you get if your brain catches what's "wrong" with the pictures. I like things that have a creepy/beautiful style more than something that's just "pretty".

Perhaps this photography will lead me in another direction after all... But that doesn't mean it will take me away from crocheting! I'm hoping my newfound hobby helps to feed my creativity; maybe it will just fuel my uncertainty in the end. All I know now is that I have a choice between going back out with the camera or weaving in loose ends on all those hats I've been making. For once, I'm actually looking forward to picking up the yarn needle.


Happy Crocheting!
PS - Although the pattern is still lost and may never be found, I finally finished that scarf.
😁
- November 06, 2017 No comments: