Well, I can't believe it... We were able to make it to our house today to check things out, and we actually still have a house! I was fully prepared for Hurricane Irma to destroy our mobile home that is older than I am, but it still stands with roof, windows, and walls intact. It may not be a pretty sight, but it's a good sight to see. 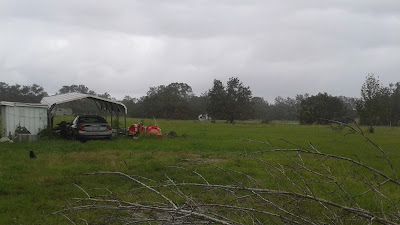 On the trip down and back, we saw lots of damage to homes and businesses. Signs are blown across the highway, roofs are peeled back like sardine can lids, I saw a semi trailer overturned, and the local bowling alley burned down. Our home surely could have faired worse, and we are so thankful that it still stands. 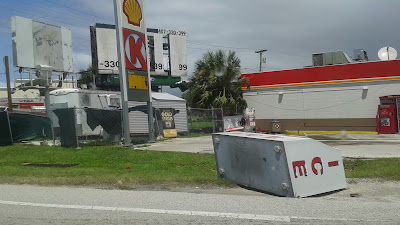 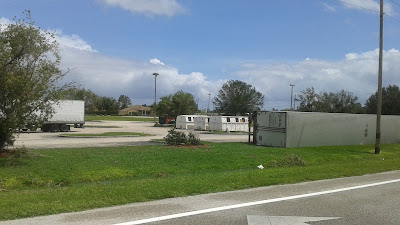 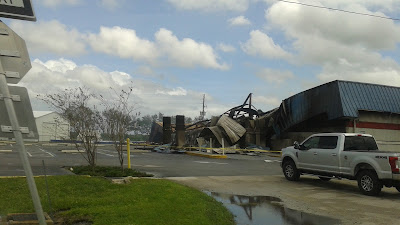 Our carport obtained some minor damage, and we're missing (and I mean completely missing) a shed. It's just... Gone! All the stuff that was in it still sits in the spot where it stood. There's a travel trailer out back that was obliterated, but we're just glad that our house didn't suffer the same fate.

Now, the cleanup begins as we wait to have electricity again. I'm glad to be at Dad's with a generator, but we only run it occasionally to save fuel which is still in short supply. I don't have long to be online, so I'll leave you with a short post. If you're interested in seeing any more of the pictures I've captured of the storm or aftermath, you can hop over to my Google plus profile to see my latest posts.

I can't say it enough... We're thankful to still have a home to return to once power is restored. Our hearts and thoughts are with those who can't say the same.

I would like to start by saying we're still thankful for being safe. We continue to appreciate Dad's offer to stay for a while. And we're glad to see the cavalry of electric workers and cleanup crews working to get the area back to normal. Highlands county suffered a 99% power outage, and tonight we're down to 90%.

Eventually, gas stations will have fuel again. At some point, the grocery store will have bread and ice. Possibly, people will pull their heads out of their butts and learn to treat the non-functional traffic signals as a four-way stop... No, maybe not, because the police have now put up stop signs that still go unnoticed by many.

But as for us, going home won't happen after all. Today when I walked in the door, I was met by a horrible stench and a grey film on the floor. Black specks splatter the windows and blinds like mud kicked up from a tire. And then I found the daisy caps that line my ceiling broken on the floor.

The house was damaged more than we thought with the first quick inspection. Spots of the ceiling are stained by water and sagging. Okay, so we need a roof, right? We began moving things away from the water-damaged edges of the floor, and discovered a split in the bathroom wall where it blew in. On the opposite side of the house, the metal of the outer wall is missing almost all its screws; some that remain are twisted in the wall. These are all things that could be repaired, but it will cost more than the house itself is worth.

As for it still standing? Yes, four walls and a roof exist. But we also found that the frame of the house is no longer sitting flat on the supports at one end. Between all that and the mold that already took over every room, living there could be a death sentence.

So, now what to do? I'll be leaving ten years, my buried cat and dog, and a lot of memories behind along with many belongings contaminated with mold. Tomorrow I'm going back for the yarn stored in plastic bins, with hope it's not full of mold as well.

Unless I can figure out how to make this blog pay like a full-time job, you'll be seeing less of me and my crochet. We have no insurance (can't get any on a mobile home older than me) and we never got the land contract we had been promised. It's a total loss.

But hey, phone service came back today! The first thing that came through on Rip van Winkle's phone was a text from the landlord... He wants to know when we'll be paying the rent. For the first time ever, I don't really give a damn.

We'll make it through this somehow, I just haven't figured out how yet. But we can still be thankful that we made it through the storm with our lives, if not our material things.

Thanks for being here. I'll be back someday soon enough.
- September 11, 2017 No comments: