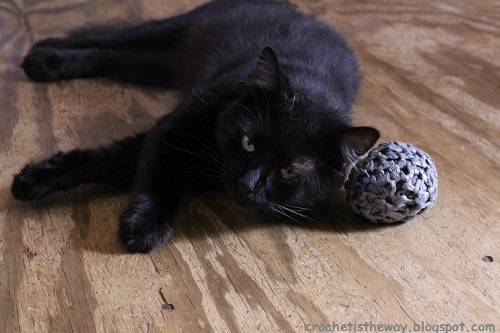 When I was left with extra material after a pattern gone wrong, I re-purposed the plarn (plastic yarn) into a small ball filled with plastic bag scraps. It was an experiment for another idea of mine... I want to crochet a floor pouf or maybe a whole "bean bag" chair entirely of plarn, even using the scrap material for stuffing. 100% plastic. Before starting a large project, I wanted to know how well the all-plastic stuffing would hold up to use. I planned to use this mini-experimental version as a stress ball for now... 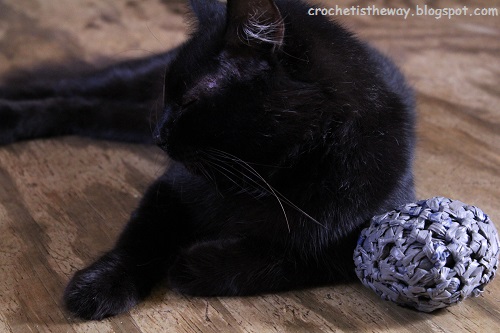 However, it seems to have been re"purr"posed... Jump Steady decided to go outside and prove himself to be a big man-kitty, but got pretty beat up instead. He's been sulking around the house ever since. When he got all excited over the plarn ball, I decided to let him play with it... 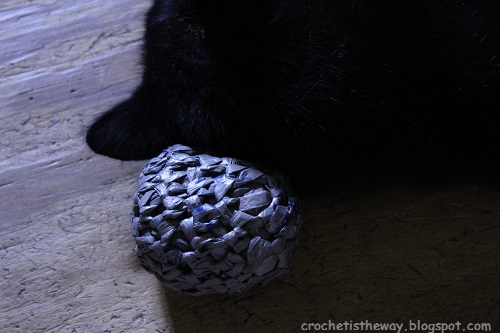 And as usual, not much "play" happened. But Jump Steady did offer to give me his opinion about the project, so I'll step back and let him take over from here. (Don't worry; he speaks normal English, not cat-gibberish, but he does get a bit sidetracked at times...)

Jump Steady - What do you want to tell everybody about the project you stole? 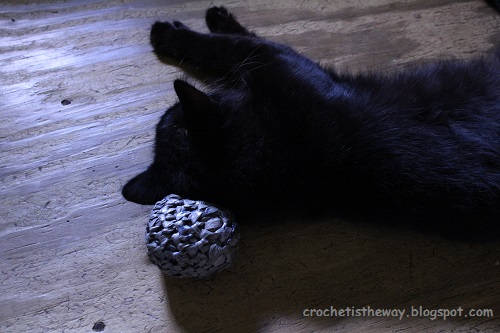 Human Slave kept making crinkly noises with this thing she made for me, but wouldn't let me have it at first. It took a lot of begging, but she finally let it go. Ha - Look, I can put my foot on it! Okay, that's enough of that. Time for a nap... 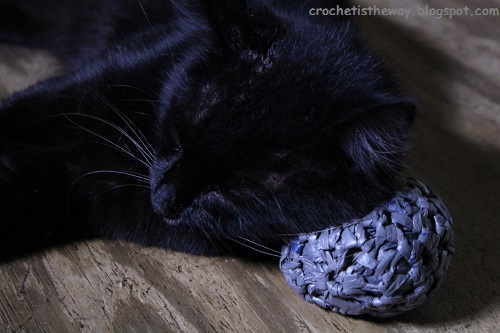 Ooo, this thing is soft and squishy. Purr-fect for a pillow! It was so nice of Human Slave to make this for me... Maybe I'll leave her an extra hairball to play with. Don't know why she's always wrapping them up and putting them in a bag - Maybe she has a collection of them somewhere? Humans are weird. 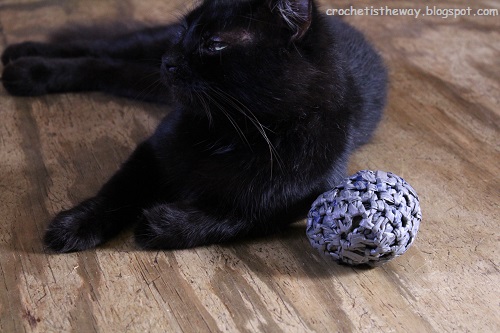 This is really nice to have after getting my head thumped. It was really mean of that other boy-kitty to beat me up after I picked a fight with him, but I'm glad to have the extra attention. Speaking of that: Hey... Hello?... HEY!!! My pillow fell flat. Anybody wanna fluff it back up for me? 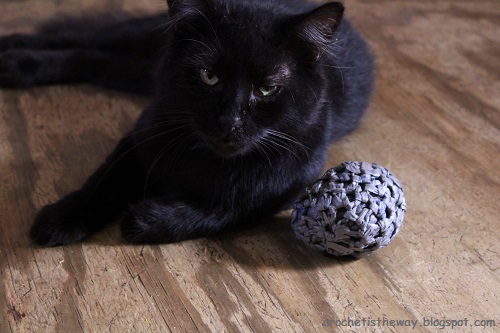 You! Yes, you - Human Slave with the camera. Want to put that thing down and help me out here? I mean, if you have that thing out, then it means you're going to be sitting in front of the other glowing rectangle for a while, making all those click-y noises that disturb my sleep. The least you could do is help me get more comfortable before you start all that racket... 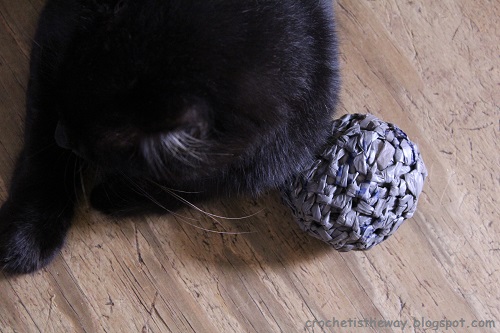 Thanks, that's much better. Now I'll start working on that hairball as a reward for your good behavior.

And thanks for your help, Jump Steady! Now I know the plastic should be stuffed a bit more so it will keep some of its shape. I wanted it to be nice and squishy, but too little stuffing will just leave me sitting on the floor in a plastic cocoon. It might be hard to find a medium between "comfortable" and "durable". That's making me doubt whether I want to attempt the project at all... What if it turns out to be a disaster? This is going to be a lot of work, but maybe it won't be wasted time if it doesn't work out. After all, it looks like I can always turn a mistake into a cat bed.