The Flip that Flopped 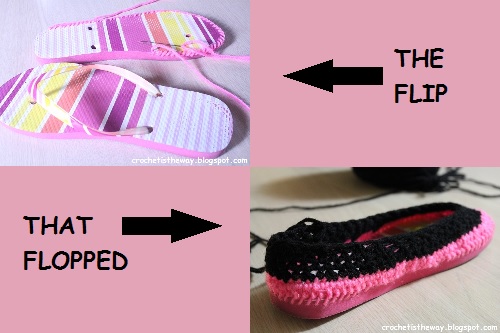 I don't like to be the first person to try something new unless it's an idea of my own. So I've sat back for a while, watching other crocheters recycle or up-cycle their sandals into amazing crocheted shoes or slippers. I've read about how "easy" it is to recycle a broken pair of flip-flops... How "simple" it is to create a comfy pair of shoes... How "fast" you can turn those worn-out sandals into some stylish flats... And this isn't a tutorial claiming any of the same. This is the story of why I won't be continuing the project. 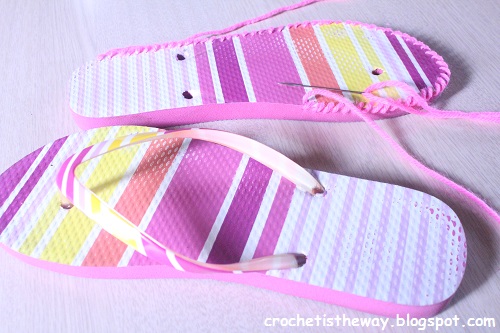 Instead of using a nice pair of sandals for the first try, the project started with an old gunky pair of flip flops that are near (?) the end of their life. Knowing I wouldn't be able to use a tiny hook to work through the foam material, I decided to sew through it in one shot, then work with a bigger hook through the sewn-on loops. 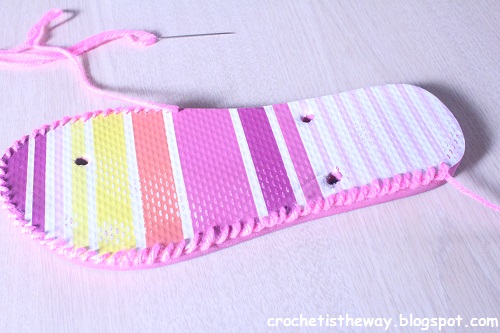 We can use the time-stamps on the photos to track how long this takes... Start time at the photo above is 3:42. Prior to that, it had only taken seconds to cut the straps from the soles. It might have taken about twenty minutes to sew that far around the shoe, but it felt more like an hour. 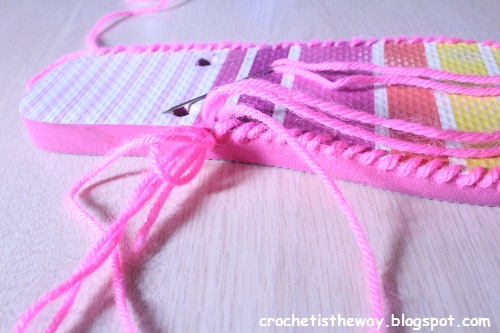 Time stamp: 3:51. It took me almost ten minutes to sew around the inside arch of the shoe. And it felt like another hour of untangling the yarn that bunched up around the sole as I pulled it through. 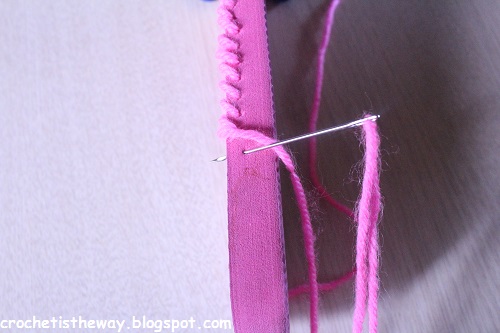 Okay, so the time says 3:56. (It still felt like an hour of agonizing torture while I untangled the knot.) Needle back in hand, my hopes were raised as I reached the end of the sewing... 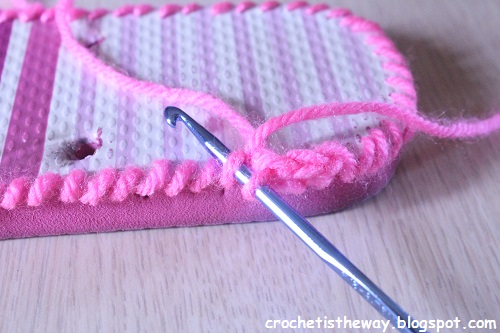 4:13 and my energy levels once again soared as I picked up the hook to start stitching. I was hoping to use a bigger hook to avoid stressing my hands, but found I could only fit a size F (3.75 mm) hook under the loops I had sewn. Hmm... Well, I could tough it out for this little tiny project, right? 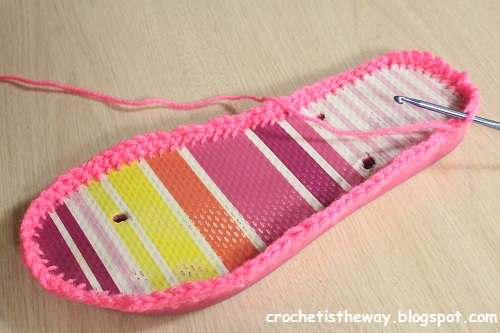 Yeah, right... 9:21, after taking a break, of course... I've only made it once around the shoe. Using the smaller hook was frustrating enough, and the sole kept flopping around in the way as I stitched. I was getting bored; my hands were becoming stiff. But still, I tried to stick with it. I was even working over the tail as I went to save myself work in the end: 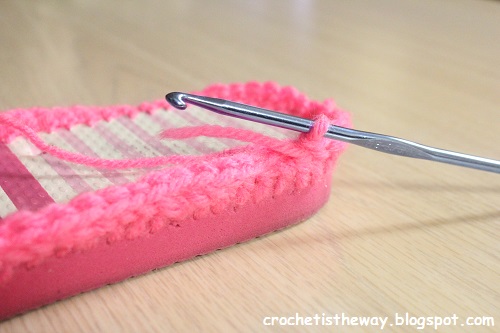 And knowing that this was just one practice project on a junk pair of shoes, the pattern-writing junkie in me still had to take notes. It wasn't a bad idea anyway, considering I'd still have to work the next shoe... 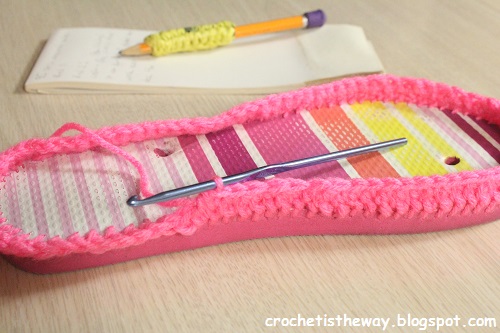 I worked even for the first round, and started making some decreases around the arch in the next round. Even though I wasn't planning on publishing a pattern for the shoes, I still wanted to keep track of where the decreases were to make the second shoe match. After those two rounds, it looked like a good time to start decreasing around the toe. 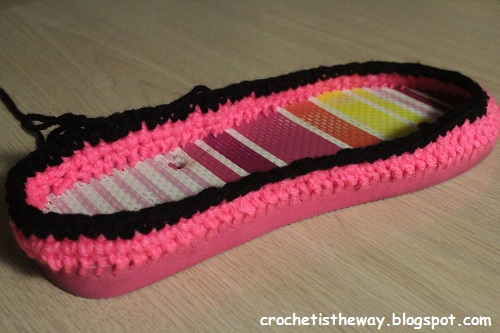 10:46... To fight the boredom I was already experiencing, I had switched colors after two rounds. I was thinking it would be cute to finish the rest of the shoe all in black, then make a pink bow to attach to the toe. I was trying to decide whether I wanted to make a plain pair of flats, or something decorative with some style. My hands were cramping, and I had no strength left. I put the project up for the rest of the night, then asked The Kid for her opinion the next day. 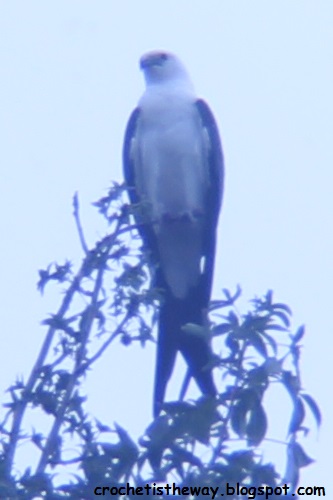 2:27.. The next day resulted in no crocheting. Too sore to continue working on the shoes, I spent the day doing housework and hanging out with The Kid (when she wasn't hiding in her room). We ended up outside and I heard an awful squawking going on in the backyard... A look revealed three swallow-tail kites causing the ruckus in my trees that overlook the neighbor's chicken coop. (Yikes!) I grabbed the camera only to discover I had a dirty, hazed-up lens, and missed the opportunity at some awesome shots of the birds. 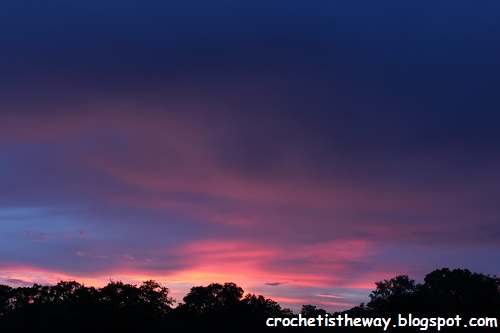 6:52 and a clean lens... I think the time on my camera is off, because it's closer to 8 p.m. Another beautiful Florida sunset right in my backyard, and not one stitch made all day. As far as that opinion from The Kid went, she didn't really give me much of an answer other than "I think those are the kind of shoes you only wear around the house". Well, fine... If she doesn't like them, then I can always use them for trips out to the shed. 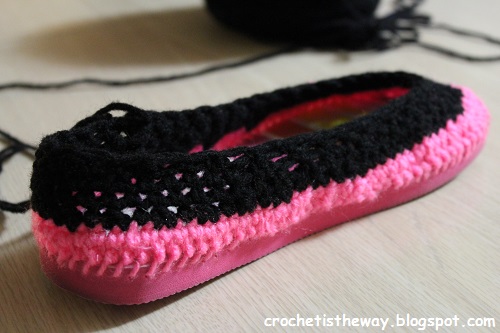 ...Days later... This is as far as I've gotten on the first shoe. My hands hurt more with each round, and the shoes... No, just one shoe... It looks uglier to me every time I look at it. I hate pink. I hate bows. Heck, I hate shoes! (Unless they're boots...) I hate how this stupid shoe keeps flopping in the way as I work. Most of all, I hate how my hands hurt. Maybe this is a quick and easy project for other crocheters, but not for one who's hands are affected by rheumatoid arthritis (or any other disability). I'm hanging up the hook on this one and frogging the yarn I've worked up. I can create other amazing, beautiful patterns, and I think this blog proves it. But this project? This is just a flip that ended in a major flop.