This post might not be about crochet itself, but I know there's many crocheters out there that fight the same fight as me... We just seem to hoard crochet projects and yarn, and sometimes(?) it starts getting messy. Long-time followers, you know I've battled to empty my couch of all WIP's for a while. I took a few computer-free days this week, and it got me motivated to work on cleaning it off some more. And finally - Finally - You can see more than a corner of my couch! 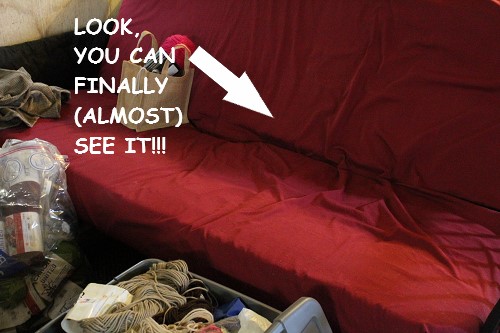 Rip van Winkle picked up some storage bins for his stuff, and ended up with an extra one he didn't need. With the pile already being a mess on the couch, I figured it would be better off as a mess in a box. But as I started cleaning, I found things (garbage, really) that had been buried under everything else. Yarn labels, discarded tails, and scraps of fabric that weren't suitable for making into yarn. So I've discovered that I'm being messier than I thought! 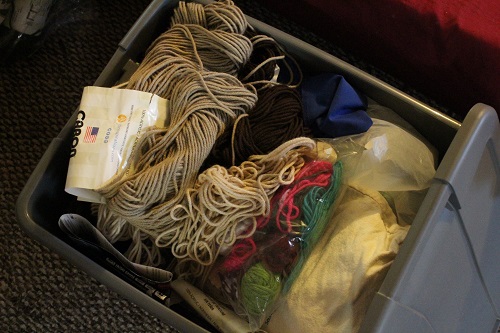 With the rubbish thrown out, I started to organize yarn scraps into bags. Seeing that it would take a long time, I decided to stop organizing and put the rest in the bin as the mess that it was. Some was already bagged up, and I found room for it back in the bin from which it came. It went along with the other bin to the corner I'm trying to turn into my office... Well, at least you can see my couch now: 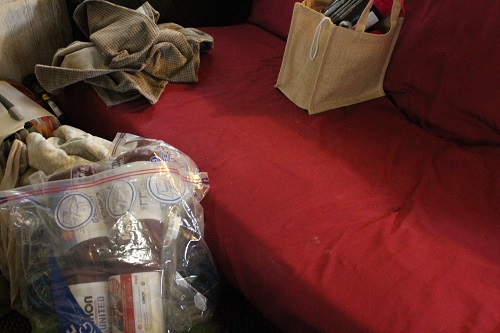 As for the office, it's not what I really wanted. When work started spilling all over the house, I knew I had to get organized before it was too late. I had plans for the perfect desk and work-space, but something gets in the way every time I get close to achieving it. The car, the air conditioner, the disaster of trying to sell Rip's truck... And how much else? The more my office was put off, the more my house looked like it was already too late to fight the mess. But at least now you can finally see the couch: 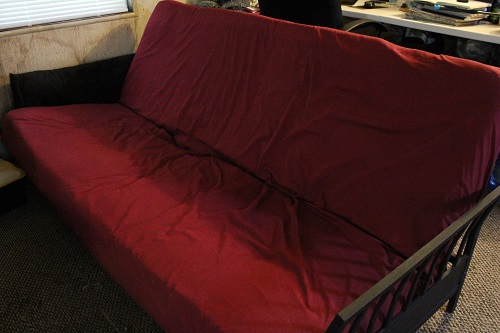 Yay, kinda... It's not much of a couch to look at; a futon, really... But you can see it, so: Yay! The office is even less to look at, with storage bins crammed underneath a folding table and a mess of my notebooks still to find a home on top. But, it is my office. It's better than WIP's on the couch and dinner table, and it beats sitting in front of a file cabinet with no leg space. 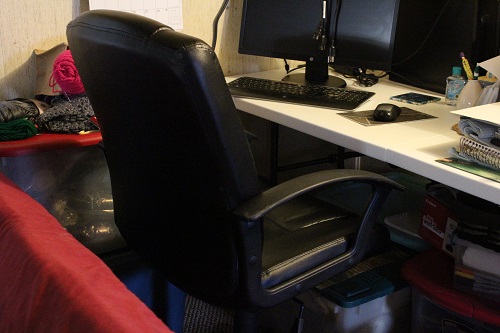 With most things stashed away in bins, I hope to be able to concentrate more on one thing at a time. I used to be really organized, and I don't know how this has happened to my house. The more I set my mind to that "one thing at a time" plan, I find myself completing projects faster... And I know that might seem like "well duh, of course you finish things when you keep working on them", right? If only the crafty side of my brain would see it as common sense, I wouldn't be in this position in the first place. 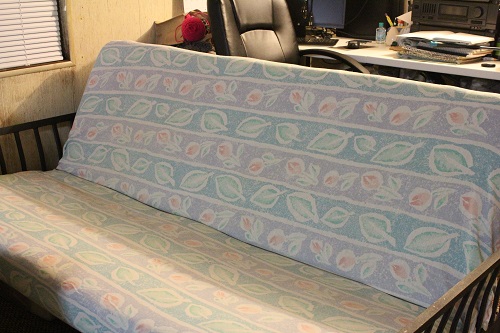 I'm as disgusted with the fresh sheet on the couch as I am by my recent lack of organization... I absolutely hate the pattern of that set, but it's the only spare I have left. The rest were showing wear, so they got cut up for a fabric yarn project that's being neglected in a bin. And now I've discovered a rip in this one, so I guess I've been letting a lot of things go around here. Fresh sheets and a fresh start: Please do not ever let me get back to this place again! 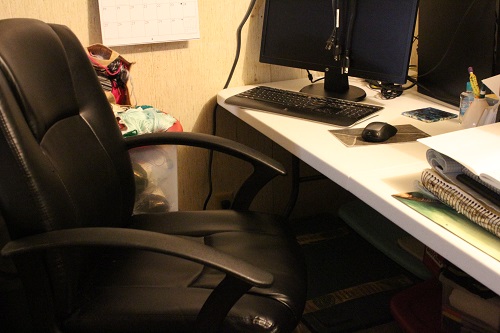 There's work left to go in the "office" but I suppose it's usable as-is... After all, I'm sitting here writing this post, with my feet propped up on one of my storage bins. (They make a pretty nice footrest, actually!) There's that little pile of WIP's on top of the bins behind my chair, but they're being left out because I plan to finish them soon. And if I don't get to them in a week or two, I think I'll stash those, too. Sometimes we make cutesy jokes about having an addiction to crochet and too many WIP's, but I'm over thinking this is funny. I need my organization back!