Hey, Mother Nature! Are you feeling alright? Because the last time I checked, I live in Florida. And there was a bunch of beautiful flowers in my yard that say it's springtime. Last weekend was lovely. I was walking around in shorts and a tank top. But now I'm thinking you're off your game. I wore a jacket and a scarf yesterday. This morning, I had to pry the pans off the ground to feed the outside cats. You already got those pretty flowers. And today, Mother Nature, I'm not happy that you're trying to freeze my husband.

I made Rip van Winkle a ninja mask (balaclava) to help him fight the freeze. Today... Wait, I haven't been to bed yet, so today-to-me is yesterday in real-time... Anyway, when he came home from work, he told me he had an early morning the next day (which is actually today). Knowing it was already cold and going to get worse, I pulled out a skein of yarn and grabbed a hook. 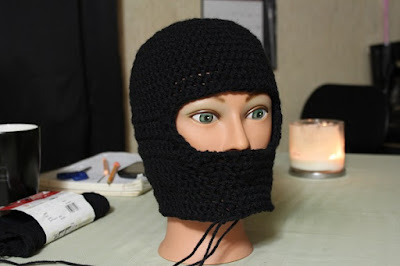 It was 9 p.m. and 46° when I started. I didn't have long to finish. I worked in rounds of half-double crochet as for a hat until it reached eyebrow length. Then I broke the rounds and worked in rows, adding a 2-stitch increase every two rows (one stitch at each end). At 10:30 and 43°, the piece narrowed in just under the nose, so I made a chain across and worked a round again.

I didn't like how that looked, so I ripped it back. Before chaining across, I worked down the post spaces of the rows, making a decrease between the side posts and the stitches across (which would be the skipped stitches of the hat piece). Worked even across; another decrease between the last stitch and the first side post of the opposite side. Worked even up the side, chained across, and joined. 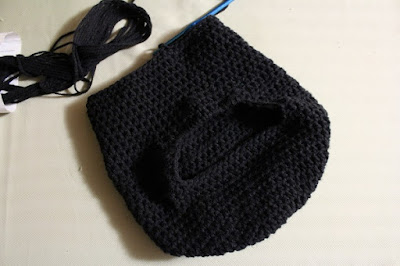 You can see in the picture above that the piece will pucker when flat. I worked most of the stitches of the next round even, but made a 3-stitch decrease in the middle of the stitches in the chain space. This created a little shaping that will allow Rip to pull the mask over his nose while he's out in the elements on the job. (It doesn't fit well on Head, because she doesn't have average human proportions, plus her female features don't work well for modeling a pattern that fits a man.) 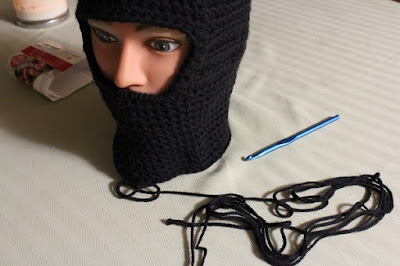 At 12 a.m. and 39°, I spread a few more decreases across the back side around the neck This tightened it up just a bit to help it stay over the nose, and gives a little comfort room when down over the mouth. It was just two decreases the next round, each even with the opening of the face-hole. The following round, I made each decrease to the outside of the previous round's decreases.

And that was it. Any tighter and he wouldn't be able to pull it over his head... I wish I had time to work it in the super-stretchy double crochet cross-stitch! I worked even until I ran out of yarn, which left the mask covering his neck just to the collar line. I cut the yarn at 12:30 and in under a minute had the tail woven in. I took a little time to take the rest of the pictures in this post. 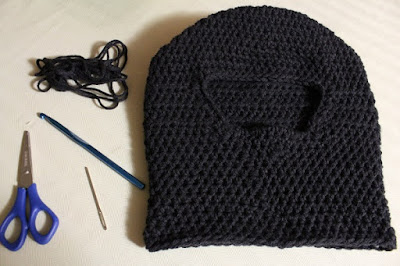 At 12:45 and 38°, I filled his thermos with hot water to pre-heat it. (Tip alert, btw! I'm surprised how many people don't know you're supposed to do that.) I turned on the coffee maker and went back to dig out the first mask he requested me to make so I could compare them... The one I listened to his opinion about how to make: 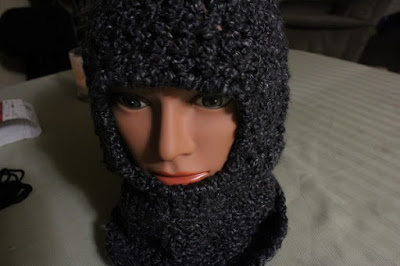 Wait, before you think it's not that bad; I really worked it into place to get it to it look nicer for that photo. Anyway: He saw the yarn; he asked for me to make it. He sat through the process of creation, telling me he thought it should be this way or that... Many times I told him why it probably should be another way. No matter how many times I tried to explain that "how it looks right now isn't how it will be", he couldn't understand the concept of shaping. Let me put it back on the model without working it around, so you can see what it looks like when Rip wears it: 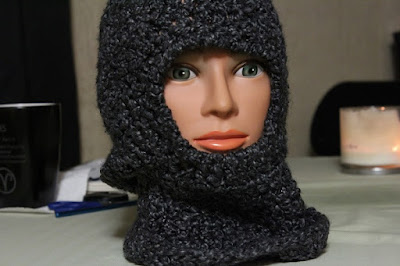 He kept telling me to make it longer. I told him "for it to be that long, I'll have to flare it out to fit around your shoulders". He didn't want that; it would look like a bib. He wanted to be able to tuck it under his shirt. (Ahem... See previous explanation?) Nope, he wanted it to stay narrow and tuck in. Which is why it fits all bunched up like in the picture above. As a result, he never wears it.

1 a.m, 37°. His alarm goes off. Repeatedly, for ten minutes. He never moves. I pour the hot water out of the thermos, dry it and fill it with coffee. I pack his lunch, wishing he would stop eating Doritos every single day before he dies of diabetes. That one's a battle I can't win... But I hope my last-minute project helps him fight the battle of the cold out there tonight. 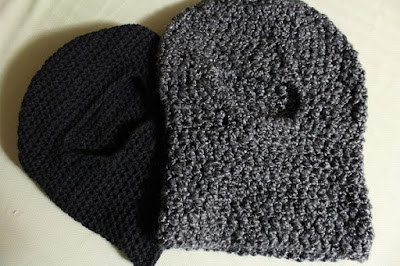 1:30, still 37°. I'm sure it will be freezing before the sun comes up. He stumbles out of bed and I pour him a cup of coffee. As he chugs the brown fuel of the working and gets his things together, I explain that his ninja mask is ready. "Really?" he asks... Yes, really. He tried it on before leaving, and remembered to take it with him. I didn't get a thank-you, but he did say it fits good. I can't expect much when he has to be out the door before 2 a.m.

6:30, 34° according to the thermometer. Ice on the ground, wilted flowers everywhere. He had to be on the job by 3 a.m., so he's been out there for a while now. I hope the mask is helping him stay warm. It will be another hour before sunup and I bet it will get colder until then.


Well, Mother Nature, I won my race against Father Time. Now Rip has to fight his battle with you and Jack Frost. I gave him a pretty good weapon. I couldn't save my flowers, but your damage will just make them come back stronger. And I've kinda got you beat on that too, because I've already preserved them forever in photos. Now I'll share them here so they can be remembered by all: 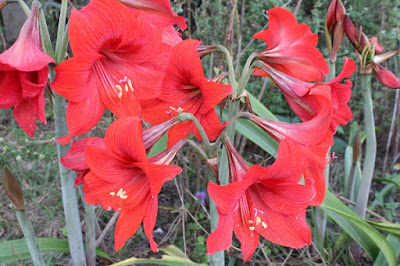 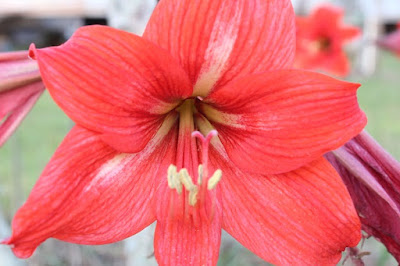 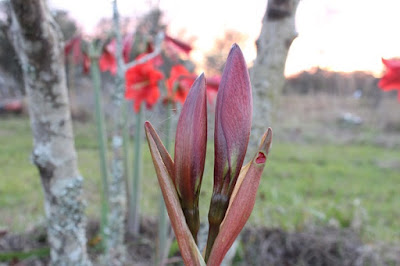