Eye of the Emerald Mini Mandala

These mini mandalas are so quick to work up. They make great matching coasters for the full-size Eye of the Emerald mandala if you plan to use it as a doily -or- If you plan to use it as an art piece, they could make neat accents to display with or attach to it. Instructions are giving for color changes to create both versions shown, or use up some scrap yarn making your own color combinations! 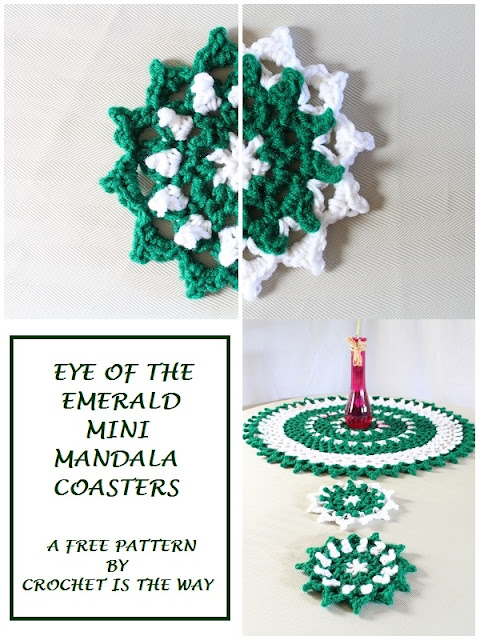 Regardless of your plans for the pattern, this is a smaller, less ruffly version of its bigger sibling. (Smaller and faster with the same great picot texture!) The large mandala gave plenty of room to work out the ruffles caused by increasing, but this time we need it to stay flat for a short six rounds. So if you are here from working the large mandala, then please take note that this pattern is similar but not the same - The stitch counts for chain spaces and groups of stitches are changed. 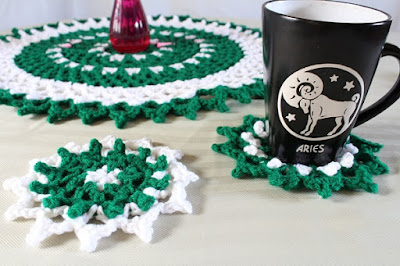 Finished size:
6" (15 cm) in diameter from point to point

*As noted in the pattern for the larger mandala, there is a chance that the white yarn I'm using is really Caron One Pound. (I'm already using the rest on another pattern, and the more I work with it, I think it is.)

Either way, they both work up in the same gauge.

Notes:
Chain stitches at beginning of rounds do not count as stitches.

New colors are joined with standing crochet stitches. If you are unfamiliar with this method, you can join new colors with a slip stitch, chain 1, and make the beginning stitch.

The picot stitch for the final round has been altered to a chain-2 picot. You can work a regular picot if you like, your finished size will be slightly larger.

*Picot (worked slightly different than usual - check out the matching pattern for photo examples) - Chain 3, insert hook in the front loop and bottom bar of last stitch (from left to right); slip stitch. (Read note regarding this stitch before working round 6.)

The pattern looks the same for both versions, but the written instructions change just a bit for different color changes. 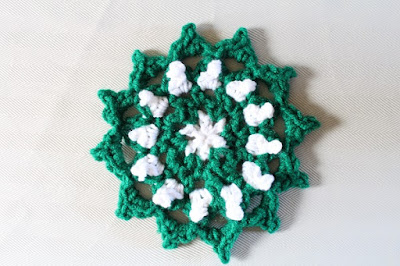 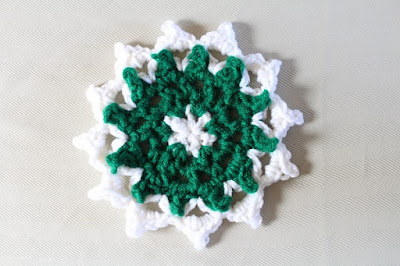 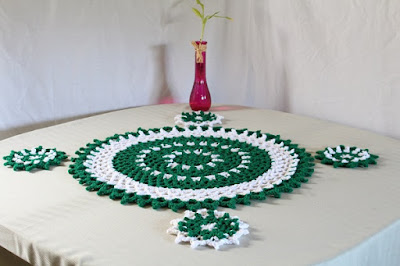 The mandala and minis go well as a table set, but I suppose my table is a bit small for them without the extension installed... And I'm currently enjoying the extra space along with not having to lift that leaf. (Am I getting weak, or do they make those things with a lead core?) I played around with different ways it could be used on a smaller table, but just couldn't make them all fit together. 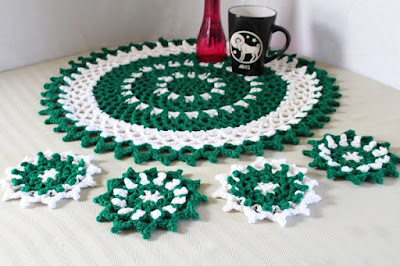 I tried for another hour, rearranging and taking photos until I realized something: I'm Aries and Irish. No wonder I'm so stubborn! (I was doomed from the start.) I still think the whole set would look awesome displayed on the wall as an art piece... But I have to face the facts: It has white in it, which will never stay white in this house. It doesn't fit my table, and the colors don't match my decor. I enjoyed the design, but I think my dad likes it more than I do. He already has the perfect plan of where to use it, too. Well, that was easy! No more rearranging needed.

PS - Check out that picot texture! 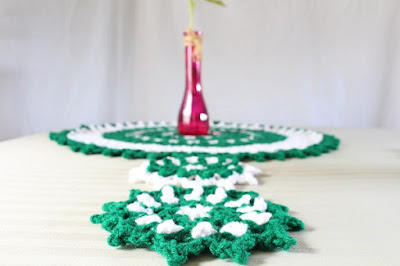