She Made Me Do It

I've been so involved with other projects that I forgot to update you all with the latest yarn purchase... I know, I promised not to buy more. The Kid made me do it; I swear! Some of her friends surprised her with some holiday gifts, so she wanted to get some things to return the favor. She chose to go shopping at the craft store. Then she took a wrong turn and led me right into the yarn section. Next thing I knew, all of this was in the basket: 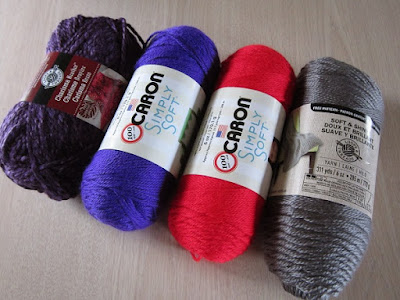 There was more, too. Some of that got used up in an all-night crochet tornado of making gift bags (and a tie) for her friends. I took pictures of the bags, but lost them somewhere in the new computer. And the tie was finished last-minute before she left, so I never got a photo of that it. Each were made with Caron Simply Soft, which happened to be available in all of their favorite colors... Of course, I let her pick out a few skeins in colors she liked, too. She picked out the brightest red and a beautiful purple which unfortunately comes out a bit dull in the pictures: 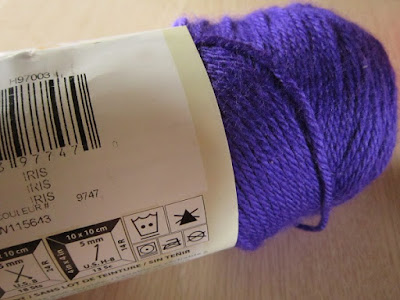 Directly across the aisle from Simply Soft is a wall of Loops & Threads Charisma on sale for $2 a ball! "Ooo! Get it! Get it! Get it!"... That was me speaking, not her. She's obsessed with purple, and they had this awesome heather in an amethyst tone. I knew exactly what it was going to be when I saw it. We (I) bought four balls. 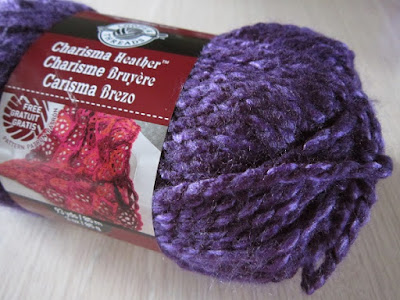 Of all those purchases I can blame solely on The Kid, there was one I made of my own choosing... Though I did make her pick the color. I was a bit scared to try another new yarn from Loops & Threads after my mishaps with Facets, but I do enjoy working with Charisma, so not all of their yarns are bad. (Just that one.) Since this stuff looks to be a cheaper version of Simply Soft, I decided to compare it: 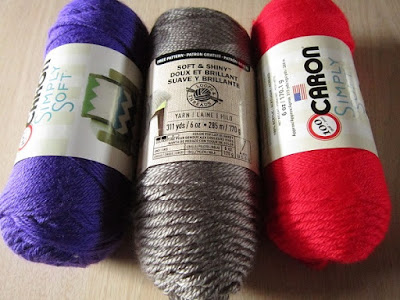 At first comparison, Loops & Threads Soft & Shiny is even more shiny and softer than Caron Simply Soft. I haven't worked with it yet to know if the gauge will match, but Soft & Shiny seems to be a little thicker than Simply Soft. And just like Facets, it appears to be tightly spun when balled up, but as soon as you pull it from the skein, you can see loose fibers. Oops! Well, would you look at that... While trying to pull the tail out to show you, this skein spit out a little yarn vomit. We can't have that mess sitting around now, can we? I'll have to get a hook and start experimenting! 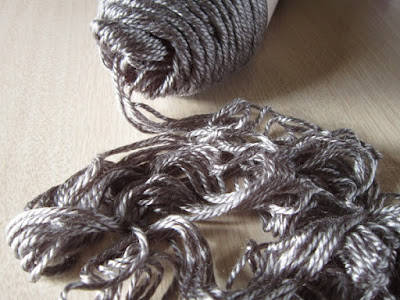 But first... There's this little thing I started that will have to be finished up. Didn't I mention that there was four balls of that Charisma purchased? So, where's the pretty picture of all of them piled up in all their glory? Sorry, all I can give you is this: 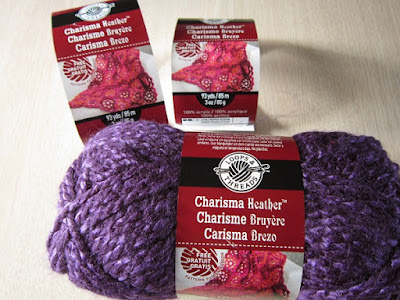 Um... Should I explain that I'm still having trouble with insomnia? Instead of letting it bother me, I've just worked it into my schedule as "free time". Free time to work on whatever I want. The pretty purple fluff called to me from the bag, asking why I left it in there. My latest session of Free Time was dedicated to helping it evolve into the vision I had for it: 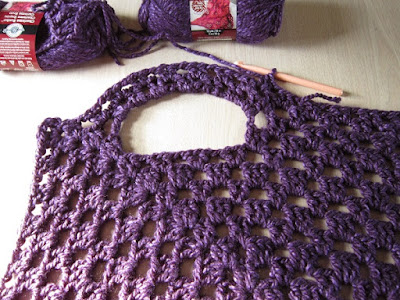 I think I like Free Time! Especially when it involves chunky yarn that works up quickly. And as a purple-lover myself, this one is just a treat to watch grow. I won't be sharing a full photo of the project yet because I want to keep it a bit of a secret from The Kid. All I'll say for now is: Wow, this one is gonna be great.

Well, in that last photo you might notice the sun going down for the day. I guess it's time to go make some food... Rip van Winkle came home hungry. I'd say I can probably have this project finished by tomorrow, but I won't. It's a Free Time project that's not on a program. Maybe I'll get some sleep tonight. Or maybe there will just be more