A Dagger for Courage

In Macbeth, the dagger represents deceit, treachery and greed. A dagger is often used in tattoo art to convey a broken heart or a lost loved one. From ancient Buddhism to modern Wicca, the dagger is for rituals and other ceremonial purposes. This small, easy-to-conceal blade has been used throughout history to symbolize many things, but for the military, it is a symbol of honor. Representing stealth, intelligence, precision and more, the dagger can be found on many military insignia.

One emblem was brought to my attention by Stella of Purfylle, and I've become obsessed with learning about this piece of Australian (and world) history. Z-Special Unit was a joint Allied special forces unit that carried out 81 missions in the South West Pacific during World War II. Their last - Operation Copper - was carried out by a crew of eight commandos... And only one survived.

Sapper Mick Dennis fought through Japanese patrols, swam over three kilometers under pursuit, and after nine days finally met up with Australian troops to pass on information that was critical to the war. It's a story of bravery that makes you wonder: Where's the movie? Well, I can't make the movie it deserves, but I can crochet. So for Sapper Mick Dennis and the heroic Z-Special Commandos: A Dagger, for Courage. 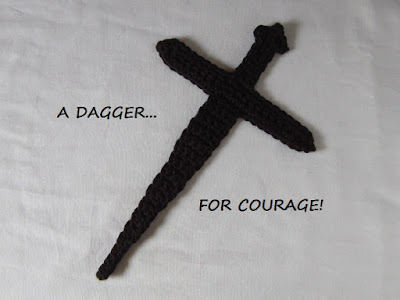 This is no small applique! I couldn't make a tiny piece to commemorate the courageous acts of the Z-Special Unit. This dagger measures 12" (30 cm) from hilt to tip of blade. Easy instructions are given to make a narrower hilt. 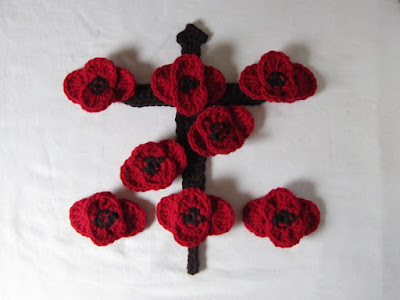 Materials:
Worsted weight (4) yarn
-I used some leftover Caron One pound, only in Black. The hilt and blade are made separately, so you can easily make them in two colors. A few yards are needed for both pieces.
Crochet hook size H/8 - 5.50 MM
(Size H in honor of the HDML 1321!)
Yarn needle 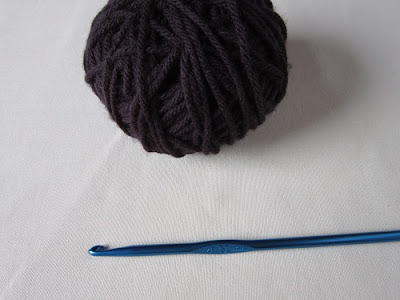 Gauge:
Not important
-Measuring across the hilt, I have 6 single crochet in 2" (5 cm). 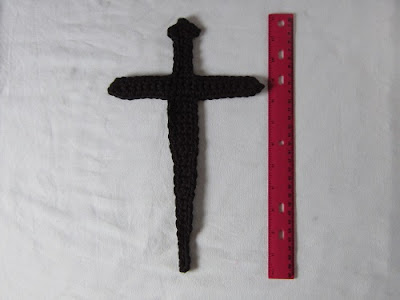 Chain-1 at beginning of row counts as a single crochet unless stated.

Single numbers in bold parenthesis (1-4) correspond with photos for help. They are not a stitch count or any part of the pattern. 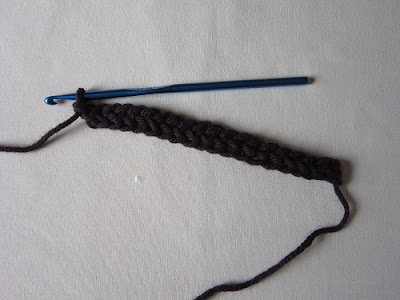 *Some daggers don't have a wide hilt! For a narrower hilt, you could make fewer stitches here. 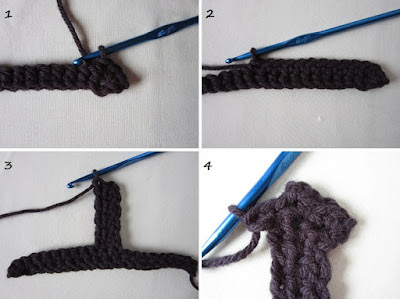 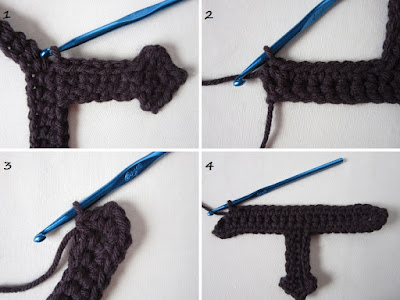 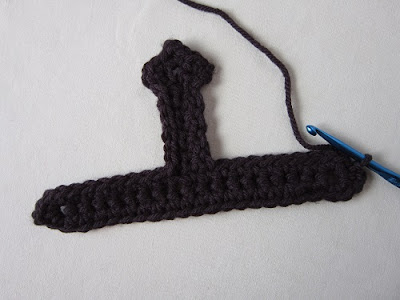 Find the placement of the blade by the stitches that line up with the hilt. Beginning one stitch to the right of the hilt, join yarn with a slip stitch. Chain 1. 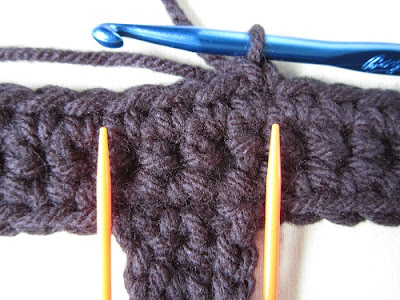 Work single crochet stitches to width of blade (I made 5). 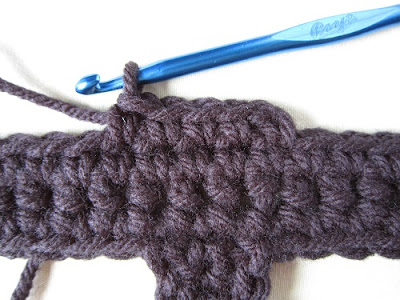 (Chain 1, turn, work 1 single crochet in each stitch) for each row until you want the blade to reduce (1). (I worked 6 rows) Chain 1, turn, single crochet 2 together. Continue working even for the same number of rows, and reduce again (2). And repeat (3) until there are only two stitches left in a row. Work for the same number of rows. To finish, chain 2, turn, and slip stitch in the last stitch (4). Bind off and weave in ends. 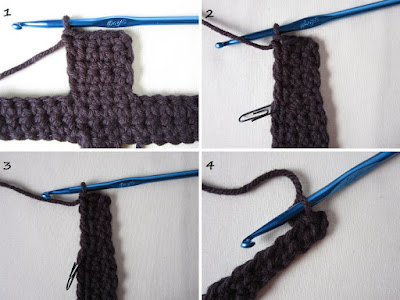 *Some twisting at the tip of the blade was a problem for me until I dampened and blocked the piece. If you will be sewing it to something, this won't be needed. 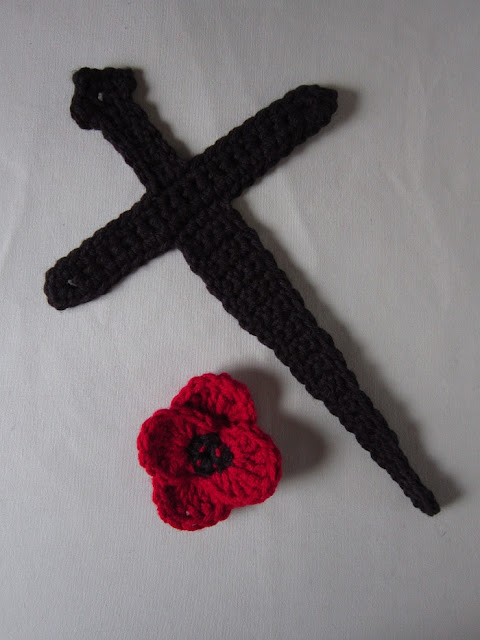 I have to say that the lack of a movie about Operation Copper doesn't bother me; I don't watch them anyways. However, there is a book that I can't wait to read. Although I really wanted to be old-fashioned (nerdy) and hold a paper copy of Guns of Muschu, I decided to make the less-expensive purchase of an e-book so I could put my money to better use... The patrol boat that was used in Operation Copper has been sailing the seas all these years, but now she needs our help! After efforts to restore the HDML 1321 to her original condition, the ship sank at her moorings on October 19, 2016.

I first learned of the HDML's plight through the Purfylle blog. Through a roller coaster ride of uncertainty, Stella has kept me updated on the situation. At first it looked like harbor authorities weren't aware of who the "MV Rushcutter" really was, and the historical HDML 1321 was destined to be scrapped. But now, there is hope! As I write this post, efforts are being made to raise the vessel from the harbor floor. Plans are in place to restore her to wartime condition and make her museum-worthy, but the ship's owners now face bankruptcy. It is a saddening tale as it is, but reading about Ms. Geddes' loss of hope is heartbreaking.

Seven men lost their lives on that mission. The chance to preserve their memory is fading away, but it hasn't disappeared yet. I know many of you, like me, don't have much to spare. But all it takes is the cost of your next 400-calorie pumpkin spice latte; that skein of yarn you don't really need because you already have a giant stash; that extra $10 that could have went into your new-boot fund... Please, just one time, instead of spending that cash on something that will disappear soon in the future, put it towards part of saving the past. 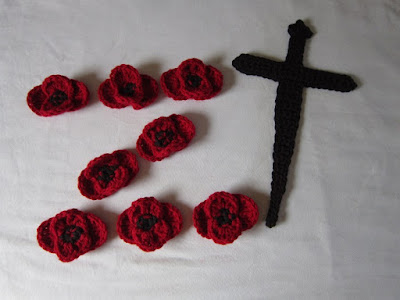