Recently I heard the term "artsy-fartsy" used... About me. Um... Is that supposed to be a compliment or an insult? I'm not saying that I was insulted, but I'm wondering if I should be. After all, the phrase has the word "fart" in it, and that makes me think maybe people that use it think crafters just "fart" around at what they do... Or the person who used the term thinks my work stinks!

Anyways, I'll get past the toilet humor and back to overthinking everything... I'm working on a tutorial/pattern. Trying to work on it, but not getting very far with little sleep (still up at 4am), and still thinking about this phrase. I decided that even if it was meant as an insult, I'm taking it as a compliment. As I'm editing through what seems like thousands of photos, I came across the perfect examples of what "artsy-fartsy" means to me:

1. You pay attention to detail. 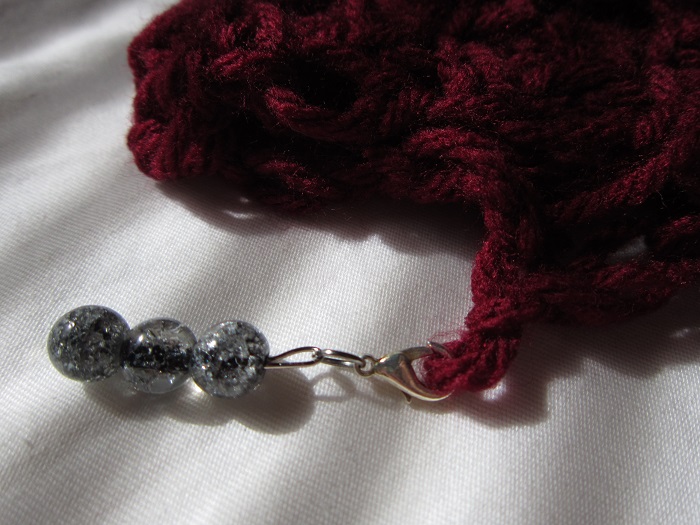 Whether that is something you put into your work or just a detail you see in something, you're more likely to see what "glitters". And if it doesn't glitter, then you'll make it glitter if you want it to.

Okay, so maybe crafters do "fart" around a bit sometimes! The only reason I had for taking that photo was because I liked the way the light was shining through the cracked glass beads, and the burgundy yarn offered some beautiful contrasts of light and shadows. It was a time waster, but looking at it made me happy. And that's all that matters!


2. You know how to improvise. 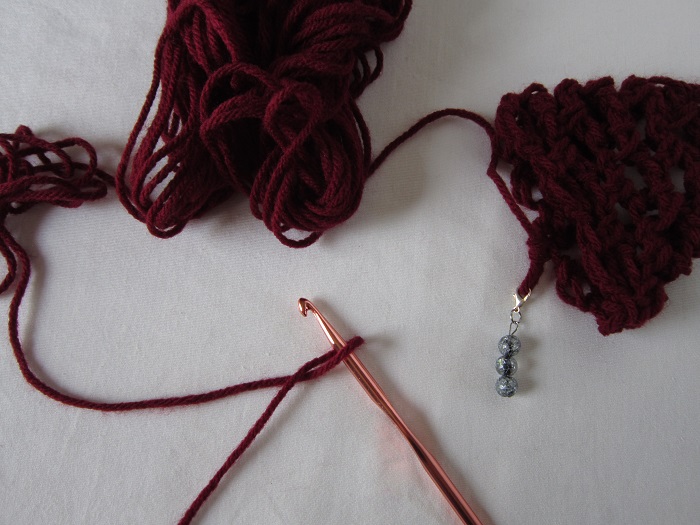 So you ran out of material? Or you didn't have what you needed to begin with? You'll find a way to make it, stretch it, fudge it, think it out, or frog it back.

Working on a scrap-busting project, I wasn't sure how far I could work with the yarn I had left. I dropped the work from the center-pull side of this skein, and began working the second piece from the outer end of the yarn. Knowing I'd need a locking marker to keep my active stitch on the first piece from pulling out, I whipped up a stitch marker with some beads and jewelry-making supplies. 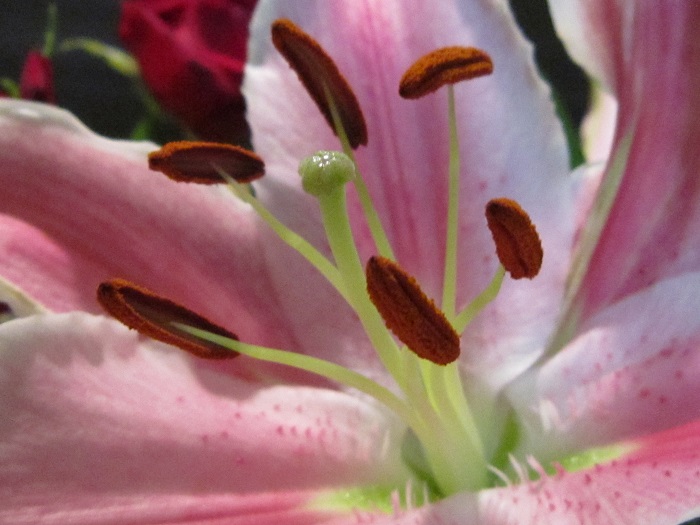 You know what goes into things that have been "made". Maybe it's the blood, sweat, and tears that went into a family heirloom, or perhaps it's just how long it takes for nature to turn a seed into a bloom. You know that making things takes time. And you appreciate the time that's been put into them, whether it was made by you, something you can't really see, or someone you never knew.

I didn't take a walk in the garden for that lovely photo; it's from an arrangement that Rip van Winkle bought. I can't help but take pictures of cut flowers when I receive them, because I know they won't last long. Maybe I'm horribly sentimental, but I always get a little sad when flowers die. I'd rather have a living plant, so I can see the creation of blooms happening again and again. 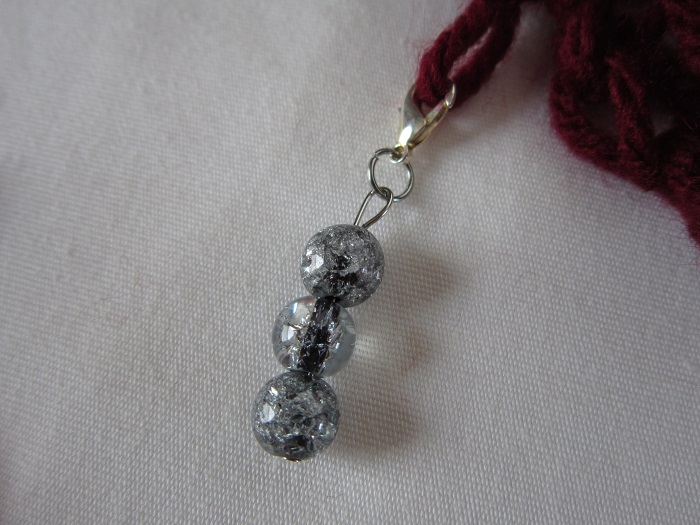 You might not have made or done that before, but you'll find a way! If you can't figure out how on your own, then you'll go searching online tutorials and Pinterest boards until you find the perfect instructions or inspiration.

I knew I wanted to make a cute dangling stitch marker, and I had the perfect beads in mind (as well as on hand). Why cute and sparkly? Because I had an idea for a traveling stitch marker that I could clip on a chain or bracelet like a charm when not in use. (I lose my paperclips and scrap yarn pieces in bags.) But... How to make it? I remembered a tutorial from EyeLoveKnots for reversible earrings, and thought the earring charm was close to the idea I had. While I was there, I searched out another tutorial for how to make dangle earrings, and combined the methods from both to create my charm-marker. 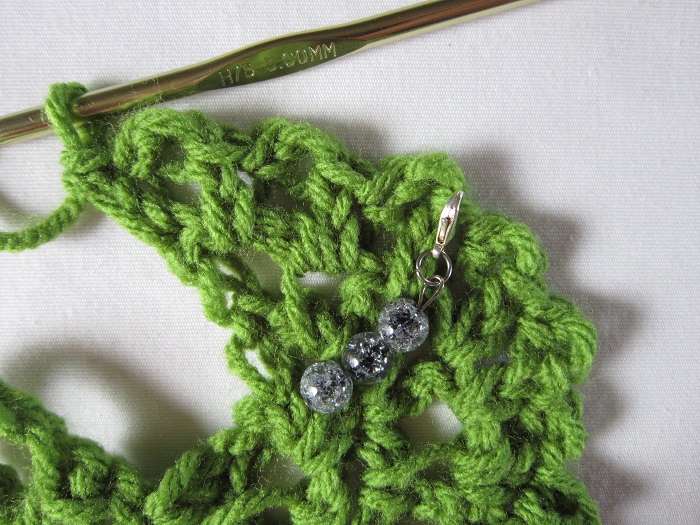 You had that one big, awesome idea that would be... Well, awesome. If only worked! Perhaps you'll rethink it, try again, and succeed. Or maybe you don't come to that conclusion until many failed attempts and f-words... You can accept it when you know something you tried will never work, and you know not to go that direction again. You can take a failed attempt at creation as a learning experience and just walk away.

I tried to adapt a thumb-less pattern into a design with thumbs... And failed. The symmetrical fingerless pattern was easy to change one way to create a thumb hole. However, no matter how many times I tried to work out a thumb on the other glove, I couldn't work it into the design. It would be so much easier to break the yarn and join again to make thumbs. Why am I bothering to fight with this? Oh well, lesson learned. At least I got to see how pretty my new sparkly stitch marker looks on that bright green yarn!

In my overthinking process, I came to the conclusion that being called "artsy-fartsy" isn't so bad. The term used to conjure up images of socialites standing around an art museum while sniffing wine, or half-naked hippies dancing with streamers. Of course, if you happen to be one of those people: 1) I'm half joking and mean no offense by calling you out; and 2) You're artsy fartsy, too!

It's just a phrase that means you enjoy doing something that someone else doesn't understand. Whatever that thing is, you see the beauty in it; the fun in it; a purpose in it. "Artsy-fartsy" might not be a pretty way to describe doing what you love, but there's elegance behind the process of making and doing. I won't be offended by the term. Whether you're a passionate poet, crazy crocheter, or race-fan redneck, I bet there's creation behind that one thing that you love most. We are the ones who celebrate creation and make it happen. Be proud to be artsy-fartsy.