Spiraling out of Control

Starting work on my coffee-themed afghan, a song began to play in my head... "One of these things is not like the others, one of these things just doesn't belong." (Yes, I was a Sesame Street kid, and I still have nightmares about Big Bird.) Okay, why is a song from a popular children's TV show on repeat in my brain while I crochet? No, I haven't gone bonkers... I think. 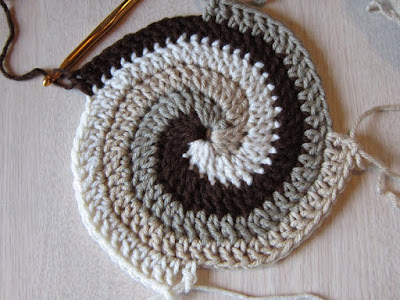 In case there's any of you with the same color range as The Chronic Napper, I'll stop with the guessing game. Taupe. Oh, Taupe, what color are you? In the store, it was tan-brown. At home, it was grayish-brown. And then in pictures, it took on a greenish-brown hue. When I saw it at Dad's house, it was totally green. Now, green is all I can see when I look at it: 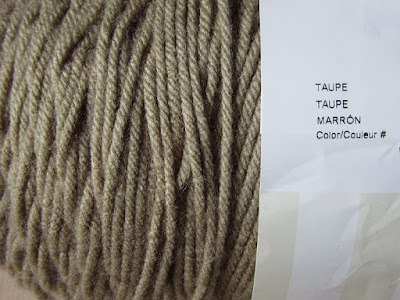 The simple answer for me to move on with this project is: Discard the Taupe. It's not worth this guessing game. But then, doesn't it look brownish again? Maybe it only took on that green tone because of the colors surrounding it. I wasted time not making a decision took some pictures so I could ask opinions before completely condemning the Taupe. 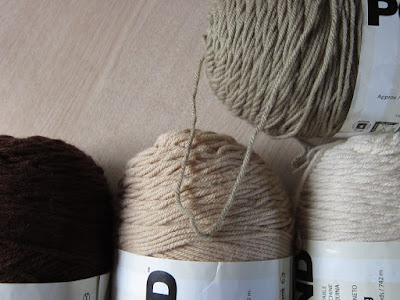 I thought of stretching my design idea a bit, and calling that green-y color Green Tea. Hey, you can make a latte with it! But, no. Just no. You would never put the green tea into the coffee - And it is a COFFEE-themed afghan, brain! What was I thinking? Green tea will never do. (Nothing against green tea, though.) 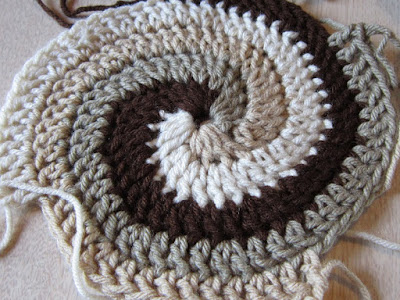 Rip van Winkle still insists that the color is brown. "Leave it", he says. "It matches the other colors", he tells me. No. It might match them, but it doesn't fit into a coffee theme. No matter what I do, how many pictures I take, or how insistent he is that it is brown, I'll never see it as brown. And I'll never be happy with my coffee-themed afghan. 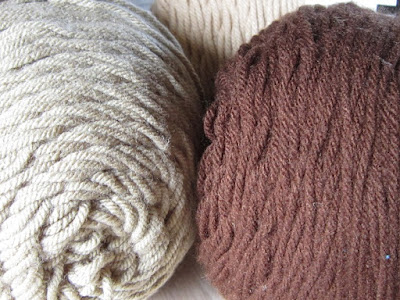 So, that leaves that simple answer again: Get rid of the Taupe. My four-color spiral design spiraled out of control, but it's not a disaster. Just by eliminating the color I'm unhappy with, the pattern went back to its delicious coffee-inspired goodness. Besides, a three-color spiral means one less ball of yarn to juggle! 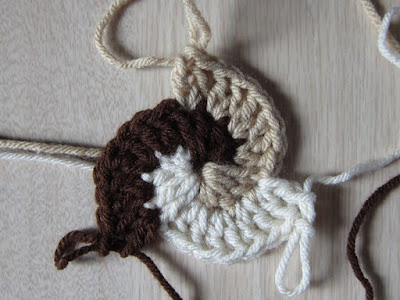 But... This design wasn't meant to be a circle! It was easy to put four corners on a four-color pattern. As I sat down thinking I could wing it and turn three colors into a four-corner shape, I quickly learned I was wrong. Paper, pencil, and a little more brain power will be required here. I never wanted it to be that complicated. Am I sure I don't want to use that Taupe? 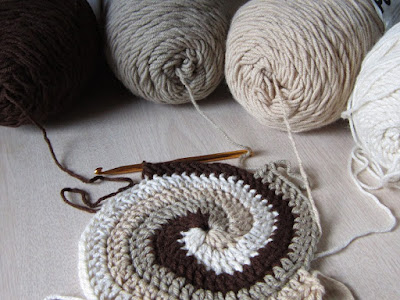 Yes! I'm positive that I won't be adding that color back into this project. Now, I have two options: Get that brain exercising and make the pattern work, or buy a different color for the project. Hmm. Loving lattes but preferring black coffee, I think an extra swirl of Espresso is in order here... Anybody with me?