Fuzz and Other 'F' Words

Feelings; fascination; fluffiness - I wanted a soft, fuzzy throw blanket for my bed, and I love the "fur" of Bernat Pipsqueak yarn. Freezing - I'm always cold, so I need a fluffy blanket. Fantastic - I finally found a rectangular pattern that doesn't curl with this yarn. Failure? Maybe. I was excited and motivated at first, but right now I'm feeling like...

My latest fluffy formulation is a freaking fuzzy disaster! I'd like to include a few other 'F' words in that sentence, but I don't use that kind of language here. I think you can still get my point, though. 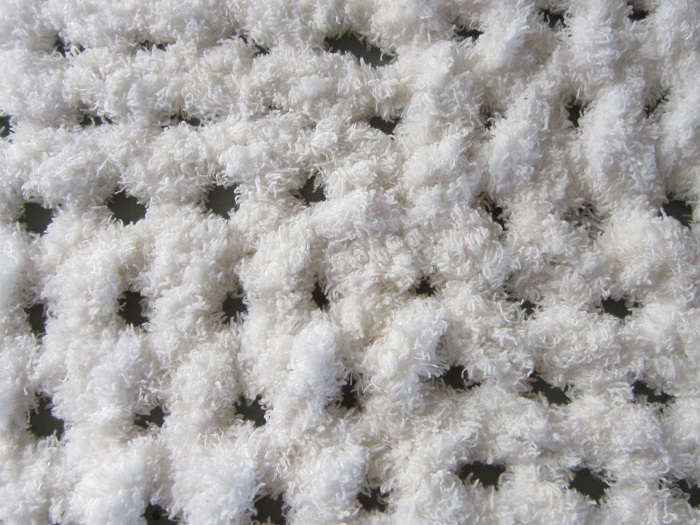 So, what's wrong? I think every crocheter knows this feeling: You're working happily along, envisioning your completed project... Then that thing happens that brings your work to a screeching halt... A knot in the yarn. Faulty yarn? This really can be a simple problem to fix, as I shared in a recent tutorial for the Russian Join. But now I feel like Karma has its teeth attached somewhere behind me, because after posting that lesson and telling you how "easy" it can be, look what I found: 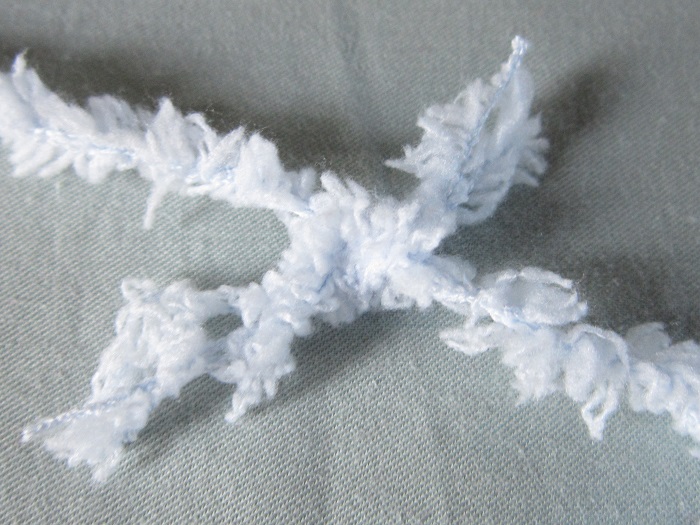 I'm ready to give up. It's not like I hate the blanket... I really enjoy the feel of the fluffy, fuzzy yarn, even though I don't like having to clean up the bits of fuzz that come from it. I'm having fun with the simple granny rectangle design, despite not really being able to see a single stitch. And I'm looking forward to keeping this downy-soft creation on my bed this winter, but I'm not sure if the five balls I have will make a blanket big enough... Nope, even with all those problems, I still can't forsake this project. I just hate this knot: 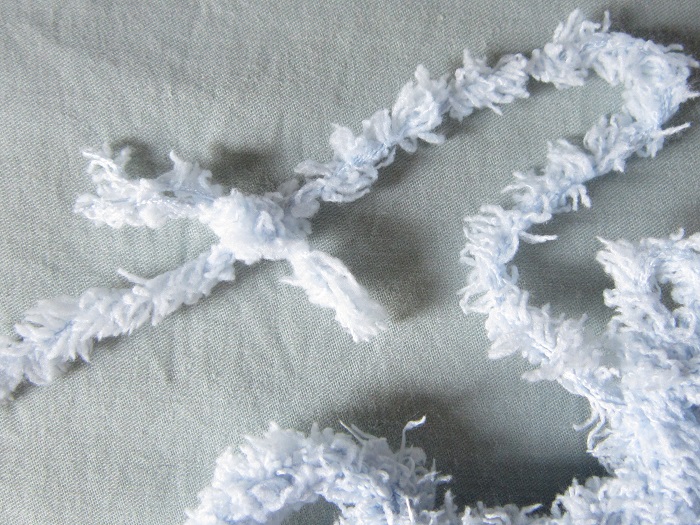 My motivation is beginning to fizzle away. Oh well, what can you do? I simply need to sit down and repair it, then get over this experience. It still makes me mad. I crocheted through my whole ball of white, to see how far it would go. Then I decided to rip back some, cut, and begin the blue. I often prefer darker colors, but I really like this blue: 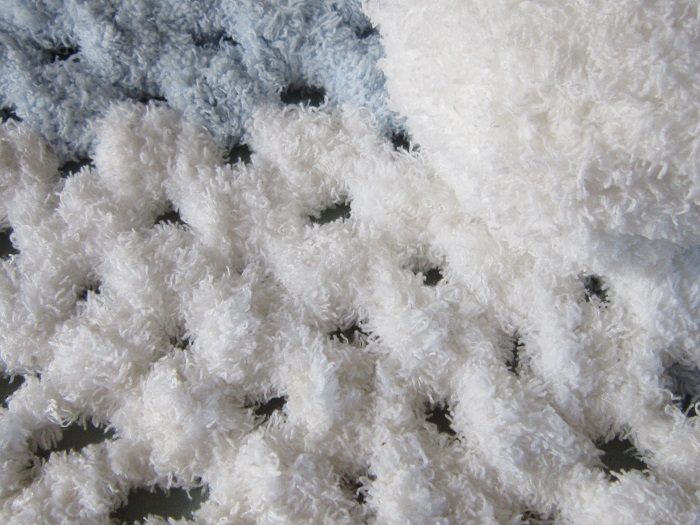 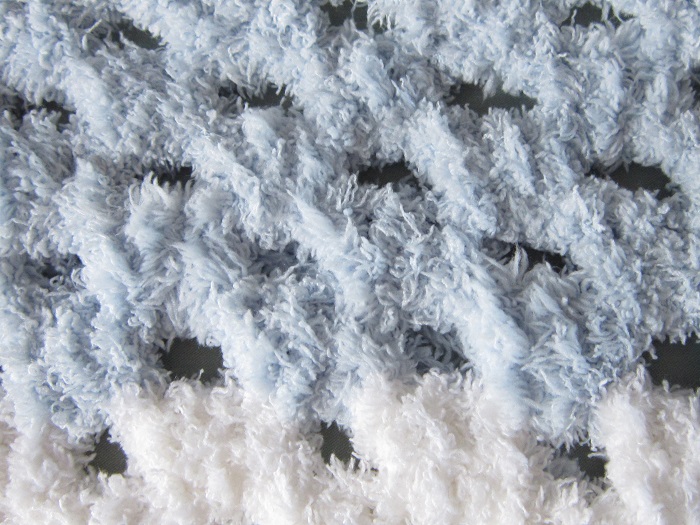 It's so soothing, isn't it? I wasn't enjoying the blinding whiteness of the beginning, and this blue calmed my irritation. After working a few rounds, the ball was running out. I planned on finishing the round, cutting the blue, and picking up the white again. I came to the last double crochet set in the round... Almost to the end of the ball... Flop. The mess exposed itself with an audible "here I am" on the table. 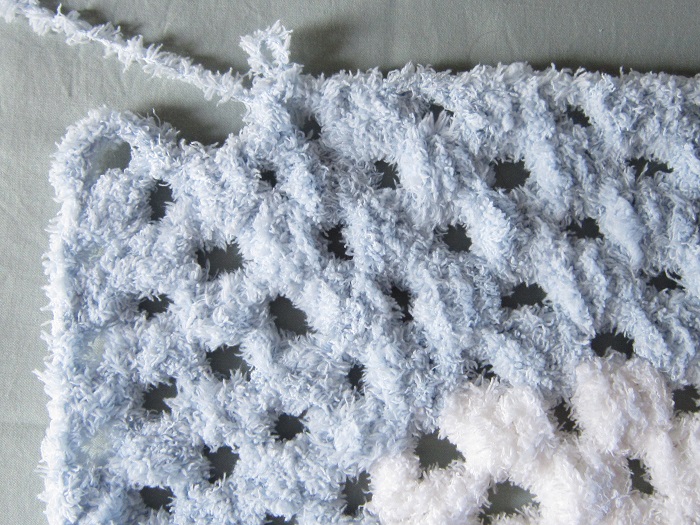 That was the end of the blue being soothing, and the beginning of quite a few 'F' words muttered at the project. But like I said before: What can you do? Yes, I'm frustrated. It's quite disappointing that I couldn't stretch an extra foot from the yarn to avoid the knot. This is not going to be fun. I just need to get it done and over with... 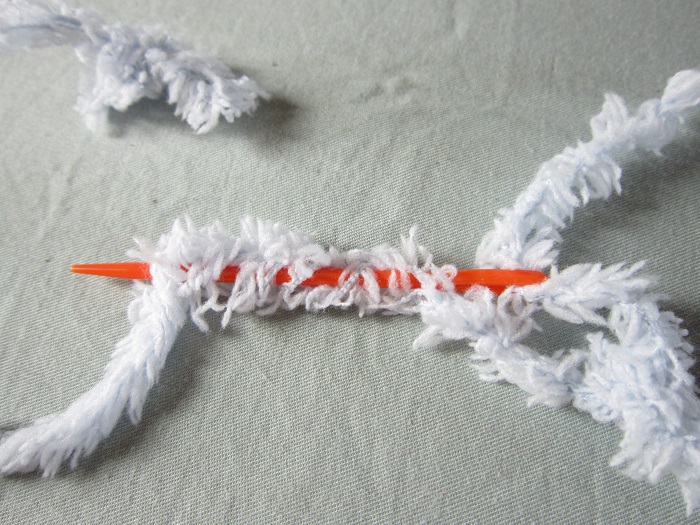 Do you figure there's a Russian Join being made somewhere in all of that fuzz? I think. I'm not actually sure if this will even work, because I've never used the method on a fluffy yarn like this before. And I think by the photos, you can tell why you don't see many tutorials for how to do this to fuzzy yarn. Well, there are plies in there somewhere, and I think I picked some up on the needle, so here goes... 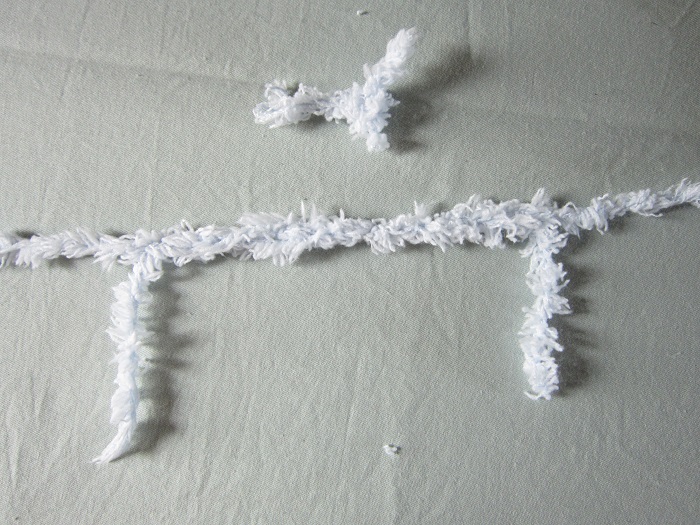 Yay, *happy dance*! Although it was 100% more difficult than joining smooth yarn, the Russian Join method worked. It worked so well that I had some trouble closing my loops! The texture of the yarn creates a ton of friction against itself, and I don't think I'll have any problems with it coming apart. Now, all I have to do is trim the ends, and find that stitch that I had to drop. Once again, I'll remind you that a locking stitch marker (or a cable needle) can be a great tool for keeping your working loop from pulling out... 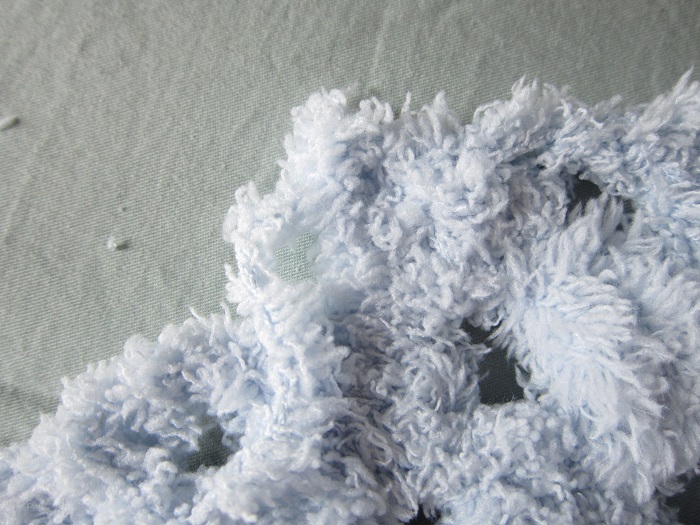 And once again, I didn't use one. Sigh. I'm starting to think these kinds of projects have no reward other than "I finished it". There's no "look what I made" pride in this work; I'm feeling more like "why am I doing this?" discouraged. To be honest, I felt like throwing this project in the trash for a fickle moment. I followed through instead, fixing the problem, despite having fears that the method wouldn't work.


I didn't feel like doing it, but I found the stitch I dropped, finished the round, and began with white again. Work has continued, and the blanket is getting fuller. I've now found the same kind of knot in three more skeins. Each time, I've wanted to give up again. 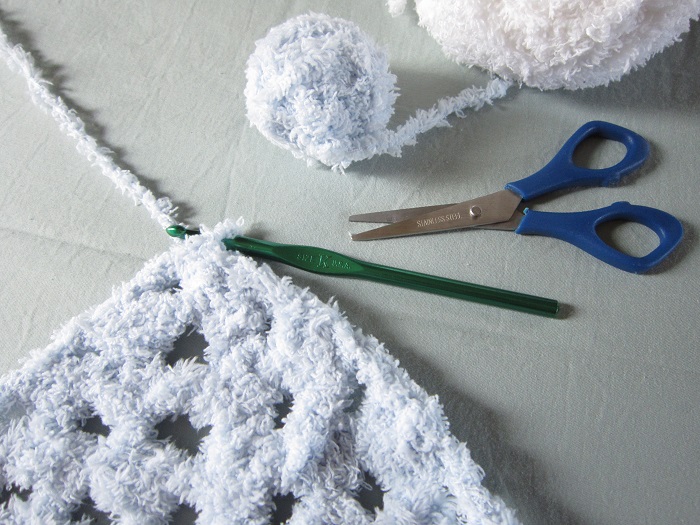 ...But I keep moving forward. Wow, maybe I'm finally turning into a full-grown adult! One that's making a fluffy baby blanket for her bed...