Yesterday I put all the projects I'm supposed to be working on aside, and dove into my first ball of Caron Cakes. It was delicious. At first I started playing around with the recommended hook size on the label, but my stitches were too tight and I kept splitting the yarn. I changed to a bigger hook, and the only way I can describe what happened is that this yarn became butter on my hook. After a few trials and errors, I'm pleased to bring you a successful WIP that will (hopefully) soon be a free pattern: 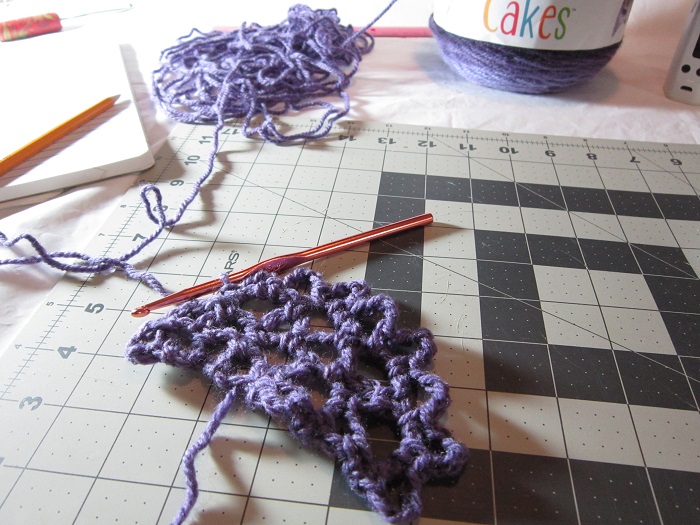 At first, I tried recreating my "fairy" shawl pattern using Cakes. Even though both yarns are worsted weight (4), the original yarn I used was 100% acrylic. Caron Cakes is 80% acrylic / 20% wool, and gets a little stretchy once worked up. With the same weight yarn and the same size hook, my beautiful shawl pattern became a puckered mess when I worked it up in Cakes: 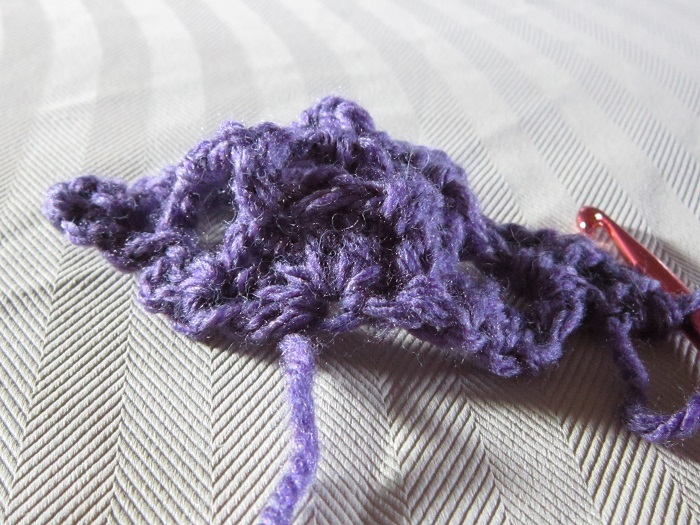 This is where I got a little discouraged and started thinking about cheesy titles for a blog post revolving around "having your cake but not eating it". But since dinner was keeping warm in the oven while Rip van Winkle (formerly known as The Other Half) snored away in his chair, I got down to business, frogged what I had created, and worked up a gauge swatch: 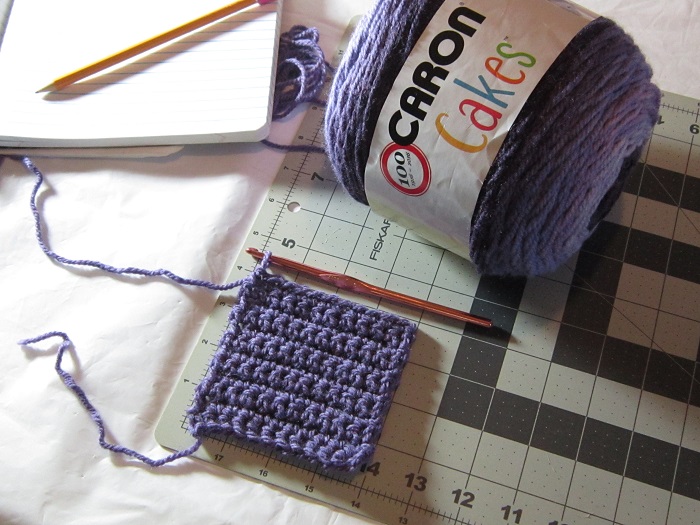 I was able to adapt the pattern to something that didn't pucker by changing some stitches, but I tried to follow the same number of multiples and increases. What was supposed to be a crescent shawl quickly became a lacy bib: 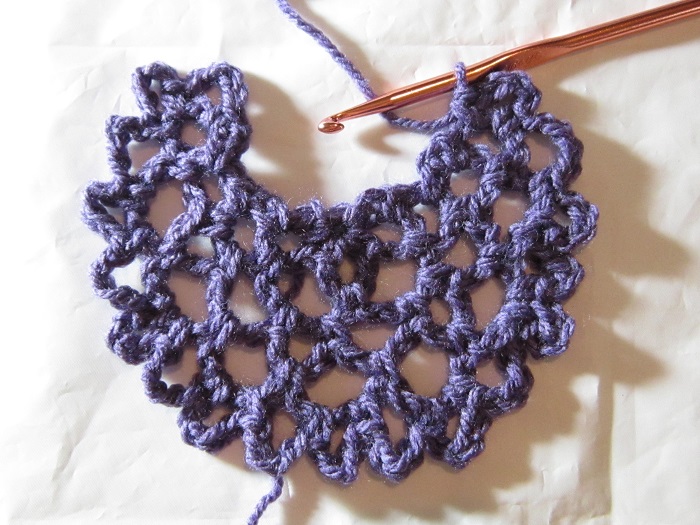 I frogged again, with Rip van Winkle now snoring through a raging thunderstorm. Maybe I should have went ahead and fed myself instead of waiting for him, because my brain power seemed to be getting low along with the light. I tried to tweak the pattern again, but failed to notice the design was lopsided. One side curled too much, while the other side remained flat with no increases: 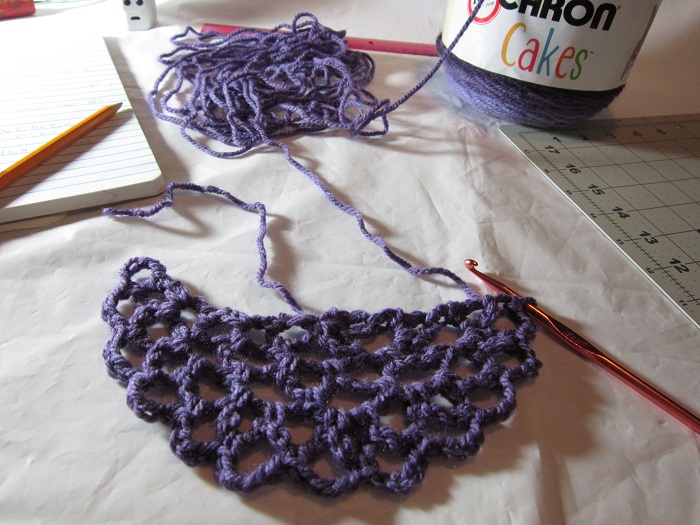 Maybe I'll try that again sometime to see if it would make a nice asymmetrical design, but that's not what I'm going for with this one. The rain stopped and Rip van Winkle awoke from his slumber just as I finished frogging again. I had to move a pile of ripped-back yarn so we could finally eat, but thankfully it remained untangled.


The mysterious man-creature disappeared to shave 100 hours of stubble off his face after dinner, and I began another design. What a disappointment; it was going so well for the first five or six rows... I even got the treat of hitting a color change in the yarn. Then suddenly, a perfect design started curling around too quickly again: 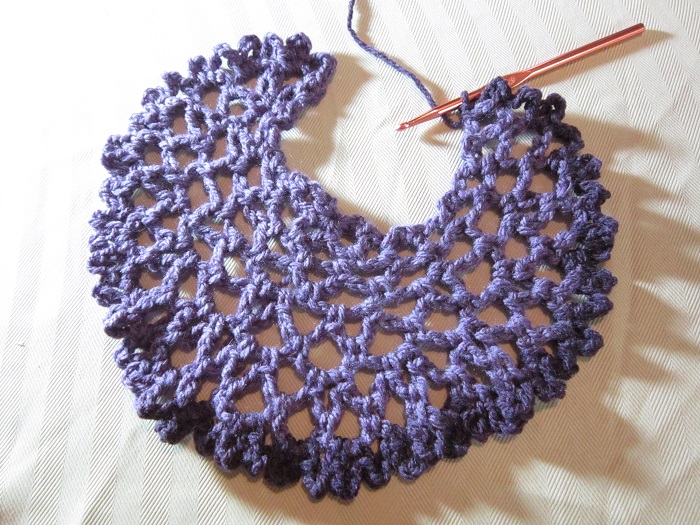 But there is good news to be found in all my failures! Once again I ripped back my work, knowing what I needed to do to fix the problem. It's going to change the shaping just a bit, but it also makes the pattern even easier to follow (and write). There's another thunderstorm coming again, and Rip van Winkle should be due home for his daily slumber soon. I hope to work up the majority of the shawl tonight, if the noise isn't too distracting.


I have to praise Caron Cakes for taking so much abuse. Frogged again and again, it's a bit kinked up but not much worse for the wear. In the following picture, you can see the lighter purple bit that has been ripped back about 15 times, compared to a fresh part of the yarn just pulled from the ball.  Although the part that is looped around looks fuzzy because my camera refused to focus on it, the frogged yarn isn't really any fuzzier than the part I haven't worked with: 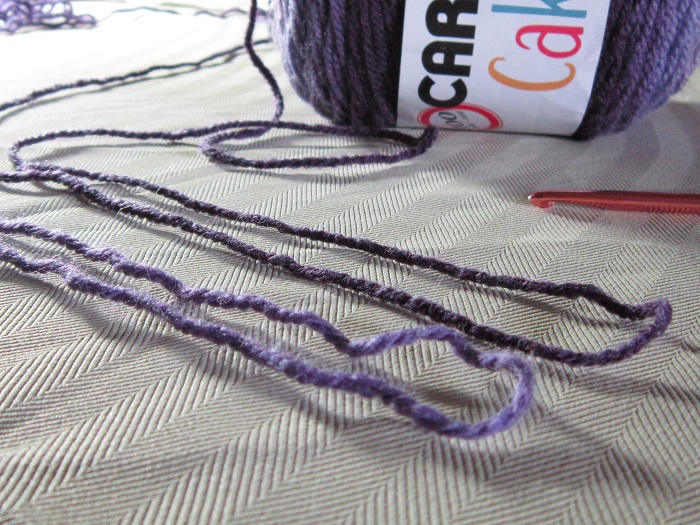 And I'm still happy to report that the low wool content isn't causing me any reaction! After suffering terrible itching and rashes from 100% wool yarns, I've been afraid to touch any of it at all. Knowing that I'm not allergic to lanolin, which is what causes a true wool allergy, I'm thinking this could be a way for my sensitive skin to build up a resistance.

I'm still new to working with Caron Cakes, but so far I give it a five-star, two-thumbs-up review. I had to wait a while to find it in the local Michaels, maybe because this is a smaller town. Now that they have it in stock, it will be hard to keep me from going back for more. Somebody should probably try to stop me, because I'm not supposed to buy any more yarn! But since this is a new yarn that many people are eager to work with, I've decided to publish all the patterns I design with it for free. So, you don't want to stop me, do you?