If you're on any kind of social media, then chances are you've seen a "that feeling when" meme. Over the past few days, I've had a lot of "that feeling when" yarn-y moments. I'm willing to bet that a few of you have been in my shoes, so I thought I'd complain about share what's going on. 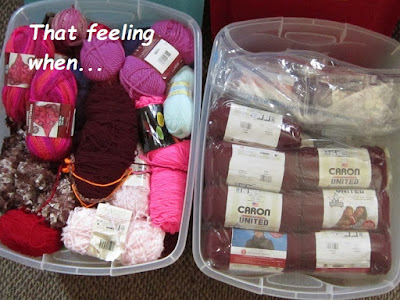 That feeling when someone is willing to pay the price for a handmade item...
I was as content as this little elephant seems to be. 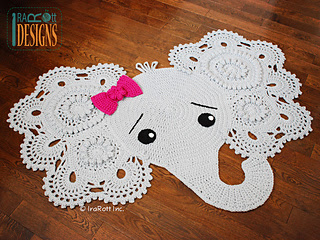 That feeling when you find out the yarn company is running a site-wide sale, so you can get the yarn for less...
Yay!

That feeling when you find out the color you need is out of stock...
!#@! That feeling when you search other sites to find out they don't carry that color...
That would just be a photo of a one-finger salute, so let's not go with a picture there. 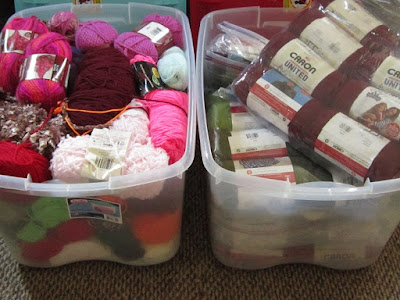 There's more to it than just what you see there. And now, I'm over the feelings. It's time for a lot of sorting, untangling, and winding. I swear The Troll gets in there and messes it all up when I'm sleeping. I just did this a few months ago, and I've only been in that bin twice since organizing it!

On the other hand, the second bin is still nice and neat. But like that weird way a bowl of spaghetti seems to grow as you eat it... I can't make a dent in that container, despite using 15 - 20 skeins on Mom's Afghan.

Although I never found the yarn I needed in my stash, I did start to get everything organized again. The Troll should have fun tonight. I have a new feeling that what I'm looking for is in one of my other boxes of WIP's. I'm not going there. 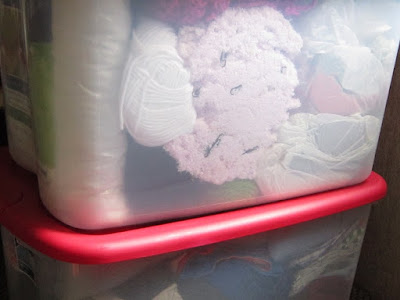 Believe it or not, that WIP bin is organized, by category: Works in progress that are actually in progress are in separate bags, stacked in order by "less work to finish" first. Unfinished objects that require ripping out are stuffed in by random order, and then there's a pillow form that's for a WIP, so it counts as organized.
:)

There is a lesson to be learned, but I'm not sure if I'll ever pass the test... Take the time to keep things in order, and organize as you go. I can blame it on The Troll, but I'm probably the real culprit. Keeping my yarn stash in these plastic totes is a great way to keep it safe from cats and dust, but you can see that an extra filing system is needed here. The bin with the yarn organized by color and kept separated with bags stays organized. But the random "throw it in a box" method isn't working for the rest of the stash.
How do you keep your yarn and WIP's organized? Or is your stash a mess like mine?

If you're a Stash Slob like me, let's make a goal to do something about it. Yarn is our friend, right? Let's treat it better! I'm going to take just one hour a week and dedicate it to untangling, winding, or ripping out (which leads to more winding). Don't have an hour? How about ten minutes? C'mon! Being able to get to your yarn faster will lead to more