Dear Diary - Oops, I mean Blog Readers - Sometimes I feel like a failure. And when I'm feeling that way, I have a difficult time getting things done. I don't mean in a whole-life kind of way, just in a crochet way. Simple flowers. All I needed to create were some simple flowers, but I haven't been able to work up any that have sparked the "that's the one" feeling. I tried designing my own. I scoured the internet and worked up a hundred free patterns from across the web. I ripped them all out and went back to designing my own.


And I've finally found it: The perfect flower for Mom's Afghan. Adding to my peace of mind, I've also found the perfect coffee mug and scented candle, but I just liked how they looked in the picture and they really have nothing else to do with this post (lol). The original plan was to make the flowers using surface crochet. I even worked some funky open chain spaces at the corners of my joins, because that was supposed to be the base of the flowers. I wanted something with texture, but not too puffy. And when I started creating the surface crochet flowers on the afghan, I learned that they were going to be too puffy. 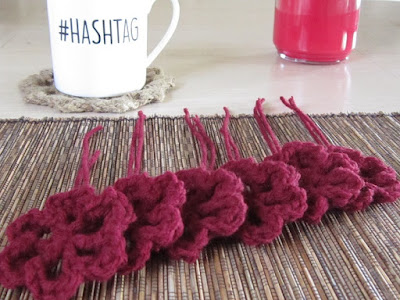 So, like Goldie Locks trying to find perfection in a furniture warehouse, I tried another one and another one... I tried about two dozen ways to work the surface crochet, but it either pulled a little, it was too textured, not textured enough, or just wasn't what I had in mind. The good thing about surface crochet, like any embellishment, is that you can decide to skip it if you don't want it. But when you need that embellishment to cover the open spaces you made specifically for it, you better figure something else out. 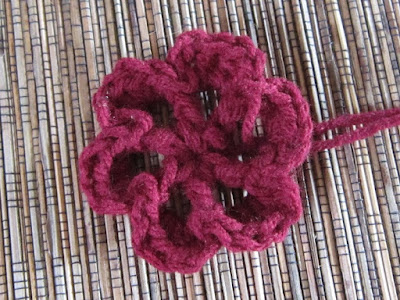 Of course, I could make this easy and just work some random motif... But in the back of my mind - No, it needs flowers. I decided to work the flowers as separate pieces and sew them in place. First try - Too frilly. Second try - Petals are too pointy. Third try - I don't like the center... Again and again, I ripped apart my work in frustration. I gave up on the idea of flowers and started working on the vines I planned. They wouldn't work out right, either.


I apologized to Dad for the delay in the blanket, and he thought maybe it was a sign that I shouldn't add flowers. I moved on to more ideas, but still in the back of my mind I had that thought that was more like a command: It needs flowers. But the voice in my head isn't pushing for any vines, so I gave up on them and went back to flowers. Finally, the TV Tornado incident forced me to set the project aside, and that lead to picking up a different project (the squishy rubber rug). At least I completed something.


I guess that's what I needed. The day after completing the rug, I got back to creating those flowers. I worked out a center that paired well with the open spaces, and decided to keep it the same and make the petals fit somehow... I worked out a few variations for them, and it inspired a new "make your own" pattern that I'll put up soon. 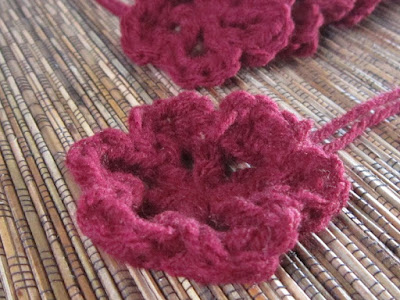 Although not as realistic as I had hoped for, these simple flowers are quick to make and easy to adjust. They have a bit of depth to add character, as you can see in the photo above. But the biggest thing I was looking for was smush-ability... Meaning, they should flatten out easily. And then go back to being textured again, too. I think to have all that, plus be realistic, is just too much to ask. At least I got the textured-but-smushable part right: 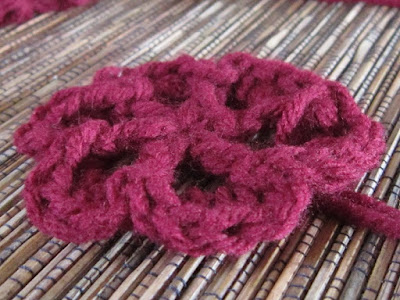 The open center not only fits perfectly over the places I created for the surface crochet, it saves yarn, too. What I couldn't save is that poor piece of scrap I was using to "create, rip, repeat" during the grueling design process. Who knew simple flowers would end up being so difficult?


All that's left is to sew the flowers to the afghan using the tails. And then weave in any extra ends, because I keep finding a few that I've missed. Also, there's still the idea of adding vines... Maybe I'll forget about that, because I may never get it done. Simple squares for a simple afghan, and simple flowers to embellish it: That's all I really wanted. I need to learn how to keep my creativity from going into overdrive. Perhaps deciding to call Mom's Afghan "done" after the addition of the flowers would be a good start. It's what the nagging voice in the back of my head is telling me to do now. I like it better when it does that, so my new coffee mug won't get overused and the candle won't be burned down to nothing... 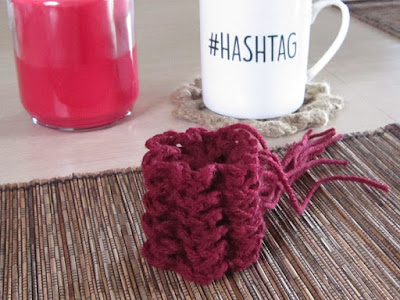 Aw, who am I kidding? That will happen anyway! I have a ton of crochet to catch up on, and still need to get back to the beginner's series. My change of mentality should help me move on with that, because there's just some things I need to let go of in order to move on. The backdrop I use for videos got destroyed (again), and I'm not going to bother replacing it again until I get my office done.

Sometimes you have accept that you need to move backwards and return to simpler times before you can progress again.
Or maybe, sometimes you have to build a wall to get people and pets to respect your work space...

I wanted to end on something inspirational, but now I'm just confused. Maybe the answer is a little of both. I know I'll figure it out eventually.