Now that the weirdness of the last post is off my chest, it's time to share with you the really important things that happened while working on Mom's Afghan. It seems so strange to say that there are good things to tell you after an illness and death... But I truly did find goodness mixed in with all the bad parts.


If you read the post "A Call for Prayers", you'll find a part where I mention not believing in angels, except for the ones that walk the earth. They may not have glowing halos or float on clouds, but they do shine light in our lives. I hadn't seen one in a while, until Mom's stay in the hospital.


After the surgery was over and she was moved to the ICU, many different people came and went, but a few became solid fixtures. The first was my dad. He reminded me that if I don't point out my mistakes, nobody will ever notice them. At the same time, if I'm not happy with my work, I should fix it. It's a lesson that I can use in life as well as crochet. 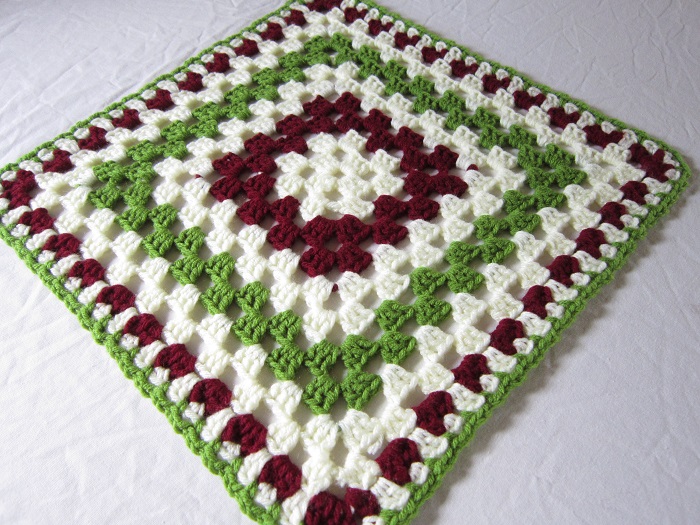 The next was a nurse, Carla. She and I talked a lot while she was in charge of my mom's care, but one of the main subjects was crochet. As she explained about medications, ammonia levels, and liver damage, the subject would often go back to crocheting. She used to crochet, but says she doesn't have time for it anymore. Her mom still crochets, and she wanted to know a good place to buy yarn to send her. Just for that, she's an automatic angel in any crocheter's eyes, lol.


But seriously, her honest explanations of what to expect were better than the doctors saying "let's keep our hopes up". Mixing the information with talks of crochet helped keep me distracted (in a good way), and either she knew it or she just really likes crochet. She asked what my favorite stitch was, and in the moment, I couldn't think of one. She told me her favorite was the shell stitch. When I decided to deviate from the simple granny square pattern, I added a split-shell stitch. A different nurse was in charge of Mom by that time, but Carla continued to pop in and ask if she had woke up yet. And with a simple conversation about stitches, she became a permanent part of the afghan. 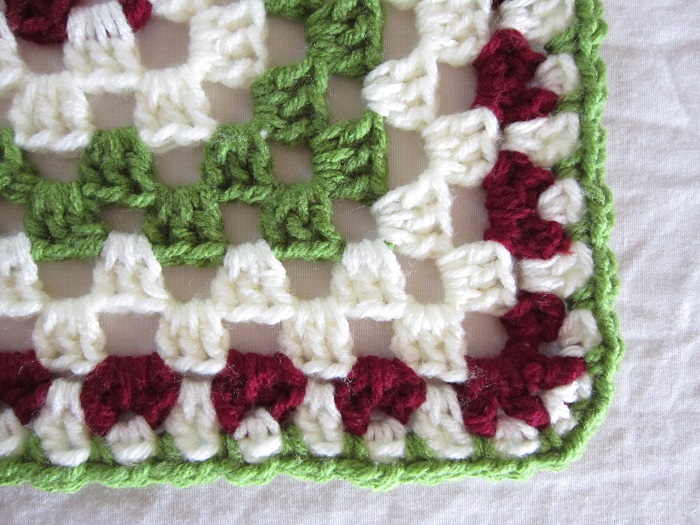 While Dad and I were on a coffee break and I was joining squares, a cafeteria worker stopped to ask what I was making. He explained that he had just purchased a knitted set from a lady upstairs, for his granddaughter's first layette. He told me "There's nothing better than handmade for those special little babies". In this world where the value of handcrafted items is often forgotten, he has no idea how much his words can brighten a crocheter's day. 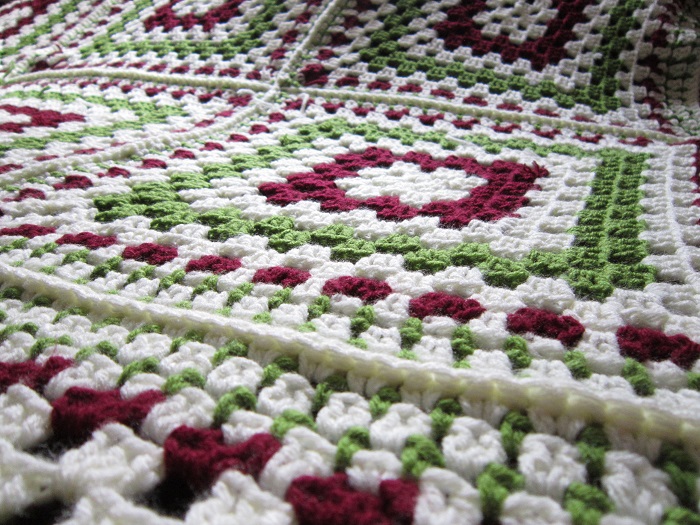 And for some strange reason, he inspired me. An idea began to form and I just couldn't shake it... I've never donated anything for babies because of contamination issues: Although I don't let my cats in or on my yarn, if you live with cats, you know their fur magically deposits itself everywhere. And with the Other Half's concrete career... I swear, some days he looks like Pigpen walking through the door. Not only could the dust trigger asthma, it can be caustic and irritating to the skin, too. Yes, I wash items to be donated, but I just don't want to take the risk with extra-sensitive little ones.

So, what if I were to buy the yarn, take it to the hospital, and make a blanket?Then leave the blanket there for some new little one. It would still need to be laundered, but I bet I could find somebody there that would be willing to help out. This hospital is full of volunteers, and all I need to do is find the right one. Perhaps I should offer crochet lessons in return for laundry service? Or maybe the hospital would make sure it gets laundered anyways... Well, the plan has started, and all I have to do is start asking questions.


I was upset over leaving, but it was a smart decision. After a short argument over who should drive my car (lol), I got in and turned the key. Buzzzzzzzz... Click. Cuss words. I get out and open the hood to check the terminals, because they come loose regularly and this happens all the time. Not. Loose. As the Other Half gets out to help, I think "Hmm... It was raining when he got here". Walk around, turn off the headlight switch. I ask him to get the jump box, but he tells me he never put it back in the car. Cuss words again.


I have jumper cables, but there's a car parked on the same side as my battery. From across the lot: "Ya'll need help?" Some blue-collar boys are hanging around their big jacked-up trucks. Yeah, but... "No problem", he tells us. After digging in the toolbox of what he said was his dad's truck, he pulls another truck over and produces the longest jumper cables I've ever seen in my life. A minute later, I'm up and running again, and he's refusing any money for his help. "I can't take that, I just hope somebody would do the same for me" he said. Sure would, if I could even pick up your giant jumper cables.


Sometimes, you just can't repay people in kind. But who knows? Maybe some day the guy will have a kid there, and a blanket I make will go home with them. The world works in funny ways.


I was taught a lesson while discussing crochet with many random people: Unless they're interested in learning, don't bother to correct them over whether it's knit or crochet. One woman even called it quilting. The point is, people will tell you their stories more freely if you just shut up and listen, instead of worrying about terms. I heard so many memories of somebody's mother, grandmother, aunt, sister, or neighbor crocheting, knitting, or "quilting". People don't want a lesson in what you're doing, unless they're asking for it. They just want to tell you that you remind them of their grandma. Rather, you're making them remember Grandma. Say thank you.


On a related subject to that, I was told repeatedly that I'm too young to be crocheting. Those are the people I took the time to correct. You would be surprised at how fast someone will get interested when you tell them "it's been the hottest new craft for the past few years, since the fashion industry picked it up". Now you don't look like Grandma anymore.


I was told that one last time by the hospice nurse, Rachel. But she said it in fun, not like an insult. She also told me that she "knit", but she made a hooking motion when she said it, so I think she might have meant crochet. She was of foreign descent, and I think some cultures do call crochet "knitting", or it doesn't translate properly... Anyways, I didn't bother to correct her, and she told me of a jacket she made for a little one in her family. It was made of tiny squares sewn together, and she was so happy with how it came out. I was so happy to have a distraction from Mom's labored breathing.


The final days in hospice were a welcome difference from the hospital. A private room, free coffee, and soft-spoken people that called my mom "sweetheart", "honey", and "dear heart". Even a couch that I could spread the now-joined afghan out on, only for my dad and me to decide that it looked funny that way. I had joined the blanket in two parts, thinking that it would make a cool design. We both agreed that it looked like two blankets sewn together. 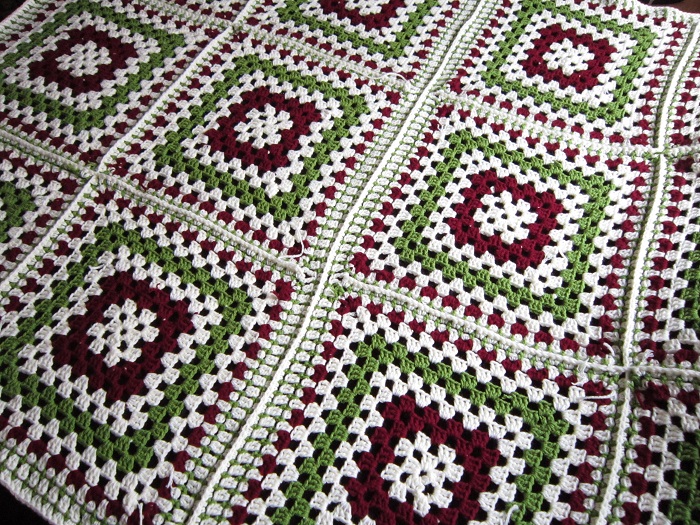 I planned to unravel the seams and do it right, as the seams of my life unraveled. I got the call the next morning: Get to hospice now. In a rush, I ran out the door without my project, and I wish I had it for her last quiet moments while I was screaming in my head. But when I finally got home that day, I spread it out and set to ripping the seams. It had some therapeutic quality, to be taking something apart instead of falling apart myself. 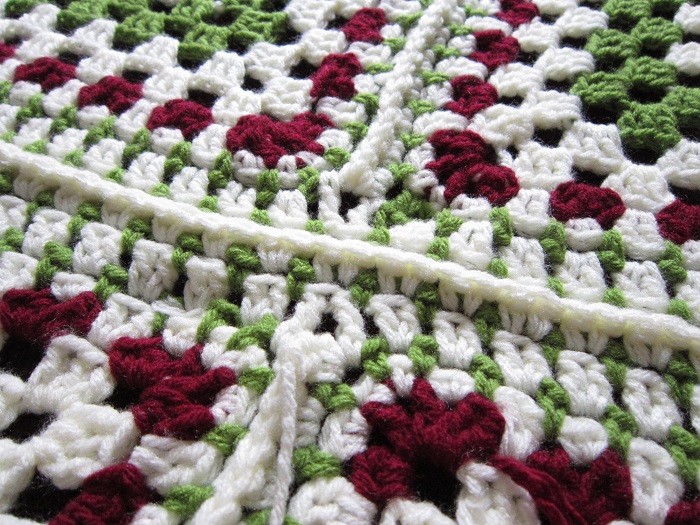 It's been seven days now, and I'm still working on putting it back together. Funny how crochet can make a great analogy for life... Even though Mom will never get to use her afghan, she has been a big part of it. And during her most responsive day off the ventilator, she did say it was "verrrrry pretty" as I held it up for her to see. The people that became memories during her last days will probably never know how much they inspired my crochet, but nothing is as important as those last words from Mom.


Crochet can be a part of an old memory, make a new memory, or be a memory in itself. Mom's Afghan is all of them. Before you ask for the pattern, know that I'm not ready to release it yet. If I can pitch it to the right place, I'd love to publish it in a magazine, along with an article to raise awareness about alcoholism. Her death came too soon (only 65), and didn't need to happen. If her afghan can help stop that from happening to someone else, then it will become so much more than just a memory.