Well, this is me trying to get back to blogging, and it's weird. I wanted my first post after the past few weeks to be light and uplifting, but I'm just not there yet. Instead of creating some fake-happy load of nonsense, I decided to share a bit of Mom's Afghan while spewing out a few strange events that have happened, as well as some things I realized during my time away from the blog. I have so much to say about the days that lead to her passing, and most of it has a positive side. This post isn't about any of that. It's about lessons learned, dark parking lots, and possibly a haunting. Ready?


During the three weeks beside my mom's hospital bed, I had a lot of time to think (and crochet), and I realized how much time blogging has taken away from my crocheting. I really do need to take more breaks from the blog-o-sphere to reconnect with my work.


Turning your hobby into a career can make you or break you. Crocheting has become stressful for me, because I'm always worried about recording my stitches and fixing mistakes... Which is all a side-effect of blogging and writing patterns. The first part of Mom's afghan started with simple granny squares. It made me realize, as stupid as it sounds, that I can crochet so much faster (and I don't have to think so hard) when all I have to do is crochet. 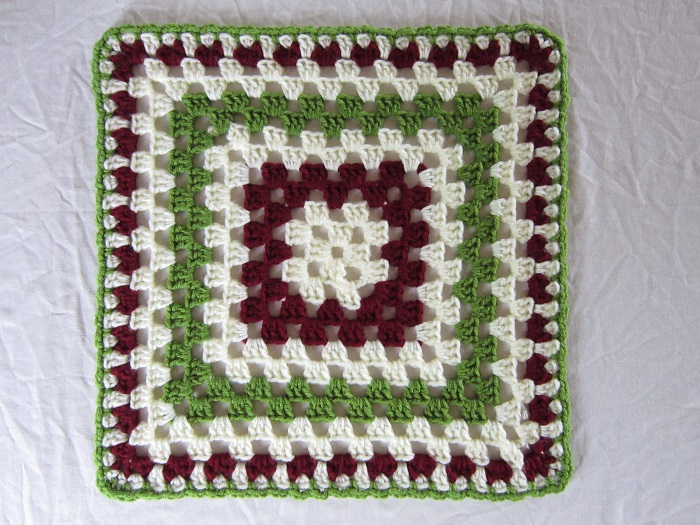 Reading those thoughts might make you think I'm going to give the whole thing up, but I simply need to find a better way to manage what I do. The problem with that is, something always goes wrong with my ideas. Here's a few examples:


Logic says okay, fix those things. But that's where we have to go to Weird Land for an explanation... Just like with "The Troll", I don't really have an explanation. The lights flicker, then my phone and camera batteries drain simultaneously.  I know I'm not crazy, because I've been checked out and deemed safe for society, and other people witness these things, too. Stuff flies off of shelves here, and people say my house is haunted. I kind of laugh it off, but I'm starting to wonder if they don't have a point...


Before you dial 1-800-NUT-CASE, know that I believe in science and an an explanation for everything. But I also believe that science hasn't explained everything yet. So, what is it? Solar flares? Electromagnetic waves? What is the garbled static in my audio that I've been told sounds like demons growling? The Other Half got freaked out so much that he made me delete it. And I can confess that listening to it raised my own hair. I should do some more recordings and upload them so other people can hear it... Besides all that, I have perfect shoots with stuff like this next picture in the middle... That shadow in the corner wasn't there when I took the photo: 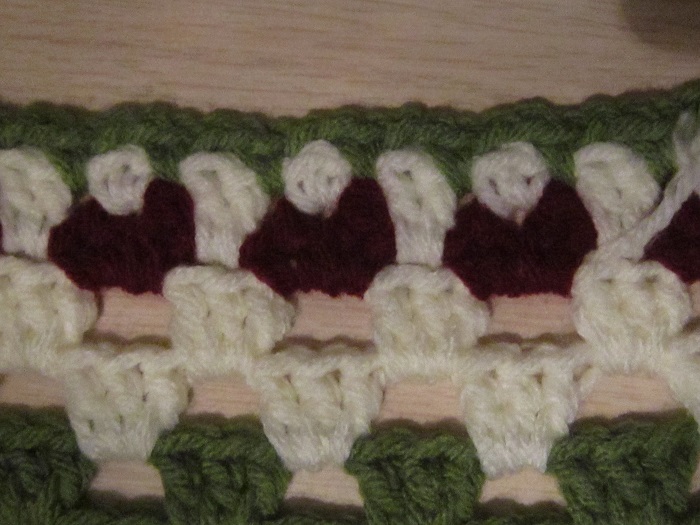 So... Yeah. If my friends are right, then I don't know how much a new battery would help me unless I get outta here. But I guess I should spend the money and find out, before I call an exorcist. And now, I do think it's time to move on from that subject, while a few of you still take me seriously. But the rest is just a whole other load of creepy...


During one of the days that Mom's numbers were declining, I stayed later than usual, crocheting in a dim corner of her ICU room. A nurse came in: A big, tall, strong-featured guy with a deep voice... He told me that he had heard angels singing and received a message from God, and that's what lead him to where he is today. The funny thing is, I knew each one of my mom's nurses, and saw them all more than once. That was the first and only time I saw that guy. That is more strange to me than the stuff that happens in my house.


I had three other weird things happen at the hospital, but on the other side of the creepy spectrum:


Leaving mom's room late one night, I took the nearest stairway. Nobody was behind me. After turning the first landing, I heard the door above open and shut. Then - Step... step... step... Stop... Step, step, step, stop again. I'm on the second-floor landing, and I look up. Some weird-looking dude is looking down at me.

Let me explain that this hospital seems to have it all backwards... Security goes home at night. The main entrance closes, and you have to enter through the emergency side. I'm parked at the main entrance. I run out the door that locks behind you, with no way to get back in. In the dark, because all the lights are covered by trees. And I'm parked all the way at the other side of the empty lot, because it was full when I got there. But I could see my car from the ICU above, and had checked to make sure it was all clear before I started down the stairs. I mean, I'm not stupid, you know?

So, I run out the now-locked-behind-me door, halfway across the lot, and nobody's behind me but I'm still freaked out. That's when I double-freaked out, because parked directly across from my car is an all-black car with tinted windows so dark, they have to be illegal. You can't even see the dash of the car. Then I realized, that car wasn't there a minute ago, I didn't pass anybody on my way in, and why would they park there when the whole lot is empty? I just stopped, like an idiot, and stood there in the empty parking lot, trying to figure out what to do as horror movie scenes flashed through my head instead.

I heard the squeaky hinges of the hospital's side-door open behind me, and I made the split-second decision to finish my run. I got out of there unharmed, but never stopped checking my mirrors the whole way home. In hindsight, maybe I'm not as smart as I think, because I never even thought to pull out my phone... Just "keys and run". I'll never know if Creepy Dude in the stairwell was connected to the black car, or if that was even him walking through the parking lot. I just know it scared me enough to make me start leaving Mom's side a little earlier in the evenings.

I count that as two creepy situations, because I don't think Creepy Dude had enough time to make it up to the ICU from the parking lot. Whoever parked the car there did it while I was coming down the stairs, and the other guy was already behind me. And maybe the whole situation was just nothing, and I was freaked out for no reason. Unless... Are there weird people out there that get their kicks from scaring people late at night in hospitals? Maybe it's somebody's idea of a joke. If so, I don't think it's funny.


The third, final, and most creepiest thing that happened took place once again in the parking lot. Most nights, I was still one of few vehicles left in the dark, empty, security-free lot. I got more paranoid, and started skirting widely around my car before walking up to it. I scanned the lot. I checked for flat tires. I peeked in the backseat before unlocking the door. I... Almost came out of my skin when a man stood up from the other side of my car!

The passenger side was facing the building, and I never saw anybody while I was walking to or around the car. The front was the only place I didn't check, but this guy stands up from the the back of the passenger side, as if he was crouched next to my gas cap. The only thing I can figure is that he had crept around from the front when he heard me coming. But why? What are these weirdos doing? He just stood up, back turned to me, and walked away without saying a word or looking back. I thought of asking "hey, what are you doing?", but I decided to shut up, let him go, and get outta there.


After that, I started moving my car closer to the building when my dad would leave in the evenings. I hated doing that, because I'm the tough girl, you know? I don't want to feel like some damsel in distress, having to move my car or be walked out just because it's dark outside... Nothing even happened to me, other than a scare. But really, I guess there's no harm in being smarter even if you are tough.

Besides, I couldn't run as fast with my project growing in my bag. Five skeins and a small afghan became I-don't-know-how-many skeins and a full-sized blanket. Some days when we went down for a coffee break, my dad would take my bag in the elevator so I didn't have to carry it down the stairs. And as I continued to crochet in the cafeteria, people stopped to talk about it. 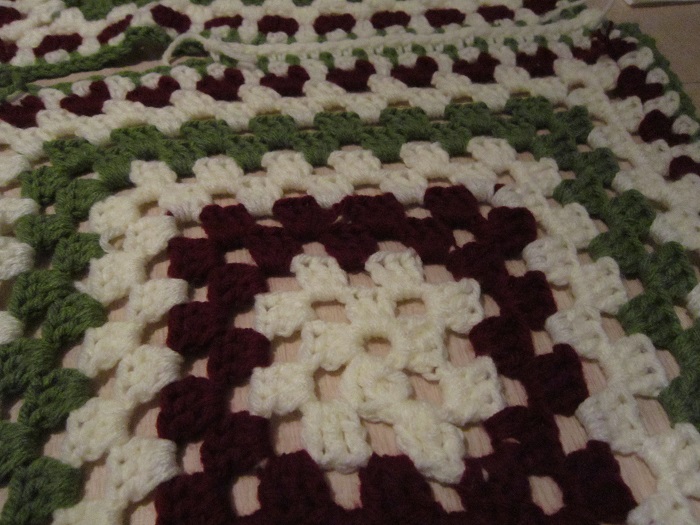 Nurses came in to the ICU room and asked questions or shared stories about crochet. Doctors commented on my crochet. My dad and I talked about crochet, and he gave me a few opinions that were considered during the creation of Mom's Afghan, which will now be given to Dad, anyways.

No more creepy happenings occurred at the hospital, but they did continue at home while trying to snap some pictures of the project. The whole mess has bothered me enough that I wanted to get it off my chest, and save the good side for another post... Because even through my mom's death, I was shown a GOOD side of the world that I haven't seen in a while. It all seems to belong in its own post, where its light can shine. I promise I'll share soon, free of ghost stories.