I'm amused by the amount of people that are curious about my crochet tools. I currently have another of my home-made tools "on display" - Meaning I'm working on a project, so it's sitting on the table. This tool is pulling in an unusually high number of questions... Well, one question: "What is THAT?"


The sarcastic part of my brain starts thinking "Well, it has crochet pieces on it, so obviously it's something for crochet...", but the teacher in me starts explaining. And I always get the response: "Huh. Cool!" This interests me as much as my crochet tool seems to grabs the interest of every guest. Why "cool"? What's so cool about it? I mean, it's just some stuff I recycled into something I won't have to buy. I guess that's cool, but it doesn't seem to me like something that would interest a non-crocheter so much.


So I'm tickled by the response, regardless of how strange it might be. I decided to have a little fun and take my crochet pieces off of it, to see if you could guess what it is: 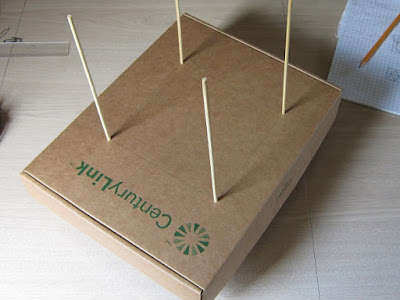 I bet you can guess what that is, without the crochet pieces on it! (And no, Smarty-Pants, it's not a new router, that's just an empty box.) Maybe if you're a very new beginner, you might not know... But you learned crocheters can figure it out! Just in case, I'll give you a hint: 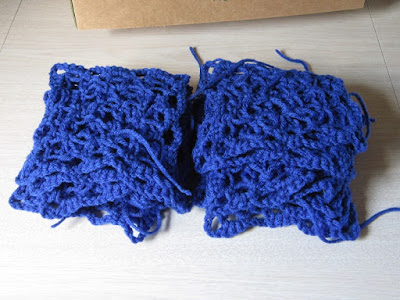 Squares. Lots and lots of not-so-square squares. So, I've been keeping these squares stacked up on this "strange" crochet tool... What on earth could I be doing? I can tell you one thing: I thought I was done and ready to join my squares, but realized I'm three short. I counted them twice and was sure I had enough... I set them out this morning and found some missing. Must be that darn Troll again!

I'll be finishing (or recreating) those last three squares instead of joining today like I planned. My hands got sore, so I took a short break to share my amusement with you. Why does this tool attract the attention of all my guests? It seems like such a simple, non-attention-grabbing thing to me. I'm curious as to whether this happens to other crocheters, or if I'm really as weird as people make me think I am (lol). I'll leave you with two more questions:

Do you have any home-made crochet or knitting tools that make people ask questions?