The secret is out: The Kid saw the project, so now I get to blog about it! *Sigh* It's difficult to share a work in progress when it's intended as a gift or surprise... Especially when the sneaky little recipient says she's not going to read the blog, then surprises you with "I saw the project you're working on with the pink fuzzy yarn!" 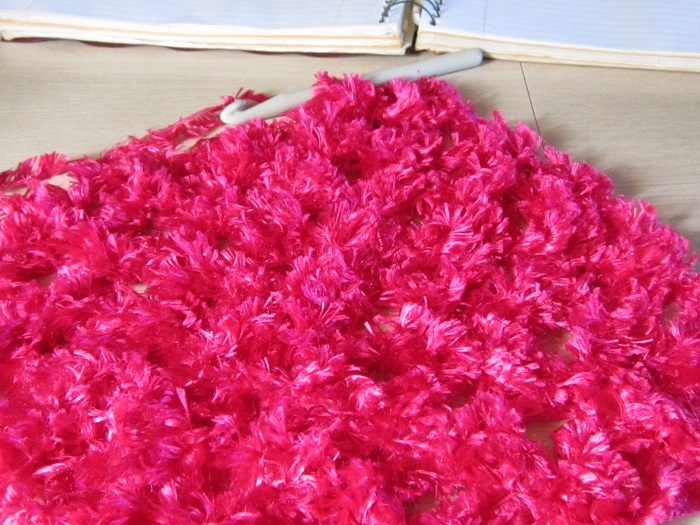 Many crocheters find it hard to work with certain novelty yarns, and Bernat Boa is one of the most complained about. Anything with fur, fuzzies, or fluff makes it difficult to see your stitches; personally, I think eyelash yarn is the worst. You might be able to make a chain or a stitch, but working back into it can be a pain. While I was working on my not-a-surprise-anymore project, I decided to put a tutorial together to make this yarn easier for those who have trouble. This "tutorial" might be more of a warning than a lesson.


There's plenty of other complaining we could do about many "fuzzy" yarns: They shed, most need special laundering, and usually, they're not cheap. I refuse to pay full price for these headaches. My very first ball of Boa yarn was bought from a clearance aisle, just like every ball since. At first, I hated it. I thought I would never buy it again. Then, I found a bunch of half-unraveled balls with missing labels for 99 cents a piece, and I caved. After another project left me covered in synthetic fur, I swore I would never buy it again. And then I found a box full that wasn't so unraveled, and most of them still had the labels. Yup, I bought those, too. 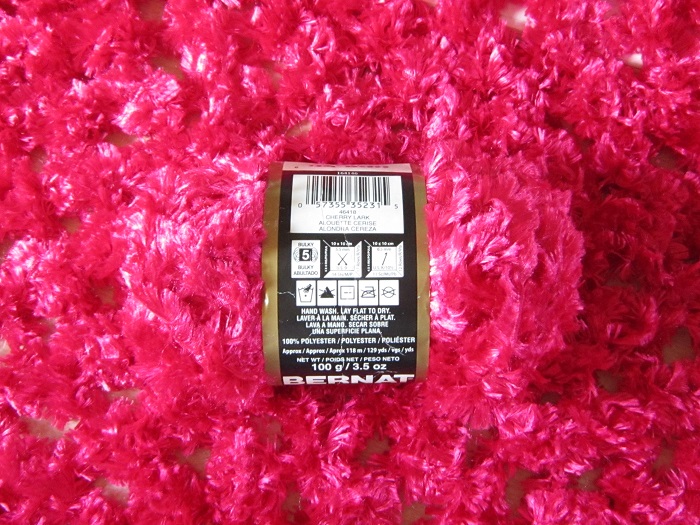 So if you have this yarn (or something like it) and you have trouble with it, maybe you'll find some help here. If you've never tried furry novelty yarn, then here's your example of what you will face. It's far from effortless. I'm not going to even suggest that it will be easy. But after some practice and a little wasted yarn, you might find that the results are worth the fight. When it's worked up in a project, the shedding stops. And once you get used to finding your stitches, you'll feel like you have super powers.


I'll be making a double-crochet-three-together (dc3tog) stitch, also sometimes called the cluster stitch. If you're looking to learn the dc3tog for the first time, then I suggest using this tutorial instead. The furriness of the novelty yarn won't make this an easy lesson.


In all seriousness, this is going to be a sarcastic, complain-y tutorial for those who are fighting the fur, not a how-to-make-this-stitch for beginners. Also (wow, holy cow, here's some encouragement), remember that the examples are from my own experiences. It took me a few patterns to get comfortable with this yarn. It might take you more. You may never get comfortable with it; you might hate it and refuse to work with it ever again. And I totally understand that. If you've never had any trouble with this yarn, either you have magical powers or you haven't worked with it yet. 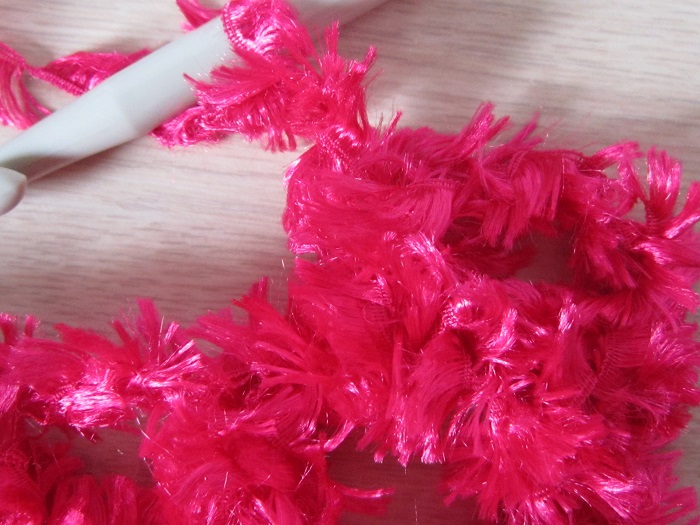 So, here we go: What you see above is the completed dc3tog stitch. Note how you can't really see the individual posts at the base of the stitch. If you lose track in the middle of the stitch, it's difficult to tell at first sight how many steps you've completed. There's a chain-1 in between the stitches, and one chain on the hook. Being able to make the stitch into a chain space instead of an actual stitch makes this yarn so much easier to work with. 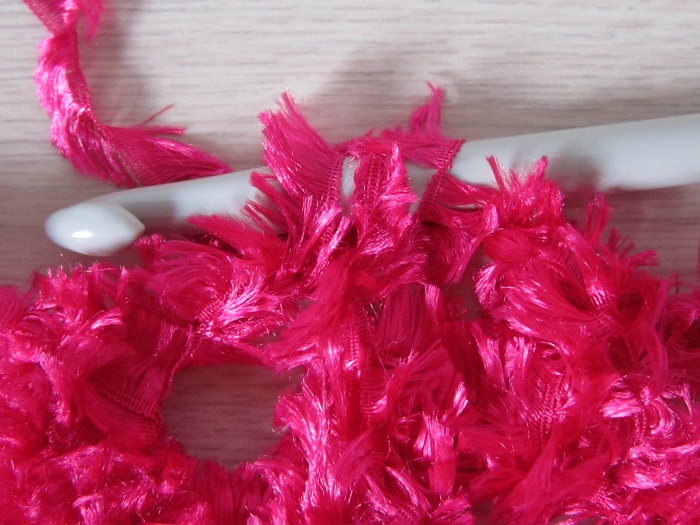 So, to make the dc3tog, we yarn over and pull up a loop. A fuzzy loop that will want to cover the loops next to it. I cheated here for the first picture by sliding the yarn back and forth to spread it out on the hook. I won't do that in some of the other photos, and you'll see the difference. But, you know... Hint, hint. If you can't see how many loops you have on your hook, work it around. The loops will become more visible, and you might start getting used to the feel of the stitch; count with your fingers and not with your eyes. 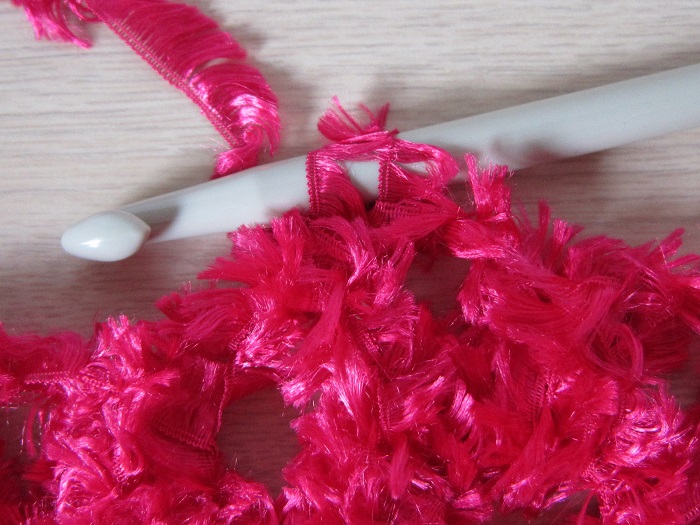 (In case you don't know, here's where you yarn over and pull through two loops.) I can't really help you with a hint for pulling through the stitches, other than to stick with the same advice as before. If you can't see it, you're just going to have to learn how to feel it. To avoid having trouble with the number of loops to pull through, I keep my index finger on the loop(s) that will remain on the hook. 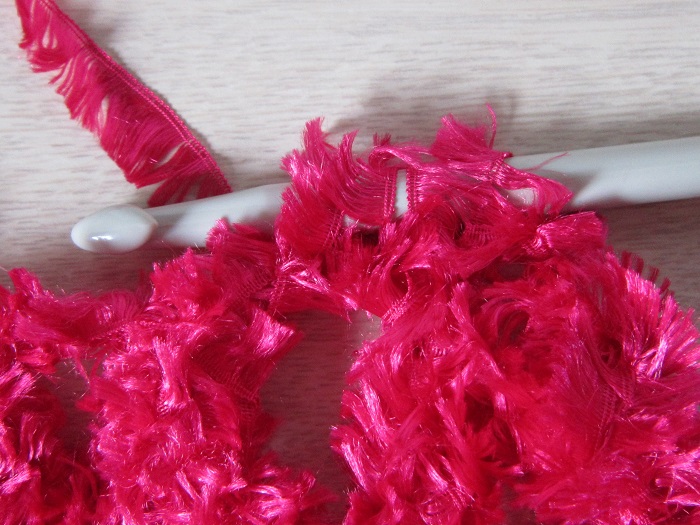 Now we yarn over and pull up another loop for the second half-closed double crochet of the stitch. Here you can see a better example of how the loops will really look on your hook. The fur twists and turns any which way it wants to, looking much like my hairdo when I roll out of bed in the morning. You know, except for that color... I would do something cooler like purple with black streaks or something. Anyways... 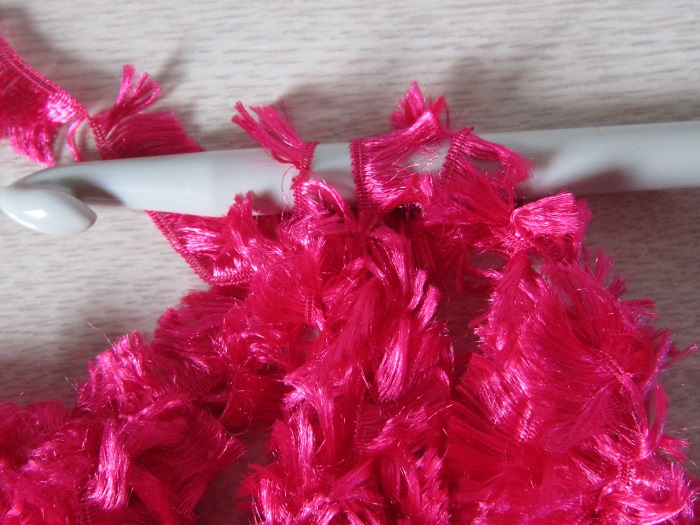 I didn't mess with this one: After yarn-ing over and pulling through another two loops, I hit a thin spot in the fluff. Do a little happy dance when you get one. 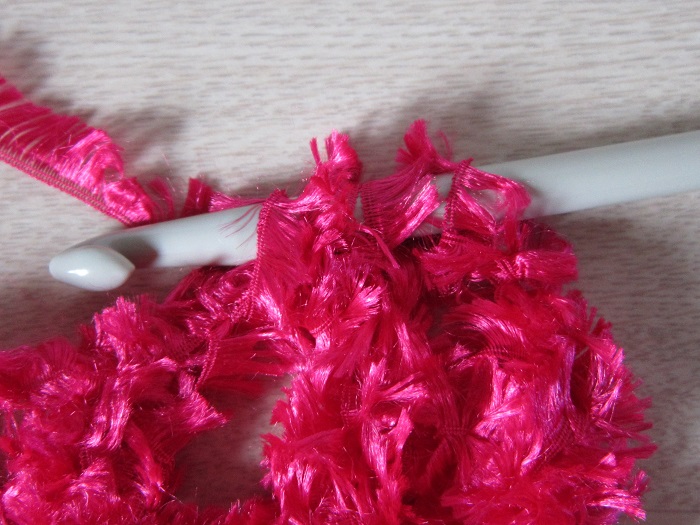 And now we yarn over and pull up the loop of the third half-closed double crochet. So much for that thin spot... The fluff monster ate my stitch again. 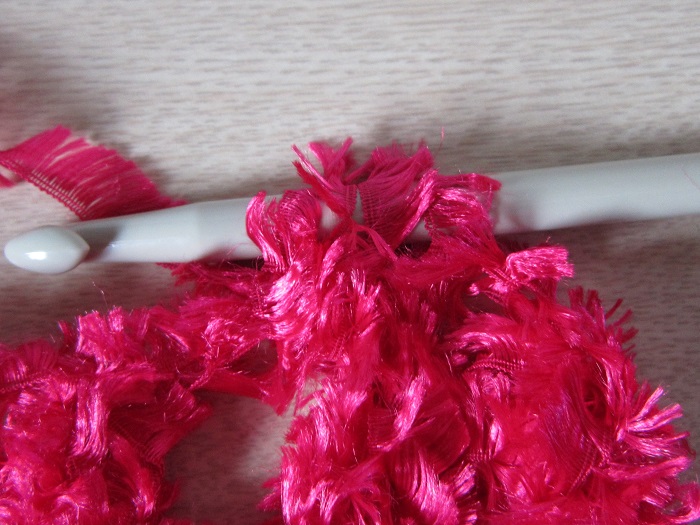 This should be another "yarn over and pull through two", but it kinda looks like it's the same step as the last one. It should be the last step before pulling through all four loops on the hook. I got distracted while editing the photos, and now even I'm not sure what this is. I think I accidentally deleted the second-to-last step. 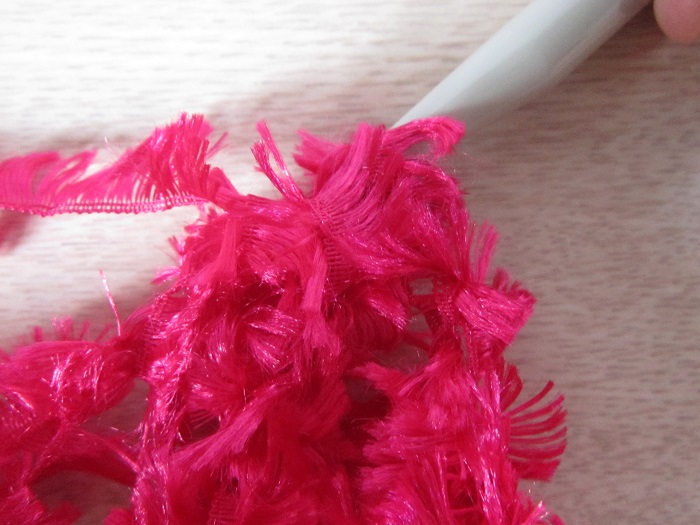 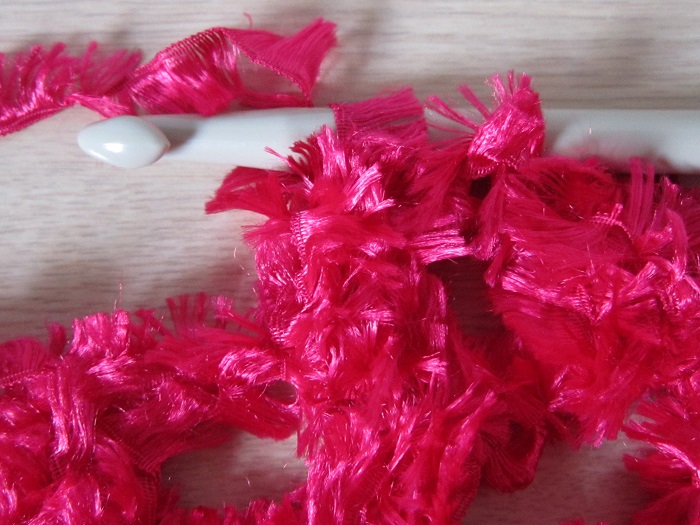 Sometimes, you just don't know until you're done with it. Or, until the hook gets caught on a loop inside the stitch because you're trying to take a picture (or just because), and you can't see which way you need to rotate it to fix it, so you wiggle it back and forth, but... Oops! That was the wrong way to wiggle it. Now all the loops of silky furry fluffiness slide right off the hook and the weight of the yarn pulls the entire stitch out, so that you can't even pick it up mid-stitch. Try again. 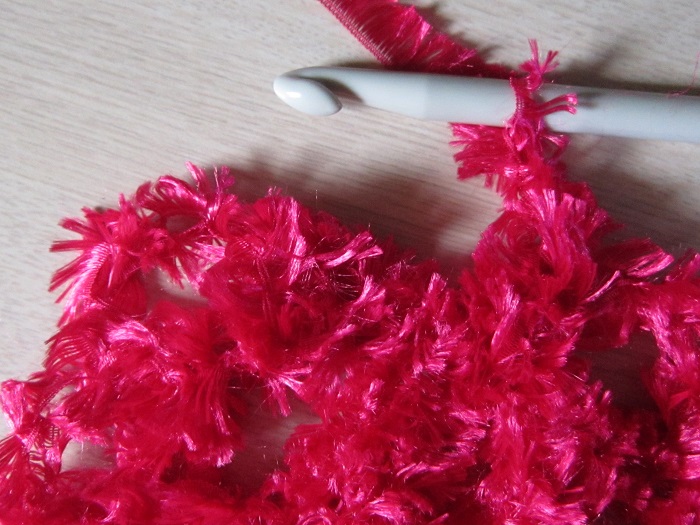 Sometimes, you might come across a spot that makes you think you forgot to make a chain almost a whole round ago, and you start to cuss as you think you're going to have to rip it all out, inevitably ending with being covered in more synthetic fur. Before you go crazy and start that ripping, double-check your work. Here it looks like I forgot to make that chain, but after closer examination, it's just an extra-fluffy spot in the yarn that's filling in the hole. It's a good thing the kids weren't here and the cats and dog can't repeat some of the words I said when I thought I'd have to frog it. 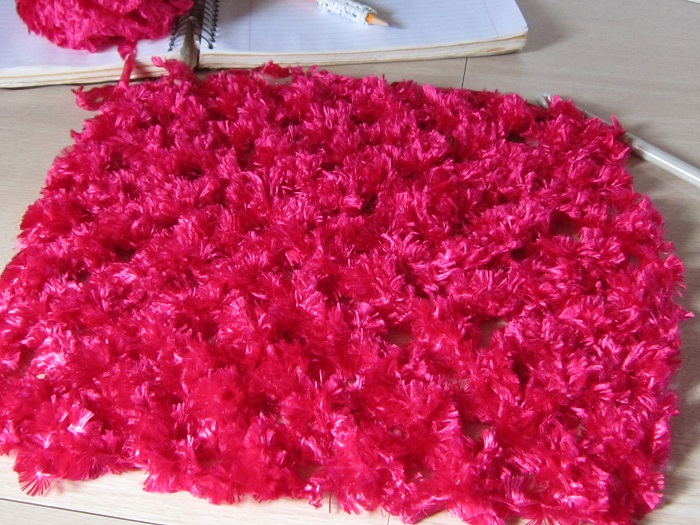 This is a yarn that makes you slow down and pay attention to what you're doing. As I said before, the result is worth the fight is you're willing to make the effort. I saw some throws kind of like this in an outlet store, on clearance for $40 - Original price, $75. By the time I get done with this, I think I'll have three, possibly four balls of yarn in it - And I only paid $1.50 a piece for them. Add to that the extra-fluffiness of the crocheted version... I think the ones in the store were just woven. This one is twice as thick. Plus, I get to brag that I can crochet with Boa like a boss.