On International Crochet Day (Sept. 12th), I vowed to finish July's Scarf of the Month... And I didn't. Ugh! So let me complain a little bit (just a little?), then we'll get on to my solution.

The biggest problem with finishing this scarf has been a cat. Plain and simple. A dumb cat. And before you think I'm being mean by calling Jump Steady "dumb", let's cover how he goes to sleep while sitting up, then falls over. Before you think I'm a horrible pet owner for insulting my cat's intelligence, you should know that he walks straight into walls. Please understand that I base the description of "dumb" on behavior such as turning the opposite direction every time I call him. And before you think he might deserve some kinder words, you should try to crochet something with this cat around. He is... *Sigh*... Difficult. Cats often get into yarn - that's no secret. But this cat usually stays out of the stash. That's good. What's bad is: He likes WIP's (works in progress) more. Especially July's WIP that consists of a bunch of chain stitch rings. Jump knows he's not allowed on the table, but somehow, every time I walk away, the pieces mysteriously end up on the floor... And under the fridge, under the stove, under the couch, under my chair... You get the point. This scarf will be so awesome because it takes very little yarn to make, plus there's a big time-saving method involved. But I'm making more rings because the cat stole a few that I can't find, so it's costing me extra yarn. I'm also taking more time than I should, because of a DUMB cat. 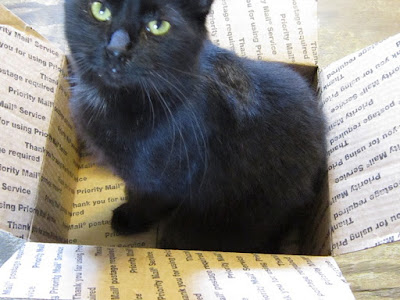 I came up with a short-term solution that didn't really work in the end. The rings fit perfectly like bangle bracelets, so I started keeping track of my finished pieces by wearing them: 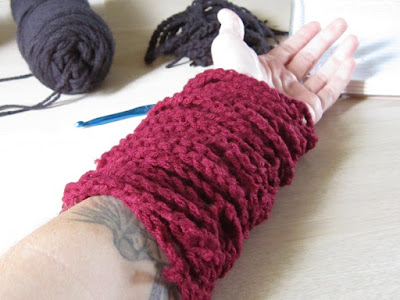 That wasn't a great idea. I'm not going outside to walk the dog while wearing these, and they don't need to go everywhere with me. That only leaves them on the table for the cat to get to again.

Solution: Pick up the WIP, of course! But, come on! How many of you are gonna pick up your whole project and store it away, just so you can answer the phone or go pee, or something mundane that shouldn't really require the removal of the entire WIP? We all know putting it away will solve the issue, but I don't think about it when I'm only running to the closet to get a roll of paper towels to clean up a mess... That the cat made. Probably on purpose, so I'd go get paper towels, and he can swipe a few rings into that hairball he left me. Eww. The trash can have those.

I thought - in that silly cat owner way - I thought that picking them up in any way would stop him from wanting them. I tried to make use of a small flower vase that somehow remains on my table, despite a lack of flowers: 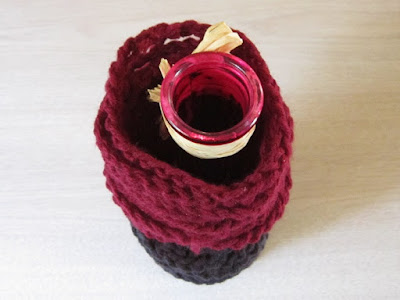 It seemed like a great idea, until: Crash! No broken glass, at least. Just a crash, and a cat running away. 'Cause he didn't do it, right? This idea is getting scrapped before my vase gets shattered. I should put it in a box already, and stop this fight. But that means I have to dig through the box every time I need a piece or a tool in it, plus I'll have the box sitting in the way.

The "less-work" solution: Don't put it in a box, put a box over it! Oh, what a genius I am! All I have to do is place this cardboard box upside-down over my WIP when I walk away, and no more... 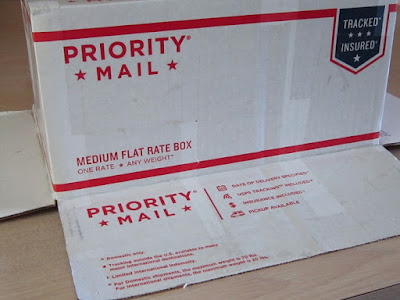 What was that thumping noise? 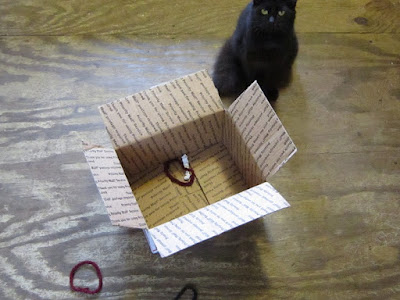 He says he didn't do it. Maybe he was set up. Maybe I'm wrong. I still think he did it, don't you? 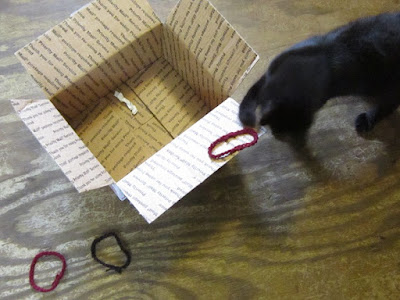 Okay, so I guess I forgot the part about cats liking boxes, too. Game over. I give up. I'm moving this WIP into the bedroom, where he's not allowed at all. It's sad to ban him, I know, but he doesn't behave. Besides WIP theft, another favorite game of his is 'slap the human in the face while sleeping'. When that game gets boring, 'bite the human's nose' becomes more fun. And then there's the ultimately entertaining game of  'drop every sock you can find into the toilet'. This cat is a problem that I'm always running away from, and constantly cleaning up after. If I have to move my WIP into his banned area to finish it, then I guess that's what I'll have to do.

Will this solution solve problem number two? Nothing - NOTHING can destroy your joy over a great project like somebody else's negative opinion of it. Enter into the situation: The Other Half. He comes in handy once in a while with good ideas and a helping hand with tangles, but he has no filter. Seeing the pile of sloppy-looking rings on the table, I could understand his doubt about it becoming a scarf. Once assembly started, I caught him looking at it. Looking at it with a strange expression on his face.

"But what about the middle?" he asks.

"The middle comes together once I continue with the border. The whole thing will be woven together, and the border will help thicken it up."

"But what about the middle?"

*Sigh* "I just explained that."


I really hate it when he does this to me. I see it in my head. I know what it will look like. It will be awesomeness. But now I'm hating my design, and I've ripped it all out. I spent more time deciding how I want to join the pieces together, to make it better than "weird". And the whole thing is holding back August's Scarf of the Month pattern, which is already finished. What do I do?

How about: Start over.  Not with the design, just go back to the assembly. Forget what he said. He just can't see it. Make a tutorial. Make a video! Show everybody else this scarf's awesomeness, and let his opinion slide. To make myself feel better, I'll let you guys in on a secret about the pattern: If you think all those rings are a bunch of ends to weave in, you're wrong! Since I hate weaving in ends, I designed this scarf so that you can tie a big ugly knot in the tails of the rings. Yay for big ugly knots! That might be part of what's throwing his vision of the project off, because at this point there's still a bunch of big ugly knots showing. Forget what he said. Just stick to the plan. 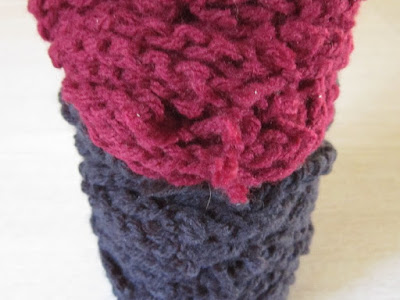 Do you have people in your life that destroy your confidence without meaning to? Or do you have an insane cat that ruins everything? How do you get your crocheting done around them? Due to the flood water (and it's still raining!), throwing the cat out isn't an option. Throwing the Other Half out could be (lol). What would you do? 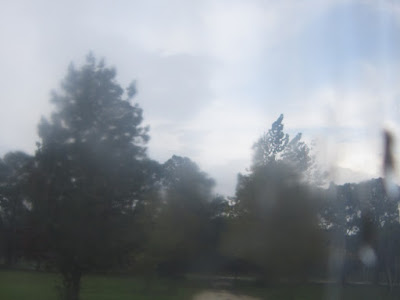