Saving the Yarn:
Getting through it (and a little rant)

Last week, Yarn Tales Tuesday left off where I made the first cut in the yarn. Over the shock of the damage done to this skein, I'm ready to get through this now. The coffee pot's up and running again, and the heavy metal's still contributing to my hearing loss. Now, let's see how much progress I can make with this mess:

After the finding another hidden knot inside the skein last week, I made the decision to use the scissors on it. It caused a small amount of emotional trauma and some sympathy pains, but in the end, it's what needed to be done. With some frenzied picking, pulling, untying and unraveling, I was able to find an available end to begin another ball. 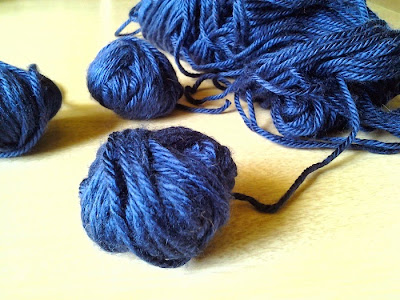 This is where we get to say "Yay!" Get over the hesitation, cut those bad parts out, and keep moving. Progress is good! I won't bore you with a ton of step by step photos. Instead, just know that I had the same problem throughout the skein. just when I get moving, I run into another impossible knot. But, no more procrastinating! Just cut, find another end, and get going again. It makes it so much easier to create a new end to pull through a knot, rather than trying to find where the end of the current one comes from.


I was lucky enough to work through even parts of the yarn, so each ball is close to the same size. And the closer I got to the end of the skein, the less knots I found! It looked like I could make a little change in my plans: Taking a chance, I tried to keep unraveling to the end of the skein, without making any more cuts. I ran into a bunch of loops, but no tight knots to deal with. It was all going easy as pie...

(By the way, who invented that saying? Have you ever made pie from scratch? It takes time, practice, and it gets messy. Pie isn't that easy unless you pick one up from the bakery!) 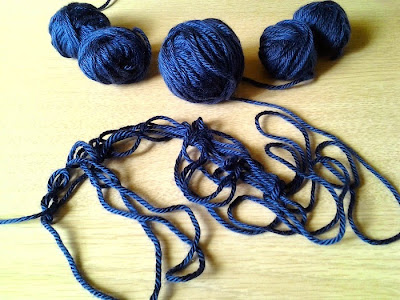 Anyways, ugh...Why did I change my mind? I was seeing progress. I was feeling successful. Did I say "Ugh"? That's also code-word for more four-letter words! I was hoping to turn the rest of the skein into one large ball, which would give me more options for projects. Now, I'm starting to think that the "yarn gods" have placed a curse on me.


More. Knots. Ugh! You know what? Four-letter word it. I'm not fighting with it any more. Shall I get those scissors back out? 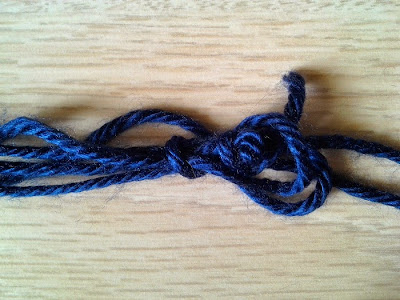 The answer is yes. But first, I'm going to get another cup of coffee. Then, I think I'll switch over to a "girl band" for the heavy metal of the day...Alright, get ready for that "little" rant:

-Okay, I get it, probably almost none of you want to listen to my taste in music. Most people don't. But, you don't have to click on the link if you don't want to. I just like to share what I'm doing while I work. People often comment to me that it's unusual to listen to heavy metal and play with yarn for a living. Why? Why is it any different than someone who listens to country, classical, pop, rock, or rap music while they work? It's just my choice. Just like your choice of music is your choice, and it doesn't affect your job, does it?

So, because of my mini-lecture there, let's go with that "girl band" for the day. Because I'm tired of people thinking you can't mix this with that. Talent is talent. And any kind of person, with any kind of preferences can have any kind of talent. What I'm listening to today is a band called Straight Line Stitch (video will play), and the lead singer is "different" than what you usually find in heavy metal. And that's good. But, if you check out the comments on their videos, you'll often find criticism about her gender and race. And that's bad.

-But, before I sound like I'm accusing any of my readers of wrongdoings, let me say that all of you have been the most accepting people I've ever "known". It's the people in my personal life that have made the comments about my "odd" choices. And they're the people that don't care about my crochet work, so they'll probably never even read this. So thank you, to those that do enjoy it, and either accept me as "quirky" or at least choose to click that little red "X" and withhold any negative comments.

Anyways, I've got knots to tackle, coffee to drink, and a new free pattern to work on. And heavy metal to listen to. Maybe I'll have this skein unraveled by next week. Until then,

P.S. From time to time, I also listen to things like Beethoven and Peter Cetera. Because I enjoy it. But shh..Don't tell anybody. Somebody else might think I'm weird.