Saving the Yarn:
The next step

Last week, we left off where I was debating whether to cut this skein of yarn to save myself some hassle. This week, let's see how far I've gotten with it:


The final decision was to break out the scissors. I don't like it, but it's what I have to do before I loose my mind over $5 of acrylic yarn. In the end, I figured it just wasn't worth the frustration. Having already weighed my options and reconsidering the project this skein was designated for, I'm now prepared to start severing the knots that have kept me tied down. Well, almost. I imagine I can hear the yarn crying, "Don't cut me! Please untangle me!" and I feel bad about it. Then, realizing yarn can't talk, I regained my sanity and formed a plan.


Why plan ahead before cutting the yarn? I feel I owe it to this skein, since it was my lack of thought that caused its injury. I thought it would be smart to use some forethought this time, and at least make a goal to get equal parts out of the skein. I know it won't be perfect, but I'm going to stick it out and try my hardest. 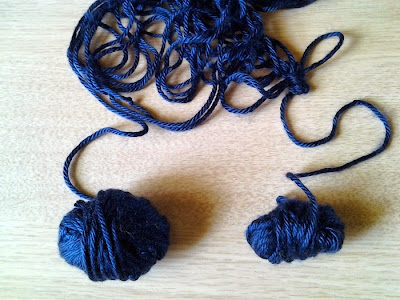 At the time that I took this picture, I had two sections partially untangled. One side was a bit under 1 oz (28 g), and the other was about half its size. I had a terribly tight knot to fight with, and considered just cutting it already. Just as I was about to snip, I realized where the problem was. Two loops in the knot were tightened together, with another loop tangled around both of them. Then, the whole mass of a knot twisted a few times, and flipped around the yarn coming from the skein. Seeing the correct route to take, I untied the mess in a few minutes with a sigh of relief.


Remember last week, when I was hoping for the "yarn gods" to bless me with the power to save this skein? I thought my "prayer" was answered at last. After days of fighting and cussing while still determined to keep this yarn in one piece, I had finally made some progress! I thought I should put the scissors away. I thought I could begin to roll it into a beautiful, organized ball of potential project. I thought I would be able to relax with my coffee for a few minutes during a break. I thought the stereo would get a break from blasting heavy metal in anger, and I could go back to more quietly blasting heavy metal for fun. I thought wrong.


I'll spare you the next few minutes of the story that involve R-rated language and scenes of violence. Let's just say this: There's a knot somewhere inside the skein, and I can't pull it out. If I pull one way, the yarn just won't budge. If I pull the other way, the whole skein starts to turn inside out. After letting it invert a bit, thinking I could find the knot, the second side quit moving, too. It's like there's an invisible troll living inside this skein, grabbing whatever tail you try to unravel, and tying it into a new knot again.


Okay, it's time to accept defeat. But, at least I was able to get both ends untangled to about the same length. Get the scissors. Ready? Hold your breath and... 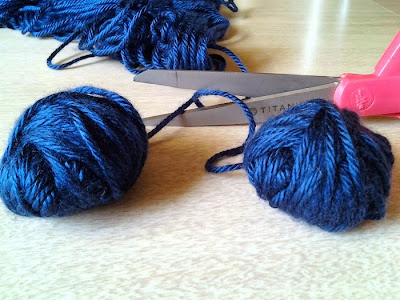 Cut! Ooo, ow, oh, that hurt! I think I can hear my yarn whimpering! Shh...It'll be okay, yarn...We'll still turn you into a good project, I promise!

And now it's time to start again: 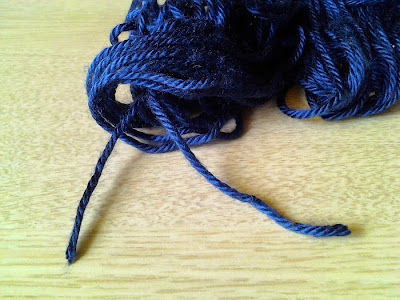 Where? I don't know. I'm a little lost right now, but I'm sure I'll figure it out. For now, the drink of the day is herbal mint tea. (Screech! Hit the brakes!) What, no coffee? I'm feeling a bit down, the weather's been bad, and I just don't have the heart for my caffeinated friend today. But don't think I won't put some rum in that tea to give it a kick! I'm confident that the coffee maker will be up and running again tomorrow, and hopefully so will I. Until then, let's tone the heavy metal down a bit with a song of the day by Taproot (video will play), and look forward to brighter skies and less knots.