Saving the Yarn:
The culprits

This week's subject will need a continuation. I just can't deal with it all at one time. Some of you will understand. A few of you will think I'm nuts and tell me to throw it out. Many of you have been in the same situation.

Let me begin this endeavor with a quick comment: I love my kids. And I love my pets. But sometimes...Ugh. Sometimes as a parent (and pet owner), you have that moment where you envision Homer shaking Bart Simpson by the neck as he says "Why you little...!" But you take a deep breath, count to ten, take another deep breath and count to one hundred as steam rolls out of your ears, and then...Then you fix it. Whatever it is.

My it is the subject of the following weeks. It started with one simple question: "Mom, do you have some blue yarn I can use?"

"Sure, I have blue yarn! Do you want royal blue, powder blue, blue blue, or teal blue?" (Gesturing to acrylic craft yarn...)

"I want that one" (points to the skein of more costly Navy acrylic that I'm about to start a project with).

"Well, I'm going to use that one to make you a new hat. Can you use a different color?"

"I only need a little to tow my truck with. Please?"

And that's where I made the biggest mistake with my yarn. "Sure, buddy, how long do you need it to be?" After being told he needed to measure, and I was busy at the time, I let him walk off with a skein, trusting it would come back only a little shorter. You can guess what happened, right?

This is what happened. Here is my new free time. I still get to sit down with my coffee and some heavy metal, but it will include knots and four-letter words until this is done. Let me explain what you might not understand from the picture: The parts that are rolled up are both ends of the skein, coming out of the same end of the skein. After looping around the entire length of the skein, one end goes back inside the center, and comes out the other side. Then somehow, it meets the other end of the skein again. And...they're tied in a knot. Again. 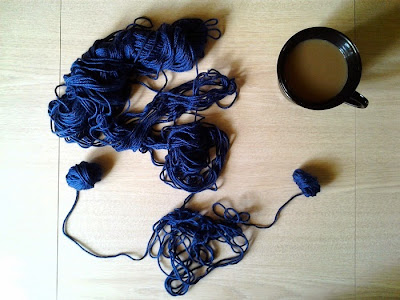 The first knot is in the center of the looser tangle, closest to the rolled parts. Then both of the tail ends of that run through a mass of loops a few times. And as I traced the ends past where they are looped around, I discovered the second knot. I may have made it even worse when I tried to pull extra slack from the center of the skein. That's when I found out that the ends also pass through the middle of the skein sideways, as if my boy was using the skein as an embroidery canvas.

Ugh. Time for more four letter words, and maybe time for scissors. I just can't take it anymore, but I refuse to throw away yarn that can be saved. You remember seeing the little good guy/bad guys on a character's shoulders in cartoons? I have a set of them with me now. The bad one with the pointy little beard is whispering in my ear "It's a five-dollar skein of acrylic...Throw it away! Just throw it away!". And the good guy in the white dress is yelling "NOOO! No! Don't throw the yarn away! You can save it! You have to save it! You will save it!". 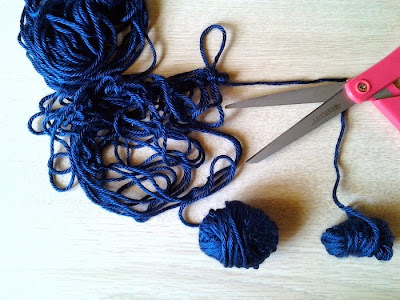 Maybe I watched too many cartoons as a kid...

In my head, the good guy jumps over to the other shoulder, takes the bad guy's pitchfork, and shoves it up his...ahem...anyways... So, I'm putting it down, for now. I don't want to throw it away. I just can't deal with it all at one time. Just when I think I made it past a knot, I find a new one. And just when things are going well with the untangling process, I lose my grip on the ball I'm working with, sending it rolling across the room for a cat to catch. Can somebody remind me why I have a sensitive, caring side? 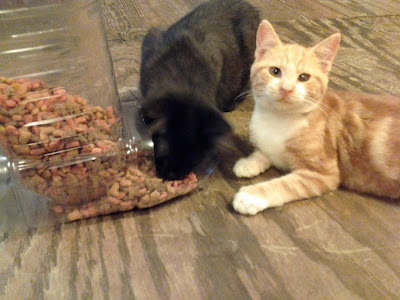 Oh, that's right, cute little pets! I forgot the part about my furry little "friends"! Sometimes it seems like my design ideas come to a halt because of pets. I had an awesome idea for salvaging this yarn. I'm pretty sure some cutting will happen, so...Granny squares. Yay, a new afghan! It will look so nice on my couch! Oh, wait...never mind cats' claws in the project that took me three months to finish, I have a bad dog, too. 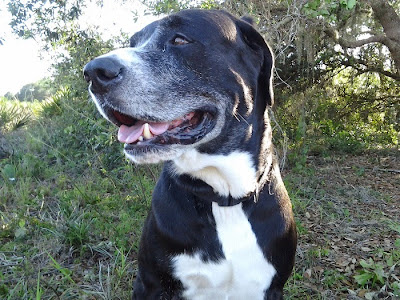 Tater Salad weighs about 120 pounds and slobbers everywhere. He knows he's not allowed on my couch. After repeatedly finding fur on the couch in the morning, I started pushing the coffee table against it before I went to bed. Ha! Now get on the couch, bad dog!

Right. So, after repeatedly finding fur on the couch even after I blocked it off with the table, I set up a motion-sensor night vision camera. This first picture was taken 20 minutes after I went to bed: 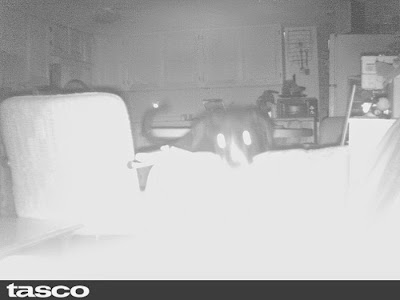 I swear he's looking right at the camera, thinking "Like that's gonna stop me". And, here he is, nice and comfy, after going right across my coffee table to get to the couch: 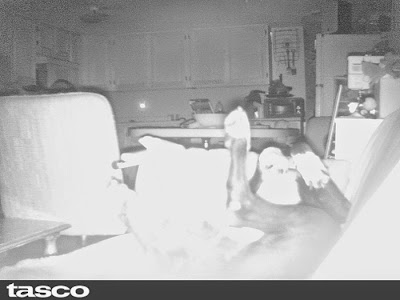 With his head on the pillow and everything. Ugh. And for the grand finale: 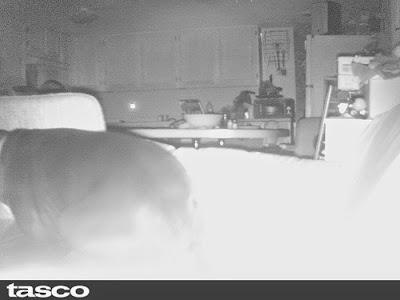 That would be him going across my table again, to get off the couch. Time stamp on photo - exactly the same time my alarm clock started going off. Did I mention he knows he's not allowed on the furniture? The next picture in the group was of me coming out to start the coffee. And when I did, he was on his bed, where he's supposed to be, looking as innocent as the boy who said "I put your yarn back for you, Mom". Thanks.

Have your attempts with yarn ever been thwarted by the loved ones in your life? Maybe they don't appreciate yarn or the final product the way us yarn lovers do. Maybe the big, smelly dog just wants a nice afghan to cuddle with, and he just doesn't understand why he can't have it. Maybe the kid doesn't really want a new hat.

And maybe, just maybe, the "yarn gods" will bless me with the power to untangle this skein. Until then, the drink of the day is coffee (as always), the band of the day is Mushroomhead (video will play), and I see the use of scissors in my near future.