Make some napkin rings that will make an elegant addition to your fall table. With subtle beading and an eye-catching crossover, your guests might think these came from an expensive designer collection. The truth is, they only cost pennies a piece to create. Simple and quick to work up, you can customize yours with your own choice of beads or color.


The pattern uses single crochet, slip stitches and chains. The crossover looks complicated, but don't worry, it's simple! The finished piece has an inner circumference of 4" (10 cm) and is 2" (5 cm) tall at the back. Where the crossover is at the front, the height is 1 1/2" (3.8 cm).

Be sure to check out the revised version of this pattern here!

If you prefer the original pattern, here's a step by step tutorial that may help. 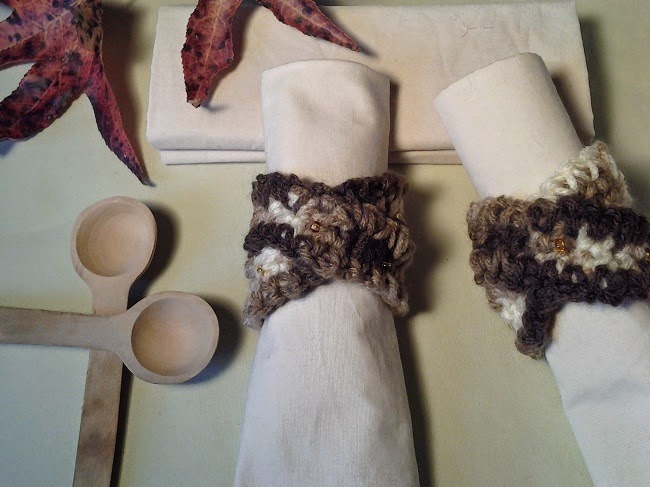 Materials:
Worsted weight (4) acrylic yarn
- I used Red Heart Super Saver in "SH Browns". After looking on their website, it appears to be discontinued. Worsted cotton is interchangeable, just check your gauge.
Hook size I/9-5.50MM or size needed to obtain gauge
Yarn needle or smaller hook to weave in ends
Beads - 5 per piece

Notes:
To use small beads on worsted weight yarn, use a drop of glue on the tail of the yarn. Twist tightly and allow to dry. Thread beads.

Thread your beads on the yarn before you begin. Use 5 beads for each piece you wish to make.

Work across strip again:
Sl st in each of the 3 sts.

Joining:
Bring strip around to bottom end of pattern. Cross over so current st meets end st of bottom. 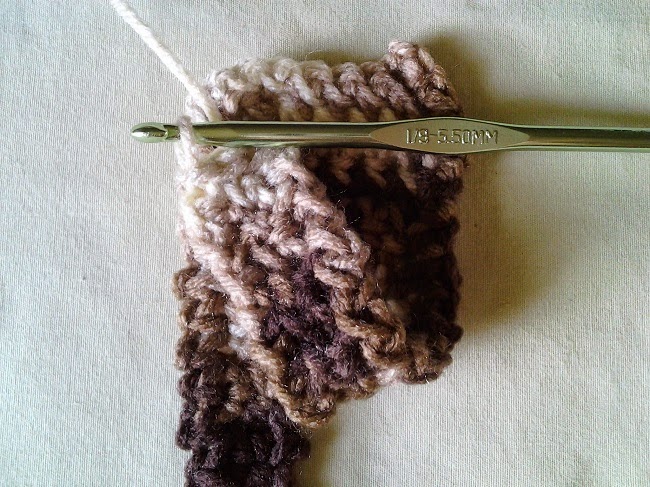 
Turn to work down strip. Ch 1, sl st in each of next 8 side post sps. Find middle bead of other strip. Sl st in the ch-1 sp at the edge of this row. 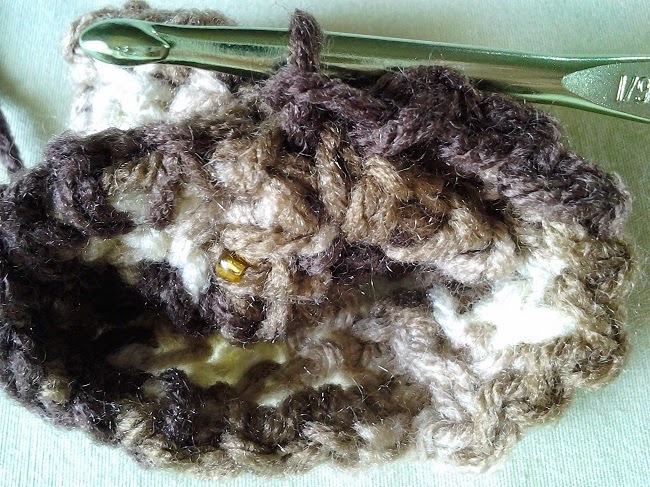 Bind off, weave in ends.

Turn right side out.


*I though these would look better starched, but it left residue on the beads. You can wipe the starch off of the beads, but it takes a lot of time. I also tried to harden them with craft glue, but had the same result. In hindsight, maybe they're better left alone. Please leave a comment if you have a solution for this problem.

Crochet for our Furry Friends

The days are getting shorter, and so is my time frame for finishing projects. My work days get more hectic during the winter months, because I don't have as much natural light for taking photos. Combine that with getting the plants and animals taken care of before the sun goes down, plus the upcoming holidays, this time of year just gets busy!

Speaking of taking care of animals, I must be crazy. I've got something new eating up more of my time: 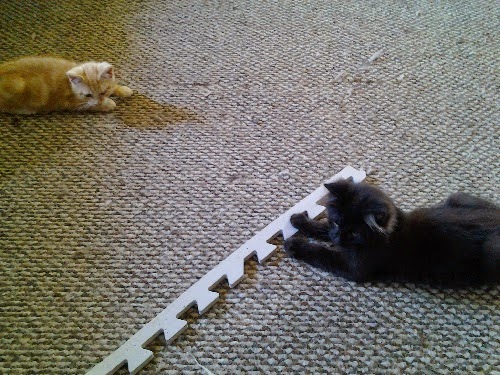 So, I'm a sucker for a cute kitten. I rescue various cats from time to time because my neighborhood is overrun with them. They always manage to show up at my door. There's a great vet in my town that will spay and neuter them for whatever you can donate. These new little guys are the latest rejects I've taken on.

I always hope to adopt them out, because I already have these two ladies: 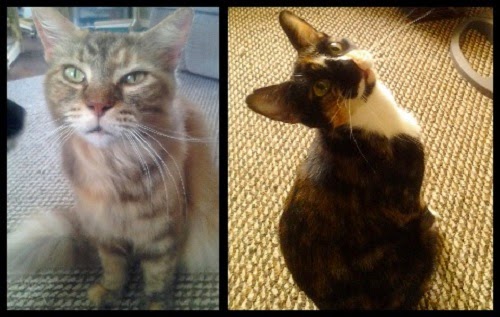 I don't want a house full of cats, and I already have a group living outside keeping the mouse population down around our acres. However, I think I'm stuck with both of my new charges. My adorable little buddy Gilligan here is blind in his left eye: 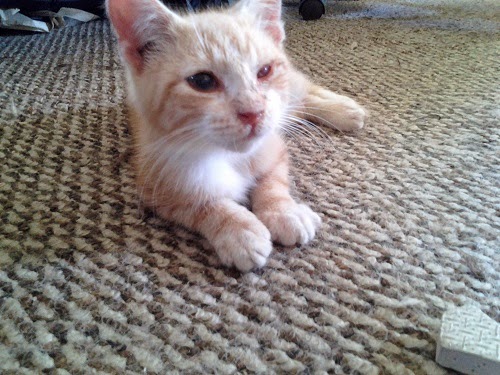 He had an infection when he was born and the eye didn't recover. It looks pretty gross, so nobody wants him. Sad.

And then I have this little firecracker: 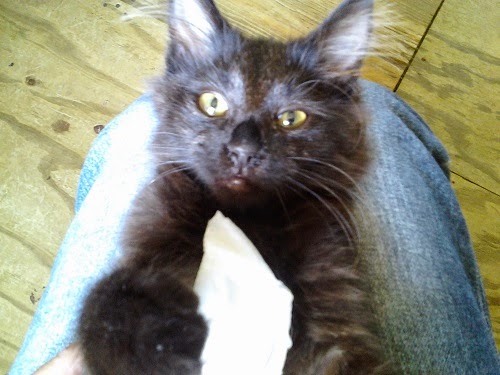 There's nothing wrong with Jump Steady, except for his attitude. He doesn't make a good house pet for a family with kids, or an elderly person, or anyone who likes their ankles intact. He attacks anything that moves, and he likes to try to claw your eyeballs out. If you let him outside, his favorite game is "see how high we can get in the tree". Hopefully I can calm him down and eventually find him a home.

So, it's not really fun to work with yarn all day in a house with two kittens. It's cute at first when they start to play, but when they unravel half of your project, or in Jump Steady's case, end up hanging by their claws from your leg after chasing a yarn tail, it gets old quick. Distracting them with toys usually works for a while.

I realized I haven't crocheted any toys for my furry friends lately. The oldest cat has always been too cool to play with anything at all, so she doesn't really care. But I used to work up quick plarn rings for my calico, because she would play fetch with them like a dog. When Cornelius Peanutbutterus decided she didn't like that game anymore, I stopped making them.

I've never crocheted anything for my dog. He doesn't play fetch, he plays "take and destroy". I always wanted to design a doggy sweater for him, because I've never found a pattern for one that fits a dog this big. But...

Have you ever seen those super-tough dog toys sold in stores? You know, the ones that advertise a lifetime warranty, impossible to destroy? The ones with $25 and up price tags? 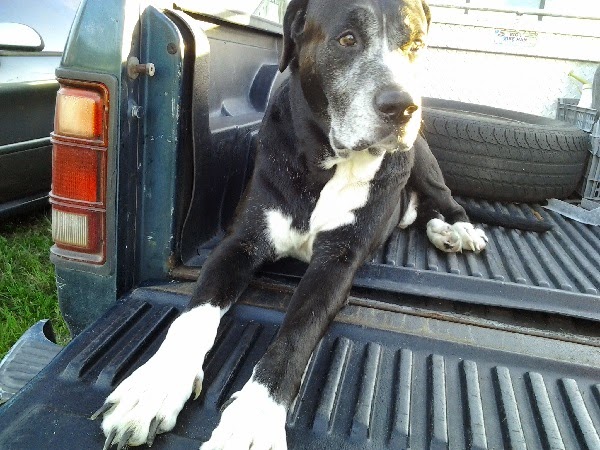 Tater Salad eats them in 20 minutes. I've never thought it would be safe to give him a crocheted item. I have premonitions of choking and intestinal compaction at the thought. It would surely be wasted work, at least. He crushed a doorknob once, and damaged another. Have you ever had to replace a doorknob and locks because of a dog?

He destroyed an entire wall...twice. After the first time, we bought new drywall and insulation, rebuilt the wall, and had it taped and spackled, ready for paint. A WHOLE WALL, from floor to ceiling. We replaced over two sheets of drywall, plus had to buy the rest of the supplies to repair it. At least we hadn't painted it yet before he tore it up again. A crocheted sweater, lovey or toy could be a great gift for a smaller, well behaved dog. But I don't have one of those.

He just gets plain old T-shirts cut up and tied into a sweater. 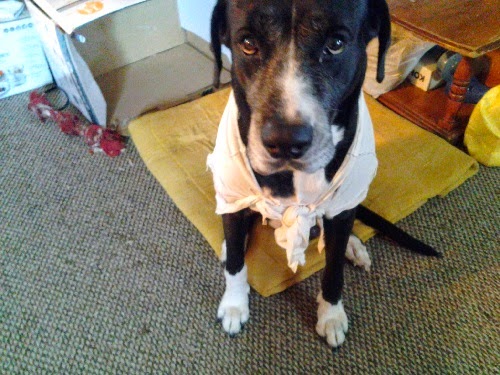 He manages to shred them in 20 minutes, too. Maybe he just doesn't want a sweater. I guess he doesn't like walls or doorknobs, either.

Seriously, though, he's a pretty well behaved dog, until I leave him alone.

That's what's important to remember when creating crocheted items for animals. A cute little crocheted mouse makes a great toy for a kitten, but the owner needs to be responsible when providing such toys to our furry friends. Ends can come loose, animals can chew through fabric, and material and stuffing might be consumed.

If you create items for animals, remember:


Finally, remember to warn the pet owner of these hazards if the toy you create is not for your own. You might be friends with your friends' pets, but you might not know of that animal's destruction level behind closed doors. Some pets seem well behaved, but they'll do odd things like eat your hair while you sleep. Make it clear to the pet owner that this should be an interactive toy for pet and owner to play with together, and the toy should be removed when the pet is not supervised. Outfits and accessories should also be removed from the pet when the owner is not present.

I feel a bit guilty now that I realize I've been forgetting my furry friends while creating crochet projects. I'm planning on devoting some of my time to designing some pet-friendly patterns and perhaps making some extra to donate to the local overpopulated shelter. The temperatures are dropping, and many homeless pets could use a warm blanket or bed. It's just so hard to go the the shelter to drop something off, and not come back with something cute and furry... 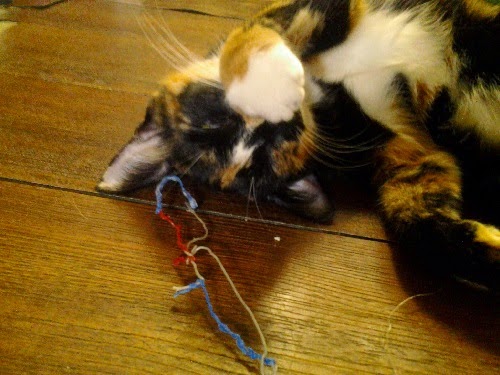