(A quick side note about the faux-fur hooded cowl that inspired this project - The post for how to finish the hood is on hold until I get the fitting checked, which requires a baby. Of course I don't have one of those things and it's proving difficult to borrow the one that the cowl was made for...)

And now on to my latest trend: Slippers! While working on my last project, the thought hit me that the shaping of a hood could also be used to create the heel of a sock. Although I was sort of right, I'm not happy with the look of the results. I'd like to show you how I made them anyway, because looks aren't always everything and these sure are some comfy-fitting slippers! Follow along and you'll soon understand why I'm calling this post "SlipperMania"... 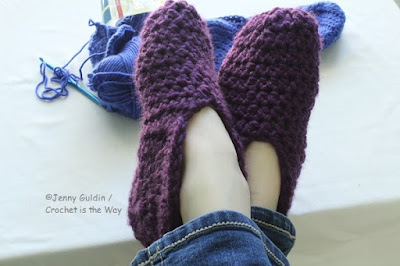 I made that first pair of slippers with bulky-weight Charisma yarn, thinking they would be perfectly warm and toasty for the upcoming cold snap. There's three things I didn't like about them:
1) Bulky weight slippers might be too warm. My feet are perpetual blocks of ice, but five minutes in these slippers had them melting into... Well... Sweaty feet. Yuck.
2) The design was made in a slightly different way than what you'll see below. There was a gap left over which needed to be closed with some decreases, and I wasn't excited about the work it would take to write that pattern in multiple sizes.
3) It took two skeins of Charisma to create one pair of slippers.

And that's when I decided to grab some worsted weight to try again with an easier design... 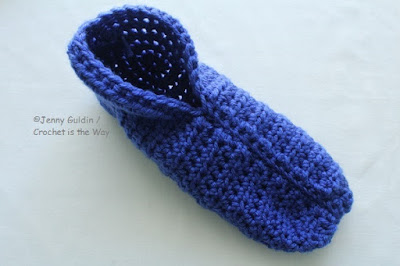 Nope, not pretty. But they are so comfortable! They're sort of like that one pair of pajama pants that you love to wear until unexpected company shows up while you're in them, and the next thing you know Aunt Cindy reaches out to pat your arm and asks if you've been drinking too much and are you feeling okay?...

Well, maybe you'll have a little more dignity in these slippers than those eyebrow-raising pants. Heck, wear them together with the pj's and be proud of the mess you are. What matters is being comfortable, right? 😉 Okay then. Let's learn how they're made: 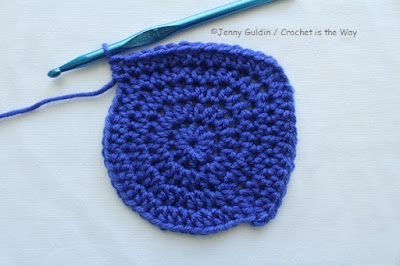 Begin by crocheting a circle that will reach from the middle of the heel to your ankle bone. Once you reach that size, you'll need to put two flat sides on the circle. 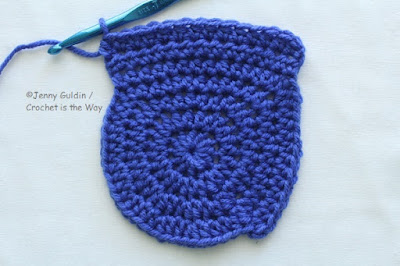 Now, turn and work in rows across just one flat side... 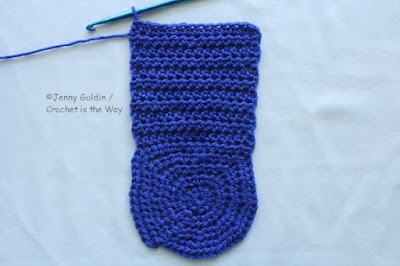 Keep working in rows until the length of the piece reaches from the heel to the base of your toes. 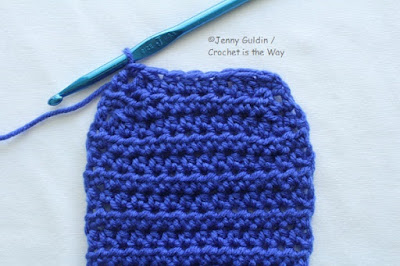 Begin decreasing. This pattern was worked in half double crochet stitches, so I used a dc2tog stitch for my decreases... In hindsight, I wish I would have used a sc2tog instead. The dc2tog left a bigger gap than I like. Although it's not so bad that (adult) toes would slip out, I just think the sc2tog would have blended into the pattern better. 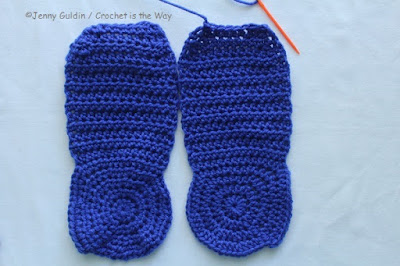 And now, here's the biggest mistake I made with this pair... You'll make two pieces for each slipper, then sew them together. I wanted to make one continuous seam, but I hastily bound off when I "finished" the pieces. Here's what I should have done to make that work: 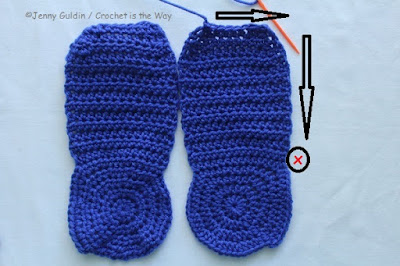 I should have worked back across and down the side, stopping at the "corner" of that first flat side. 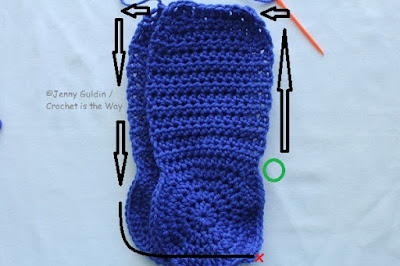 THEN bind off. You'll be able to use the tail to sew from the ankle hole, around the toe, down the base of the foot, then up the back of the heel; all using the same thread. In the end I just sewed them together as far as I could with the tail, then used another piece of yarn to sew up the toe and top of the foot: 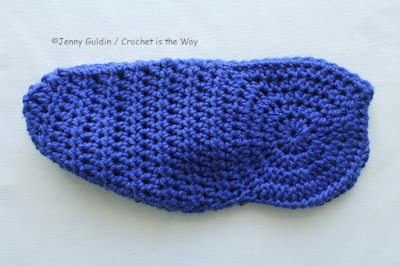 Mistakes aside, it worked and I liked the result... At first. The rounded heel fits perfectly; just the shape I was looking for. And that odd little jog where "round" meets "rows"? It creates some compression around the arch and hugs a foot in all the right ways. Although odd-looking off the hook, the whole slipper stretches for a snug fit and doesn't look so weird once you have them on. Just go back and see that first picture for an example. Not bad at all, right?

But once you take them off?... 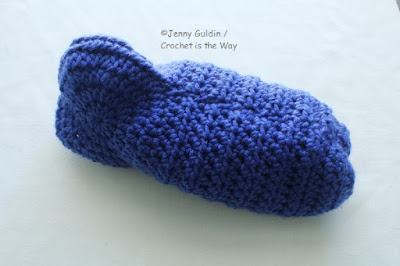 Oh, no. Put a pair of those in Aunt Cindy's stocking, and I bet she won't be asking any more questions about how you're feeling. She'll just be at the head of your "intervention" next weekend.

And that was the end of SlipperMania that day... But wait, there's more: The next day I sat staring at my stash and noticed I have a lot of Red Heart Super Saver in orange. I don't like orange and I don't know why I have so much of it in my stash. Why not use it for practice yarn so it doesn't hurt as bad if I end up throwing some away? 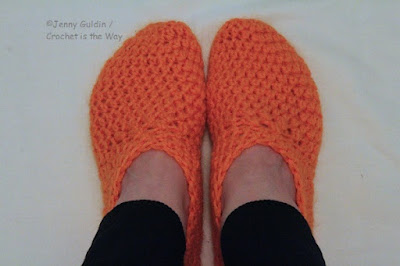 While I'm at it, why not abandon that idea of two-piece slippers and make some that don't have weird shapes or seams that require more attention than I'm capable of? 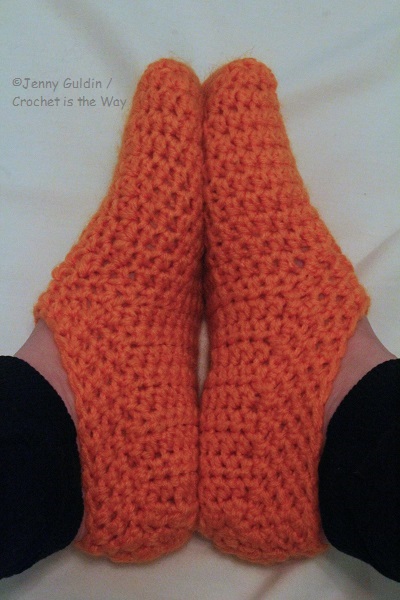 Yup, using that orange yarn was a great idea. These fit even better than those space socks I started with, and I think they use less yarn, too. You might notice that mine are a little dirty now because I've been wearing them out to the garage, not caring what the concrete might do to them because they're orange. I don't like orange, but I think I love these slippers anyway. 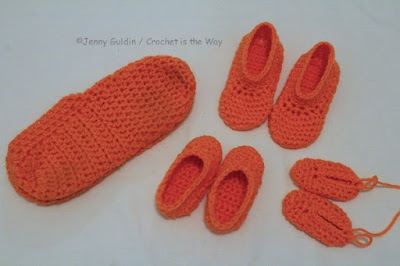 As for that one skein of Red Heart Super Saver that I was hoping to kill with a pair of slippers? Well, it also was used to make a pair of children's size, then toddler size, and finally a little tiny pair in a size that I still have to measure to label. And there's still enough yarn to make another adult pair. I realized that SlipperMania was a little out of hand, so I decided to take a break and show you my trials and errors before working on the pattern.

Then there was a delay in getting to this post because I just happened to try a different yarn (Hipster) and a few adjustments to make a really nice pair of stretchy socks. They were so nice that Rip van Winkle spotted them and said "ooo". Then he felt them and said "ohhhh", and I haven't seen them since... It must mean they're good socks if a mud-covered, truck-driving man decided he wanted them, right? (Just keep letting him think it was his idea; never mind that I was already making them in his size.) Perhaps they'll eventually turn up in the laundry so I can get some pictures to share in the next post. And hopefully my SlipperMania has calmed down by then so I can actually get to writing that pattern.