About five minutes ago, I was playing around with different blog themes after changing my text size. I've been meaning to increase the size of the text because I've received a few (friendly) requests. I'm more than happy to help you out with that... Once I remember how to do it! It all came back, but there's one big rule I forgot about: Never make important changes when TIRED.

So, I got distracted while I was playing with the colors of the text (of which I was only supposed to change size), and I selected some different themes to see what would come up for suggested colors... I think it's pretty cool how you can load a picture (or pick a theme) and Blogger will help you out with what will look good...

But I don't think it's cool that there's no "undo" button! I went back to reload my background picture when I was done playing, but it wasn't there. Since I still had a page open with the old background, I took a screenshot in order to copy the picture from there. (That file can be found two-un-backed-up computers ago.) With the picture cut off on both sides, there's no real hope of going back to fix it - It will never be the same.

I just hope you're happy! 😉 I started this blog back in 2012, and I've never changed the background for spiteful reasons... I received a lot of complaints in my first year, but none of them were like the friendly requests for larger text. They were hateful, rude comments, calling my background "ugly", telling me I'll never be successful, and other negative things that I've since forgotten through my stubborn determination to never change just because of what someone else says. 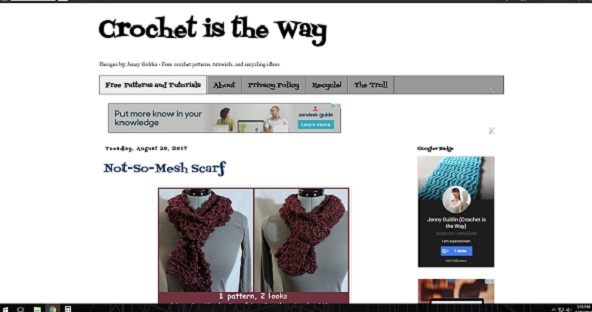 If only I could have been hard-headed enough to stop myself... "Just a little more work and I'll go to bed" I said at 9 o'clock in the morning as I published a new pattern and video... "Let me get to that text thing, first" I bargained at noon... "Hey, I wonder how it would look in this color" I thought about 45 minutes ago... And now instead of fighting to recover my background, I've decided to let go of the hate, stubbornness, and spite. Others shouldn't have to suffer just because of a few negative people. Maybe I'm just a little too tired, but I'm thinking the rest of the world could really use that advice right now.

Besides, I've been punishing myself as well. I always hated that background, too. But not because of the colors. It was due to the one thing that nobody ever did complain about... Those stitches were wrong-side-up. HA! I'm going to try to get a few hours of sleep now. Let's hope I actually do it before I accidentally delete the whole blog.