A Rug and a Bug

Are you familiar with the saying "snug as a bug in a rug"? That never made much sense to me... I would think a bug in a rug would always be in fear of being stepped on or vacuumed up... And that's how I feel now. Hurricane Matthew is nearing, and after yesterday's reports of "we're in no danger from this storm", I thought we'd be fine. But today the news has changed to "hunker down", and I'm pretty scared. I rode out Hurricane Andrew in south Florida as a kid. Over a decade ago now, we dealt with four storms (Charley, Francis, Ivan, and Gene) back to back in this area. Now living in a mobile home, I'm not ready for this.


And to top it off, I'm fighting another bug. I need my coffee to give me strength through this, but I'm strictly on tea. Okay, that's a bit of a lie, because I had some coffee earlier. But now I've switched to tea, because the coffee made me feel worse. (Lesson learned.) And before my coffee-deprived, bug-infested brain takes this post rambling any farther away from crochet, I should get to the project that's getting me through my fear of the coming storm: 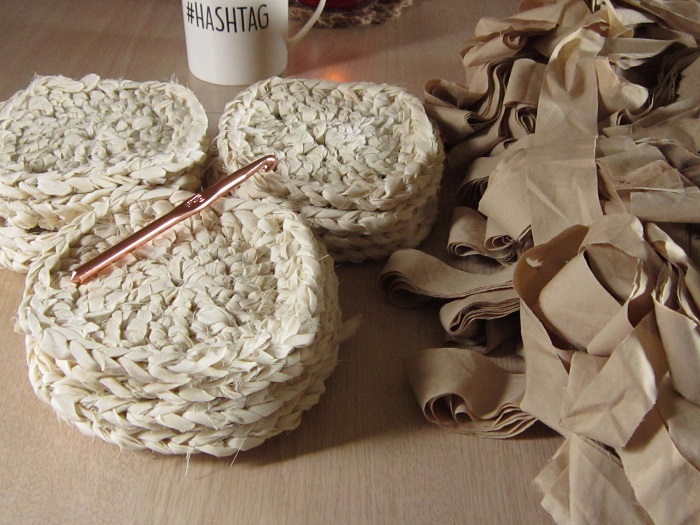 Progress! That's what we love to hear about, right? Forget all that whining. I finally sat down last week and cut up the next sheet that was needed for my fabric scrap rug. But progress was slower than I wanted, because I had a funny feeling that I didn't have as much material as I did when I cut up the first sheet. I was able to make twelve squares from the first fitted king-size sheet, with some scrap still left over. 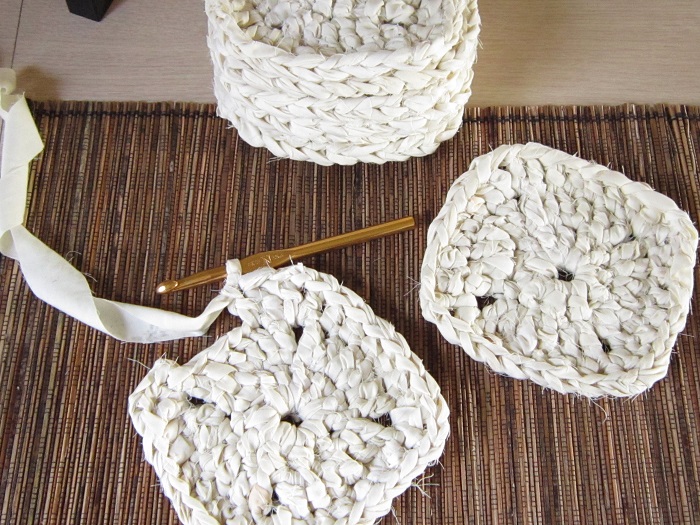 The plan was to make more of the same squares with a second color, and alternate them when joining. I took some of the material from the second sheet and created mock squares to see how the design would go: 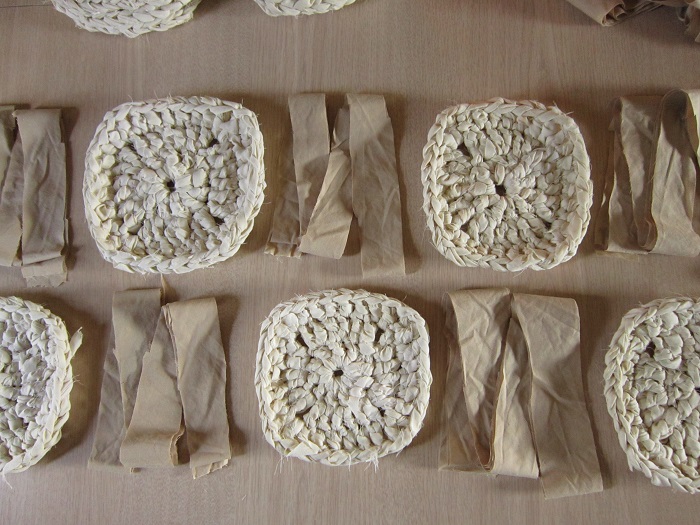 I didn't like the example as much as I had liked the idea in my head. If the colors were more contrasting, I think I would enjoy it. But this combination of off-white and beige squares just didn't appeal to me. Besides, with that feeling that I would be short on material, what would I do if I couldn't make enough squares?

So, I decided that I would use the second color to add more rounds to the existing squares. Again I used the strips to mock what the design would look like, and I liked it so much better. It was a safe plan, too, in case I ran out of "yarn". 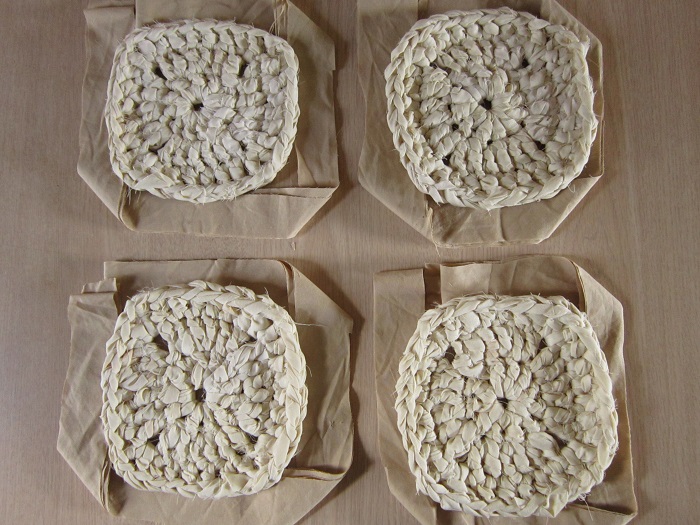 After adding one round to one square, I knew it would take about five strips of fabric to finish another round around each one. I sat down and joined the strips in little balls of five, and I became sure that I wouldn't have enough to do more. Still, I had planned on leaving each square unfinished, so I could go back and add on if my predictions were wrong. My coffee-deprived brain forgot that plan however, and I finished off one and wove in the ends. 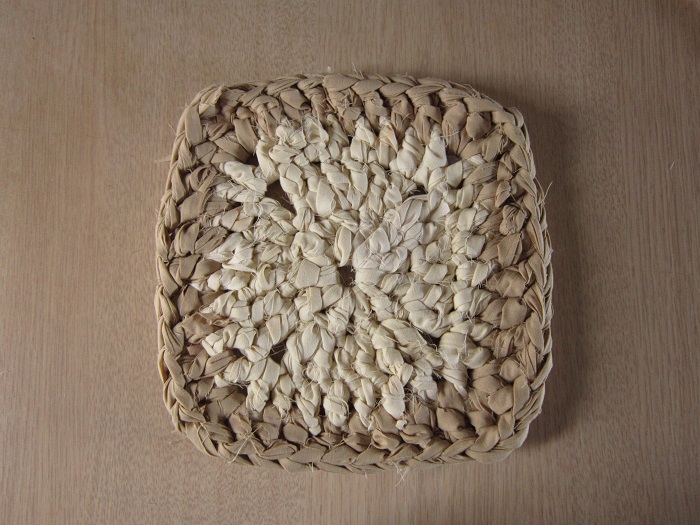 I had a minor face-palm episode when I realized what I did, but it didn't really matter in the end. Remembering to leave the rest unfinished, I worked one round of the second color around each square. Some ended a few stitches short of finishing, so it's a good thing I have some scrap left over. After working all the squares, this is all I have left of my pile: 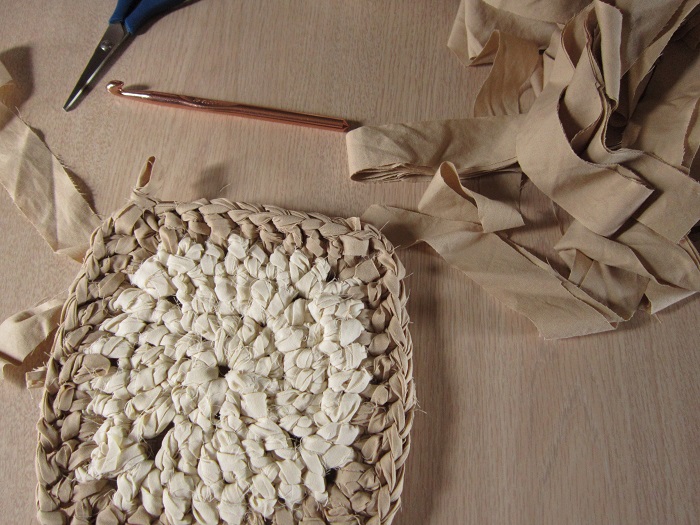 I didn't know exactly how many were left, but I knew it wasn't enough to continue. What about a round with a shorter stitch? One of my squares only used four of the strips I had joined, so I continued working a round of single crochet with it. I only got across one side of the square before it ran out: 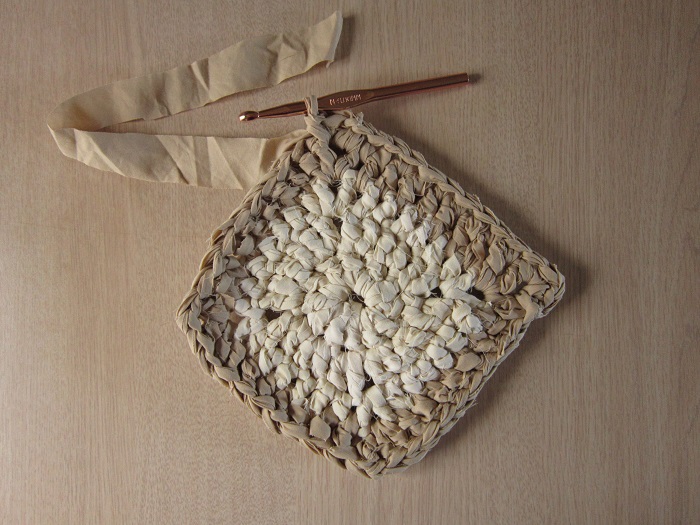 Now that I knew it would take four or more strips for each square, I counted the rest. Twelve left. Nope, not enough! I'm perplexed as to how two sheets of the same size gave me two different amounts of material, when I know I cut the strips the same width. It took six to seven strips to create each of the original squares, and I was left with scraps. If I could have finished each square in only six strips, then maybe the second color could have worked out. But it would have left me with absolutely no margin for error. 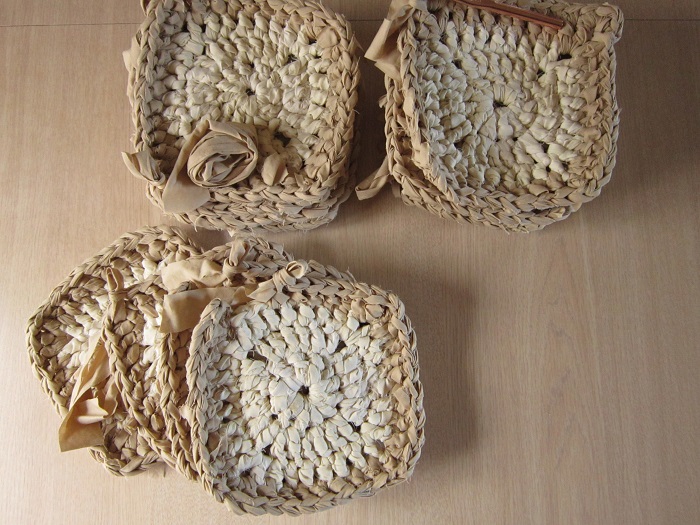 The next thing will be to cut up a dark blue sheet for joining these squares. I considered using the join-as-you-go method, but I think I'm going to stick with the one-seam join that I love. I'm a little disappointed that my rug will be smaller than I planned, but I don't have a choice. The only other scrap sheets I have are different kinds of fabric - Flannel and microfiber. The flannel is saved for another project and doesn't match this color scheme, anyways. And cutting up microfiber for fabric yarn is an adventure I've yet to tackle.


I had a bunch of things planned for this week - Publishing the pattern for the Love Knot scarf I made, working on a tutorial, and putting the final touches on the pattern for that cowl that kinda got forgotten already... But honestly, this cold knocked all plans out of me. The most of what I'm doing is curling up under my fluffy blanket and crocheting when I'm not shivering.


But I'm still keeping an eye on the skies and an ear tuned to the news, because reports of devastation are already coming through. There's no doubt that Hurricane Matthew will be bad... The uncertainty is where it will be the worst. They're forecasting up to 60 MPH winds in my area; worse on the coast and to the north. We already have six inches of water under our house, and we often lose electricity in high winds. You might not see me until next week!

So in just in case that happens, I'd like to say now that I'm thinking of those in the path of the storm, and others already affected by it. Please be safe. My anxieties and thoughts for you all will be poured into my stitches until the storm passes. When I really can't do much other than worry and wait for news, at least there's still that good old yarn-y comfort to turn to.


Update: I'm back! We went to stay with my dad for the night while the storm blew through, and most everything turned out fine for us. There's been a lot of cleanup going on around here (just yard debris) amid lots of mud. I'm mosquito-bitten and tired, so I probably won't get back to crochet or posting until the weekend is over. But thankfully that's all we have to worry about. We're still keeping those affected by (and still in the path of) the storm in our thoughts. And let's all hope it doesn't make that loop back to us.
- October 05, 2016 No comments: